Who Is Killing the Honeybee? Part I

Posted on February 13, 2014 by aheronsgarden

Not I, says the gardener. 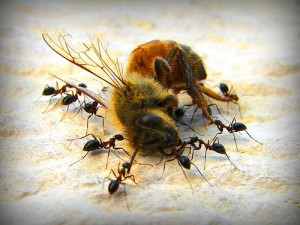 …To dust, with poisons in its body?

In the past six years an estimated ten million beehives worth $2 billion have been wiped out. Beekeepers worry that one bad winter (this one?) could decimate an already weakened bee population. Pretty scary. I like my apples, blueberries, cherries and almonds.

Environmentalists and many scientists claim pesticides are killing bees outright or weakening their immune systems and making them more susceptible to stress. Chemical companies blame bad weather, poor nutrition, disease, parasites, and loss of habitat. The EPA wobbles and Congress is not expected to take any action on proposed legislation.

Immigrant honeybees lost no time establishing their own feral colonies in the new world.  Photo by Bob Horn

This is sad because these immigrant honeybees have been faithful partners to colonists since Jamestown was settled. Despite harsh climate and forbidding landscape, settlers and honeybees embarked on a grand American experiment that stretched from coast to coast, enriching our food supply and creating a thriving agricultural economy.

Ah, but then there was Progress. Great cities, green chemlawns, highways and  high rises, fracked wastelands and mountaintop mining, efficient monocultures, and imported exotics with anemic bee-appeal. Today, honeybees and other pollinators have to ferret out fly-in cafes for nectar and pollen. Is this any way to treat a partner?

And what role have I as a gardener played? Ally? Adversary? Maybe a little of both?

Certainly not partner because I never thought much about honeybees in my garden. My goals (if I had any) did not include banquets for honeybees.

Our property was originally a wild Hansel-and-Gretel dark woods, not at all a bee cafe, though I hardly missed bees in the face of ravenous chiggers. We longed for visual order. Isn’t that part of what gardening is about? So we planted old favorites that were orderly: azaleas, camellias, hydrangeas. No bee magnets here. But these plants didn’t die and they were tidy. And that was important to me. 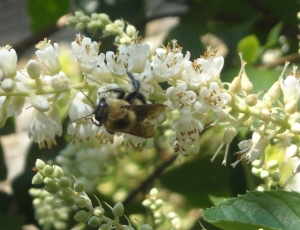 Other plants we chose happened to be discos for the bees. They were exuberant growers and bloomers and needed gardener-control. Dwarf-not-so-dwarf burford holly bloomed in spring, glossy abelia all summer, and native summersweet in late summer. We always knew when bees clustered on a plant they liked because the plants buzzed.

What buzzing! (Comfortable bee-chatter? Is that what’s behind the term “quilting bee?”) We liked hearing the chatter. We developed great affection for these plants, even accepted their untamed joie de vivre, as we followed the buzzing around our garden. It became white noise that signaled, “All’s well in the garden.”

The story should end on this triumphant note. But it does not.

In Spring, 1999 we heard no bee buzz. Must be they’re a little late this year, we said when the holly was silent. You’ll see, they’ll catch the glossy abelia in a couple of months. But they did not. As seasons moved on and honeybees did not greet their blooms, we had to conclude that they were gone. We missed the hum.

Ironically, instead of silence, we should have been hearing wild bee choruses because we had begun to plant what bees like. It’s not that we were so smart; we simply wanted more variety in the garden. Serendipitously, we began to carve out niches for salvia, black-eyed Susan, aster, verbena, penstemon, obedient plant, mistflower, monarda, catmint, joepyeweed. 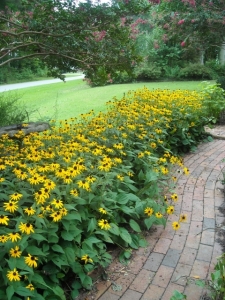 Rudbeckia, here an avenue of nectar and pollen

You know them, the kinds of plants that are positively joyful. But they are not particularly shipshape. They topple, sprawl, invade, seed in, disappear on a whim, send invitations to weeds to join them, or, surprise! succumb to furry marauders in a day. The kinds that encourage neighborly comments about declining property values.

But they are the kinds of plants that honeybees love. They are fly-in cafes, sunny patches of meadow, maybe combined with some woody plants, that offer a smorgasbord of nectar and pollen that keeps bees healthy and promotes strong, thriving hives. High contrast to that honeybee desert, the green lawn.

Native pollinators love these plants even more than the bees do. We may have lost our festive honeybee parties, but today bumblebees, solitary bees, flies, wasps, butterflies and moths, and sometimes lacewings are quietly working our flowers for nectar and pollinating plants as they work.

Many of them have spent their youth as larvae feeding on trees in those Hansel-and-Gretel woods we could never bring ourselves to cut down.

Our handsome native sweat bee is attracted to. . .well, you know, but he picks up pollen and sips nectar, too. Michigan State U

What gifts these creatures bring. Our garden is alive in summer with quiet humming and antic mating. In fall and winter, wild blueberries, holly berries and crabapples feed our resident birds. And all this comes with a bonus: the larvae of many of these pollinators attack insect pests.

I can’t promise that bee cafes are as easy to manage as hydrangeas. There are no rigid formulas for maintenance, but that mystery becomes part of the game. Whenever I visit these little, whirring worlds to work, or just to get a closer look, I feel like I’m uncovering secrets that I could never find in a book. My weeding becomes a path to discovery.

Wouldn’t it be wonderful if a lot of us gardeners set aside a piece of our yard for our native pollinators. Fortunately, there’s good information available from university and botanical garden websites, and county cooperative extension agents have good resources.

But there is more to the story than creating new habitat for pollinators. Pesticides are taking a toll. Are we gardeners accomplices?

1 Response to Who Is Killing the Honeybee? Part I