4. The Hydrangea that Climbs

We saw a grand old specimen in flower in New England many Junes ago and we had to have one. But my, what a long trip before it finally arrived in style. We have some recollection of there being a series of pleas and commands on our part that finally escalated into threats before the plant began to behave. 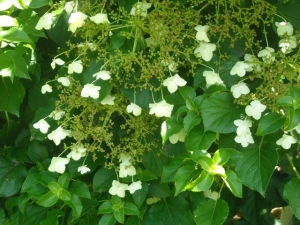 Mind you, this is not a fussy plant. Fairly rich, well drained, moist soil will make it happy. We were pretty sure that clay soil in a swamp was not what garden books would recommend, so we did the best we could. We planted it on the upland side of our low-lying property. We were generous with compost and extravagant with optimism.

During the first few years of its life, before we learned patience, we gave it a little fertilizer annually, some water if summers were dry, along with some vague, or not so vague, threats concerning its pokiness. Frankly, we think it was the threats that got it going.

North of our zone 8 garden, shade is not so necessary, but in our climate it should have the comfort of afternoon shade. Ours has to tolerate full sun. No, you can’t pin this goof on us. We chose a spot with lovely bright shade, but one storm or another toppled the sturdy parasols, so our scrambler had no choice but to adapt. As we said, it’s not fussy. Just give it some threats.

About the time our vine started to settle in, Japanese beetles skeletonized its glossy leaves. That was too much to bear. We faltered. We relaxed our ban on pesticides. The following spring we sprinkled Merit,* a systemic insecticide originally developed for roses, on the ground around the plant before new growth emerged. Like magic, the beetles were banished. (See comments on Merit below.*)

By summer’s end blooms have shut down, new stems are growing, and buds are forming for next year’s blooms

After five years of waiting, we found three blooms. We counted them—again, and again. Just double checking, mind you. The count never changed, but hope was alive. Apparently, our rambler had reached its critical mass for blooming. Since then, as it has expanded its territory, the show has become more magnificent each year. Fickle gardeners that we are, threats have given way to pride of ownership. 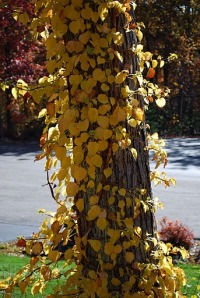 Colonizing an oak tree in New Hampshire, this vine is a bright yellow show in fall

The flat-topped blooms in May look like frothy Queen Anne’s Lace. Tiny fertile inner flowers make seeds for new plants. Showy outer sepals, flashy beacons that draw bees and other pollinators, give each bloom its pizzazz.

We probably didn’t give our plant enough space. Yes, you can pin this one on us. It rambles over and through a four-foot picket fence, grabbing on to pickets with strong rootlike holdfasts, ranging about ten feet in ten years. Is it holding the fence up or is the fence holding it up?

Now it’s looking for more territory, growing outward, creating nooks for blossoms to grow and hide in. Lovely, but it’s threatening the path. In a role reversal, we now plead for it to slow down and actually prune it back, judiciously, of course.

We say judicious, because climbing hydrangea can be a scary plant. Especially in winter when leaves are gone. Old trunks are grizzled with dark hairy roots and exfoliated gray bark. Younger trunks shed great cinnamon strips. New growth of the year, maroon branches tipped with pale pointy buds, look like witches’ fingers beckoning the unwary into a maze of old blossoms and twigs from which there is no return.

It’s a Stephen King fun house that closes down each spring when glowing new leaves and smashing blooms stage another show.

A new season of growth begins

And we remember how long we waited. And how much patience we learned.

*Merit is a systemic (taken up by the roots into the entire plant) pesticide that is highly persistent in the environment but with relatively low risk to mammals. It contains imidacloprid, a synthetic version of nicotine found in the leaves of tobacco plants and their relatives.

Neonicontinoids are highly toxic to honeybees and are implicated in Colony Collapse Disease. Their use is restricted in some countries in the European Union. In America this class of pesticides is widely used on corn, soybeans, orchards,  lawns and gardens. Commercial beekeepers have recently filed an emergency petition with the U.S. Environmental Protection Agency (EPA) to suspend the use of clothianidin, a member of this class. For more on this subject, see Honeybee News.

The Hydrangea that Climbs

Why Don’t My Hydrangeas Bloom? Part I

Putting the Blue in Your Hydrangea Blooms

Letter to Lovers of the Blue

1 Response to 4. The Hydrangea that Climbs