On a clear day. . .Lakes of Clouds hut, highest in the chain

Get some ice on your ankle immediately and keep it raised, advised the crew chief. Where do I find the ice? We don’t have any here. Oh.

We had rounded crusty old Mt. Monroe and come upon Lakes of the Clouds hut nestled in crags, an oasis to our eyes, though there wasn’t a tree in sight.

The hut’s water and sewer systems with composting facilities, were clearly visible and could handle up to 90 guests each night during the summer hiking season. 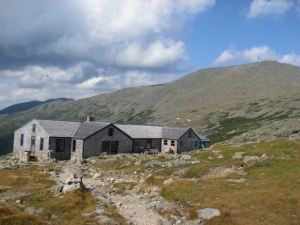 Our view of the hut as we approached it. We never saw Mt. Washington behind it. Too many clouds

Richard (yes, Richard and Bennett were sharing our bunkroom again) had managed to find some gel-ice that helped cool my fast-swelling ankle.

Being an invalid I could finagle the luxury of a first-tier bunk. I reveled in the warm, noisy hut, a full house tonight, with kids scampering between bunkroom and gameroom.

Color color color everywhere. Noise and people and laughter were pushing away the silent gray mountains and mists.

Lakes hut from Mt. Washington, base of Mt. Monroe and tundra garden also seen. A speck in the wilderness

Neither Megs nor I relished the idea of punishing knees and ankles with a downhill hike to the car. While I lounged, Megs looked for alternatives to our original plan.

We have three choices, she reported. My eyes brightened with visions of golden chariots door-to-door.

First choice? Go back the way we came.

View of trail from Lakes to shuttle. Lots of fanny-sliding on that one.

A three-mile downhill hike to pick up a shuttle.

A shuttle? A shuttle? Now we are talking. Maybe not a golden chariot, but it would be a ride. Sounds great.

Here’s the hitch. The trail is steep and treacherous. Thunderstorms are predicted for tomorrow so the rocks will be slippery. It took one group nine hours in the rain. Three days for us, I mumbled.

So, what’s the third choice?

Packing supplies down from Mt. Washington to the hut

What? That’s almost 1300 feet up in a mile and a half. Over rocks. Out in the open. We’ll be blown away. We’ll be struck by lightning. That’s crazy.

No, seriously. It’s not supposed to be a bad trail. The crew takes it three times a week to get supplies. They carry 90-pound packs and it only takes them an hour and a half.

Yeah, but they don’t have to stop and rest every half hour. At our pace it’d be midnight before we got there and we’d get arrested for trespassing after hours.

Empty now, but noisy and jolly during meals

Megs ignored my ramblings. They say we can catch something at the top to get us down.

Would it take us to the car? They weren’t exactly clear on that point.

Megs’ walking stick became a cane for me as we made our way into the noisy dining room for yet another hearty dinner of soup, bread, baked haddock, salad, rice and vegetables. (I told you food was important to us.)

Raindrops streaked the steamy windows, but warm, bright conversation surrounded us. Bunkmates Eddie and Susan, engaged to be married were very much in love. Strangers to us yesterday, friends today because we’d shared a mountain trail.

Despite his experience, or because of it, Eddie had infinite respect for the terrain and infinite patience with Susan.

They couldn’t imagine their mothers doing any of this, they said, which made us feel like a million bucks. (They probably couldn’t imagine ever being sixty, either.) Their banter brought back memories of our own courtships many years ago.

The crew was singing Happy Birthday. In the dusky light of the hut, the candle on the cake glowed. Whose birthday? Richard’s! Bennett had arranged the celebration. Dad told us later he chided his son for bothering crew members, but there was undisguised love and pride in his eyes.

Lonely out there, cozy indoors

Surprise birthday celebration notwithstanding, it was early to bed for Bennett. No ghost stories or carousing with the other kids. Tomorrow they would be hiking eight miles to the Madison Hut, and it would probably be raining.

And we wimps were balking at a mile-and-a-half hike.

In fact, it rained all night. The mighty, crashing, booming mountain thunderstorm that was a show stopper according to Megs, had blessedly arrived ahead of schedule. I, who claim never to sleep a wink, slept through it all, lulled by Bayer’s magic pills. Good solid respite for tomorrow’s hike.