And then Autumn exploded. Wild. Brilliant. Exuberant. Dogwoods, maples and tulip poplars–those that still had their leaves–preened bright yellow in bright sun.

Leaves of spirea japonica — dowdy, white-blooming mail-order mistakes we tolerated because they reined in the leaners behind them — erupted in a fountain of gold. Shame on us for being plant snobs. 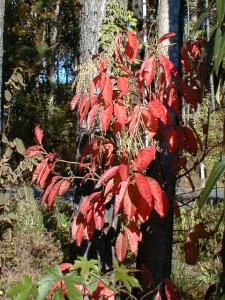 Virginia creeper leaves, tossed about by the storm, change to vibrant red on cue

Even smoke bush, a sad sack by summer’s end, sprouted fresh leaves cast with rosy tones. Seedling impatiens went wild along the paths, and plants bloomed out of season. Was it the combination of sunny days and cool nights? Was this how plants in full sun usually act? Were plants racing to insure survival after a catastrophe?

Elderberries wait to be devoured by the mockingbird

We had little time to ponder. Isabel’s winds were gone, but her missiles were still dropping out of the sky. Branches. Pine cones. Acorns. Hickory nuts. Any captive of a tree crown seemed ready to fly on a whisper of a breeze, or on no breeze at all. Without provocation, an errant branch would split from a tree and plunge into the earth like a stake. Happily, we escaped being impaled.

Random. Unpredictable. Near misses. Henny Penny would have had a nervous breakdown. We should have been wearing hardhats. 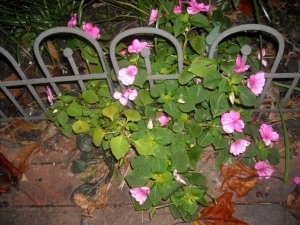 But we weren’t. We were invincible. We had survived a major hurricane. Our home was snug. Our sense of purpose, however unframed, was propelling us through the herculean job of making some sense of the disorder.

The flambuoyant color that surrounded us gave no hint of the cold season of departure and surrender that was to come. Instead, this many-hued autumn glowed with the flush of rebirth.

The mask of color and new growth that surrounded us distracted us, happily, from grasping the ways such massive losses would change the garden. We’d 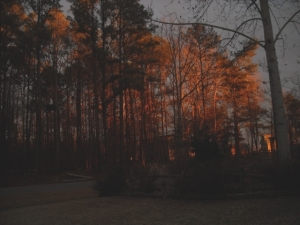 The western sun catches these trees, but only for a moment

already counted 50 trees lost. It was becoming difficult to keep track. Final numbers would be closer to three times that and the clearing would take months, even years. Some downed trees would become a part of the garden, testimony to a wild time in our world. But we would not think ahead. Life was good now.

Most of the tall trees that remained could not participate in the joyful post-hurricane fling. Their leaves were shredded or missing. It would be a long winter for them, and a long time until spring buds would soften their harsh silhouettes.

On clear nights, though, the garden would be lit softly by reflections from a bright starry autumn sky, and the scars would fade. We took heady pleasure in watching the sky unfold above us while the broken garden slipped away.