Posted on December 28, 2013 by aheronsgarden

Twas the day before Christmas and all through the yard

We were setting out bulbs ere the ground got too hard

When from down on my knees I saw, slowing en route,

A rosy-cheeked elf in a natty red suit

He seemed quite astonished to see me a-muck

And asked, kindly, if I were down on my luck

No, I’m planting for spring said the believer in me,

Would you like some, dozens and dozens, all free!

He pondered. Thank you, said he, most polite,

But I think I would much prefer tea.

Before I could blink he was back on the wing

Merry Christmas he called, Have a magical spring.

Apologies to Clement Moore, but it’s our best excuse yet for why holiday gifts aren’t wrapped, cards not sent, baking put aside. As for the flower bulbs, hundreds, most free, they have been duly planted and await demolition now and later, during that magical spring, by deer and squirrels.

Visions of tulips in Holland’s fields

Mostly tulips, some daffodils, they were an unexpected Master Gardener perc. How could I resist these homeless waifs being passed over by practical people who were smart enough to know they would not enjoy cultivating backaches on nasty, wet wintry days for the privilege of providing fodder for wild animals.

Kids might have visions of sugar plums dancing in their heads (more probably Ipods these days) but I see waves of tulips adrift in my beds come spring. Vibrant reds, yellows and purples, soft pinks, pure whites. But pulling off that magical spring performance? That will require due diligence and wily strategy.

I was reasonably careful about collecting chaff and paper skins left from the bulbs after planting. There would be no advertisements for subterranean platters of bulbs, and, for added insurance, I hid disturbed patches of soil under compost or blankets of fluffy moist leaves. But no wire baskets and no wire embedded in the soil. Much too much work for a poke-and-plant gardener. Nor did I fertilize. I will soon, preferably timed before a rain that will wash chemicals down in.

Tulips at Keukenhof Gardens in the Netherlands

I think some fertilizers lure squirrels with siren songs (or odors): Soft Ground, Good eats, they promise. Or maybe it’s just easier for squirrels to bury the nuts they’ll never find again in soil that has been conveniently loosened by a serf in sweats. Even the occasional distasteful daffodil, probably planted in good soil in haste by the tired serf, has been discovered tossed out of its berth. 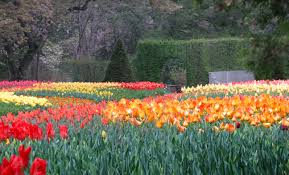 Am I kidding myself with all these do’s and don’ts? Note the word occasional above. Mostly, these bulbs went slam-dunk between roots into pried-up muck that was then slapped back down in place. (Remember, I said I took pity on the waifs; that does not mean they get royal treatment during mass planting.)

To accomplish this with relative ease Bob ground a point on a narrow trowel. Delighted with the modification, I’ve poked, sliced, slapped and levered that tool into the ground up to its hilt so efficiently I managed to break the weld on the trowel. Now I will have to plead with our local automotive genius to reweld it in his shop.

The point is, if the ground is so packed and muddy, will any self-respecting squirrel dirty his paws for a tulip bulb? Probably not, and I’ve got garden proof. Not two days after planting, I found my carefully deposited compost combed through by paws as far down as the muck but no further. The bulbs were not disturbed. 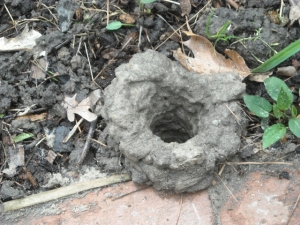 Charlie Crayfish has built his “castle” not 20 feet from my tulips, reminding me of what our soil is like beneath the compost

So I can still dream my dreams. Now, if my dreams begin to flower I’ll have to be sharp-eyed as Brer Fox and canny as Brer Rabbit. Bars of Irish Spring soap cut in half and poked on a stick in the ground seem to steer deer away from favorite spots, though I think squirrels like to gnaw the soap. If I’m thinking funky-country I tout the bars (tongue in cheek) as the latest in garden décor. Otherwise, I tuck them low in the foliage of shrubs and perennials. 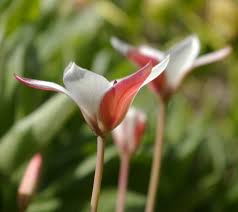 For added ammunition I use Imustgarden animal repellent. These products have a fresh, minty appeal that can almost pass for pleasant. Unlike other deer repellents I have used, the flies don’t follow me around during application. What, exactly, I will do next spring is still a mystery to me.

Sigh…All this work for a passing parade. None of these Dutch hybridized varieties are long lasting here. More practical to try the smaller, less showy tulips that stick around, which I have done, and yes, they are smaller and less showy. I can’t help it. This year bigtime tulip-mania caught up with me. What a show they will put on. Won’t they?

This entry was posted in Planting Tulip bulbs and tagged animal repellents, planting tulips, squirrels and tulips, tulips in gardens. Bookmark the permalink.