The Sweethearts and the Culprits

Those knock-out blooms and shiny, classy evergreen foliage were what seduced us.

Certainly not any intention of attracting wildlife.

So we never thought about bees and birds, or deer and voles taking advantage of our camellias.

Which is understandable, because camellias come from the orient. Much as they are at home in our gardens today, they are alien to native wildlife.

But our native wildlife is opportunistic and camellias have gifts for wildlife on the wing, if they seek it.

Camellias bloom when the garden is brown and the weather is chilly and the world is napping. Those occasional balmy days that break up cold weather stretches are like dinner bells to torpid bees and ants.

Nectar from camellias, sometimes the only flowers in bloom,  gives honeybees a head start on spring feeding after a long winter.

Even ants are getting into the nectaries of C. sasanqua ‘Winter’s Interlude’

In early spring bumblebees, honeybees and natives forage among the pollen-rich anthers of late-winter-blooming Japonicas.

On sunny autumn days, we’ve seen the lone migrating monarch,  dancing yellow sulfurs and an occasional late swallowtail, one that may have recently stretched its new wings, investigate fall-blooming Sasanquas for nectar. And honeybees, too, are out for a late sip of nectar and gathering of pollen before winter sets in.

Their fly-bys and landings must be  successful, or they wouldn’t keep coming back.

Just look at these stamens of  C. sasanqua ‘Yuletide,’ a Christmas-blooming camellia, bursting with pollen

Here’s where choices matter. Those large, come-hither blooms overblown with petals are not the first choice of insects.

The anthers that hold the pollen are often hidden and the structure of the flower can be so complicated that bees-on-a-mission can’t spare the time to figure out how to extract either nectar or pollen.

Best choice from a bee’s perspective is a simple blossom — you’ve probably seen them — the ones with bright yellow stamens that stand out from a single halo of petals.

Simple flowers may also have a greater offering of nectar than their flouncy cousins. In large, complex blooms, nectaries may be reduced to compensate for the energy it takes to grow an added burden of petals.

This large and somewhat unruly C. japonica ‘Berenice Boddy,’  an early-blooming  favorite of ours, makes a cozy hideaway for small birds

Leaves on camellias count, too.

We may admire those handsome, glistening evergreen leaves and thick lush growth from the comfort of our easy chair,  but for over-wintering birds they provide essential cover from wind and haven from hawks.

It is not unusual for us to open the door on a chilly day and see flocks of small birds startle and fly out of shrubs where they had been loafing contentedly.

In a community near us, we know a gardener whose wife feeds the deer. Somehow that sounds like an oxymoron. But there are ways to make this work.

We try to remember that deer will usually take the path of least resistance to find food.

In that same community, where deer seem to feel especially welcome (I wonder why), they have methodically chomped the leaves and twigs of every camellia around.

Our deer can defoliate large plants up to a height of about four or five feet, not much more, because they rarely care to stretch for a meal. Plants may look like eyesores but…

Fawns, appealing though they may be, seem to taste everything, camellias included

Not a tragedy! A little judicious pruning  and you can turn that eyesore of a shrub into an attractive ten-foot tree that becomes too much of a chore to chomp.

When we want to create a small tree, we remove scroungy lower branches and odd leaves up to the height of deer browse.

We remove stubs close to the trunks, then select two or three  upright trunks and prune out the others.

Finally, we shape the limbed-up shrub by removing unnecessary branches and thinning if necessary. The crown may seem out of place for the height of the tree at this point, so we usually wait for a couple of years of growth before we do more judicious shaping, if we feel the need. We also check the shrub occasionally for whiskers near the base and do clean-up pruning.

As camellias age, especially when they reach the century mark, they tend to lose their lower branches and become trees.  So this type of pruning  is not so radical. 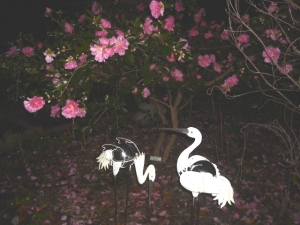 We frequently use this technique of limbing up to create small trees out of shrubs that over night, it seems,  have grown into large green lumps behind our backs.

The goal is to make the plant so attractive after we’ve pruned that a visitor will assume this stunning specimen was planned from the beginning.  Only the gardener knows otherwise.

Now we have a canvas underneath for growing deer-resistant ground covers like ferns or Solomon’s Seal or epimedium, or deer-resistant annuals like impatiens. Easiest of all, is a two-inch layer of pine bark mulch, or a less formal leaf mulch.

Limbing up a camellia should not affect its ability to bloom profusely. (‘Shoa noa saki’ featured in above photo)

This is not a solution for newly planted, small, or weak camellias. They are first targets. We’ve seen them browsed to death.

Sprays work well. But when I used them I had to train myself to be thinking about the weather and the plants all the time.

I dared not procrastinate or forget. And, frankly, even a garden fanatic like me doesn’t want that pressure.

So we do one-time prevention. We put single specimens in a four-foot-high cage of green-plastic-coated turkey wire, or we temporarily fence a few plants with material that’s five feet or taller. Not attractive in our natural woodland garden, but it’s not forever.

A round of hardware cloth, screening, or deer fencing for a couple of years until the plant gains stature and strength may mean the difference between life and death for a young camellia.

Mahonia bealei, or leatherleaf mahonia in a natural setting.

Blocking a deer path is another tactic we’ve used. Sometimes all that’s needed is a short length of fencing between trees or a strategic planting of an undesirable (to deer) plant.

We’ve planted Mahonia bealei between pines on a path that deer tended to follow. It’s a stiff, narrow-growing, spikey plant with bright yellow blooms and dark blue berries in spring.

It happens to be daunting to deer and behaves itself in our garden, but in some southern states it is invasive.

These tricks don’t keep the deer off our property, but it does force them to look for other paths that may keep them out of camellia beds.

We have had active herds of deer here, but they have done little damage to our camellias. In fact, they stroll along paths that wind through our camellia beds and create their own deer paths along edges of our woodland beds — without touching the camellias! 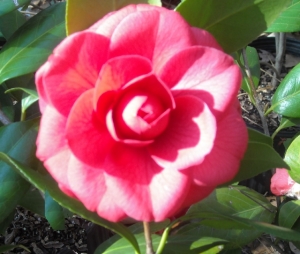 Yes, we’ve lost a few camellias to deer browse, but we should have lost many more. We are beginning to suspect that the  horticultural oil Bob sprays once or twice a year to combat tea scale may make a difference.

He is careful to drench tops and bottoms of leaves, so the plant is fully treated. (See Insects and Diseases of Camellias).

Perhaps the oil leaves a residue that is not appealing to deer. If so, it is a serendipitous solution.

Neem oil, though we have not used it, may be even more effective. It works like horticultural oil, smothering chewing and sucking insects, but it also leaves residue of a chemical that seems to deter insects from eating. Would deer respond in kind? Worth a try if you are overwhelmed.

We were congratulating ourselves on outwitting the deer, when, from subterranean depths, pine voles invaded. Tricky little devils, they used old mole tunnels to get around. No digging involved. 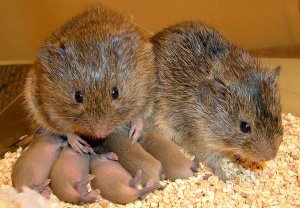 Smithsonian photo of prairie voles, similar to our pine voles in their reproductive capacity

First they devoured tulip bulbs and roots of perennials. A lovely row of astilbes along a fence suddenly wilted. Stems came up in rootless bunches. After that the voles went big-time. A five-foot nandina toppled, bottomless, roots cut to the quick by the roto-rooters.

Did you know that a vole can eat its own weight of plants in a single day, and that a mother vole can have more than 10 litters a year, with up to 10 kids at a time?

When these kids are a month old they can have kids of their own. The math boggles the mind. And they all  seem to gravitate to gardens.

One of our favorites, ‘Hermes’, that we didn’t want to lose to voles. Note petal tip browned by frost as bud began to open

We knew voles were attacking camellias in the Norfolk Botanical Garden. Would our camellias be next?

No sir. Not if we could help it.

Figuring the voles wouldn’t go for bruising their tender noses by digging among sharp stones, I collected gravel from the sides of our crush ‘n’ run road. Bob dug it in around the plants.

Did it work? None of our camellias ever wilted or toppled.

That was a primitive solution. Later we would find out about VoleBloc, or Permatill, a kind of gravel that when worked into the soil, will deter voles.

At one time, so many young camellias in the Norfolk Botanical Gardens had been lost to voles that new camellias were put in special wire baskets before planting. Much too much work. VoleBloc was more efficient, but also more expensive than road gravel. 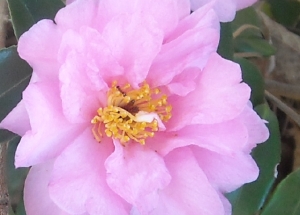 Lots of barely noticeable insect activity here, so we limit poisons and sprays

Poisons like mothballs and coumadin are available, but we’ve never used them. Who knows if the target vole will snatch it or if  an unsuspecting innocent will be tempted, or a predator poisoned by an affected vole.

If we let nature take its course and have patience, cats and foxes, snakes and hawks, are star players at vole-control without upsetting a fragile ecosystem. And maybe that is what finally happened.

After several years of vole-havoc, the voles disappeared. Maybe they’d moved on, or maybe resident cats and foxes rose to vole-patrol challenges. This all happened several years ago, and we are hoping this long and deep dip in their numbers will continue.

Not in our woodland garden, fortunately. They use the trees as a trapeze, and they consider our bird feeder a second-rate Olympic hurdle,  but they have not touched our camellias.

This is my kind of squirrel

They can, however, be maddeningly persistent about nipping buds and blooms, then tossing them.

A friend recently sent me a picture of the single bloom she had finally rescued from a camellia she’d gotten from us — three years prior.

What forbidden (in our view) treasure draws them?

Perhaps nectaries at the base of each bloom provide desserts for squirrels with a sweet tooth. They are quick to toss skeletal blooms aside after plucking them.

Closing out the bird feeder is one way to discourage them from visiting the garden. Pepper spray, dogs and cats may keep them at bay, but they are wily critters.

At least we don’t have groundhogs (woodchucks) or porcupines. . . not that I’ve heard, lately. And the beavers seem to prefer chewing native trees. 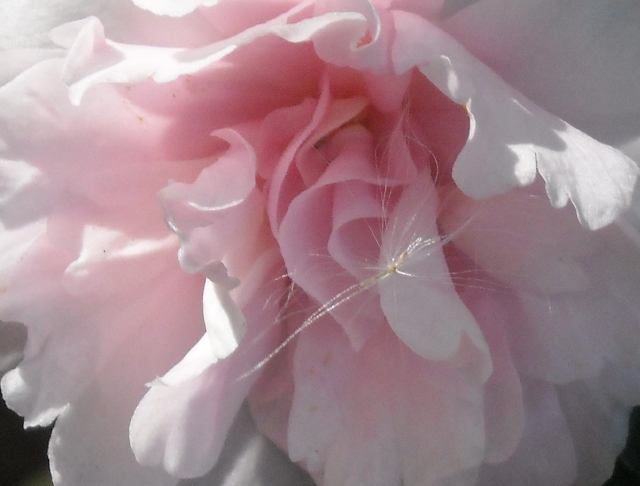 Portrait of a spiderling caught on ‘Winter’s Interlude’ in fall. How far had it ballooned above the landscape, carried only by its own spun gossamer parachute, before it drifted on to this flower? Will it find a meal? Back in 1868 Walt Whitman, in his poem about the soul’s eternal search, paid tribute to “A Noiseless Patient Spider.”

Camellias in our Garden      Siting and Planting Camellias

Pruning and Fertilizing Camellias     Insects and Diseases of Camellias