Who Is Killing the Honeybee? Part II

Posted on February 14, 2014 by aheronsgarden

Pesticides and Who? Us Gardeners?

Have you ever wondered why some nursery plants you buy look so perfect and stay that way all season? (Assuming they live through the season in your garden — they don’t always make it in mine.) 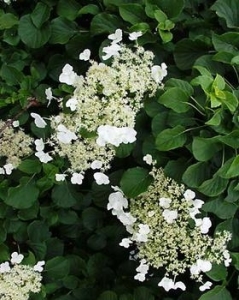 Many years ago we were successfully coaxing a climbing hydrangea to bloom. About the time it was finally performing, the Daily Insect Gazette telegraphed the news, probably gave directions, too. Japanese beetles descended to skeletonize the plant.

An ag supply friend told us he had a great new product, a panacea, it seemed, and best of all, it was safe. Try it, he said. Just sprinkle some around. It’ll be taken up by the plant and you won’t have any more problems. He was right. We used it only once on that plant. The beetles jumped ship and must have ratted us out to the Gazette, because they’ve not been back. The product we used was a systemic insecticide called Merit.

You know the old adage, There’s no free lunch. Keep this thought in mind.

Now we’re hearing about neonicotinoids, neonics for short. They’re synthetic pesticides that target the central nervous systems of insects. They were developed to be less toxic to mammals than their natural relative, nicotine. Large doses kill insects on contact. Sublethal doses  can cause disorientation and damage to the immune system. Was this the stuff we used many years ago? Yup, the main ingredient in Merit is imidacloprid, a potent, commonly sold neonicotinoid.

Today, after debut in the 1990’s, at least eight neonicotinoids are marketed, creating a multi-billion-dollar business in more than 120 countries, enriching their producers, Bayer CropScience, Syngenta, Dow Agrosciences, and others.

Active ingredient in neonicotinoids for lawns, flowers and vegetables is imidacloprid

Neonics are applied to cereals, cotton, grain, legumes, including soybeans, potatoes, corn, pome fruits, rice, turf, vegetables. They are found in greenhouse, garden and farm field. They are an ingredient in treatments for fleas. Widow and Wrangler are used by farmers. Bayer Advanced, (trade name for imidacloprid) in the bright blue containers that you see on nursery shelves, is marketed for homeowners, and Premise targets termites.

Lacewing larva, aka the “aphid lion” is a voracious feeder on pests, great for the garden but it doesn’t like pesticides. Photo by Peter J. Bryant

Here’s how they work. The pesticide can be applied in granular form, as a foliar spray, a wettable powder, a foam, or as a coating on seeds. It is water soluble, so roots absorb it readily and it travels easily through every part of the plant: leaves, stems, flowers, pollen, nectar. Traces can even be found in guttation, droplets exuded from leaves in early morning. It lasts through a growing season, and if re-applied annually, it can linger in soil and irrigation channels for years.

Another great pollinator, the sphinx moth, or hummingbird moth, sensitive to pesticides. Kaibera87

That perfect nursery plant? May very well have sipped neonic cocktails in a commercial greenhouse. A recent limited study of plants purchased from Lowe’s and Home Depot finds that at least half contain neurotoxic pesticides known to kill bees. Once in a garden, these plants continue to supply insect visitors – pollinators and nectar-sippers, and bees that may forage those guttation droplets — with trace amounts of pesticide all season long.

Apparently nobody thought about how bees might react to low doses of neonics. One effect is disorientation, ominous for a bee that must find its way back to the hive and then dance and waggle to show its sisters where the flower prizes are. If bees can’t forage flowers effciently. . . well, you can guess the rest of the story. 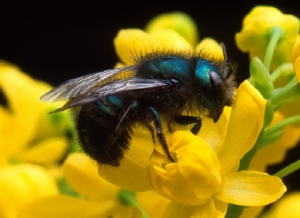 In one Twilight Zone scenario known as Colony Collapse Disorder (CCD), honeybees disappear from the hive, deserting, honey, queen, brood comb and whatever mites are hanging around. Although the cause is unknown, studies point to a weakening of honeybees’ immune systems by exposure to neonicotinoids that makes them more susceptible to disease that can lead to hive collapse. For more, see Part IV.

Unfortunately, pesticide application does not stop when the plant leaves the greenhouse. Independent garden centers are the largest single group of pesticide distributors in the world. Pesticides are money-makers because gardeners buy them. Gardeners buy them because they want perfect gardens. Kudos go to Lowe’s and Home Depot who are phasing out sales of neonicotinides to home gardeners.

Active neonicotinoid ingredients, depending on product, are: acetamiprid; clothianidin; dinotefuran; imidacloprid; thiacloprid; thiamethoxam, and lately, sulfoxaflor. Disturbingly, these  chemicals have been pushing other, less toxic alternatives off nursery shelves. Hopefully that will change soon.

Tachinid fly. Yes, some flies are great pollinators, too. Flagstaffotos

Once upon a time I was going to have the perfect garden. Those pictures of perfectly coifed plants in catalogues and magazines seduced me. No one ever talked about disarray or devastation. Every plant was a winner.

Except in our garden. I figured I was doing something wrong but I had no idea what. Hmph, I said, more from sour grapes than plain ole common sense. I’ll just look the other way. Perfection is not worth fretting over. At the same time I was discovering that we were only caretakers of our plot. The garden didn’t really belong to us. Mammals, birds, insects, none of them recognize property lines. Nor is tidiness high on their priority list. 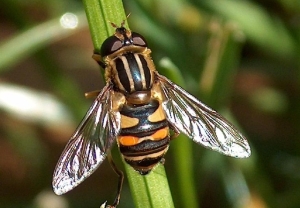 A whole family of flies that pollinate plants, this brightly colored hoverfly is susceptible to systemic pesticides

So we shifted our priorities from perfection to co-existence. Immediately gardening became more relaxed. We began to tolerate insect damage. Occasionally we might hand-pick pests like scales. Or we let insect life cycles run their course. During our long growing season, leaves damaged in spring are often replaced by new leaves when the insect is gone.

Sometimes we become ogres. If a plant is victimized, we prune it or purge it. That’s drastic treatment for an innocent plant. ‘Cleopatra’ camellia pruned to ground level because of fungal leaf gall came back with vigor the next year, a success story. An established cedar relentlessly attacked by bagworms had to be terminated. Ditto for euonymus attacked by scale. Too bad.

The beefly, another  family of great  pollinators,  here greatly enlarged

Healthy plants are usually unpalatable to insects. (It’s a chemical thing.) But a totterer that never asked to be part of any garden becomes easy prey. We spend a lot of time choosing plants that should thrive, and even more time figuring out where they will be happiest.

Now, when I buy plants, I will also have to spend time finding out how they’ve been treated in the nursery. This is not some weird idea. Friends of the Earth, Center for Food Safety, SumOfUs, The Xerces Society and several other non-profits have mounted huge campaigns to convince nurseries to stop selling pre-treated plants and bee-killing pesticides. Visit their web sites to find out how you can participate. Or talk to your local garden center about your concerns.