One of many…chain saw always humming

It is difficult to incorporate fifty stumps into a garden design. In early spring the daffodils rose above it all, but only for a while. Now it was late spring. If we were to get on with the garden, it was high time for us to tackle the stumps.

People who did not have fifty stumps in their gardens had all sorts of creative suggestions. No, we said, they were not candidates for garden art. Nor were they pedestals for potted plants that we would forget to water. No, we could not plant around them because their roots were in the way. We had to get rid of them.

We attempt to build paths. Houses across the canal are now visible

We had to find someone who could grind stumps. Lots of people around here grind stumps, but their grinders are mounted permanently on the backs of pick-up trucks. This is fine if property is clear-cut. In a way, our garden had been clear-cut. But pockets of plants had survived, and these were tucked along narrow paths. It was impossible for any truck to maneuver into the heart of the garden.

We began to search for someone with a small portable grinder who could do a professional job. This was not an easy task. We finally located our Knight of the Stump through a listing in one of those community phone books. Sir Stump told us he had purchased Grinder specifically for cleaning up after Isabel. Sure, he would be able to maneuver his mount along our paths. In fact, he would welcome the practice, since he could finish paying for Grinder and learn how to manage him at the same time. Oh boy. 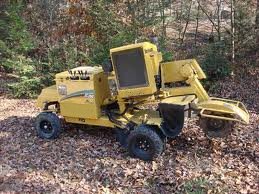 Not the sleek stallion one might expect for a knight

Now, Grinder had a will of his own. He weighed at least a thousand pounds and had the power of twenty-five horses. A true noble steed for a knight errant, though he was a little deficient in looks and carriage. He behaved more like a bucking bronco from the old west. Give him some slack and he would buck and jump and try to break loose.

But Sir Stump worked his restless stallion like a true knight. He did battle with those stumps and with the roots, too, until they were pulverized. We dared not breathe as we watched him tame the beast. This was hard work. Sir Stump needed lots of rest time, which suited us just fine, because it gave us a chance to start breathing again. Momentarily, we could stop worrying about Grinder flying off into space.

Also, it was quite pleasant to listen to a knight talk about how he was restoring his historic manor house, which, of course, made him a true knight in our eyes.

On a crooked sort of path Grinder did what we feared. He broke loose. Only instead of flying off, he just rolled over, more like a dead dog than a UFO. He must have gotten spooked, because he peed gasoline all over himself and the garden. But Grinder wasn’t really dead because he wouldn’t stop bucking and hiccuping.

Which made it all the harder to set the slipping, sliding beast upright. We had visions of poor Stump pinned beneath the charger, ambulances with sirens wailing, and maybe a fire truck or two, racing to the rescue.

Well, no such thing happened. When Sir Stump finally quietened his steed, he retrieved a block and tackle from his truck and gently lifted Grinder up and set him to rights. Grinder must have lost a little of his spunk during the incident, because Sir Stump was able to rein him in and finish the grinding without incident. We didn’t start breathing again until the knight and his errant mount were on their way home.

We celebrated the grinding of the stumps.

The celebration lasted until the rains came. Instead of tripping over stumps, we were now sinking up to our ankles in pockets of loose soil and shredded roots that had become bowls of porridge.

Yes, Puck survived the storm and guards our garden on an old stump

We thought we were finished filling holes. We had emptied countless wheel barrows full of sand into the caverns and congratulated ourselves that neither of us had broken our necks falling in with the sand from the wheelbarrow, though we may have lost a trowel or two along the way.

Now we were back at it again, filling these soupy soil pockets to prevent an unwary stumble into a vat of porridge. We backfilled each void with sand and compost several times until, after a year or two, the porridge became workable soil and plants could grow instead of wallow.

We vowed we would never grind stumps again. And we never have. Maybe using them as pedestals for garden statuary is not such a bad idea after all–just temporarily, mind you. . .Eventually stumps decay.