What Is Killing the Honeybee? Part IV

Posted on February 21, 2014 by aheronsgarden

“It is ironic to think that man might determine his own future by something so seemingly trivial as the choice of an insect spray.”– Rachel Carson, Silent Spring

An example of the opening in the barn where bees exited and entered.

Back in the seventies, Bob and I helped care for a demonstration beehive at an environmental center. The “hive” consisted of a single frame on a stand set up in an unheated barn. The bees entered and exited via a plastic pipe. All activities, laying eggs, brooding larva, storing pollen and honey, took place on this one frame.

That hive told a wonderful story to the inquiring public. Looking at it from the honeybees’ point of view, it was nothing more than an over-crowded tenement, a tenth the size of a full-sized hive. It was impossible for the bees to grow their ranks and store enough honey to get them through cold weather. So we supplemented their stores with sugar water.

We can thank bees for many of our favorite fruits and veggies. beesfree.biz

Despite cramped quarters, the bees were healthy. No mites, no parasites, no pathogens, no moths, no fungi. No treatments needed. Occasionally we had to send off for a new queen in early spring. Maybe the old queen was fed up with living conditions and took off with a few girlfriends to find some nicer digs, but disease was never an issue.

Now compare our recollections with lamentations of  today’s professional beekeepers whose livelihoods depend on healthy bees and strong hives and who are sustaining great losses. 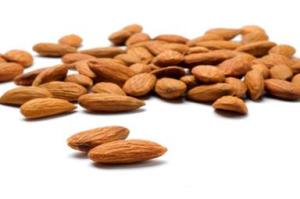 The almond crop depends entirely on pollination by honeybees. US production, the world’s largest, is economically significant

Bill Dahle, 50, owner of Big Sky Honey in Fairview, Montana: “They looked so healthy last spring. We were so proud of them. Then, about the first of September, they started to fall on their face, to die like crazy. We’ve been doing this 30 years, and we’ve never experienced this kind of loss before.”

Bret Adee, the nation’s largest beekeeper, owner, with father and brother, of Adee Honey Farms, South Dakota: “They looked beautiful in October, and in December they started falling apart, when it got cold. We lost 42 percent over the winter. But by the time we came around to pollinate almonds, it was a 55 percent loss.” 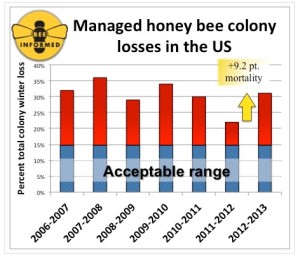 Mr. Bradshaw, 50, from an almond orchard beginning to bloom in California: “I have never seen anything like it. Box after box after box are just empty. There’s nobody home.”

Stunning losses like these have been going on since 2006. 2014 winter losses have yet to be tallied. Are honeybees living on the edge? And if they go, will they take us with them? 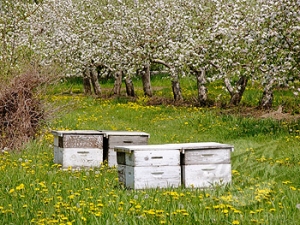 Bee hives in a Michigan apple orchard in full bloom ready for honeybees to pollinate. Superstock

Let’s take a look at a day in the life of a honeybee. Perhaps she is gathering pollen from apple blossoms, or she may sip nectar from roadside weeds, or she may cross a farm field, visit a garden. Her travels may take her a mile or two from her hive.

The apple trees could have been sprayed with a combination of neonics and fungicide. Once thought to be safe for honeybees in small quantities, new research by the USDA and University of Maryland shows that small amounts of fungicides in pollen may make bees more susceptible to Nosema, a gut parasite that is implicated in Colony Collapse Disease (CCD). And cocktails of chemicals become even more deadly to the honeybee. 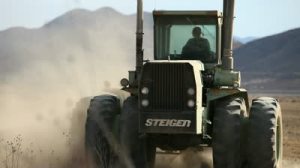 Dust from treated seeds can be fatal to honeybees. Shutterstock

Perhaps the farm field is being planted with corn seeds coated by neonics to protect the new plants as they grow. Dust and talc from treated seed blows as the seed is drilled down. Neonics are supposed to be friendlier to bees, wildlife and people than traditional pesticides, but if she gets caught in this dusty bowl, she may never return to the hive and in turn poison scavengers that feed on her.

Is this aster safe to sip or take pollen from? wikicommons

Or, if she stops at roadside plants near a treated field, she could pick up a sublethal dose of chemicals and have trouble flying or forget the way home. If she manages to return, she may not remember her pollen source well enough to dance directions to her hive mates. And the contaminated pollen she’s carrying can weaken the immune systems of larvae and adults that eat it. If she’s unlucky that day and stops at a parking lot with a feast of flowers while pesticides are being applied, well, that’s lights out. 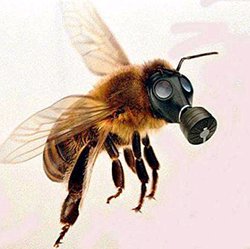 Plants in the garden she visits may have been sprayed with neonics sold by nurseries. Or the soil may have been drenched with the pesticide. It’s a convenient way to keep plants cosmetically perfect, but quantities used by gardeners are many times greater than those allowed in farming. Neonics can last up to three years in soil and plants, in some cases as much as six years. She may be gathering pollen contaminated by multiple applications during years past, with the potential to make the hive susceptible to mites, pathogens, and CCD.

If she dodges hazards from collection she may go home to hazards from predators. The varroa mite is a nasty by-product of globalization, a hitchhiker from Asia arriving on the west coast in the late 1980’s, then crossing the country. It has proved deadly to bees in weak hives and has been fingered in CCD. And this is only one mite that attacks bees.

Well-meaning beekeepers treat hives with miticides and fungicides which can weaken bees. Even plant diseases can cross from pollen to bee. A 2010 survey found 98 different pesticides and deadly metabolites (by-products of pesticide breakdown) in combined samples of pollen. Each one of these can be hazardous to a bee’s health. In combination, they may be far more deadly. How halcyon was the bee’s life in the 1970’s compared to today’s barrage of parasites, predators and pathogens.

As Betty remarked in Part III, Houston, we have a problem.

Advocacy groups like Xerces Society, Friends of the Earth, SumOfUs, SierraRise, Center for Food Safety, and EarthJustice are working hard to publicize the plight of the honeybee. The campaign to curtail use of neonics is strong, and Home Depot is reconsidering its approach. Till now, Lowes has been silent. 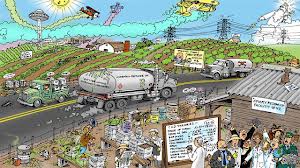 A world of hazards awaits the honeybee. Snippit.snappits

What is being done: Ontario, Canada, has banned use of neonics on ornamental plants. This is the most immediate and beneficial action that could be taken.

How much we owe the bees

Beekeepers and farmers in France and Germany were so angry about crop losses that these countries have already initiated limited bans. The European Union is banning certain neonics produced by Bayer and Syngenta for two years. Bayer, for its part, is suing the European Union, claiming mites, disease, viruses, loss of habitat and bad beekeeping are the real issues. According to Bayer, it has “proudly dedicated 25 years to ensuring the protection of bees through its ‘Bee Care Program’.”

What is not being done: The United Kingdom is delaying a ban until Bayer explains holes in its studies.

And till now, only lip service in United States, with EPA claiming it needs more data, which will take another five years. 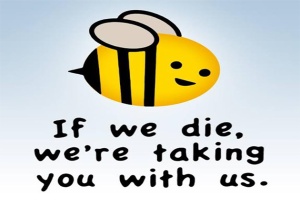 Do you think they have a right to be angry? foodandhealthrevolution.com

About 16,000 pesticides are registered with the EPA. Now we learn that the Government Accountability Office has been reproaching the agency since 1986 for confusing and virtually untrackable records on pesticides. The agency does not seem to know how many pesticides are “conditionally registered,” but it assures us that its handling of pesticide review is appropriate.

Yes, the agency has called for stricter labeling of neonics. But at the same time, it has approved Dow’s latest toxic entry in the field, Sulfoxaflor. Environmentalists and beekeepers are suing EPA for approving neonics based on incomplete studies. 50,000 citizen letters have been sent demanding a ban.

Somebody in Congress is trying. Last year the Save America’s Pollinators Act, HR 2692 was introduced by Rep. Eric Blumenauer (D-OR) and Conyers (D-MI). Both states depend on the honeybee to pollinate their food crops. The Act calls for suspending certain neonics until research shows they’re safe for honey bees and native pollinators.Unfortunately, the Act was not included in the recently passed Farm Bill and is still sitting in committee. 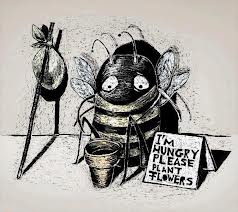 This cartoon says it all. ahealthylifeforme.com

What we gardeners can do:  We can email our representatives asking them to support the Save America’s Pollinators Act, HR 2692. We can check out sites like Pollinator Partnerships on line for educational resources. An internet search will point the way to other resources. We can publicize the plight of honeybees on social media. And we can ban neonics from our gardens.