“Hold on to your hats, Hertford. It’s coming your way,” reports the Weather Channel. Susan and Mike, our worried daughter and son-in-law in New Hampshire are relaying Weather Channel updates to us while we watch the 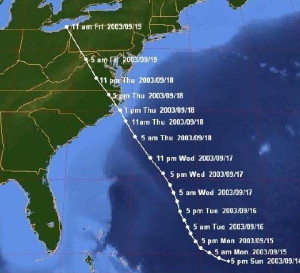 To our town? To our little town? Even on local stations, no one ever talks about the weather in Hertford. You must have misheard. It’s not that bad. A bit of wind. A bit of rain. Nothing we can’t handle.

Isabel has arrived. For starters, she hurls shrapnel: pine cones, sweet gum balls, seed pods. Then torpedoes, branch-missiles, shot into the ground from overhead launches. So fast we can barely see what is happening.

The storm we couldn’t see coming

Not content with light artillery and single trees, she revs up with a Wagnerian roll and begins to snap trees two or three at a time depending on her caprice. We don’t know where to look, and we are never quite sure of what is happening.

That wind, constant, twisting, whipping, battering, ripping. Leaves wrenched, raked by the gale. Crowns of pines waltzing to and fro in frenzied syncopation.

The noise, a constant roar punctuated by high-pitched, angry wails. That, we soon learn, is when trees twist and snap. 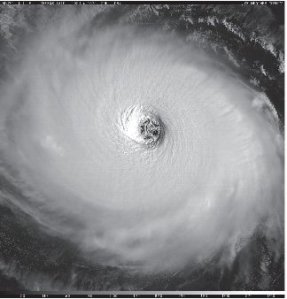 Within the 40-mile-wide eye are  spinning vortices. Are they adding to the power of Isabel?

We are locked up tight, yet Susan hears the howl through our closed doors and over the phone lines and she wonders how we can stand the din. We wonder how the phone can still be operating.

Oh, Isabel has a wicked sense of humor. Before she snaps the phone lines, she snaps a pine, twisting and tearing at a thick tangle of confederate jasmine growing round a neighboring pine. A second howl, and the jasmine is neatly set to rights, barely a leaf disturbed. 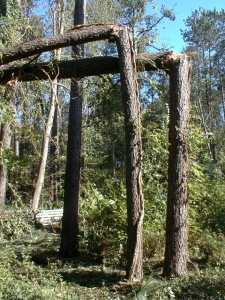 Three lanky whippersnappers fall in braided embrace, slammed into by our birdhouse tree. Twin pines snap as one, cut off at the knees. Like matchsticks, two old, heavy limbs from the crown of a maple are twisted and tossed.

The waters rise, very quickly, like a great wave rolling onto a beach, battering our protected boat slip and covering the land. The bench is still on the dock. We’d forgotten it. A first phalanx of trees topples, wedging it under the dock. Good! It will stay put, we say naively.

The waves have greater power. They set it free to bob away. Too bad, we say. On cue, a second phalanx of trees falls and traps the bench in tangled trunks. 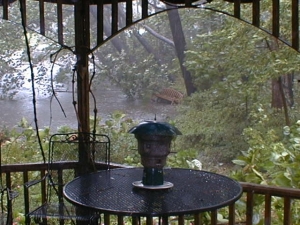 The bench bobbing as the water rises. Major damage still to come

Now we are using the “bag” phone from our car, an unwieldy wireless relic from the pre-cell-phone era. Mike is keeping us abreast of the storm track. We in turn are sportscasters, giving staccato play by play on the action, though we suspect that our hit-or-miss reporting (When did that one go down? or, I guess I missed that one) probably would not qualify us for the big leagues.

When the water begins to rise, Mike is clearly worried. He urges us to leave. Leave? Leave? Where would we go? To higher ground. What higher ground? 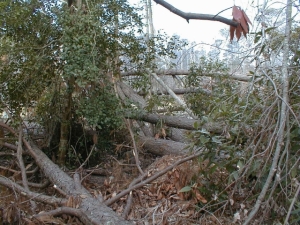 A view from the gazebo. The roads were not much better

Isn’t there any higher ground? No. There’s no higher ground. Well, what’s your Plan B? Plan B? Plan B? We never had Plan A, unless you call riding out the storm Plan A. (We learned later that if we had had a Plan B, we would have needed a helicopter. Every road was impassable.)

Plan C turns out to be commanding and begging. Go back, we command (beg). Go back. Go back. Go back. Plan C actually works. The waters stop rising. They come up to the house with great energy, so that we think we will be engulfed. Instead, they obey our command (plea). They stop rolling in. In a parting gesture, to let us know who is running this show, they dawdle before they retreat, saturating the ground for good measure and setting us up for the next battering round. But they retreat.

One-two gusts keep coming. The previous day we were worried about gazing 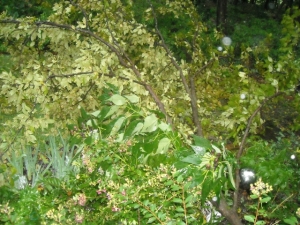 The gazing globe looks small next to the heavy tree branch that fell, just missing it

globes. Now we are afraid for our house. Isabel is plucking trees like weeds. The shoreline is so littered we no longer know where land ends and water begins. Our shimmery, leafy cathedral now looks like a jousting arena for an angry sky-spirit, and the dark, inviting woods are a shambles.

The bag phone finally dies. We feel profoundly isolated, cut apart from the rest of the world. Is this happening anywhere else?  Or are we, just we, directly in the path of this angry maelstrom?

We are not isolated. Over the noise of the wind we hear strange musical murmurings. Again. And again. A gossipy chatter whose sweetness defies the powerful howl of the storm.

Goldfinches are having a hurricane party in our gazebo. In and out they fly, precisely timing their flights between gusts. Chickadees dive for their feeder, stop abruptly in mid air. Beneath them, cardinals rummage for sunflower jetsam. Hummingbirds zip by for a nip and do a puzzled turnabout. 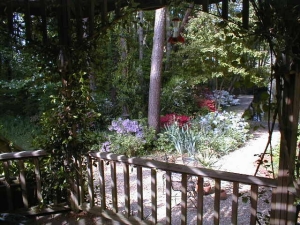 Taken in spring from our gazebo, the “confederate jasmine” pine tree deep in the background

We had taken the feeders down. We didn’t want projectiles so close to the house. (Never mind the tall pines.) After all, what bird or animal would be out in a hurricane? A box turtle wanders by. A lonely squirrel, wounded by flying debris, forages. We are more prisoners of the storm than our wildlife neighbors. We put the feeders back up and throw some seed on the deck for late afternoon stragglers.

As dingy twilight closes in, we see that the confederate-jasmine pine is missing. We blink. It stood not thirty feet from the house. Earlier, we watched the frenzied ballet. How could we not have seen it fall? Oh well, no starry blooms next spring.

The winds finally turn. We breathe again. The storm is moving on. The gale will 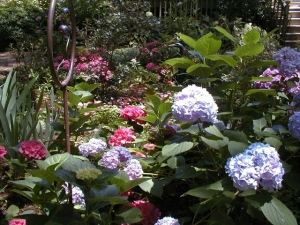 Our backyard in July before Isabel

persist for another eight hours but the howl has become a growl. Shrapnel will ping against windows throughout a black night. We lie awake and wonder what we will find in the morning.