We Enter an Old World

As soon as we stepped onto that cobblestone walk lined with blooming camellias we began to slip back into the 18th century.

Our first glimpse of the garden

Our  host-owner immediately introduced us to his beloved camellias and made sure each one of us received one of his special blossoms.

There are camellias everywhere here, hundreds of specimens, pruned to hedges, grown as single trees or in impressive groupings with other plants.

They lead us into the depths of the garden where we find stone fountains, gazebos, statuary, sundials and stone crosses. 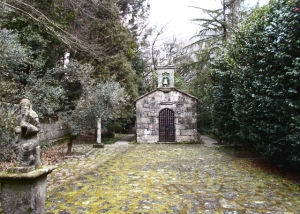 Chapel flanked by camellias and woodlands

A small 16th century chapel, a 12th century baptismal font, and a granite washing place add to the romance.

Tucked into the woods peppered with ancient trees are oases of tranquillity, where one can linger, contemplate, meditate, write poetry, set up an easel.

The stone manor house, granite, of course,  Galician neoclassical, is crusted with lichen, earmarks of fresh, unpolluted air and symbols of times past.

The pazo, or manor house

It is hard to imagine this manor house being built at about the same time that America was forming up to assert its independence.

Two horreos, or granaries, one large, crafted of stone in the 18th century, and another smaller one from the 19th century remind us that farming is the foundation for today’s gardens.

The vineyards surrounding the gardens and the winery are major attractions.

Embers glowed in the antique fireplace as we sat down to an elegant lunch , accompanied, of course, by the pazo’s albarino wine.

It was a lovely end to a perfect morning:

a step back in history…

an amble through old woods rich with aged granite artifacts…

and a taste of tapas and wine…

Postscript: I was doubly pleased to learn that I was growing some of the same camellias we saw in this garden. 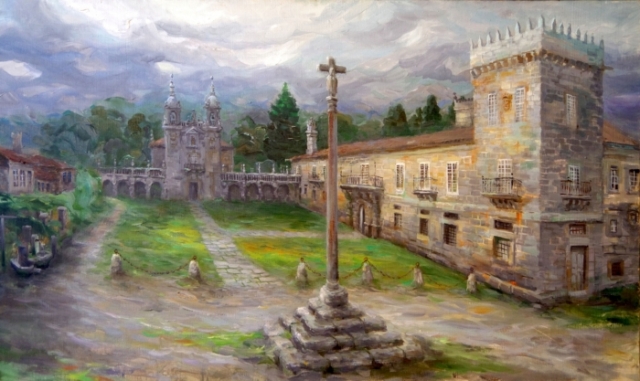 Painting of church and fortress by Guillerglez

There are two spots in this baroque 18th century garden I will probably never forget. Curiously, camellias play no particular role in the memories, though we passed through hedges of them, and we admired large, ancient specimens.

The memory of the topiary. The sun had just come out after a misty rain so the garden glistened.

What fun we had in the topiary garden, hunting up all sorts of creatures that surrounded us.

The magic toadstool, the sea turtle, the rabbit, the gallego—and more, one upon the other, so close it was hard to get pictures. I seem to remember a sea serpent,  or a dragon winding through.

Had we stepped back into a Lewis Carroll world? I expected to turn around and see a walrus, or Alice herself.

We admired the whimsy and cleverness  surrounding us,  and we wished the creators were at hand to tell us about their work. 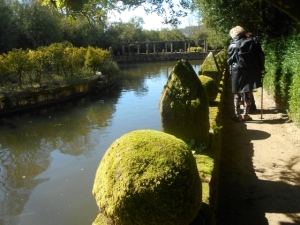 The memory of the ponds. This has to be one of the most creative and thoughtful garden designs ever.

A river flows through the property and feeds the ponds, which are divided by a bridge with a pergola that must drip with grapes in summer.

The stone walls around the pond are topped with old mossy granite balls and battlements that look like they were collected from 15th century fortresses.

At one end an elegant collonaded bridge receives the flow of water. 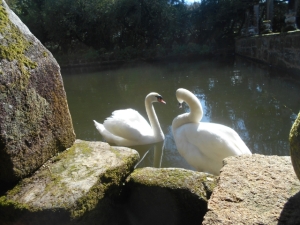 As we awaken from the spell of this tableau, we find that each pond has an island sculpted in stone, shaped like a boat with gardens spilling out.

Here is where allegory, religion and garden artistry merge. Looking more closely, we see that each boat has a figure at the helm. On our left, as we crossed the bridge, was the figure of a sailor who stood for Virtue. On our right stood the figure of Vice.

White swans on the right, black swans on the left complete the allegory. We lingered long here and left reluctantly.

The garden is of recent design in Galician time.

But its origins date back to a 13th century fortress, still active in the 15th century when the lords of Oca were fighting to control Castile and losing to Ferdinand and Isabella.

Today the buildings are typical of a Galician manor house.

We were fortunate to have a tour of the interior and its historic furnishings. 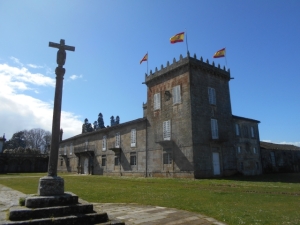 Pazo de Oca is one of the most visited gardens in Galicia. In fact, some people call it the Versailles of Galicia.

Ribbons of clipped boxwood create formal areas, but the camellias and azaleas, palms and rhododendrons backed by a forest of oak and chestnut, walnut and birch make it distinctively Galician.

For us, the garden had a charm and visual appeal that could only be Galician.

A Wild Walk into the Past

The old trees in this garden would whisper to us tales of life long ago if we could but read them. Here we found romance, great age, and wildness.

Stone cross in the woods as we entered the pazo

Here wanderers are captivated by meandering paths, stone steps, and surprises round the bend.

From the minutiae of moss to the magnificence of a great oak, this 19th century garden is a photographer’s delight.

Less ordered than other Galician gardens, (though old camellias, 500 of them, we are told, and sprawling grape vines have their allotted places) this pazo, some say, is the most fascinating ornamental garden in Galicia.

As I thought about the wildness in some parts of my own garden, I felt a strong kinship with the exuberant tangle of plants in all sorts of stages, from a lonely spring primrose to limbs cast off by old trees.

Ownership of this pazo dates from the 15th century, but by the 18th century a deep and abiding interest in the cultivation of plants had grown up.

Forward-looking heirs began to seek  new methods of farming  and livestock production, offering prizes to farmers who improved their harvest.  Olives and other new crops like mulberries were introduced. 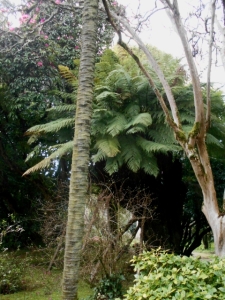 But the embryo of the garden we see today was not born until the 19th century.

Ivan Armada (familiarly known as Uncle Ivan) and Fernandez de Cordoba, both of whom must have been plantaholics, took it upon themselves to collect plants from all over the world: camellias and boxwood, magnolias, olive trees, Australian ferns, Japanese cedar, tulip poplars, the columnar English oak and other monumental and unusual trees.

Out of these assorted plants a verdant fantasy land was created that includes a lovely waterfall, camellia walks and a long, picturesque Paseo de los Olivos whose ancient plants, until recently, produced abundant oil the old way, with granite wheel mill and beam press.

Fountains and ponds, a carved granite bola del mundo, (world globe) and grape vine pergola with carved granite columns add their charms to this typical — and not so typical — Galician garden.

As all good gardeners should do, the plant-coveting duo kept notebooks that tell of planting new camellias next to others that were already 20 feet high and probably planted in the late 18th century.

These records give us a tiny snapshot of how the garden grew.

Gardeners who do not feel that they manage well (me) might be interested in knowing that the property is managed by a couple, with only eight workers to tend this large garden and produce camellias for sale.

For a tidbit of history, check out “La Coca” in front of the manor.

“La Coca” is Galician for the winged dragon of mythology. The surrounding linked dragons are the ancient symbol for the royal lineage of the Mondragons and the Marquises of Santa Cruz.

They are found on all the coats of arms throughout the mansion.

For more about camellias and Galicia, visit the following links.