Peter the Great’s Palace and Gardens on the outskirts of St. Petersburg

Oh, we were truants in this garden.

Blame it on the fountains! Those beguiling fountains! Everywhere splashing, bobbing, leaping, playing, teasing, spitting, laughing, hissing, darting, dribbling, bubbling, soaring, sheeting over gilded statues of man and beast, coursing down marble steps, and watch out or you, too, will get a shower. 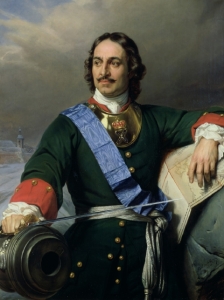 Peter the Great, 1838, by Paul Delaroche. Note map, saber, and cannon, symbols of his reign

We didn’t have a chance. Two plant lovers who make it a point to ferret out the secrets of every garden we visit and we are so bewitched by the fountains we forget about plants. The moment we emerged from the palace onto the checkerboard terrace, the Grand Cascade of fountains had us in thrall.

It’s magic, this parade of fountains. Or so it seems, for there are no pumps here. From springs in high ground miles away, water flows through pipes into reservoirs that feed the fountains. The difference in elevation creates enough pressure to power the spectacle, a masterpiece of engineering conceived and perfected about three centuries ago. We felt fortunate that they were splashing for us so late in the year. In a few days they would be quenched until spring, whenever that may come in this land.

For a long moment we stood outside the palace – it’s built on a bluff – drinking in (no pun intended) the view down the canal to the Gulf of Finland. We should have taken a few minutes to explore gardens at the back of the palace: formal, patterned with ponds and fountains and fruit trees, less spectacular. But we didn’t.

Mesmerized, we simply flowed with the Grand Cascade down the staircase toward the Lower Gardens and the lovely, large pool with the outsized figure of a golden Samson tearing open the jaws of a lion that spouts an impressive column of water. For Russians, this high drama holds glorious symbolism, a reminder of Peter’s victory at Poltava (east of Kiev) in the twenty-year-long Great Northern War, during which St. Petersburg was founded on new territory and Russia became a power to be reckoned with. The lion is part of the Swedish coat of arms and this major victory occurred on Sweden’s St. Sampson’s Day. (Some figurative poetic license here.)

Historic Grace Notes: About three hundred years ago Peter the Great built a simple, rustic cabin here to keep an eye on naval affairs in nearby Kronstadt. From this cabin evolved the grand baroque palace, gardens and fountains that became known to the world as the Versailles of St. Petersburg. We today are not seeing the original, but rather a painstaking re-creation resurrected from almost total destruction by Germans during World War II.

From the pond we strolled along the allee of pleached lindens that line the canal, pausing to stand on picturesque bridges that invite exploration into wooded Lower Gardens. Within this sprawling tract are grand buildings, fountains and follies, statues and arbors and long vistas, a wonderful secluded world where, if you have stretches of time and the weather is good, you can be splashed by a mischievous fountain, have a picnic, or lose yourself among leafy paths.

And that was exactly why we did not venture very far along these paths. After our guided tour of the palace, during the brief time remaining, we chose to leave the group and explore the gardens on our own. Instead of returning by bus, we would take the last hydrofoil back to St. Petersburg.

What a fine adventure that would be. The freedom was delicious. But there was a price. Our eyes could not stray too far from the clock. We separated, eager to find our own secrets in these lovely fall gardens as the afternoon faded. We noticed that people who took side paths simply disappeared from view ten yards into the woodland.

Our perspective began to change. If we ventured very far in for a look round these 250-acre gardens and they seduced us. . .would we become a latter-day Hansel-and-Gretel team lost in a dark wood with no bread crumbs, no one to notice and no way back. Over-reaction, of course, but caution trumped curiosity. Maybe some day we’ll return to stroll these gardens at leisure, like seasoned nobility.

See Catherine Park for pictures and discussion of that garden.

For more about our week in St. Petersburg, visit these posts

St. Petersburg III: The Neva Runs Through It

St. Petersburg IV: A Church, A Museum and Sunday in a Garden

St. Petersburg V: From Tar Yards to Revolution and Beyond