One of our favorite camellias pokes from under the fence

Nightingale. There were mysteries to solve, trees to save.

A favorite camellia was flattened under a fence by a tall pine that had snapped and ricocheted off the house. Poirot sawed the pine up, while Florence assisted with raising the fence and staking the camellia. What a team.

A young crabapple lay crumpled under an eighty-foot pine. Poirot manned thechainsaw to free the crabapple, and Florence assisted with the rope and bungee that would pull the crabapple upright for staking to a nearby red maple.

The rescued tree looked grand, supple trunk in place, bright red crabapples glinting in the sun, squirrels flipping around its slender boughs. Another job well done by the Poirot-Nightingale duo. 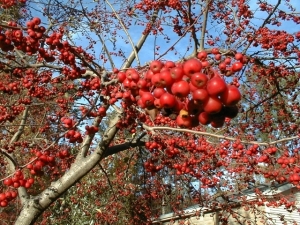 Oh dear. Do you see what I see? I’m looking at a big split in the red maple’s trunk. How did we miss that? (Apologies to you, Inspector Poirot. We impostors know you would not have tolerated this oversight.) The maple would have to go and the rescue team would have to be more clever.

More observant, too. The team had overlooked a lanky tree not ten steps away. Native persimmon? Beats me, never noticed it before. Eclipsed by the giants around it. Probably starved, too. Giants are never keen on sharing. Yet the giants had fallen and the persimmon had survived. On this day it would serve as a splendid prop for the crabapple.

The sleuth and the nurse began to look hard at the damaged woods. How much had they failed to notice when the woods were whole? Too late to think about that now.

Where have all our plants gone?

Shrubs dangled high in the air, caught in mounds of uprooted trees. Garden books don’t generally include this kind of rescue operation in their how-to discussions, but the Poirot-Nightingale team was on top of the situation, improvising–and hoping.

Some of the plants were

The vista in spring. Note confederate jasmine climbing pine to the left

survivors, camellias and azaleas that grew in spite of early tribulations in wet, suck-a-shovel muck. Now they were retrieved, pruned, and relocated to pots for replanting (when?): another splendid operation performed by the upbeat pair.

After a few days of detective and plant mission work, the duo noticed that a tree had gone missing. A tree gone missing, you say. Only one? Exactly which tree did you have in mind? Seriously, I cannot find it. There is no trace of this tree. 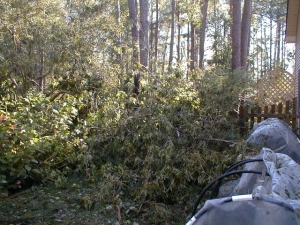 The 80-foot uprooted culprit that buried a tree landed on our deck, barely missing the garage

The tree in question was a Japanese zelkova raised from a three-inch pruning cast off from a bonzai-trim in 1996. A tough tree, often used in cities, in seven years it had grown to a height of twelve feet with a spread of eight feet. How could a tree that big disappear?

Anxious to solve the mystery, the Poirot-Nghtingale duo began a painstaking search through the tangle. In the process of searching for the zelkova it became apparent that a birdbath had gone missing, too.

The fenced-in deck in early summer

Where’s the birdbath? What birdbath? The one that’s always been here. There was a birdbath there? Yes, but it’s gone now. I don’t know anything about a birdbath. Well, where do you suppose it could be?

Distracted from the original zelkova task, the dynamic duo began looking for the birdbath.

That was when the perceptive pair tripped over the zelkova branch that broke the surface of the soil. The rest of the tree lay buried, ground in by a mighty uprooted sweet gum. Rising to the challenge, Poirot performed delicate chain-saw surgery and dug out the tree. Florence pruned it for good measure and the duo raised it up, anchoring it with the, by now, time-tested rope-and-bungee rig.

As for the birdbath, the keen-eyed duo found that later, deep in a cavern created by the uprooted sweet gum.

The leaners and the totterers were beyond help. They were good trees that stood up to the gale. But they were bowed and their innards were broken. Their shredded leaves and stooped shoulders reflected the exhaustion that the disappointed duo was beginning to feel.

Without looking back, the sad decision was made. Some trees were cut at the base and allowed to fall into the woods. To avoid greater damage to the garden, others had to be climbed and taken down one piece at a time, limbs carefully lowered by ropes and pulleys.

Balancing as the tree bends

This is tricky work on unstable trees. We dared not breathe as we watched the balancing act. The Texas Tree Man was a pro. He climbed, roped and cut with confidence and skill. He was part of an unofficial cast of lumberjacks who follow major storms. He came recommended by a neighbor we hardly knew. He did a cracker-jack job. We’d hire him again, if we could remember his name. And find him. 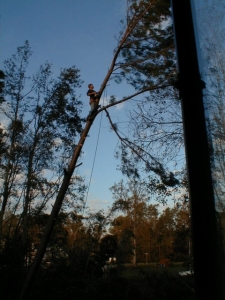 Final cut of the day