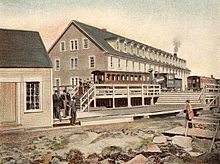 Even in fog the summit of Mt. Washington dazzled us. It was a metropolis. We bought tee shirts. This body climbed Mt. Washington 6288 feet. Well, we’d climbed 3700 feet of it.

We ate a bowl of clam chowder that was the best we’d ever eaten, and we gaped in awe at crowds of people. We’d not realized the loneliness of the trail had taken such hold.

A shuttle runs up and down the Mt. Washington Auto Road, but it would leave us on the opposite side of the mountain, 50 miles away from the car.

I’m an ex-city girl, so this news did not phase me. No problem, I said confidently, we could grab a taxi from there. No, the ranger laughed, There are no taxis in the wilderness.

Wishful viewing. (This person is neither Megs nor I–legs too long)

The cog railway, on the other hand, would leave us only about five miles from our car.

We could hike or hitch a ride the rest of the way. We shelled out twenty bucks and trusted we’d find a way.

We were first in line. This was one ride we were not going to miss. We’d get seats together and Megs said she would stand up and plea for a ride, and surely someone respectable would offer one.

The cog railway engine looks like the Little Engine that Could

Sorry miss, we give preference to round trippers. You’ll have to go to the end of the line. You mean that very long line behind us?

At least we could survey prospects for hitchhiking. They didn’t look good. Mostly families with kids. Where would they find room for two grubby hikers with packs?

Megs sat next to a man from Germany who spoke little English and I sat next to a young man who seemed dismayed at having to share his seat. No prospects here, we thought.

Well, he and I got to talking. It turned out he came from the same town my son lived in, and sure, he’d give us a ride.

Hey Megs, I stage-whispered when the young man whose name I couldn’t quite remember (if he’d ever told me) left to ride the platform, we’ve got a ride.

He seems like a nice young man and he’s by himself and he’s got a truck so there’s room for us and our packs, and, guess what? He offered the ride before I had a chance to ask.

Out of the mists

Are you sure he’s okay? I think so, he lives in the same town as my son.

Well, I don’t know if that’s such a recommendation. What’s his name? I don’t think he ever told me. Hmmm. And he’s by himself and he said he’d give us a ride. Doesn’t that sound suspicious to you?

(Note to alert readers who may have picked up a difference in our approaches to the offer of a ride from a stranger: Megs lives on Long Island where people lock their doors all the time. I now live in rural North Carolina where people routinely relate medical histories and daily schedules to any stranger who will take the time to listen.)

That being said, you also have to understand that Megs and I had never hitchhiked. Furthermore, we had both cut our eye teeth on Alfred Hitchcock movies and had since devoured Stephen King and Dean Koontz. So we knew all about what to look for in these situations.

Did he say why he’s alone? I think so, but that was before he offered the ride, so I wasn’t really paying attention. Something about a wedding and someone getting sick and he wanted to get away.

Sounds fishy to me. For all we know, he could be an axe murderer. Nah, I didn’t see an axe in his pocket when he got up. Don’t be silly, it’d be in his truck.

Well, he was real worried about getting lost. That doesn’t sound axe-murdery to me. That could just be a ploy to lull you into trusting him.

Where’s your knife? Buried in my pack. It’s not very sharp. Well, if we had to, I suppose we could gang up on him and beat him with our packs.

Memories of this view from the top of Mt. Pierce, the last clear weather before the clouds rolled in are fading with reality

Great idea. We could relax now. We had a plan. It never occurred to either of us that the packs would be in the back of a truck and well out of reach of short people who had to crawl up big rocks on their hands and knees.

Pump him, Megs said like a first-class detective, see what you can find out. How do I do that?

Before she could give instruction, our nice young man/truck driver/ /chauffeur/axe murderer had returned to his seat so we buttoned our lips.

Memories of trudging through rock and mists remain sharp

Confident of our abilities to inflict a sound beating with our backpacks if necessary, we settled down and enjoyed the ride.

The mountain stretched above and below and we could say we climbed it.

If anything, the mountain seemed vaster and wilder to us here than when we were on it. Halfway down the sun broke through. We were out of the clouds and back to real life.

Our chauffeur turned out not to be an axe murderer but instead was simply a nice young man who drove a truck and didn’t want to get lost in the mountains. While he was delivering us, he apologized for what he was about to say. I know it’s rude, but could I ask how old you are? 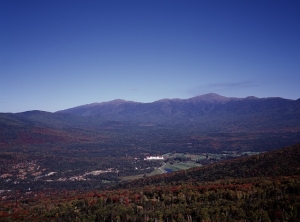 Mt. Washington Hotel, a speck in the valley from our high vantage point in the Presidential range

We lobbed the question back to him before we gave the answer. He was game. Oh, late forties, early fifties, I’d guess.

Well, then we thought he was an exceptionally nice young man, even if he’d shined up his answer for us….

Sixty? No, get out. You’re kiddin’ me. My mother wouldn’t climb a mountain. His lovely New England twang rings in my ears to this day.

Pure ecstasy it was to reach the car and shed our boots and packs.

Two lanky, well-muscled girls in their twenties who’d bunked with us, were slumped against their car. They’d hiked down from Lakes of the Clouds in one day and they were utterly wiped out.

We just want a motel with cable TV. So we got out the guidebooks and gave them some leads, and we felt like a million bucks. 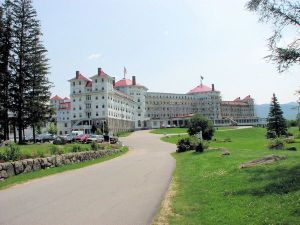 Entrance to the Mt. Washington Hotel in Bretton Woods

Route 302 takes you past the old Mt. Washington Hotel where the Bretton Woods Conference was held in 1944 to tackle the world’s post- war financial future.

It’s a rambling, red-roofed building tucked into the woods whose luxury now seemed unreal after seeing it as just a speck from the trail.

Why not? But let’s comb our hair first.

We sat in comfortable old wicker chairs and sipped iced tea on the veranda, luxuriating in understated turn-of-the-century elegance.

For a while we watched a little girl lob tennis balls to her handicapped brother. How patient she was. How hard he worked to return the shots. Again. Again. One ball at a time. Like climbing a mountain one step at a time.

Tennis courts from the veranda. Mt. Washington, the tallest peak in the Presidential range, is in the background. Not so dramatic here

We talked about our adventure. How different the trip had been from our expectations, how many twists and turns it had taken.

We talked about the people we’d met and how kind they had been and how grateful we were for the help and encouragement they had so freely given when we most needed it.

We watched the clouds drift across Mt. Washington, and we were quite content. We decided that maybe we wouldn’t fall apart just yet.

That night we had a glass of wine with dinner and planned our next adventure.