(In deference to the Master of Light, this article is illustrated by Monet’s garden paintings.  Slide shows of our photos present the garden in May 2010: first, the main two-and-a-half-acre sun garden,  or Clos Normand, then the pond with waterlilies and Japanese bridge.)

This is one wild and woolly garden! Color and light dance a jig in squinty sunbeams that dash through the garden and round the pastel house and over the fields. Arbors drip clematis and roses. 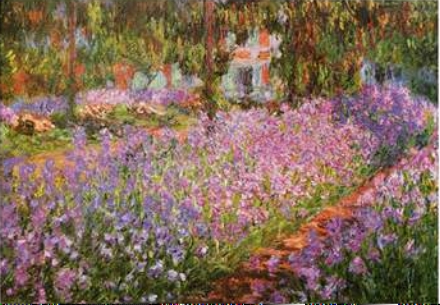 Iris, thousands of them, shimmer as far as the eye can see, stem to stem with wallflowers in all colors spilling into every nook that isn’t already tucked in with pansies (retiring now in deference to the season), and allium, peonies, poppies, eremurus, dianthus and more. 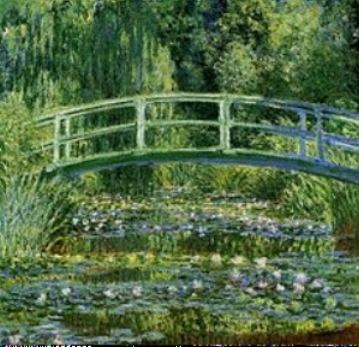 The bloom around the pond is no less exuberant, though here sunshine slows to a waltz under a canopy of willows, bamboo, and flowering trees. . .

. . .where waterlily pads reflect a brilliant sun but hold their blooms tight til it’s their time in summer.

This is a Garden of Joy, a reflection today of Monet’s love for Giverny that for him constituted his greatest work of art. 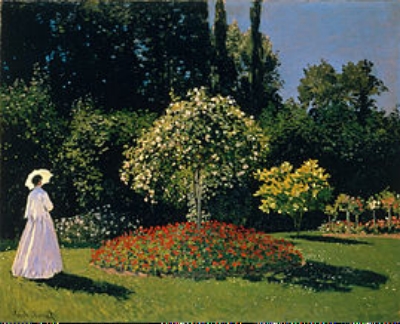 We saw Woman in Garden 1867 at the Hermitage in St. Petersburg, Russia

Is there a summer encore? Could there be an encore?

The answer is yes, of course. Whether you choose to go in April, soon after the garden opens in spring, or in October, before the garden goes to sleep, you will find bright color from annuals, bulbs, late blooming perennials and chrysanthemums.

But for us who visited in late May, the light of the garden is fixed in springtime. 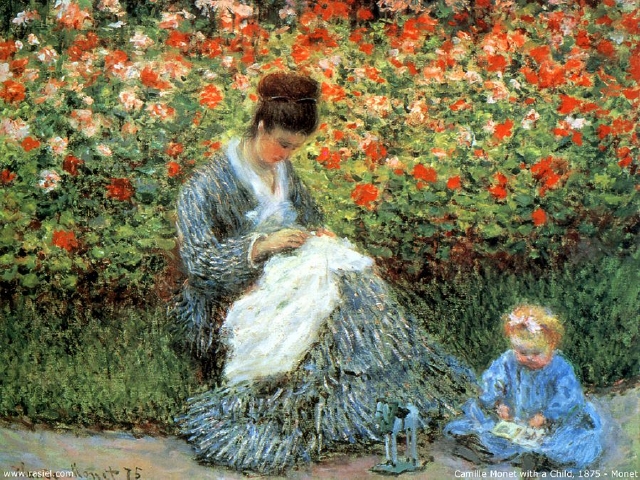 This seat of color and light was a long time coming. Monet was born in 1840 but it was not until he achieved a measure of financial and critical success in the late 1880’s that he could afford to purchase Giverny in 1890, about 50 miles west of Paris near Vernon. 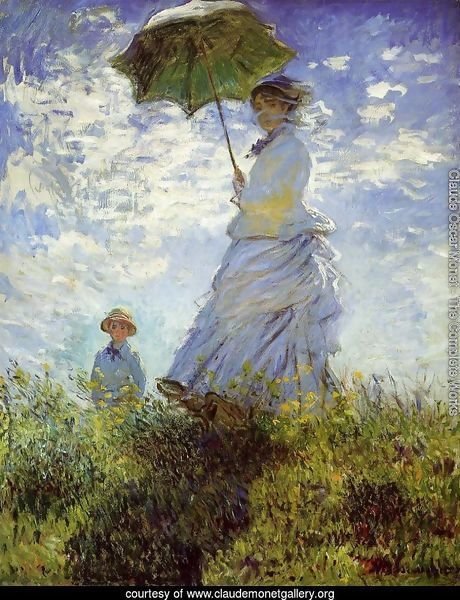 During those five decades Monet had pursued his inner eye, seen his artistic efforts ridiculed as “sketches,” or “impressions,” instead of completed paintings; endured poverty; lost his beloved first wife; fought with bouts of depression; and — desperately poor after his first son was born — tried to commit suicide.

Through it all he kept painting and eventually he became the leader of a band who called themselves Impressionists.

When he arrived at Giverny this Master of Light and Color must have felt that he had come home. No doubt the artist’s colony that thrived there until World War I added to his pleasure. 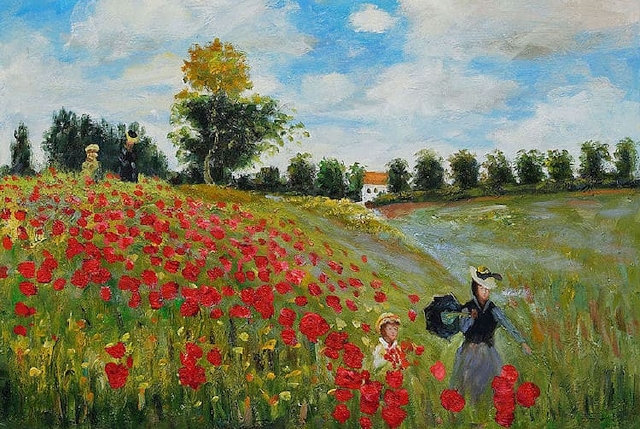 Monet had always been an avid gardener, drawn to changing light and color in these patches of the natural world. 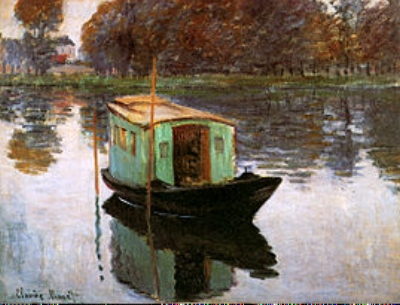 Giverny would become his living palette. He planned the garden in minute detail, researching color and bloom time of plants.

He added acreage and dug ponds and planted native water lilies along side colorful cultivars from South America and Egypt.

He kept meticulous records of plant purchases. He developed a library of botanical books. Daily he wrote out specific instructions to his gardener. 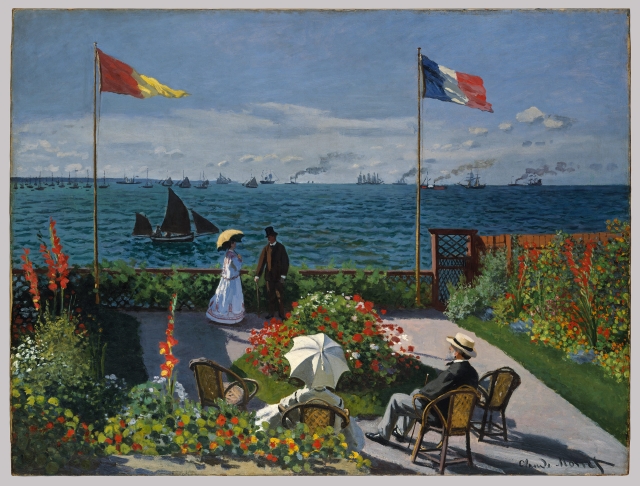 The Garden at Sainte Adresse 1876

And always the flower bed under his window was kept planted in memory of his beloved aunt. It was an exact copy of her flower bed that he had painted at her home in Sainte-Adresse. 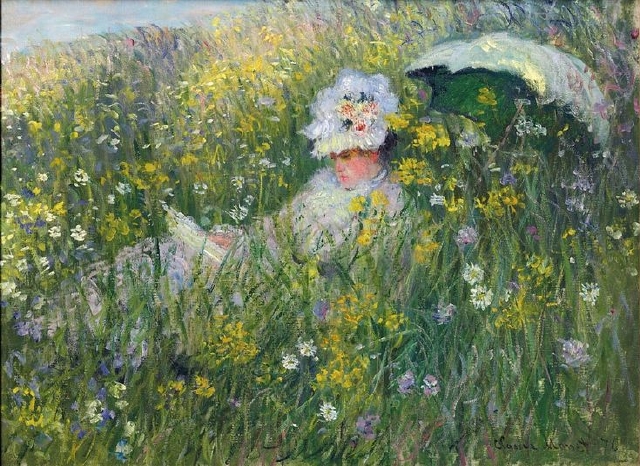 As his wealth grew, his garden evolved, but he remained its architect, even after he hired seven gardeners. He acquired property across the road and converted part of the stream that ran through it into a pond.  The neighbors objected strenuously, fearing that his exotic plantings of waterlilies and bamboo and willows from around the world would poison their wells. 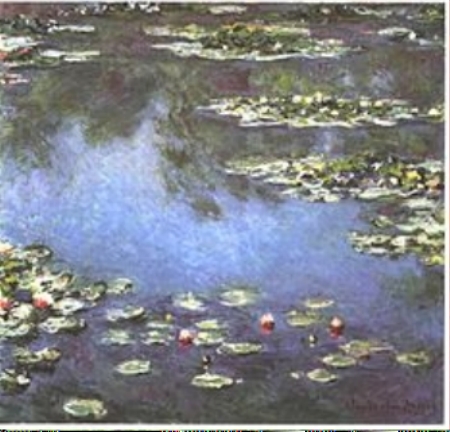 For the next twenty years or so, Monet would paint waterlilies, observing them for hours and capturing their moods.

He also completed a series on weeping willow trees as a tribute to fallen French soldiers in World War I.

As his eyesight dimmed from cataracts, and he began painting from memory, his art became more and more abstract. 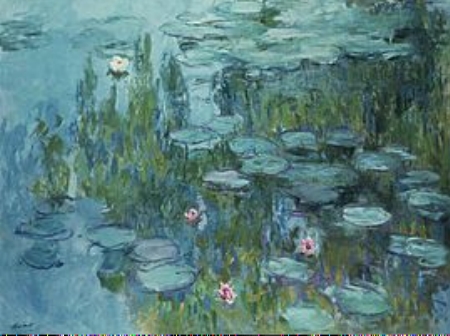 Nympheas 1915. As Monet’ cataracts grew, his palette tilted toward blues

It was a monumental task.

He wrote to a friend, “These landscapes of water and reflection have become an obsession for me. It is beyond my strength as an old man, and yet I want to render what I feel.” 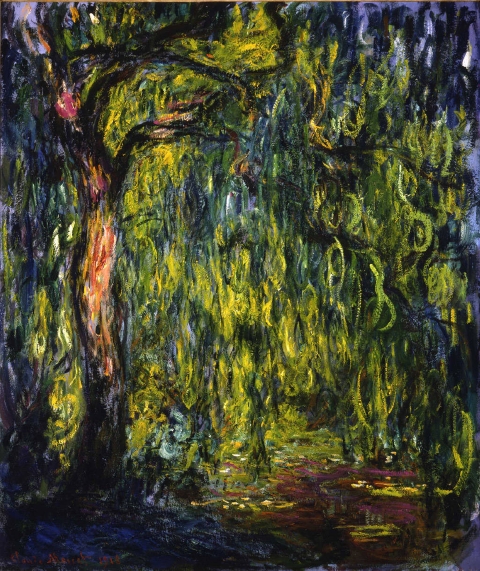 Weeping Willow, 1918-19, an example of a later, more abstract style

The paintings were donated to the Museum at the end of World War I to create, he said, a “haven of peaceful meditation,” that would soothe the “overworked nerves” of visitors.

And so we paid our homage to Monet’s Nympheas at La Musee de L’Orangerie.

It was difficult for us to reconcile these muted, even drab panels with his earlier brighter works that featured such a lively and sometimes complex dance between light and color. 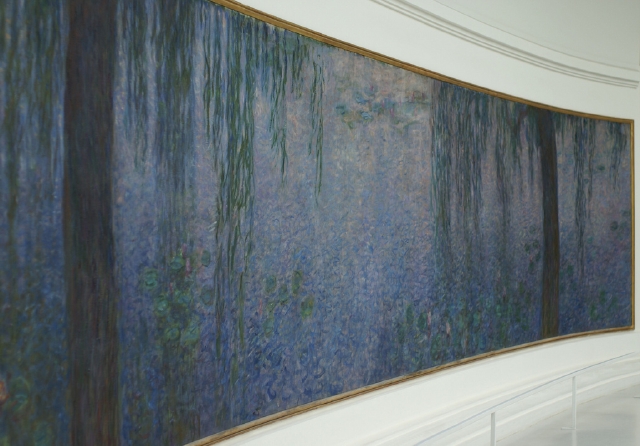 Many of the panels were dark and sparse. Yet there was a certain magic to them. As we sat for a while on benches and spent some quiet time – welcome hiatus from promenading along Parisian boulevards — the panels began to grow on us.

Self Portrait in Beret 1886

Other visitors were apparently at once enchanted.

Cameras flipped out and families photographed themselves in front of panels, and apparently no one but me minded the photo flashes. I couldn’t help thinking — though these paintings were not my favorites – the grand presentation here created a more thoughtful and far less athletic effort than the usual romp around museums.

The Gardens in Sun

In the slide show below we’ve tried to catch the joie de vivre of Monet’s garden as it has been recreated today. You’ll see lots of iris in all colors, and wallflowers, so popular in Europe, and allium and forgetmenots and tulips and peonies, full blown and in bud, and clematis and a solo Dutch iris and the dramatic Eremurus ‘White Beauty’, commonly called foxtail lily.

Here is where Monet spent hours painting waterlilies. Early paintings were vertical compositions that included one of the most familiar — and beloved — images in Impressionistic painting — the Japanese bridge that straddles the pond.

We walked around the pond and found native (to the US) azaleas, spectacular rhododendrons, romantic wisteria, wild roses, forgetmenots, and yellow flag (Iris pseudacorus). One slide, a New York Times photo, shows Monet on his bridge in 1922.