Every so often we invade New York City. We crash at my sister’s apartment. (She owns the refrigerator you might have read about in an August 2017 post,  (Edible) Food Does not Grow in Refrigerators. Or, you can pick up the refrigerator thread in the link to the Union Square Green Market listed below). 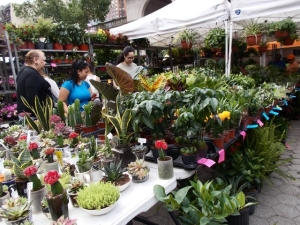 There might be five or six of us – there might only be two of us. Each day is a marathon of museums and theatres, dining, gabbing and gardens.

One day we walked across the Brooklyn Bridge for pizza. One evening we had a late dinner on McDougal Street followed by a stroll through Washington Square.

If we’ve been to the theatre, we’ll meander back to our digs, or swing down to Little Italy for late pastry and coffee before we catch a cab or bus back. We’re usually in by midnight, but sometimes the clock threatens to turn us into pumpkins.

Stone by stone, parts of the Cloisters were shipped from France and painstakingly reconstructed

Whatever we plan, there is always a visit to a garden. It might be the High Line, or the Cloisters, or a lovely neighborhood park, or a Farmer’s Market. Going further afield, romantic Prospect Park in Brooklyn and the dazzling Bronx Botanical Garden are in the works, along with visits to “pocket parks,” or neighborhood green spaces.

When we want a mid-day rest or light lunch, we head for the Museum of the City of New York, opposite the Central Park Conservatory Garden on Fifth Avenue. We spend some quiet time viewing its excellent permanent exhibit, New York at it Core: Money, Density, Diversity, from Henry Hudson to the present.

A view of Central Park from the Conservatory Garden

We try not to miss Central Park. My sisters and I grew up loving Central Park. Our parents would ferry us from Queens to Manhattan and we would spend the day climbing the rocks, feeding the pigeons, skipping stones into the lake, riding the carousel.

We laughed at the seals when they clapped and barked (for us, of course), and munched on peanuts and crackerjacks to find the prize in the box. We would come home very tired but very happy.

Chrysanthemums coming into bloom at the Conservatory Garden

We didn’t know at the time (nor would we have cared) that Central Park was one of the finest parks in the world. Nor did we know that its designer, Frederick Law Olmstead was a visionary who created landscapes that beckon people to shed their street-lives and come and play.

Back in the 1970’s our casual rambles around the city would not have been comfortable.

Graffiti and garbage, drugs and crime had smudged a city that couldn’t pay its bills because its finances were in such disarray. 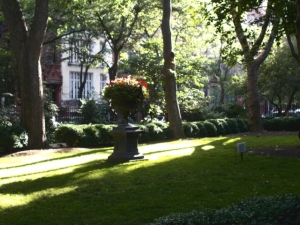 Parks and gardens, once oases from brick and mortar, became low priority, turned seedy, and, sadly, enhanced the decay of the city.

Today, the city and the gardens have a new look, a new creative atmosphere. 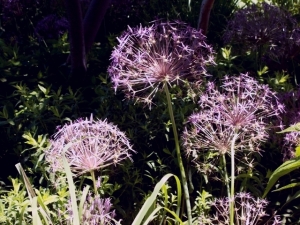 Alliums on the Hi Line, the latest venture in New York City parks

It took a combination of public and private funding and can-do New York City gumption and talent to get the gardens growing again. And growing they are. Spectacularly! We are racing to take full advantage of these lovingly tended gifts.

New York Frolics is dedicated to the green spaces in New York City that we have already explored and hope to explore in the future. Here are our first entries.

The Cloisters and their Gardens 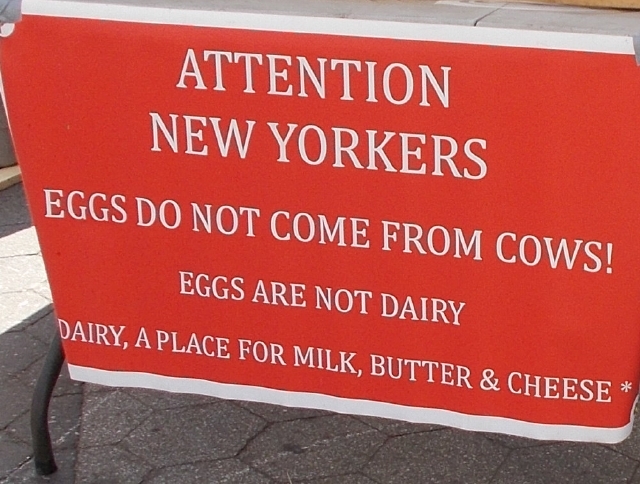