The Gentlest of Seasons

Posted on November 6, 2013 by aheronsgarden

Fall is settling in. I can feel it as I walk through the garden. The sun’s light is still sharp but it has lost its ferocious heat. On this bright day insects bob from daisy to daisy to find a final, quick meal of nectar. I disturb them as I pass and they explode, startled, not exactly in swarms, but busy enough so I think I must dodge them. They are so quick they beat me to the dodge.

Not so with butterflies. They are not such good dodgers. Near collisions still surprise me. Butterflies are everywhere this year. On chrysanthemums, late sunflowers, asters, salvias, camellias. What a feast for the eyes.

Two months ago, about the time the tulip tree was littering our lawn with big, burnt, crusty–and untidy– leaves, I made a solemn vow to quit gardening. The heat had wiped me and the plants out. Vines were scraggling, leaves hung brown, and some plants had been eaten to death.

One of the busy bees on a full blown chrysanthemum

Listen to the Litany of the Tatters: broken ferns, frayed solomon’s seal, blotched hydrangea leaves. Oh, quichyer whining, you say. That’s only the usual fall die-off. Wait, I say, now we get to the drama.

Vexed knockout roses, not looking at all like those glorious shrubs I’ve seen in full sun and sharp drainage. Mushroom root rot is attacking from below and there’s no stopping it. Shriveled, drooping buds are a sign plants will eventually die. Well, that’s what you get when you garden in crayfish territory among tall pines. Something must be done, but not yet. I’ll think on that.

Azalea caterpillars, they’ve stripped this year’s growth bare of leaves. Their red heads are a stand-out which makes them easy to identify. I’ll have to do something about them, too, not sure what, since we avoid chemicals, and I don’t know their life cycles. But they’re gone now, so that can wait till next spring.

Euonymus scale, it’s disfiguring boxleaf euonymus, first time ever in twenty years. Maybe I’ll chop the plants down when I get ambitious. Maybe. Or maybe just spray them with horticultural oil. Not right away, though. They’re hardy, they can wait. The deer have done a nice job of keeping them pruned to size, but I haven’t noticed any nibbling lately. Maybe deer don’t like scale.

Well, that’s a garden for you. Where plants are growing, one wily feeder or another will step up to take advantage. So why, in this season, do I feel so contented as I walk this plot that’s more like a battlefield strewn with disaster by armed warriors and underground guerillas than a sweet, garden-magazine oasis?

Well, except for those exuberant sunshine feeders, the garden is mellowing. Springtime is hurly-burly, a rabbit-race to outshine or outstrip. Buds can’t wait to break and leaves can’t wait to unfurl. Attack insects form up to dine, wait at their posts, having been strategically placed there by now-deceased-but-forward-looking-egg-laying parents.

Autumn, on the other hand, is a turtle race, which is closer to my pace. Life is slowing. This year’s battles are pretty much decided by now. Some wins, some losses, depending on whether you are a gardener or a bug, a deer or a rabbit.

Forward-looking plants are quietly setting the stage for next spring’s race and offering up their gifts of nectar, pollen, berries and seeds to allies. This is not altruism, I know. Their long-term survival is the ultimate ulterior motive. But it sure makes the garden interesting.

Perilla spreads its mischief. I’ll be sorry next spring but look at it now

Perilla seed heads gleam in afternoon light. I know I should have cut them down as soon as the seeds formed, but they are pretty, and I love those purple-leaved plants in summer, and goldfinches feed on their seeds in fall. Now it’s too late. The seeds have fallen. Oh well, I’ll wait till next spring to yank them out and somehow deal with a thousand seedlings.

It occurs to me that maybe I enjoy the garden so much in fall because I don’t have to do anything. It’s too late now to do what I should have done last summer, and it’s much too early to even think about spring chores. I could do some clipping and nipping, set the garden to rights like most normal gardeners would. But I rationalize that birds will lose their ground cover and miss scratching for seeds if the beds are too tidy. And I refuse to fret about those far-sighted insect parents who have laid the groundwork for next year’s battles.

So I can amble. I can play. Maybe tomorrow I’ll rake some leaves around plants to keep winter weeds down, or maybe transplant a few things. I don’t have to be a garden monitor for a while. I can play.

I make too much noise as I open the gate and I startle a young gray fox from under a shrub. His sudden movement startles me, too. Both of us had taken our aloneness for granted. We stand eye to eye about five feet apart. My god, he is healthy. His coat shines with a hundred shades of gray and russet and brown. His eyes are bright. His ears are perfect. He is flawless. Next to him I feel lumbering and flawed. 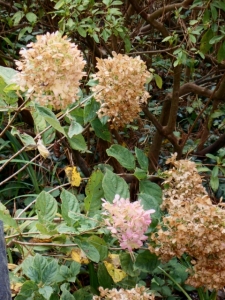 He is wary. We are both wary. My half-hearted attempt at soothing murmurings (Has he heard my voice before?) does not particularly interest him, nor does it alarm him. He hesitates. Finally, this close encounter becomes intolerable. He scrambles up and over the fence and disappears into the woods. I wonder if I will see him again.

A sleek young doe is browsing, not aware that I am watching her. Does she owe her extraordinary health to tonics from our garden, or am I being prideful? Yesterday she did us a favor by nosing through fallen crabapples before we walked all over them. Last week she hung around watching Bob and Tim repair some steps, but when they spoke to her, she romped off. Edgy bucks are rutting now, so hanging around humans who don’t speak may actually be a pleasant pastime.

The tatters fade as I look around and find vibrant berries on a viburnum, bright red leaves on blueberry bushes and Virginia creeper (did they turn over night? Last fling?). I see chrysanthemums spilling out of bounds and dancing seed heads of grasses and fresh new clematis blooms. If I look closely, I can find fat new buds that will speed-dial into blooms next spring.

A plump rabbit keeps several paces ahead of me as I walk. Does he look so fine because he’s been eating the violets? I

don’t begrudge him, though chewed-on stems don’t add much to the look of a garden. Young cardinals are hanging around the empty feeder waiting for a fill-up. Their feathers are smooth as silk, and they glow with health, and I am content.

The mockingbird scolds me for trespassing on his territory, which is every berrying tree on the place. Hush, I say, to the berry-hog. I am enjoying my garden in this, the Gentlest of Seasons.

Camellia ‘hana jiman’, another bright spot in the garden