Posted on September 4, 2013 by aheronsgarden

While I was doing routine fact-checking I uncovered so many compelling stories that I felt I could not talk about our small involvement without first describing the events of that stormy day. One post became four. Parts I and II tell of the storm and its immediate devastation; Parts III and IV follow up a year or more later.

Like most everyone else in the country, we were caught up in newscasts about the catastrophe in New Orleans and didn’t understand much about what was happening along the Mississippi coast. Memories of the fine time we had enjoyed there were hazy, and communities that were a thousand miles away seemed little more than dots on a map.

Land denuded except for oaks. Note the lean away from the shore

That perception was to change a year after Katrina, when Bob and I arrived in Waveland as part of a work crew of Master Gardeners. The project was the brainchild of a Pasquotank County Master Gardener who had taken it upon herself to spearhead a restoration of community gardens in coastal Mississippi.

The idea took on life after it was publicized at a North Carolina State Master Gardener conference. Once word went out, plans needed to be coordinated with the Hancock County Cooperative Extension Service in Hancock, Mississippi, funds raised, volunteers recruited, housing and meals organized, heavy equipment arranged for, plants to be trucked in, and top soil, fertilizer and mulch supplied.

Sign: STORM DEBRIS IN WATER DO NOT ENTER Note pile drivers working on bridge in background

Whew! A passel of logistics, but enthusiasm and top-notch organization made the plan work. Prior to our work week, volunteers organized and staged plants that would be transported to Mississippi by the nursery in Currituck County NC that donated them. Once the plants were safely on their way, ten of us from six counties in northeast North Carolina and Chesapeake, Virginia, would spend a week getting our knees dirty in Hancock County, Mississippi.

Here is our group, The suits are school officials

Our tasks were to landscape a complex of three badly flooded schools several miles inland in the town of Kiln, north of Interstate 10, and to replant a simple memorial garden at Christ Episcopal Church. By the time we arrived, one school had been razed and replaced by modular classrooms. Repairs from flood and wind damage were still going on in the other schools.

A haven for weary aid workers

Before Katrina, the Church sat high on a bluff overlooking the Gulf. Only its battered belfry and a shredded banner remained to identify it–the sanctuary swept away by a 35-foot combination of storm surge overtopped by breaking waves. A quonset hut now replaced the church and this doubled as sleeping quarters for volunteer work parties that came and went in a continual stream from all over the country.

Ready to work on the memorial garden

The memorial garden, once landscaped with handsome granite headstones and roses and boxwood, had been scoured into a trench, brickwork broken apart, shrubs torn away. We improved the soil by rototilling it and adding potting mix. Then we replanted the garden with periwinkle we’d dug from our garden and pansies we purchased for color from the local Wal Mart that was now fully up and running. Replanting the garden would become a symbolic gesture of hope. Two weeks after we left, the pastor of the church would be married in the garden.

Mark is making quick work of the mulch pile

When we arrived on school grounds, the first thing we saw was a mound of 50 yards of mulch that had been supplied by the school district. This needed to be transported to planting sites at the three schools by pick-up trucks and then rototilled in. No small feat, since each truck could hold only about two yards.

Oh my! Lots of shoveling. Again, good planning and enthusiasm carried us through and we were spared heavy labor. One of our work crew had taken it upon himself to transport a front loader and assorted tillers and heavy equipment the 1000 miles from coastal North Carolina to our work site. Once the soil was prepared, we worked quickly, assembly-line planting. No one ever counted, but the numbers we planted must have been in the hundreds.

People were so appreciative of our help. One evening we were invited to a Mississippi feast. Sheets of plywood with sawhorse underpinnings were set up along the sidewalk and covered with paper tablecloths. We ate magnificent, positively gluttonous, servings of the most delicious shrimp we’d ever tasted – oh, those Gulf shrimp—out of big serving bowls, along with red potatos, and drank the coldest Red Dog ever.

Our hosts’ home in daylight

All this in the company of warmhearted hosts who were still housing three generations of family in cramped quarters and still living under a roof of blue tarps. Those paper tablecloths? We crumpled them with our shrimp shells, and presto, the plywood and saw horses were back in construction mode.

It was a quiet, starry, night, so Bob and I walked back to the FEMA trailer on church grounds where we were staying. 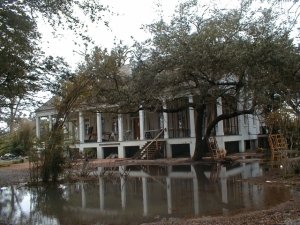 From the road this house looked rebuildable. Up close. . .

Under the stars, storm desolation didn’t seem so stark. Night shadows softened the scruffiness of weeds that hid a mosaic of concrete slabs and camouflaged the junk that Katrina created when she robbed people of fond possessions and tossed them into trees. We picked up a plastic Frosty Snowman that still blinked when it was plugged in and we left it with the church. Maybe someone would enjoy it during the holidays. 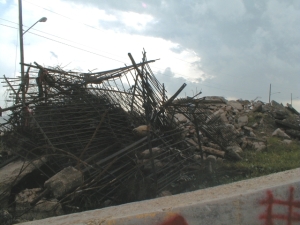 Debris piles, some created by Katrina, others by people clearing property

By daylight no shadows camouflaged the land. Brick steps rose to no homes. Odd pillars marked no entry. Walks led nowhere. Plywood boards spray painted with names and addresses and posted on trees–there are no landmarks now–affirm boldly, garishly, that someone once lived here. 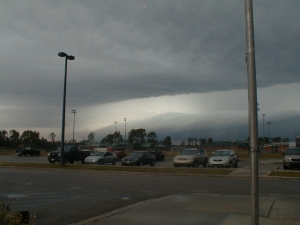 A stroll with no destination uncovered moments in time: an upright rocking chair, a coat hanging on a twig hook, an intact birdbath, a bruised doll. The crusted but elegant vintage 1930’s watch we found remains on our desk as a reminder. We wonder where the owner is, what happened to her.

Signs of black humor and bitterness gave us pause. A bistro table and chairs theatrically arranged on a barren rise. A plywood poster: State Farm Sucks. Signs of patriotism, too. American flags everywhere, big and imposing, tiny that a child would wave, frayed, or fresh looking.

Our planting beds got a good watering

We spent another evening at a wonderful potluck party at the new home of a Hancock County Master Gardener who had lost everything and now was beginning again. She felt herself to be one of the lucky ones. Before Katrina, the Master Gardener group was 32; now there were 8. A year later and so many have not returned. But that evening was jolly, and again we ate too much. Lots of good cooks along the coast.

Master Gardeners all, we have a common language. Our project organizer Ruth seated, in red

Oh, the stories. Told simply, sketchily, matter-of-factly, and with amazing good humor. Of being thankful the floodwaters ebbed before they had to climb up to the roof. Or of coming back home and finding everything gone. Of wearing the same clothes for two weeks straight. Of being called “slab people” and living like nomads in faraway states. Of sleeping on floors, among strangers, rotating from house to house. And the mix of bad smells—mold, decay, sewage–that seemed to stay around forever. No drinking water. No showers. No place to get a cup of coffee. No place to get a cup of coffee.

We travelled this parklike road to and from the beach. Once there were houses all along it. Photo by Margie Kieper

Of greeting friends they’d missed with an ecstatic “You’re Alive!” Of being denied entry to sound homes because sewer and water were unavailable. Of the ugliness. Of being dependent on help and handouts. Of bureaucracy and greed. Of shock, bitterness, depression and isolation. Of losing, not their lives, but the fabric of their lives. Yet, they said, it could have been worse. “It’s not the worst thing that could happen to you.” They had come through and survived.

He only looks like the lonely rototiller; we were planting right behind him

Signs of survival, even normalcy, are all around. Signs for building contractors, real estate agents, candidates anxious to win elections. Rebuilding is everywhere, on and away from the coast.

One optimist is recreating an East Wing, or guest house, of what will eventually become his personal White House overlooking the Gulf, though right now he is having trouble finding supplies.

A pizza break. No, we weren’t always eating

Pile drivers sound for all the world like ghosts thumping at night, but they are very real, working to restore washed-out bridges.

A temporary ferry is finally in operation, though it can’t replace the broken bridge.

We hear train whistles in the night, too. Long-silent, they are sweet song to needy, isolated people.

But there is a long way to go. There are few gas stations and grocery stores. Casinos are up and running, and business is brisk. And nursery schools, too, those humble foundations of economic prosperity, have reopened.

And there are ingenious handmade decorations for Hallowe-en. And what must be a hundred coffee cup signs; yes, the Mockingbird Café has opened in Bay St. Louis and yes, you can get a good hot cup of coffee for $1.50. 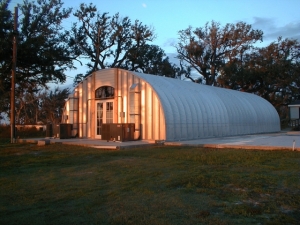 The sun casts its spell

At sunrise, when the land is silhouetted against a deep blue sky a sweet rosiness blurs the warts. Even the church-quonset-hut takes on an air of hope in the rising sun. The second, new banner behind the belfry that reads God is With You speaks profoundly of these Mississippians, their resilience and grace, faith and pride in community and country, determination to get on with life, to make the best of things despite the odds.

As we leave, we realize that the live oaks, denuded by Katrina in 2005, had begun to put forth new leaves this year.