Posted on September 1, 2013 by aheronsgarden

Major communities along the Mississippi coast. The Pearl River, Hancock County is the state line.

While I was doing routine fact-checking I uncovered so many compelling stories that I felt I could not talk about our small involvement without first describing the events of that stormy day. One post became four. Parts I and II tell of the storm and its immediate devastation; Parts III and IV follow up a year later. 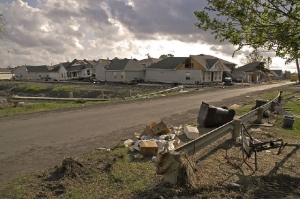 Storm surge in St. Bernard steamrolled houses into one another

Before we visit the Mississippi coast, let’s detour a moment to  Plaquemines and St. Bernard Parishes southeast of New Orleans, where Katrina made her second landfall. This is low country, bayous, more water than land, nourished by the Mississippi River which flows through these parishes into the Gulf.

A mosaic of levees and canals buttress  communities, but Plaquemines and St. Bernard were destroyed even before Katrina’s official landfall. Her storm surge of 15 to 25 feet rolled over the land, preceding her eye, breaching levees. Most people had evacuated from

Plaquemines. Those who remained in either parish tell of violent currents and water filling lower stories very quickly, in about 15 minutes, trapping people. People survived by waiting for rescue in upper stories, or they drowned. It took about a week for the water to drain.

St. Bernard was the only parish/county to be totally inundated by Katrina, this from an unanticipated one-two-three punch. The first blow, described above, came from the south and east. The second followed when the Industrial Canal Levee, the boundary between New Orleans’ Lower Ninth Ward and St. Bernard, failed, and water poured in from the west. 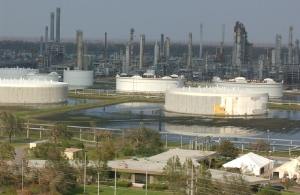 Finally, a damaged storage tank contaminated floodwaters with millions of gallons of oil. A foot of oily mud remained after the water was pumped out. Of 26,900 homes, there was not a livable house in the parish. Everyone in St. Bernard had a story to tell, but it was the same story: I lost my home and everything in it. 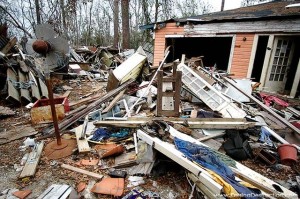 The rural community of Pearlington MS, about 8 miles inland on the state line, was not so lucky, either. It caught Katrina’s eye as she made her final landfall. Few buildings withstood the wind and water. Many people stayed in their homes because they had weathered Camille in 1969, and, after all, they lived several miles inland. They did not count on the strong storm surge up the river that had given the town its name. From accounts by Katrina survivors, their ingenuity and common sense, faith in God and sharing with and caring for neighbors helped keep them alive in the aftermath.

Eventually the bulldozers would get to the town

Nevertheless, the town was destitute. Ten days later, when a state emergency response team from the Florida panhandle arrived, they found that “The town had nothing but a place to get water, ice and military-issued meals. There was no Red Cross or shelter. The homes were heaps of debris, and trees and nail-studded boards littered the roads. The people – perhaps 600 of the 1,700 residents that remained – were living in tents and under tarps.” According to a CNN report, six weeks after the storm, FEMA hauled away portable toilets and did not replace them. The citizens of Pearlington called themselves the “forgotten” people. 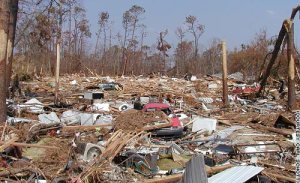 Everything leveled. Note the car on top of the pile. Stressed trees will lose their leaves, even if they do not die. Photo by Carl Schott

The surge hit the coast some time between 7 and 8 am. That is when the 911 calls began to come in to operators, mostly screams. That is when most fatalities occurred. For three hours the surge piled water onto the land, peaking around 10:30 or so before it began to recede. Search and rescue missions would determine locations of bodies by recorded 911 calls. As houses were searched, they were marked; if bodies were found, a number was written under the mark. Along the Mississippi Gulf Coast, 238 people died and 67 people went missing during flooding that was beyond the imagination of anyone living there.

The surge overtopped Rte 90, the Hospitality Highway we talked about in Part I. It twisted up the railroad tracks and broke up the railroad bridge. It reached as far inland as 12 miles, using rivers and bays and estuaries as a conduit for its relentless push. It tore up the bridge that crossed St. Louis Bay, so people in communities on either side of the bay were now isolated. Further north, it took out swaths of Interstate 10.

A year later the litter would be cleared but the beach would still be off limits.

Waveland, “ground zero” in Hancock County, has been described as an ideal Small Town USA. The kind of town with white picket fences and good neighbors. It lies in a narrow strip along the coast and extends north beyond the railroad tracks. Katrina’s eastern eyewall with its storm surge of 27 to 30 feet overtopped by 5 to 7 foot waves blanketed the town.

Along the town’s 7-mile beach front, not one building or home was left intact. Further inland, few structures remained. Houses were floated off their foundations, some dropped on railroad tracks, others left in roads or pushed into other structures. Block after block of slabs were the only landmarks left for identifying houses. In the neighboring town of Pass Christian on St. Louis Bay, wave action and surge currents working at cross-purposes pushed wreckage into piles that were 30 or 40 feet high. To these piles people would add personal belongings, appliances, wallboard, and the rest of their past, as they gutted their homes. 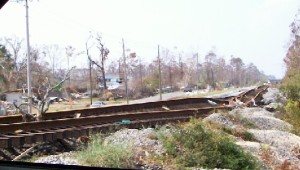 The railroad tracks parallel Rte 90 a couple of miles inland

Although the railroad tracks acted like a berm, slowing the water, homes as far inland as 10-12 miles were flooded. Eyewitnesses describe water creeping under doors and through windows and quickly filling lower stories, giving residents barely enough time to escape to upper stories before furniture and refrigerators started floating and acting like missiles in the swirling water. 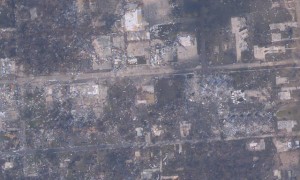 The Hancock County Emergency Operations Command Center was set up in the county courthouse in Bay St. Louis. As the water began to rise, and not knowing how much higher it would go, everyone wrote a number on their bodies with a magic marker. A list of names and numbers was tacked high up on the wall. The floodwaters held, but it is worth noting that every EOCC along the coast was flooded. 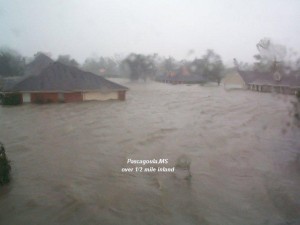 Susan Stevens, a social worker and manager at the hospital in Hancock County, wrote movingly about her experiences during the storm. Our condensed version here can give only a glimpse of that day.

As the lower story of the hospital begins to flood, patients must be moved to the second floor, carried upstairs on stretchers when generators fail and elevators are no longer working. All equipment, oxygen, food and water stored on the first floor is destroyed. By now roads are flooded and the bridge is destroyed and communities are isolated. The hospital is operating without basic supplies and power, with no communication outside the county.

Yet the hospital must become an emergency haven for hundreds of exhausted, dazed, injured, dehydrated people who come on foot, or are carried in on table tops or doors, or come off the beds of pick-up trucks. There is no other place for them to go to. They come from all over needing medication, treatment, a peanut butter and jelly sandwich, a kind word and someone to listen to their stories of mass destruction. No one is prepared for the numbers who did not evacuate and have lost everything. Hospital staff work well into the night using flashlights, but they have no idea of what has happened to their own homes and loved ones. It will be two days before they can take the time to assess their personal losses.

What remains of the Marine Life Oceanarium in Gulfport. Some dolphins spent the storm in hotel swimming pools, others were swept out to sea and later rescued

Details vary, but Waveland’s story is much the same for the entire Mississippi coast and into Alabama. Destruction comes from wind, yes, but most especially from storm surge. Because the storm is large, the storm surge remains powerful along the coast.

Gulfport: most of the city is destroyed or flooded, including the Marine Life Oceanarium. Shipping containers are scattered like spilled dominos around the flooded port. 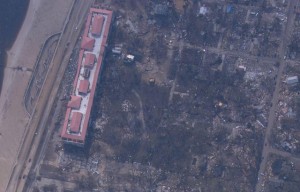 Biloxi: largest city on the coast, is known for its casinos on barges. Katrina’s storm surge shook casino barges off their moorings and propelled them like battering rams into buildings on land, which in turn became weapons that pushed houses off foundations.

Jackson County is divided—and was flooded–by the Pascagoula River. Interstate 10, damaged by flooding, became impassable after a boat floated onto it. As in other counties, despite orders to evacuate, many people stayed, preparing for wind, not water. The city of Pascagoula was 80 miles from the eye, but 95 percent of its homes were flooded. In fact, no inland communities in Jackson County escaped flooding. As in Hancock County, inland resources could not be counted on for recovery.

Flags rise all over the coast even before clean-up begins

Katrina swept into Alabama, too. Flooding engulfed downtown Mobile, and water covered the I-10 causeway over Mobile Bay. The coastal communities of Bayou La Batre and Coden, shrimping centers, were destroyed. Joseph Rodriguez, a fisherman, counted 87 boats tossed from port and deposited hundreds of yards inland, with about 30 landing up in the woods.

(Nobody could foresee that five years down the road, when fishermen in the Gulf have finally recovered from Katrina, they will reel from the BP disaster.) 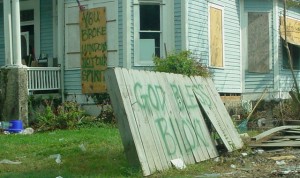 Many people left and never came back. But those who stayed, stunned, lost, pulled themselves together and began the wearying task of cleaning up. Days before help came, they began to gut lower stories and clear property of debris. American flags were raised and plywood boards with upbeat messages appeared. But there is a long road ahead, years, a long, life-changing recovery from loss and debt. As we shall see, help would come from people all over the country.

A Waveland street, cleared after Katrina

Damaged belfry, the only part of Christ Episcopal Church left standing at the edge of the Gulf in Waveland, surrounded by tattered live oaks and  piles of debris where once there were homes. Photo courtesy Duke University

Details about Katrina and the Mississippi coast come from Margie Kieper’s series, Katrina Storm Surge published on the Weather Underground web site and from accounts in Wikipedia, NOAA, and newspaper articles. Most photos come from FEMA and NOAA. archives.