The Invisible Coastline: Part I

While I was doing routine fact-checking for this post I uncovered so many compelling stories that I felt I could not talk about our small involvement without first describing the events of that stormy day. One post became four. Parts I and II tell of the storm and its immediate devastation; Parts III and IV follow up a year later. 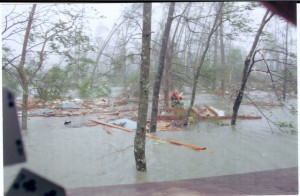 In Waveland MS, taken from the second story during Katrina by Judith Bradford, whose husband swam out to bring this man and two others to safety

Before I begin, please take a moment to imagine yourself in the midst of a scary storm. You have not been properly warned about its particular dangers, but you don’t know that. Now imagine that your home and all your possessions are destroyed, but, hey, you are alive. Maybe you scrambled up to an attic or clung to a piece of wedged flotsam, or a neighbor rescued you. You are cold and wet and muddy. And now you wait for rescue. Maybe your 911 call got through, maybe it didn’t before the phones went out. 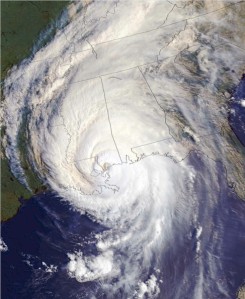 Note the size of Katrina, the eye crossing the coast of MS after passing through the tail of Louisiana

Gradually you realize that your community as you know it is gone, and other communities are hurting, too. Imagine that there is no grocery store, no bank, no gas station to go to. If you could. But you can’t because piles of debris make roads impassible and, anyway, your vehicle has been brined. If you are lucky you have a boat and its motor still goes.

Now imagine that the rest of the country is transfixed by the devastation of this storm. Scenes of helicopter flyovers and dramatic rescues fill the airwaves and newspapers. Except that almost none of this reporting is about what happened to you and your town.

Instead, the news media reports on apocalyptic events in a city in another state. This city did not experience the storm’s power as you did. In fact, its heralded devastation was caused, not by the storm, but mostly by faulty infrastructure. If you can imagine all that, you will have some idea of what the people of the Mississippi Gulf Coast experienced during Hurricane Katrina, and why they call it the “invisible coastline”. 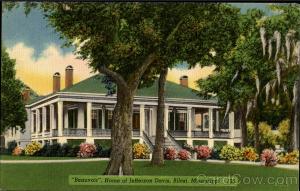 A postcard view of lovely Beauvoir, finished in 1852, antebellum home of Jefferson Davis in Biloxi

Many years ago, on vacation, we took a leisurely drive along Rte 90 on the Mississippi Gulf Coast. Later, as tourism became a hot industry, the 50 miles from Pascagoula to Waveland would be called, according to the map, the scenic Hospitality Highway along the beautiful Gulf Coast, featuring artists’ colonies, fishing villages, resorts and casinos.

What we saw back then were gracious old homes that hearkened back to earlier eras. In some places, where the land was naturally hilly, they sat high, and they seemed grand when you looked up at them. Elsewhere, maybe they were simpler, and they hugged sea level. In fact, most of the houses along the coast were pretty basic homesteads, but they had one thing in common: a sense of antiquity and serenity.

It was warm and cloudless that day, so we weren’t thinking about hurricanes then. We did not ponder that these coastal towns had been surviving fierce storms for, maybe a couple of hundred years. That historic buildings and old homes were still standing. That the inhabitants are rooted here by generations of family, networks of friends, their occupations, and their devotion to God and their church.

The fine Hancock County Courthouse in Bay St. Louis will figure in the next post

They are, we came to discover, a resilient people who live in tight-knit communities that have long histories. They have indefatigable spirit and a trust in God that will uplift them in the face of tragedy and its aftermath. But I am jumping ahead in the story.

A very detailed and complete Hurricane Evacuation Study by the Army Corps of Engineers exists for the Mississippi coast. It covers topography, population density, vulnerability to hurricane winds and storm surge and presents tailored suggestions for response to major storms. There is also a tool called SLOSH ( Sea, Lake and Overland Surges from Hurricanes) that models and forecasts coastline conditions under all possible storm conditions and intensities. It is highly accurate.

Major towns along the Mississippi coast. The Pearl River is the boundary between LA and MS

Yet, despite Camille’s 1969 Category V winds and record-breaking storm surge, emergency personnel did not seem to be aware of study particulars, nor was the general public kept well informed.

A third tool exists, this for communicating with the general public. The Hurricane Local Statement, based on HES and SLOSH findings, informs about anticipated storm conditions in each county affected. The HLS for the Mississippi coast emanates from Slidell, Louisiana. Unfortunately, its televised warnings were general and somewhat misleading, so that many people misunderstood the danger and based their plans of action on how well their location had weathered Hurricane Camille whose winds approached 190 mph at landfall.

Katrina’s path. The bayous of LA do not show on this map

Katrina’s first landfall on August 25th was inauspicious. With 80 mph winds she did little damage as she crossed the southern tip of Florida. But conditions in the gulf favored strengthening and expanding beyond expectations, until Katrina became a Category V storm, measuring about 450 miles wide. By Sunday, August 28th, she was expected to remain powerful at landfall, with the capacity to destroy the coast of Mississippi.

Indeed, the entire coast of Mississippi was destroyed. But not by high winds, which had been the focus of weather forecasts and which, traditionally, inspire primal fear in people. Nor was it flooded by heavy rain; the 8 inches of rain that fell in as many hours did not flood buildings or knock them off their foundations. So what actually happened? 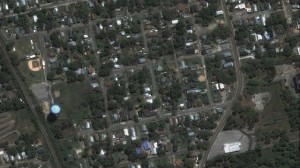 Aerial view of the coast before the storm, a nice place to live

After making a second landfall over the southeast Louisiana parishes of Plaquemines and St. Bernard, Katrina drove northeast to make final landfall on the Louisiana-Mississippi line around 8:30 am on August 29th, a Category 3 hurricane with winds of about 125 mph. Her powerful eastern eyewall passed over the coastal cities of Bay St. Louis, Pass Christian and Waveland, later referred to as “ground zero.”

125 mph? Frightening? Yes. Calamitous? Maybe, if you lose your roof, or if a big tree falls on your house. But most decently built buildings can handle such winds; in fact the Mississippi coast had handled similar winds in previous hurricanes. (Not that we are recommending hanging around in winds like these, but perhaps this explains why so many old buildings along the coast had withstood 200 years of storms.) No, something else was at work here.

The line on this belfry in Waveland marks 35 feet. Additional height is added by waves generated on top of storm surge

Immediately prior to Katrina’s final landfall, an unprecedented storm surge of 25 to 27 feet broke over “ground zero” at high tide. Because the storm was so huge, and the east face so powerful, the entire 90-mile coast into Alabama experienced surges of 18 to 27 feet. A hundred communities were battered.

If you have a picture of storm surge in your mind as a wall of water rushing onto land faster than a speeding bullet, erase it. Initially, a storm surge can seem like a benign turn of the tide, a few waves lapping at the shore, each wave a little higher than the one before, but compounding. They are coming

in pretty fast, at the speed of the hurricane’s northward movement, in this case, 15 mph. There may not be any white water visible, but conditions can be comparable to a Class IV rapids, barely navigable. Only this is not a current you can outrun. The constancy of the momentum and the sheer weight of the churning water literally beats up buildings inside and out. No house is surge-proof. It may be hurricane-proof, but not surge-proof. Surge is relentless. It takes no prisoners. By the time it comes, it is too late to call 911. Nobody can reach you.

Such was the case on September 8, 1900 when the most deadly hurricane to strike the United States made landfall in Galveston, Texas. Its storm surge caught residents by surprise. 3,000 homes were swept away. 6,000 people were killed in a few hours. The death toll eventually rose to 8,000. Where 20,000 people had lived on September 8th there was not a house standing on September 9th. Looters were shot by vigilantes and mass cremations of unknown storm victims took place to avoid decomposition of bodies where they lay.

What made Katrina’s surge so powerful? The physics of waves and currents are far too complex for me to grasp, but I will try to simplify the process as I understand it. A column of water rotating around Katrina’s eyewall, where winds are highest, intensified as the storm grew more powerful. These currents are unseen in deep water because their energy can disperse into the depths of the Gulf. 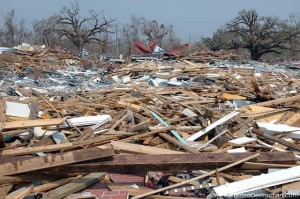 Once Katrina made her move across the continental shelf, this churning water had no place to go except over the land. Katrina’s storm surge developed its power when she was a Category 5 storm out in the Gulf of Mexico. Even though she arrived on land as a Category 3 hurricane, in terms of storm surge she is considered a 500-year storm.

Information about Katrina and the Mississippi coast come from Margie Kieper’s series, Katrina Storm Surge published on the Weather Underground web site and from accounts in Wikipedia, NOAA and the news media. Most photos come from FEMA and NOAA archives.