I know it’s January. No, not just because I’m atoning for holiday indulgences.

Lots of clues. Cold weather, maybe. The sun, yes, the sun. It’s so low in the sky its rays at noon reach far into my paneled sitting room, flooding it with cool gold. Spectacular sunsets, too, splashing sky and sound with my favorite Crayola colors. Dark starry nights with Betelgeuse winking at me. Such bright shadows from a full moon I can take kitchen scraps to the compost pile late at night without fear of bumping, tripping or slipping, though muffled rustles or thumps on the way still startle me. 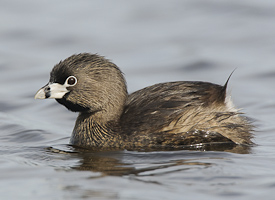 The casual stripe on his bill give pied-bills their name, but they only wear it in summer. Photo by Gerrit Vyn, Cornell Lab of Ornithology

I take all these signs for granted until one day I spy The Visitor, and I say, yes, this is January, and I smile with delight because I know he, or she, has not forgotten us. He, or she, has been spending a week or so with us every January for, oh, maybe a decade.

This meal will be a big one for the pied-bill. Note the white rump. Internet photo.

I’m so self-centered. Of course, these visits are not to us in particular. He, or she, happens to like our boat slip. It’s a nice, protected spot for loafing before going on, and its jumble of submerged logs makes for good fishing. In spite of myself, I imagine that she, or he, is tipping its hat (or should I say tail tufts) to us before going on to other adventures. Perhaps there would be stories each January if we could hear them. But our visitor is silent. 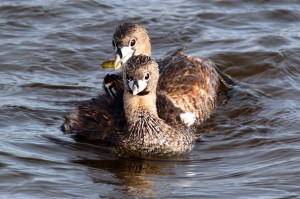 All in the family. Male feeding young as they sit on the female's back. Photo by Gregory Peterson, National Geographic 2011 Contest

Our visitor, as you have surmised by now, is a water bird. At first glance you might mistake him for a duck, but he is not. He is a pied-billed grebe, born of ancient lineage, distant relative of the flamingo. The difference is the flamingo is the archetype runway model, flashy, long slender legs stepping with precision, long neck gracefully arched. Our pied-bill is small and chunky, dun-colored, with stubby legs set so far back on his body he can hardly walk. (Don’t ask. It’s a molecular form and function thing.) Sometimes he sits so low in the water he looks like he should lose a few pounds. But he does have a cute white rump. All in all, a comfortable-looking bird I can relate to.

Flashy chicks emerge after 27 days in eggs laid in a floating nest. Photo by Joe Kegley.

And that’s how I recognize our visitor: low in the water, not flashy, small and lonely and silent, always too far away to pick out details. If I reach for my spyglass, I fear I will miss a dive, so I don’t turn away. Besides, I was taught that it is impolite to spy on visitors.

I hold my breath each time he dives; he’s down under for such a long time. I try to guess where he will surface, but he surprises me too often to make predictions. Does he know his bearings underwater, or does he surprise himself, too?

While they are young the chicks get a ride on Mom's back. Photo by Jan Scoff

Probably not. Diving is his life. His lobed toes make wonderful propellors when he swims for his dinner of fish, frogs or crayfish. Crayfish! Our very own crayfish? Surely he wouldn’t be so impolite as to pop one of our neighbors. Would he?

I would like to see him sink out of sight like a lead weight some time. It’s his way of escaping predators, but nothing seems to alarm him in our waters. Grebes manage this maneuver by quick-release of air trapped in thick feathers. Once under, they can swim into hiding to wait out danger. Maybe that’s why they are nick-named Water Witch and Hell Diver.

If our pied-bill is solo and silent in winter, he or she is busy and noisy in summer. Photo by Ed Bustya.

I will probably have to wait until next year. Our little grebe will be off in a week or so. Moving on toward breeding grounds? Or simply loafing elsewhere? So many questions. How old is our little grebe? Could he be a decade old? Am I seeing the same grebe each year? And is our grebe a “he,” or a “she?”

This I do know. I will be disappointed if I do not see our little grebe next January.