Posted on November 26, 2011 by aheronsgarden

There are three things I like about Candy. First, she’s an absolute whiz at trading food for food. For three weeks last summer she brought tons of her figs to every farmer’s market for miles around. Would you like some figs? she would ask. How much do they cost? No money. I would like to barter. I brought my own recycle bag and I’ll just keep putting veggies in it, and YOU tell me when we’re even. 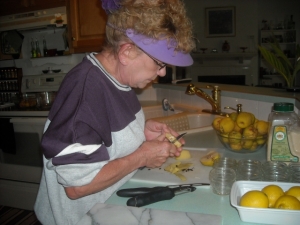 Candy in the Kitchen

Now, Candy’s figs are special. They come from a tree that looks like it should be growing next to Charlie’s Brown’s Pumpkin Patch on Halloween, and they are bigger and sweeter and juicier than anyone has ever seen. So Candy came home with bags of corn, tomatoes, cucumbers, onions, potatoes, beans, eggplant, peppers, watermelon, and anything else that looked good to her.

Last year, she said, was the best summer for free food. Candy did lots of canning, freezing, and dehydrating. 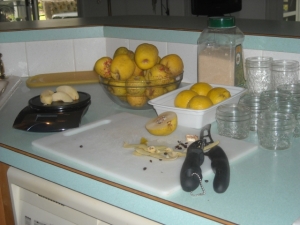 Tools and ingredients. Scale not needed for this jam

Which brings me to the second thing I like about Candy. She’s an absolute whiz at putting up preserves. Not just the usual strawberry and grape jams, but fun stuff like beautyberry jelly and watermelon pickles and quince jam.

Candy’s always up for a challenge. This year we had a bumper crop of quince fruit in our garden. When she told me, yes, she wanted them all, even the gnarly ping pong balls, I put on my brave face and dodged the thorns and twigs to gather all the mini-cannonballs and gnarly ping pong balls that hung from the bushes or sat on the ground. Didn’t matter where they were. They were all hard as rocks. 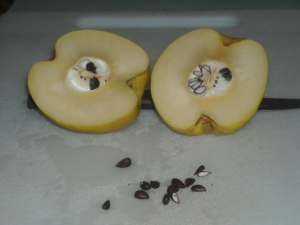 Cut in half, quince look like apples, fair enough, since they are relatives , both belong in the rose family

This is the second year Candy has made quince jam. Neither of us is quite sure when quince are ripe because they’re always hard and tart, except once a ping pong ball got wrinkled after sitting a while. But it was still a rock.

Last year our crop was meager, so Candy had to add some wild pears, or maybe apples, to the quince fruit to get just one batch. We never did figure out quite which they were. They came from a tree by the side of the road that drops unidentifiable but tasty fruit every fall.

But that one batch was delicious, golden yellow with small pieces of quince with a hint of apple, or maybe pear. One afternoon a group of us had a good time tasting quince jam with crackers and tea. Cream cheese would have been nice, too.

Candy uses a Sure Jell recipe she found on the Internet.

The recipe calls for 4 cups of prepared fruit, 2 cups of water, ¼ cup of fresh lemon juice, 1 box of Sure Jell pectin, ½ teaspoon butter or margarine, and 51/2 cups of sugar.

She peels and pits the fruit, then finely chops it with a small chopper she’s had for years. She combines the ingredients except for the sugar and brings the mixture to a rolling boil. Stirring constantly, she adds the sugar, brings it back to a boil for a minute, skims any foam and ladles the jam into an assortment of canning jars.

The color of the jam is a clear, pale yellow when white sugar is used. Organic sugar gives the jam a warm honey color. 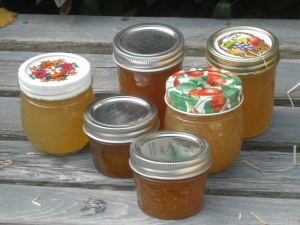 This year Candy made 3 batches. She eked 10 cups of chopped fruit out of the mini-cannonballs and gnarly ping pong balls, enough to make 2 batches, with two cups left over for another half batch. Two large organic pears added the two cups she needed to complete the third batch.

Tasty as it is, all this jam doesn’t get eaten overnight, so some of it goes into the freezer. Freezing the jam helps preserve its color. Kept at room 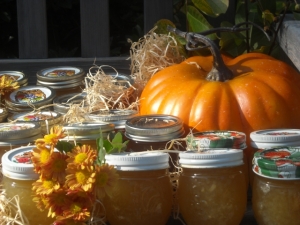 temperature it darkens over time.

Making quince jam is not for the faint of heart, Candy says. Peeling and chopping the hard fruit take time, but it’s a labor of love and good eating from the garden.

*Christine is a Master Herbalist and CFO (Chief Farming Officer) of Sprawling Oaks Farm, an organic farm in Arcadia, Florida. She raises goats, makes soap and cheese and is active in promoting organic farming. Look up her farm on the Internet or read her blog: http://veggiechronicles.wordpress.com

This entry was posted in Jelly from Fruit and tagged bartering for food, flowering quince, organic sugar, quince jam, sure jell. Bookmark the permalink.