Love Is in the Air

Posted on February 28, 2012 by aheronsgarden

It’s the end of February, and the Spring 2012 version of Fantasia is just beginning. The next few weeks are the noisiest, happiest time of year in our garden. Buds are greening. Days are brightening. Holly berries, last in the berry parade, overripe crabapples, and pine cones and sweetgum balls still cling to trees. Crumpled leaf litter provides minute meals of seeds that only a scavenging bird can find. 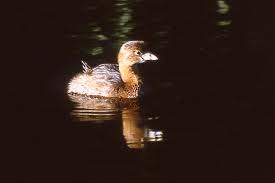 This stunning photo captures the qualities of the pied-bill grebe: chicken-like beak with stripe, diminutive tail and chunky body.

Choices that remain after winter pickins’ may not be everybody’s favorites, but there is still enough around to fill bellies and then some, with a little dessert from our nonstop birdseed and suet-cake buffet.

Still weeks away is the serious work of feeding babes that seem to be all beak and squawk, then chasing the tipsy toddlers as they test their wings. Time now for dancing and playing and flirting to rhythms we can only guess at. Time enough later to pay the fiddler.

To our surprise, water birds, not woodland birds are playing out the first scenes in these springtime duets. We thought our regular January visitor, the pied-billed grebe had already departed for points north. (See The Visitor.) Not so. For the first time ever, there is a layover into February, and for the first time ever there are not one, but two grebes. A pair? Grebes are normally loners except during mating, so this seems a reasonable assumption.

Their markings are practically identical, except for the fluff below their tails: one is ultra-white, the other is the color of thick cream. So, as is usual with pied-billed grebes, there is no easy way to tell male from female. 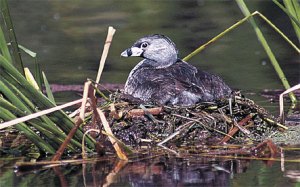 Nests are anchored to mats of floating vegetation that in time stains the pale eggs and camouflages them. Photo by Anthony Mercieca, Root Resources

They keep a certain distance, too. No tandem swimming that could announce a partnership, a ritual we see each spring as Canada geese explore our slip before rejecting the digs. (Who gets final say, I wonder.) Swimming and diving were strictly solo affairs for these two. Maybe they were simply acquaintances (Hi. Don’t I remember you from the pond last summer?), each with a free spirit.

Grebes don’t have an elaborate courtship. A little fluffing up and some maniacal laughing duets.

No fluffing, no duets here. This was casual choreography suited more to a comfortable, old-shoe pair. They preened. They loafed. They tucked their beaks into their backs for quick dozes. There seemed to be no self-appointed sentry. Neither seemed concerned about predators. Grebes count on diving in an eye-blink or sinking like lead weights to escape danger.

Our grebes became such a fixture, fishing, preening, loafing, we hoped they might consider nesting here, though we knew this would not work. There is no shortage of floating vegetation in our quiet canals to use for nesting, but our summertime salinity levels are too high for freshwater birds. 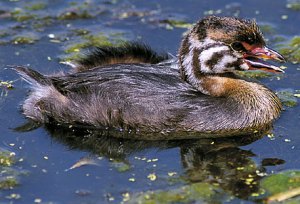 In a few days they were gone, and, in our loneliness (Yes, we missed seeing that duo’s arrival around lunch time each day.), we imagined their joy at returning to favorite ponds, imagined their loony calling, imagined piggy-back rides they’d give their youngsters.

A pair of hooded mergansers temporarily distracted us. It had been eight years since their last visit. That winter of 1994 had been a cold one. The slip had iced over and much of the canal was frozen, too. Those mergansers, three females, three males, swam and dove in the open pools that remained. 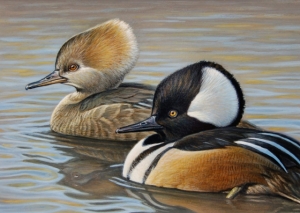 There’s no question about gender with hooded mergansers. The white crest on the male is flashy and he displays it proudly when he is courting. The female’s crest is brownish, yet when a western sun reflects off the feathers, they glow like burnished copper. Does the male consider this when he pursues a mate?

They are only stopping here to rest and refuel before they fly north to nest. Somehow the word has gotten out about the terrific fishing in our slip. Log jams left by Hurricane Isabel and other storms have become home to schools of small fish, and some not so small. The great blue heron knows this, as do our local fishermen, who never give up hope, and, of course, our grebes.

We watch these transients as they fish for dinner. Their success rate is impressive. Once caught, it’s probably a rare fish that gets away. If the fish has not been impaled on the hooked nail at the tip of the beak, he will become prisoner to serrations along the edge. As soon as the merganser surfaces, the wriggling fish is deftly maneuvered into position to slide down the gullet with a gulp.

Is her beautiful crest a come-on to the male? Photo taken at the Bronx Zoo by Laura Meyers

When the mergansers left for their important business up north, we thought the story was over until one sharp-sunned windy day a single pied-billed grebe showed up in the canal. A determined north wind was pushing water hard to the south, impatient to empty the canal. The little grebe bucked wind and water for most of the day, rarely budging from his self-appointed outpost.

Why in the world didn’t he look for shelter in the lee? Where was his partner? As we watched the bobbing and bouncing, we began to understand. He was having time of his life. We could almost hear our little grebe laughing with delight.

A day or so later both grebes were back loafing. Is there no end to this off-again on-again courtship? you ask. Patience. . . We’ve had a few warm days, winds are coming from the south, and turtles are sunning themselves for the first time in months. Maybe the same signals that bring the turtles out of their muddy winter havens prompt the grebes to take off, for they are truly gone now.

In the distance we hear, briefly, the haunting call of a loon, barely audible, tentative. Practicing, perhaps? Checking out a possible mate before heading north? The quiet subsong brings back memories of camping and canoeing in Maine and Minnesota.

We understand so little. Every spring celebration brings more clues and more puzzles. We can only watch and guess and imagine what is unknowable. Perhaps that is as it should be. It prevents us from prying and it helps to keep us humble.