My Garden is a Madhouse

And I am the Mad Keeper of the Madness

I think it is safe to say the inmates have escaped and are now at large and in charge.

Weather created this garden asylum. You have to believe me. This was none of my doing, I can assure you. (Except maybe setting plants a tad too close, but that’s because they looked lost in a saner garden. . .who could guess they would take over like an army.)

All these plants had been pruned before spring. I know that because I made a garden resolution to keep the pruners busy this year

During two weeks in May and June we had ten inches of rain. A couple of days later I stepped outside and, aha, I surprised the inmates in their crack-brained insanity. 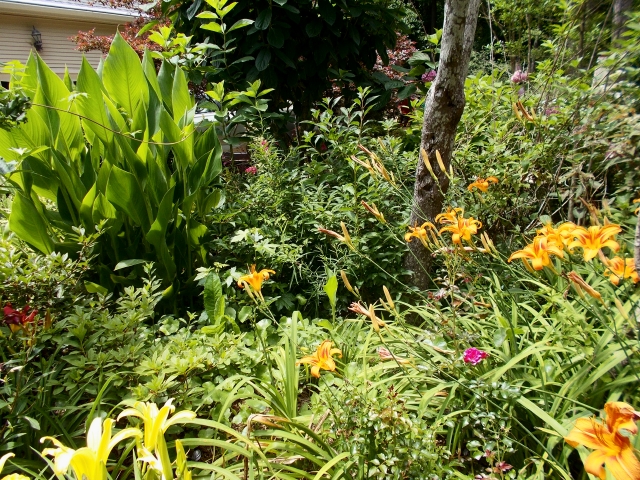 It was years before we were able to grow much in the soggy soil in this bed, though three hydrangeas grew big enough to fill it — until they wilted so after the crabapple that gave them shade was removed, so they had to go

Oh, the gleeful high fives that never came down. The poking and the pushing and the jockeying for prime positions, then the lolling when they got drunk on all those nutrients in the compost we so lovingly applied. 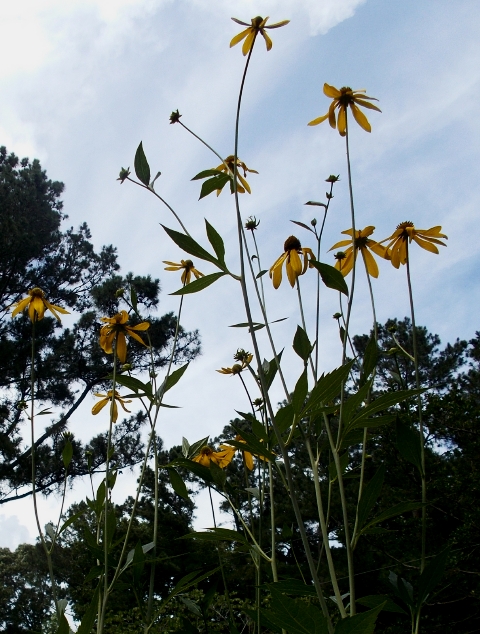 I freely admit that I am grinning. Many of these plants have taken years to look happy.

No doubt the spring that dripped blossoms (my last garden post), the spring we assumed would drown the garden but instead managed to crown it with blooms was an early perpetrator.

Another major battle in the bed, this between distilium, a rangy evergreen that should stand alone to be appreciated, and dwarf burford holly. excised twice but can’t take a hint. Weigela ‘Wine and Roses’ and clethra ‘Hummingbird complete the picture. All pruned heavily in spring. I should take pictures of the truckloads of prunings we gather up in late winter/spring

But here’s the rub. Late April and most of May we hardly saw a drop of  rain with blasts of hot sun that shriveled tender new growth. A few plants even got sunstroke and died. We had to dicker with sprinklers and coddle the water hogs.

This hydrangea looks lovely after buckets of water and 10 inches of rain but it is perhaps the neediest plant in the garden. Maybe I should give it some slack. Greedy dwarf burford holly and Leonard Messel magnolia are neighbors. When it becomes a rag doll in August and I can’t stand the way it looks, I prune it hard, which makes it come back bigger which sets up the watering cycle next year

(Sprinkling is my least favorite garden task, way below weeding briar and thistle, because I have to be alert at all times to avoid getting soaked. At least the birds get to preen and play.)

A lovely Japanese iris, the queen trying to manage her unruly subjects. Usually they stay fairly vertical until July when I cut them back for a second surge of growth but no flowers

After a month or so of these dry sunny days, there was talk of drought.

Drought? Drought? That’s what casual friends in Montana have every summer. They tell about watching the sky and seeing rain evaporate before it hits the ground. And still they try. And still they are optimistic when that mail order stuff doesn’t grow properly, or doesn’t grow at all. I would take up beading.

Trumpet creeper ‘Orange UFO’ (If Beatles can do Yellow Submarine…)Doesn’t need rain, will grow to great heights, birds love to nest in its tangle,  and my, how it spreads through a garden 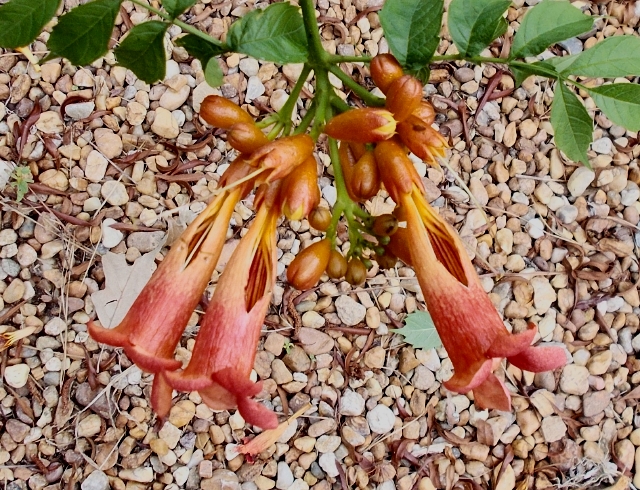 Note the slits in the blossoms. Hummingbirds love the nectar, which is at the base of the bloom and almost inaccessible. I’ve read that birds tear the slits to find the nectar. Not sure. Stay tuned

Drought is what’s going on out west for years now, isn’t it? Drought caused the Dust Bowl, didn’t it?’ Drought finished off civilizations. So quitchyerbellyachin’  over a month or so without rain, I tell myself as I finesse the aim of a sprinkler one more time and a truant breeze splats the spray in my face. 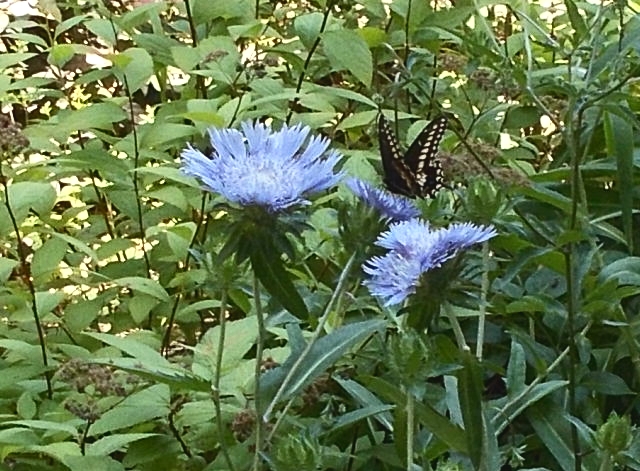 Stokes aster, a perennial that grows in sun or shade, is a reasonably drought tolerant, native. Here, a Palomedes Swallowtail sips nectar, having grown up on the swamp redbay that grows wild in our garden

It took me a while living in east-coast crop country to understand that drought is relative. When farmers look to the sky, what they want to know is if they will have a crop this year to pay the bills and cover the loans. So drought is measured here in inches below normal, not decades dry as hard tack in a mess kit.

A signpost commemorating Hurricane Isabel. Note the small, opportunistic wisteria growing up the post. Susan and I dug some up from a vacant lot years ago (witnessed by a friend driving by, darn) and it was ten years before it climbed a tree. This year it is surprising us as it hops around the garden. The ground cover is a tame rudbeckia laciniata

Drought is not only relative, it’s spotty here. Last I looked, the climate map said our area was dry. Our garden tells us we are not. Are we under unique and repeating bands of rainstorms? 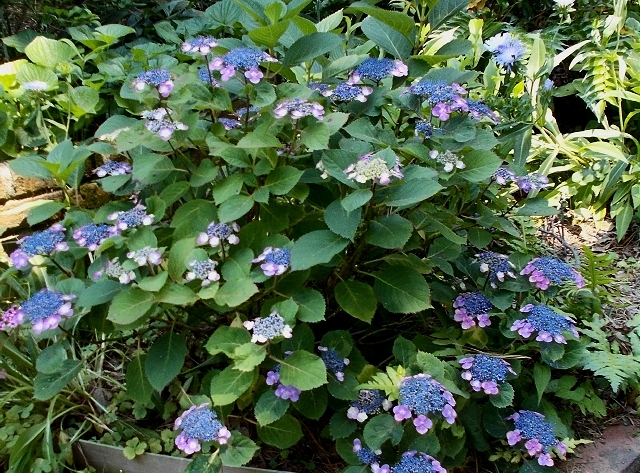 Tuff Stuff hydrangea, fast grower, hardy hardy hardy, this plant from a cutting two years ago. As of this writing, the blooms have turned a rich purple with rosy, sterile-flower petals

It goes the other way, too. A decade or more ago, the rest of the area was well watered, but we were watching the sky and waiting for rain. The squalls came but they stopped less than a mile from us.

That pattern lasted a couple of years. 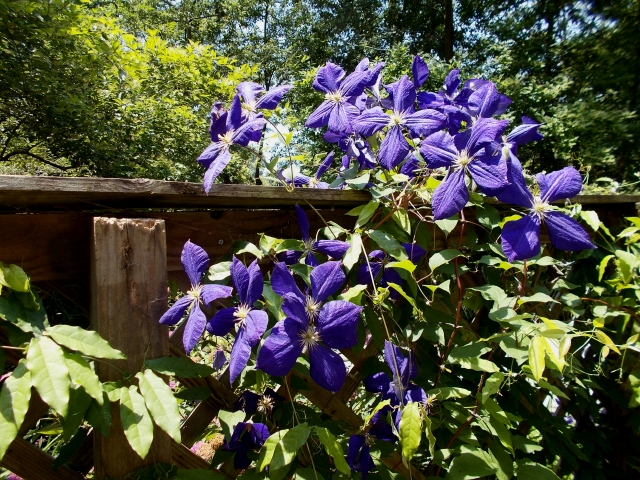 Clematis jackmanii, such a reliable old friend, has to compete with aggressive cross vine, sweet autumn clematis and trumpet vine and still she comes through and improves with age

Oh, how the ground cracked and the plants struggled. I couldn’t grow a lenten rose or a decent daylily. Established shrubs held on but they were not full and happy. We had forgotten what rainy days and mud puddles looked like.

Proof positive that we pruned this year, this double reeves spirea was taken down by half. For a spring picture see the full blown white flowers in my spring post . 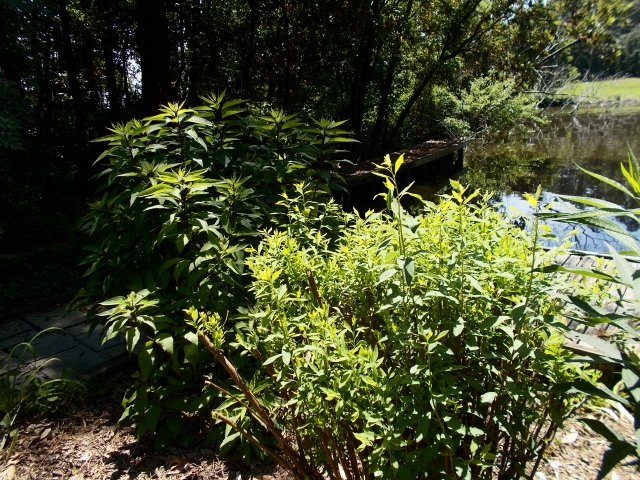 Same plant a month later with Joe Pye Weed native behind it. If you don’t want a tall Joe Pye, you can cut it back a couple of times for a nicely shaped shrubby plant that will bloom well. To the right,  out of range, is New York ironweed, thrilled to be back in the limelight after being sidelined by the spirea, racing with Joe Pye to see who can hit the sky first

So I am not complaining about that month of dry weather. I know what it is like to watch the sky — and I am not growing food needed for the table or crops to pay the rent.

And I know that next year I may be watching the sky. I wish I could share this year’s gifts, but it doesn’t work that way.

An unknown species of local swamp dogwood, here 20 feet tall and wide, barely three feet in the wild. But it doesn’t berry the way it should.It and the hosta below are saving a sasanqua camellia in a wet bed

Not as flashy as some, but oh such a steady grower, Antioch hosta and the dogwood above are drinking up the puddles in the bed. Without their busy roots the camellia would be swamped

The sun is out but the air is dripping on me. This will be a good time to sneak inside and reread that lovely sixty-year-old book, The Plant Sitter, about a little boy who was babysitting plants that got out of hand. Maybe I will get some plant tips (no pun intended). 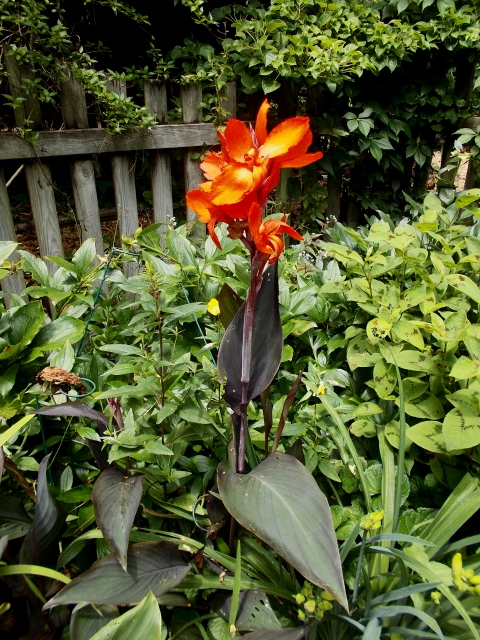 The happiest canna. I dug a piece of it a couple of years ago from someone’s pile of garden trash (with permission) and it has taken hold, with no bug bites this year — yet

Another five inches fell last night and this morning is threatening. Can I justify leaving the inmates to their madcap frolics and delay the clipping and staking to bring them to order?

Planted ten years ago, this hydrangea is finally exploding this year

You bet I can! 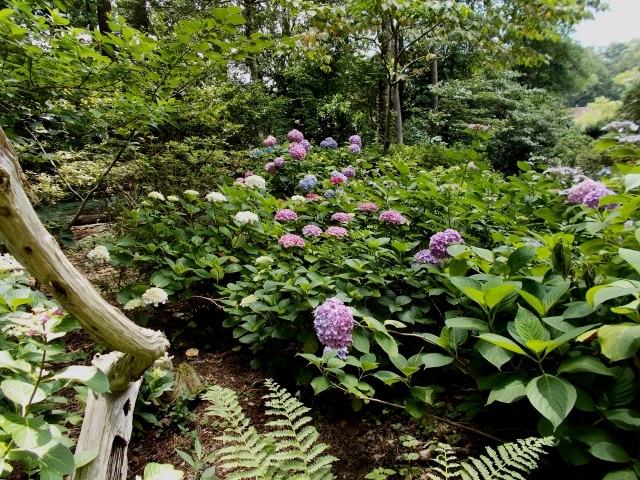 Old hydrangeas by the edge of the woods. Between compost and mulch which tend to be acid, and our naturally neutral soil, their colors are variable. They change as the season progresses and each year is a surprise

And finally, the lovely crepe-papery pomegranate bloom, from a cutting several years ago  recently planted. The old flowering pomegranate is gone now; I can’t remember why it left us, but I’m glad it gave us heirs. It’s a precarious life in this garden, and I must confess I would miss the merry madcaps of the carousers.

Punicum granatum ‘Plena’ does not fruit

5 Responses to My Garden is a Madhouse