You Can Never Turn Your Back on a Garden

Posted on November 14, 2018 by aheronsgarden

Or, Hope Springs Eternal under a Gardener’s Spade

(Dear Reader – What I am about to tell you is the plain unvarnished sober truth. I do solemnly swear this on the Good Garden Book of all time. We confess it, yes we do: We turned our backs on the garden this summer.

You are probably assuming that summertime was couch-and-truffle time for us. Not true. We were out there with Ranger, hauling and shoveling, building beds and laying paths – in the days of heat and humidity. (And then we headed for the couch.) 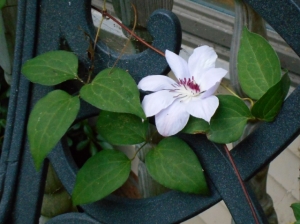 Clematis ‘Henryi’, not content with a railing, covets the chair, but we’ll let him be

Here’s the irony. We were out and about almost every day and we never noticed what was going on right under our noses. Plants are tricky.

Photos inserted in the post are prima facie evidence (fancy terms I learned from Perry Mason) of the crime wave. Some of them are depressing. So much so, I almost added a bottle of wine to the truffle-binge. In contrast, photos in the slide show were taken during spring and summer, when life was fresh and good and abloom. Here is our story.)

And I’m not talking about the weeds.

They are notorious gamblers, too. 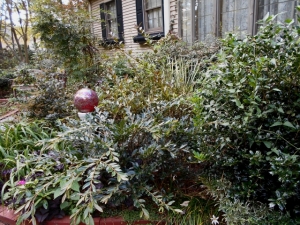 Front bed behaved in spring, unruly today, daring me to cut them back

Here’s the third. I celebrated, too. No dragging hoses, no water bills. (Little did I understand that I was on a very short winning streak.)

Even the reliably neat growers rioted like demented lunatics, breaking out, shoving neighbors, smothering them. No polite, “May I have a little of your space, please?” More like, “I’m takin’ your territory and don’t try to stop me.” 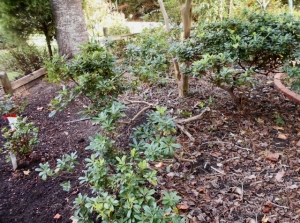 Even scrawny pittosporum began to invade. See next photo

I had an epiphany. Those lovely green things that can give so much pleasure are true gamblers, grabbing tight to the coattails of a winning rainy streak.

Then they count on me to bail them out by anteing up the hoses when they hit a losing streak.

Oh, they are good. Smooth operators, they are. Pictures of innocence in the spring. Enthusiastically budding out under warm rains and balmy skies. So pretty and prim. 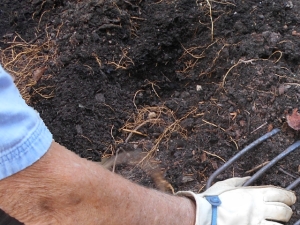 When we roughed up the soil for a replacement planting of azaleas, we found a solid network of pittosporum roots widespread in only a few months

Innocently I rejoiced in their sweet new growth, and, trustingly, I turned my back to go on to other chores. That’s when things got out of hand.

Instead of investing some of the excess in the future, like the ads on television say to do, they were squandering their good fortune.

Chugging that rain just as soon as it fell, gambling like big shots, sporting big leaves with a flourish and flaunting pole-vault growth — in very poor, nouveau-riche taste, I might add.

Sweet autumn clematis (that’s the old common name) (the other names, because people discovered it wasn’t so sweet: Clematis paniculata, Clematis ternifolia) is one of the worst. It’s the biggest and sneakiest guerilla in the garden, and that’s probably why it has been given two scientific names and not one. 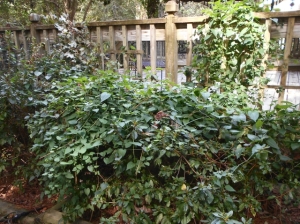 Third growth of the season after two others whacked down. There is an azalea under there

The books say to cut it down at the end of the season for best growth next spring.

I am happy to announce that cutting it down really works. Our hundred and two small villains have grown into an army of thugs.

The books also say to fertilize the plants. Fertilize them! They’re already on their way to becoming kissin’ cuzins with kudzu, lounging over the garden like decadent divas.

The books also say they have lovely seed heads that glisten in the sun. I have to agree. The books do not mention that every seed head creates a new plant, and some, I suspect, have twins, or even triplets.

If you are a vigilant gardener, you can pluck the babes before they fly, but I am not a vigilant gardener. I tend to procrastinate until somehow a horde has grown roots clear down to Azerbejian, or some other unspellable, unpronounceable territory that you can’t find on a map. 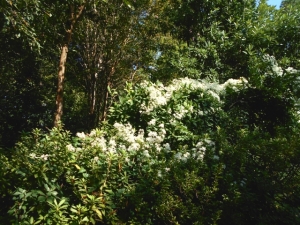 Here clematis is climbing over Ilex verticillata, which is supposed to be berrying. Bob was cutting it back regularly

Now, don’t get me wrong, I love Sweetie (that’s my old pet name for it). (Sweetie! Pet name! Is she nuts? First she calls it a thug and a villain, now we hear it’s a Sweetie.)

Never you mind. I love it so much I have sold it at our plant sales. (Now I develop an extreme case of myopia when I see once enthusiastic buyers, formerly good friends.)

But I just can’t resist those cascades of dainty, sweet smelling flowers falling all over shrubs in August and September.

It all started innocently enough when the first Sweetie anchored itself near a quince that defoliated in August. (Don’t ask why the defoliation, just accept.)

The quince happened to grow (here I must be honest and take responsibility for this idiotic siting) right next to a path and the driveway. Great possibilities here for healthy quince thorns to scratch a car or stab unsuspecting strollers.

But I was rhapsodizing about great garden design, not practicalities. Everyone coming up the path to our house would have to pass this quince and they would all exclaim about its lovely spring blooms, if, of course, they weren’t stabbed first. 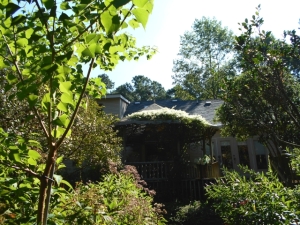 Here, clematis has made it to the roof of the gazebo

It didn’t quite work that way. Everyone seemed to visit in August. People would ask, why don’t you get rid of that dead plant with the awful spines.

And I would have to go through a long explanation of how it blooms like a champ from January to April and it is probably taking a little rest now, though I don’t know why, and don’t worry, it’ll green up next year.

(At least this quince is not one of those guerilla-gamblers.)

Then people would give me that look like I was demented, but they would never let on.

So to stop people asking me why I kept dead plants hanging around the garden, I let Sweetie smother the quince, and then people could admire cascades of blossoms instead of fretting over a dead plant. Though by this time knowledgeable visitors had learned to take a detour and didn’t notice the show. 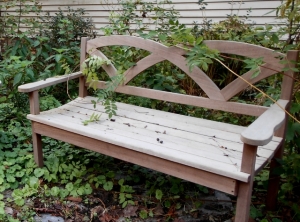 Even the native wisteria ‘Amethyst Falls’, supposedly more restrained than the non-native, began to drape itself on the bench

But Sweetie betrayed me. She never reined in her toddlers. Just let them romp over the entire garden, leaving me to clean up the mess, and that is why I have a love-hate relationship with Sweetie.

To get back to the other gamblers, along about August, we had a dry, hot spell, and I noticed the plants were not as happy as when they were celebrating steady wins in spring.

They were struggling to keep their leaves above water, in a manner of speaking, and they had that look of wanting a bailout. I ignored them. I told them not to look at me like that and in fact I cut the cheekiest beggars back hard so I wouldn’t be tempted 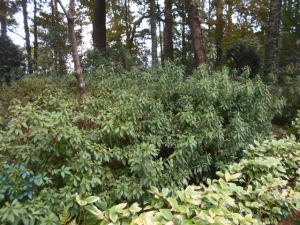 The first year ever our George Tabor azaleas wilted. Maybe because they muscled their way out of their space?

They won’t try to take advantage of me again, I smirked.

Then, in September and October, despite hurricanes threatening, a bigtime dry spell hit.

You should have seen their ploys to get me off the couch and make them flush again.

The droops, the wilts, the crumpled (formerly big) leaves, the sagging stilt-stems, the browned flowers and fern fronds.

They knew all the tricks. I’m proud to say I didn’t give them a tumble. I was not going to be an enabler. 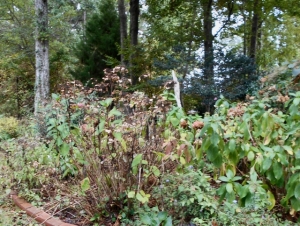 Shame on this ‘Lady in Red’ hydrangea. Usually a showpiece all summer, she  caroused too much like a lady in red this spring and look where she is today

You were high rollers in spring, I yelled. You gambled on the good times lasting forever.

You figured your winning streak would never end. You should have thought of summer and saved something for a rainy day. (Uh. . . or maybe that would be a sunny day.)

Don’t come crying to me now. I’m the one who has to bring some order to this garden.

And just be glad I’m only whacking at you.

Ditto for you, green-eyed coneflower. You’ll be cut down soon, you’ll see

Any more of this droopy business and I’ll rip you out and throw you onto Ranger’s backside and you’ll be crushed in the dump.

Well. . .I probably wouldn’t do all that.

And come to think of it, maybe I shouldn’t be too hard on the gamblers.

We gardeners are gamblers, too. I ante up for plants all the time and count on winning. And then. .

Or I put a plant in a spot that I know is not quite right for it and expect it to live. And then . . . 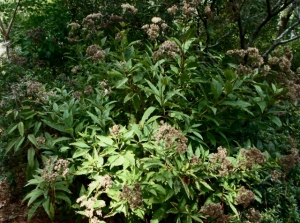 Joepyeweed always grows out of bounds, but if I cut it back once or twice  in early summer it behaves. Note height difference between one shearing and two shearings.

Like true gamblers, we gardeners rarely announce our losses. Whatever stays green gets bragged about.

Whatever doesn’t is a best-kept secret unless we are prodded to tell the truth so we get to heaven.

We’re a little like the fisherman who can’t quite get measurements straight.

Do you suppose the plants have reformed after this year? Nah. 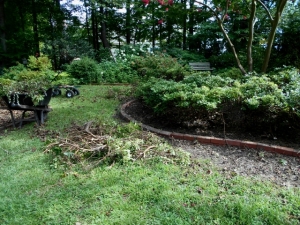 And always there is the reaping of the mess

With this pleasant fall weather, they are perking up, looking mighty pleased.

Now it’s time to rest up for the gambling spree next spring.

Do you suppose we gardeners will ever learn? Nah.

PS  Even though I YELL at plants, I am NOT demented. Here are pictures of some plants I did not have to scold.