The Sinking of the Albemarle and The Rising of the Sea

Posted on October 1, 2018 by aheronsgarden

One moonless night in 1864 a Union patrol boat, silent, brazen, dared to approach a colossal armored vessel that had been cruising Albemarle Sound and disabling Union ships with outstanding success.

This mighty steel-clad Confederate vessel, or ram, was the CSS Albemarle. A torpedo launched from the Union’s small craft left a hole in its steel hull big enough to drive a wagon through. The Albemarle sank almost immediately.

The CSS Albemarle in its prime

That isolated event was the only sinking of the Albemarle we were aware of for a long time. Then we learned that another wider, greater sinking is taking place in the entire Albemarle area and to the north and south of us. And we believe it now.

When people first told us about an island called Batts Grave off the end of our canal, and the hermit who had once lived there, we thought it made a good story. We were pleased that the skittery pile of sand and clay was holding fast. It kept the Sound from barreling up our canal and gave a foothold to the bald cypresses that supported aeries for ospreys we loved to watch.

What made us sit up straight was the report that sea level was rising faster in Virginia and North Carolina than along the entire east coast. That’s against the laws of physics isn’t it?

Yes indeed, but in places where land is sinking, sea level will appear to rise more quickly, leaving telltale marks on piers and poles, as we shall see. The area in question includes, roughly, a chunk of land from Wilmington to Hampton Roads, Virginia.

We looked at what was left of Batts Grave with new interest. How big was the island when Nathaniel Batts lived there in the 1790s?

Juicy Aside: Batts may have been a recluse before he died, but in his younger days as fur trader, land owner, pardoned murderer, serial debtor, he was a virtuoso wheeler-dealer. His savvy wife (or her family) had him sign a prenuptial agreement promising not to use her fortune to satisfy his debts.

The North Carolina Gazetteer says that in 1749 the island that would later be called Batts Grave “was 40 acres in area and had houses and orchards on it.” By the time Batts purchased it as part of a larger parcel and lived there in the 1790’s it was reduced to 27 acres, still a comfortable plot. It remained stable until about 1913. By mid-twentieth century it was reduced to a fly-speck on a map. Today it is gone, except for craggy cypress trees.

Were wind and water culprits in obliterating the island? Or was it the sinking of the Albemarle? Two pictures we took of our garden near the dock accidentally gave us some clues. You be the judge.

The first picture was taken about 25 years ago, when Batts Island was still a respectable speck in the Sound. Notice that the water level is below both the canoe platform and the beam below it, and the bulkhead above is generally dry.

Photo of our garden about 20-25 years ago, pre-Isabel

Now look at the next picture, taken a couple of years ago. Quite a difference in water level, and there are water stains high on the bulkhead walls.

Wind tides in Albemarle Sound will send water sloshing north and south across the Sound from shore to shore, depending on wind direction. One winter, when a north wind blew for weeks, our boat slip was entirely drained, except for remnants of dirty ice topping mud, an extreme event.

In spring and summer, winds from the south might pile water up on the north shore. These winds are usually gentle, so there is no dramatic uptick. We don’t offer these pictures, both taken in spring, as hard cold evidence, but given the water stains in the second photo, we feel they show a pretty reliable record of a sinking land and a rising sea.

Why are we sinking?

First Reason:  Glaciers! Hundreds of feet thick and weighing tons, like blunderbusses they bore down on the land 20,000 years ago. In response, land to the south bulged upward. Picture a seesaw. While Icy Land in the northern seat comes down, Green Land (us) in the southern seat is forced to rise up.

The opposite is happening now. It began when glaciers receded about 18,00 years ago. Land released from the weight of the glacier is slowly rising.  Unglaciated land to the south (us) will subside. The see saw is going in the opposite direction and has been for the past 2 millennia.

Second Reason:  People! People take more water out of aquifers than rainfall puts back. Too many people, too much industry, too much pavement, too much run-off prevent rainwater from finding its way back to aquifers. As an aquifer begins to shrink the level of the land shrinks.

It’s a little more complicated than that, but field studies over time in Franklin, Virginia, back this up.  (I do not know of any long-term studies done in North Carolina.) To add spice to the mix, as the land sinks, the water table rises.

Is it any wonder that our lawn becomes a rice paddy after too many hard rains? Or steps run with water and gather moss and mildew?

Or that the streets of Hampton Roads and New Bern and Wilmington and Elizabeth City frequently flood after what were formerly benign rainfalls? Do you see a trend?

Let’s add a hurricane like Florence to the mix. Here in  northeast North Carolina, Florence only grazed us, though parts of our property flooded and remained flooded for days after this mild (to us) storm, and one point is eroding badly. This, we have come to learn, is the new normal.

Let’s widen our perspective and look at New Bern and Wilmington and points inland that took direct hits from Florence and other storms. They are teetering on the front lines of rising sea level and severe weather.

Here’s the new normal for the eastern Carolina floodplain.

Fran in 1996 exceeded the 500-year-flood event in several areas.

Floyd in 1999, called the flood of the century, exceeded the 500-year-flood event.

Isabel in 2003 walloped us with her immense size and storm surges that caused widespread flooding.

Ditto for Florence in 2018. Some people were just recovering from Matthew when Florence wheeled in and upended their lives again.

Now let’s add a mix of hog farms and lagoons (spin for unlined pits of liquid manure) and poultry farms with their in-house wastes. 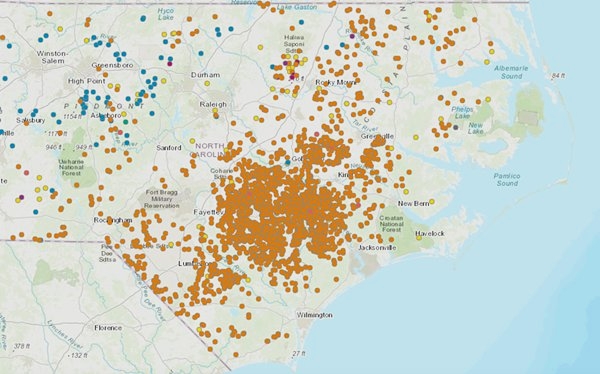 Graphic map of hog farms in eastern NC 2018 by NC Policy Watch. There are 9 million pigs in North Carolina, most of them on the coastal plain 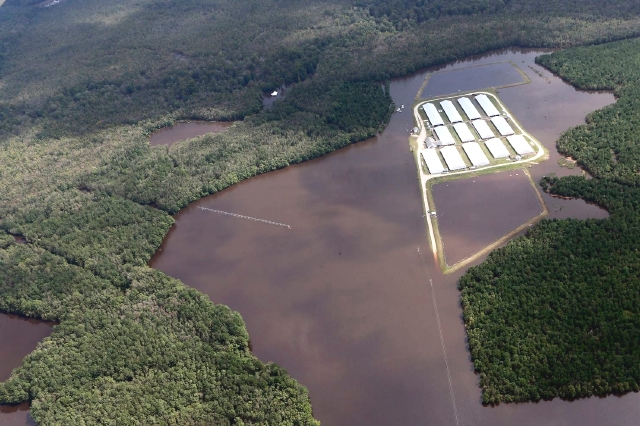 Imagine this witches’ brew poisoning your drinking water or washing into your home. 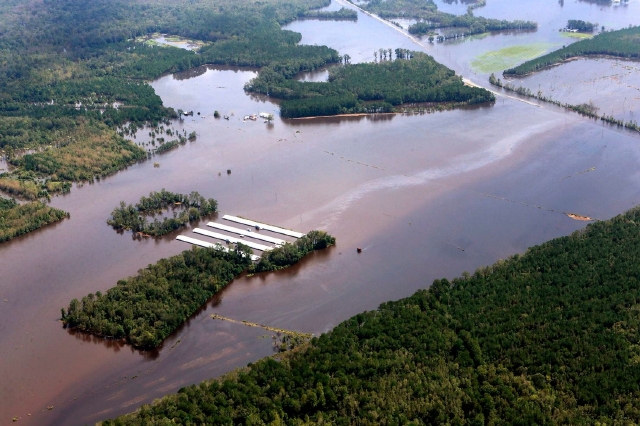 Rick Dove, a founder of Waterkeeper’s Alliance who viewed the recent flooding by helicopter, puts it most succinctly, “I saw Florence sending millions of gallons of animal poop flooding across North Carolina.” How soon will this happen again? 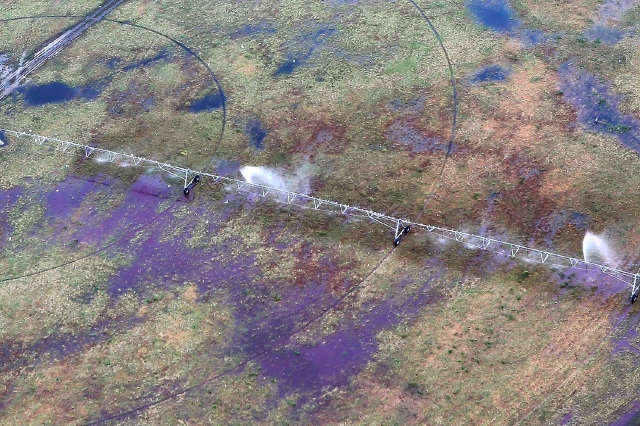 Hog Waste sprayed on fields after Florence. This is routine practice under normal circumstances, too.  Photo by Rick Dove

After the war, the CSS Albemarle was raised, repaired and condemned. In 1867 it was sold at public auction and scrapped for salvage.