Adventures Down the Rabbit Hole

It was a spectacular June affair. Monsanto was Matron of Honor for Roundup (Lizzie Borden of Weed-Killers), and Bayer was Best Man for Neonics (Godfather of Bug-Killers). The Department of Justice was Justice of the Peace.

Half the world — the European Union, Brazil, India, Canada and China — chorused a throaty Amen.

Megabanks and investment firms were lavish in their promises of legal and financial advice.

A honeybee was ring bearer and monarch butterflies hovered like cascading ribbons. 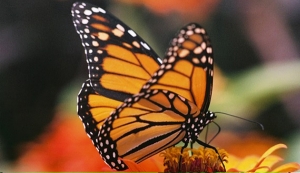 Banns were published and ended about two months after the union was announced.

There were over a million objections based on the duo’s close kinship, but Justice will give his blessing anyway.

In his exuberant toast, Best Man Bayer extolled the alliance of bug-killers and weed-killers to wipe out future world hunger.

The President sent his congratulations.

Meanwhile, in the (Monopoly) Board Room. . .

Earlier in the year – for the eighth time — Corporate Responsibility Magazine named Monsanto one of the 100 Best Corporate Citizens in 2018. Said Monsanto, “We are honored to receive this recognition, which acknowledges our commitment to be a sustainable and transparent company. . .” 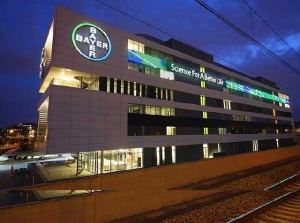 Bayer factory in Belgium. Slogan: Science for a Better Life

Buddy Bayer is not so impressed with Monsanto’s corporate do-goodism. Bayer sells a lot of neonics, $1.5 billion worth each year, and it has no problem committing $66 billion in cash to purchase Monsanto.

That does not mean Buddy Bayer wants to share billing with Monsanto. First item on the agenda: Ditch that Monsanto name and her unsavory reputation.

A century-old institution gone from the headlines, though we’ll still see the familiar products on the shelves.

Back to the hitch-up. There is a hitch. Those pesky anti-trust laws. If you can’t exactly follow the logic in the agreements, remember we are still down the rabbit hole. 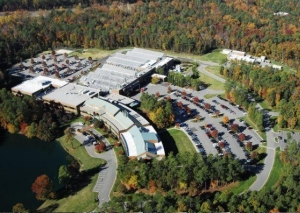 To snuff out any whiff of anti-trust smoke, Justice tells Bayer to sell off a 9-billion-dollar basket of goodies.

The goodies just happen to  go to BASF, the largest chemical company in the world, headquartered in Germany (as is Bayer), big in plastics, fossil fuel exploration, and insecticides, fungicides, and herbicides.

BASF has also partnered with Monsanto on biotechnology and has its own stock of GM seeds — potatos, soybeans, corn and canola — and is now poised to expand in this area. 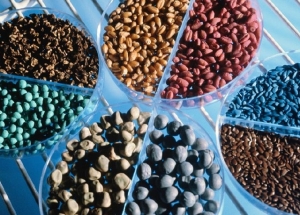 Bayer seed stock — giving it up

BASF gets Bayer’s seed stock, herbicides, and research centers, anything that might compete with Monsanto products. Even Bayer’s Bee Care Center goes to BASF.

It is a Monopoly Board trade made in heaven for the players, who earnestly insist it will preserve competition and protect farmers and consumers.

In case you haven’t been counting mergers these days, there’s Monsanto and Bayer, Dow and DuPont, and ChemChina and Syngenta. BASF stands alone. That means four Big Ag/Big Chem companies will produce two-thirds of the world’s patented seeds and two-thirds of all pesticides. 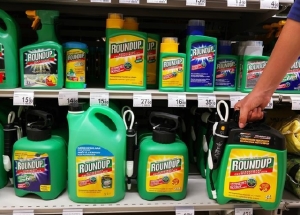 Monsanto’s flagship Roundup products will remain on the shelves

And, to whet your appetite for that next ear of corn on the cob. . .In the US alone, about 150 million acres of crops get an annual dose of neonics, and more than 300 million pounds of Roundup (glyphosate) are sprayed annually on farm fields.

Roundup is top dog in the world of herbicides.

In fact, a former executive of Dow who claims to “love Roundup” has been proposed for a top post in the USDA. He’s the third Dow alumnus appointed. . .

. . .And, Dow’s dangerous pesticide, chlorpyrifos, banned for home use and linked to Parkinson’s disease, lung cancer, and brain damage in children, will stay on the market, thanks to EPA’s back-pedaling. 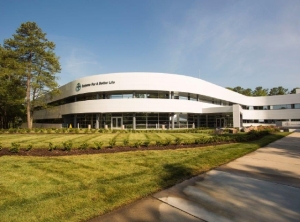 EPA originally planned a nationwide ban but pulled back. . .

Not to worry. Health and safety? Price-fixing? Loss of quality? These Big Four have a rosy outlook on doing good and earning fat profits. Or is it the other way round?

Or maybe the outlook will be less rosy for Bayer and Dow. On August 9th a federal court told EPA to ban all uses of chlorpyros within 60 days, instant blow to Dow’s bottom line.

Monsanto may be going but Bayer takes the hit, unless, legally, they can find a way to push the lawsuits aside

And, on August 10th, in a landmark case, a jury awarded $289 million to Dewayne Johnson, a school groundskeeper who claims Roundup caused his non-Hodgkins lymphoma.

Bayer intends to appeal, but it will have to pay out about $25 million a year in interest on damages during the appeal.

Across the country, thousands are lining up to sue, each case to be tried separately —  no class-action suits, which dilute the value of plaintiffs’ awards.

–2015 Geneva. The World Health Organization rocks Big Ag when it releases a report stating that glyphosate (Roundup) is “probably carcinogenic to humans.”

Bumblebee, an industrious solitary pollinator, on gooseneck loosestrife. Photo from The Conversation

–2016 California. Based on the WHO call, the state declares glyphosate a probable carcinogen.

–2018 California. A big win for Dewayne Johnson who sues Monsanto. (See above.) Jurors’ decisions are unanimous on all seventeen counts.

The “Monsanto Papers” (in-house records) reveal bullying and bribing scientists, ghost-writing and burying reports, collusion with regulators, this by a good corporate citizen that prides itself on being “sustainable and transparent…” 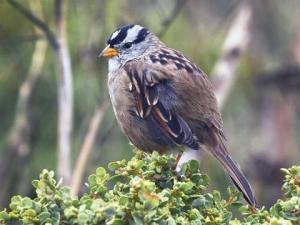 –2017 Michigan. Scientists find decreased fat stores and failure to orient in white-crowned sparrows when exposed to certain neonics, one link to declines in migrating birds. Are birds eating treated seeds? Rapeseed, often treated with neonics, is a favorite.

–2018 Washington DC. Bayer adds an amendment to the latest version of the House Farm Bill. If passed, it will prevent state and local governments from legislating local use of pesticides and override protective laws already enacted by seven states.

What’s she sipping? Neonics are systemic insecticides; they travel through all parts of the plant. Broker Rex, Shutterstock

–2017 US of A. Beekeepers lose nearly half of their hives. Losses occur during winter and summer. Neonics suspected as culprit.

–2018 California. Study shows that neonics cause a wasting disease that ends in death for bees and pollinators that feed on tainted nectar, confirmation of research that led the European Union to ban certain neonics from outdoor use in 2013.

Many wildflowers are purple, drawing bees in because they seem to have comparatively more nectar

–2017 Canada and Europe. Field studies show that worker bees have shorter lifespans and their colonies are more likely to lose queens when exposed to neonics. A key finding: bees were exposed to neonics not necessarily from sprayed crops but from contaminated clover (a favorite food) growing nearby.

–2018 England. A long-term study of 62 species finds declines in wild bees and pollinators, as much as 30 percent in some species, especially those that feed on nectar from rapeseed treated with neonics.

CBD expects 60 million acres of monarch butterfly habitat to be sprayed with dicamba by 2019. Photo by Collette Adkins

–2016 US of A. Annual count of monarch butterflies shows a population decline of 68 per cent in 22 years, calculates roughly to a loss of about a billion monarchs from 1990 to 2017. Center for Biological Diversity sues EPA over failure to consider listing monarchs as “threatened.”

–2016 Arizona. Center for Biological Diversity (CBD) sues EPA for approving use of a toxic pesticide (halauxifen-methyl) without “robust” scientific research on its environmental effects.

The lawsuit is one of 82 that CBD has currently filed against the government.

–2017 The Cornbelt. Milkweed, sole food plant for monarch larvae, all but vanishes, down to 20 per cent of former acreage, victim of an explosion of corn and soybean acreage and massive applications of glyphosate and dicamba to kill super-weeds gone rampant.

–2017 US of A. Monarch butterfly populations further plummet. Some figures put the decline at 90 percent, or nearly a billion since 1990. Monarchs follow the spring emergence of milkweed as they migrate north. Loss of milkweed means loss of habitat for eggs and loss of food for larvae.

Solitary bee on cotton. Cotton is not sprayed until harvest. Photo by Sarah Cusser

–2018 Washington DC. The U.S. Food and Drug Administration finds traces of Roundup in granola, crackers, bread, ice cream.  And an Environmental Working Group study finds contamination in oat products, including Cheerios and old-fashioned Quaker Oats. Roundup is sprayed on crops before harvesting as a dessicant to speed work in fields.

–2018 Minnesota. Organic Consumers Association publicizes the presence of Roundup in Ben & Jerry’s ice cream, supposedly made from only wholesome, natural ingredients. OCA launches a lawsuit against the owner, Unilever, for scamming the public.

–2017 Arkansas. The State Plant Board votes to ban future use of highly volatile dicamba. Dicamba is a known contaminant of soil and water and a key component of Roundup Ready Extend.

The Board has received nearly a thousand complaints about drift that can stay airborne for as long as three days. In 2017 alone dicamba drift damages 3.6 million acres of soybeans and other crops and plants.  EPA approves continued use based on Monsanto’s assurances of future control. 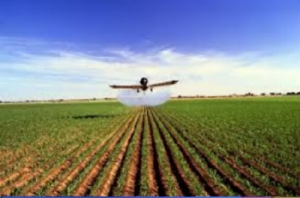 How far will the drift go? Getty Images

–2018 Arkansas. Monsanto sues to lift the state ban on dicamba, claiming farmer’s misuse of its product. The suit is dismissed. Meanwhile, another 1.1 million acres of crops and vegetation across the mid-south are damaged by dicamba drift.

–2018 Washington DC. EPA announces it will postpone rulings on Bayer’s neonics until 2019.

–2018 U.S of A. Twenty-six million pounds of Roundup are sprayed on public parks, playgrounds, schools and gardens every year.

Good God, what have we wrought? Are we too far down the rabbit hole to get out?

More on this topic in a future post from one gardener’s perspective.