Summer After the Winter of Three Degrees

Posted on August 3, 2018 by aheronsgarden

What a fickle gardener I am!

Pittosoporum were hit hard after last winter, harder than we thought. We assumed they would bounce back by midsummer, but they didn’t.

Reasonable rainfall might have promoted growth, but more than thirty inches in June and July instead created temporary rice paddies that promoted rotting. The pittosporum sulked with browned-out patches and dead and dying branches.

Inveterate gardeners that we are, we were sure we could manage them, make them presentable and they’d be off and running again. A brief morning’s work for the two of us, we predicted, a bit of pruning and thinning.

Two days later, a mash-up of gaping holes and mangled shrubs remained, and Bob was hauling the remnants to the landfill.

Another notch for Ranger, see sidebar for my post of January 2017, A Small Tribute to a Silent Partner

Belatedly, I came to understand how important the pittosporum had been to our garden. For almost thirty years they had grown reliably in tight, rounded mounds with leaves that gleamed in sunlight, conferring serenity reminiscent of well-ordered Japanese landscaping.

Back in my gardening heydays of the late Eighties, I had picked up a few pittosporum for three or four bucks each. By the time I wanted more, being parsimonious, I simply parlayed the few into many by growing them from stem cuttings.

I grouped them all into two opposing arcs, each with a watermelon crepe myrtle at its center and separated by a swathe of lawn. I felt pretty good about a garden design that seemed to work without fuss.

The pittosporum would become a simple, graceful gateway to our hydrangea and azalea gardens and a soothing segue into the riot of tall coneflower and phlox and canna and abelia and aster and aralia ‘Sun King’ and daylilies and quince and native honeysuckle and fern that tangle for territory along the side of the house.

For years the pittosporum lounged, always graceful, always tasteful, always dependably healthy and evergreen, spreading until they caressed the trunks of the crepe myrtles. Some years their perfect, undulating lines called to mind ocean swells and I would stop and look and wonder about shapes and forms in our universe. They became a topic of conversation when people visited.

Here’s the irony. I never took a picture that put pittosporum center stage. Today, that vision of ocean swells exists only in my memory. The few photos I could dig up show pittosporum in supporting roles only, incidental, no accidental, inclusions in pictures of a revolving showcase of stars.

I was, each season, seduced by the fresh and new and bright, ravishing daffodils and azaleas in spring, dazzling butterflies on dazzling phlox in summer.

Young Japanese red maple ‘Bloodgood’ in spring, with beautybush (kolkwitzia amabilis) in the background and pittosporum, with its central crepe myrtle, to the left, lush and green, but not the focus of interest

The pittosporum were simply there, a quiet mound of green that was easy to take for granted, easy for the eye to glide over, easy to ignore. It was not ravishing. It was a plain but respectable workhorse that managed to give a sense of order to an overflowing garden.

That the plants were self-sufficient and required no maintenance except for an occasional nip to shape only added to their invisibility. 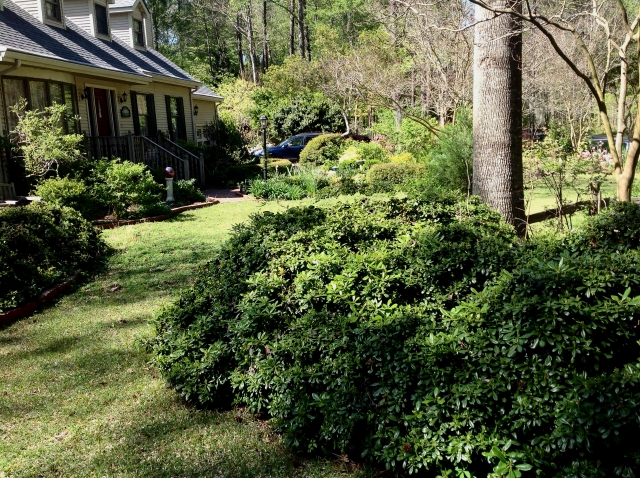 A few years BEFORE this winter, growing well despite the nearby tulip poplaby that will not be denied its gifts from the soil

After two days of hacking, yes, hacking, I realized that what I had taken for granted was in real jeopardy. Top growth that was passable was underpinned by twisted dead and rotting branches, all of which had to be lopped out. Gnarled limbs anchored to the ground testified to the roaming nature of the shrubs, so one could barely track what was growing from where.

AFTER this winter, a jumble of roots and low branches is left, some with life, others not. Tulip poplar is in the background

Pittosporum is a southern shrub, a meters-high treelike denizen of Florida that is hardy enough to handle zone 8 low temperatures.

Our tamer, thirty-inch specimens of indeterminate width, ‘Wheeler’s Dwarf,’ are a little less cold tolerant and, according to the books, may succumb at about ten degrees. Their brittle branches tend to crack under the crunch of snow and ice.

What looks like snowdrifts are pittosporum lumps under the snow

Our troopers had survived three degrees and stood up tolerably well under days of snowdrifts. . .

Usually, broken limbs sprout quickly and the plants recover quickly after judicious pruning (whatever that phrase means) in spring. Hence our optimism. The exception was one winter when plants broke up so badly and were such an eyesore we vowed to dig and replant, a massive undertaking that sent us into total recoil.

You know how these determinations go, though: the spirit may be willing, but the shoulders and shovels lag far far behind.

In the end, our ditherings were moot because no plants were available. After cold or snowy winters it is sometimes difficult to find pittosporum, nurseries apparently suffering the same hardships as gardeners.

A diligent search by a friend in the business managed to turn up one sad specimen, offered up with apologies, that we grabbed gratefully and settled into a gap-toothed space.

That single plant is the only one left in good shape today. (Which makes me think that every so often, the gardener should do “judicious pruning,” even when it seems unnecessary.)

Despite our deep skepticism that spring, those winter-torn eyesores grew into beautiful mounds within a couple of seasons. Shame on us for doubting. And kudos to us for dilly-dallying.

So we are not giving up, though the situation seems dire. We are raising the beds by a few inches and I am starting a search for new plants to tuck in among the old-timers. To hedge against disappointment, I am back to propagating. The other day I stuck about twenty or thirty pittosporum cuttings into our previously-fallow-but-now-crowded propagation bed.

And when, exactly, would these cuttings be ready to plant out — if they even took. And would they succeed on a diet of hope, faith, and Miracle Gro?

My Internet search for plants did one thing, though. It reinforced my newfound loyalty to our pittosporum. I came across an article on their culture by a garden writer who had the temerity to give them only faint praise, calling them finicky because they needed water during dry spells, and wouldn’t grow in clay soil, and you had to watch for scale and aphids, though these were usually not so terrible.

What would the front garden look like without pittosporum in the background?

How dare anyone slander my pittosporum! How dare anyone faint-praise those plants that I had ignored all these decades because they were just there and didn’t need any care in our clay soil, and never had a bug and were hardly ever pruned and never needed a drop during droughts that were felling lesser plants (not that it ever occurred to us to give them a drink) but which have lately become my most-favored plants!

O dear, is it too late to make amends? Or will fickleness receive its just desserts?

Antler look-alikes? Guess whose idea it was to dry wet gloves on upside-down table legs?

This entry was posted in Uncategorized, Winter damage and tagged pittosporum 'Wheelers Dwarf'. Bookmark the permalink.

4 Responses to Summer After the Winter of Three Degrees