Under the Garden Spade

Posted on January 1, 2016 by aheronsgarden

Alice’s tumble down the rabbit hole is quite the adventure, but it wasn’t much different from winding through the maze that lies a few inches beneath our garden spades.

Of course, if you really want to follow Alice, there is this niggling problem of size. Alice, you may remember, drank from mysterious bottles, or ate cakes made from pebbles, or nibbled pieces of mushroom to change her size. Well, consuming items that do not have dietary labels or wear dates is not my cup of tea (reference to “Alice” intended).

Happily, the Field Museum of Natural History in Chicago opens up these wonders with no suspicious toxins in an exhibit called Dig It.

We didn’t intend to Dig It. We wanted to compare this midwest gem of a museum with the American Museum of Natural History in New York City, our stomping grounds of years back.

Yup, it’s just as grand, maybe even more spacious, with arches and vaulted ceilings and balconies in the atrium, fine old display cabinets of polished cherry wood, and dioramas that carried us to magic-carpet destinations, and, oh, those gemstones.

We wanted to meet Sue, too. It turns out that Sue is a Tyrannosaurus rex of superlatives: the largest, the most complete, the best preserved, the most famous.

Nobody knows if Sue was a boy or a girl. She’s called Sue because a Sue (Hendrickson) discovered her while examining a cliff in South Dakota. Here is a picture of the 67-million-year-old Sue. She was 28 years old when she died.

We enter the tunnel

All this was a lot to absorb, so we decided a bathroom break was in order, which is when we discovered Dig It.

Curiouser and curiouser we followed the signs and wound through a special tunnel of imagination that shrank us down to the size of a penny, or maybe less, all without strange potions.

What Susan and I saw there was the invisible life in the subway of our gardens. What surprises us most? The creatures we meet are every bit as fantastic as Alice’s acquaintances. There’s one BIG difference, though. All these creatures play a role in creating or enriching soil. They mine, they dig, they transform nitrogen, or they are undertakers, disposing of the dead. 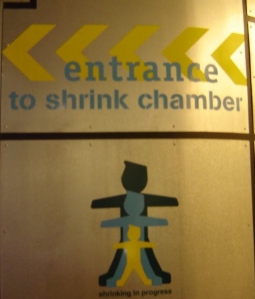 There’s a fierce, devoted mama earwig who seals herself underground to feed her babies and lick them clean, all twenty or thirty, or more of them. That ominous tail? She rattles it to warn trespassers away.

There are ants, true miners of the soil, thousands of them nesting in networks of tunnels, stirring up the soil like earthworms, bringing minerals to plant roots.

There’s a mole cricket who was born to dig, front feet shaped like shovels that breast stroke through the soil, creating winding tunnels to find worms and grubs to eat — or to keep from being eaten — or even to sing to a female. 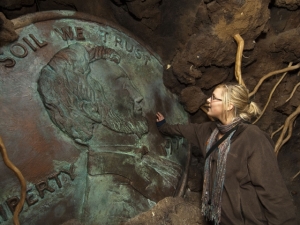 Smaller than a penny, Museum photo

There’s a wolf spider who commutes from burrow to daylight to find food. In Dig It he’s ready to suck the insides of a June beetle larvae, a fat white grub with stubby legs who would otherwise molt successfully and live as an adult above ground.

There’s a messy-looking rotten root, fungi and bacteria busy digesting it, mites and springtails grazing on the decomposers, and predators like a rove beetle hunting the grazers. Here is the underground food web in action.

There are rhizobia, not creatures, but unsung soil bacteria living in roots of plants. They transform atmospheric nitrogen into a form that plants like peas and beans can use.

There is a crayfish who looks like a giant lobster, and who, in real life, will burrow down to the water table so he can bathe his gills in water and get the oxygen he needs.

But don’t take our word for it. Have a look for yourself.