Posted on November 27, 2015 by aheronsgarden 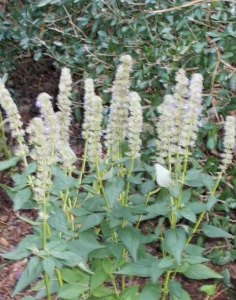 Agastache ‘Good Fortune.” I challenge you to find the blooms

Early November, Lowe’s Home Improvement was selling agastache ‘Purple Fortune’ almost bloomed out and looking like a ragamuffin, for one dollar. Like the perennial optimists we gardeners are, I rose to the challenge and bought two. Yes, I can coax these cast-offs back to good purple fortune.

Most gardener-resuscitators would immediately cut back plants like these. Such good husbandry never occurred to me. Nor did my usual excuse for leaving spent blooms come to mind – that I might want to collect their seeds. I squeezed the plants into a postage-stamp spot, figured they’d probably spill over next year and vex me. But why plan(t) ahead? In fact, I gave myself points for planting promptly and not consigning forgotten cast-offs to plant purgatory. 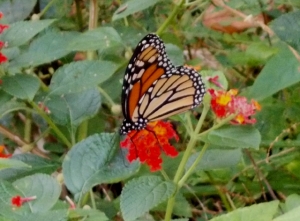 Here she is on lantana a few days later

A day later a monarch butterfly was sipping from the scant, pallid blooms. Well, now, wasn’t I the canny gardener. My lumbering movements startled this light-weight. She flew up and circled. She was perfect, fresh from her chrysalis, but she looked very very small against the gray sky, and this was, after all, November, and she had miles to go before winter.

Hey there, I said when she landed again, why don’t you try that nice low butterfly bush—it’s blooming quite respectably. The skippers seem to like it. She flew off. I walked on. She settled down. I passed her in my planting rounds. She flew. And so she danced this jittery dance each time I went by. I never did see her on the butterfly bush. 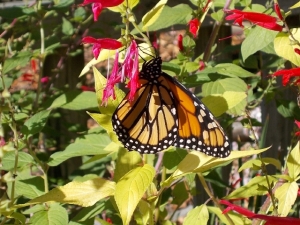 It took a while before I could tell with any certainty that she was a lady. She wouldn’t give me more than a passing glance. Conserve your energy, I suggested, but she remained wary of this pesty giant.

The vein lines in her wings gave me the first hint, boldly etched in black, unlike the male’s more delicate traceries. A closer look confirmed that the telltale spot of dark scales on the hind wings that mark the scent glands of the male were missing. 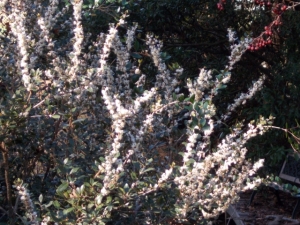 One day she was gone. The dance was over. Bon voyage, I silently called, melodramatically envisioning the winds that would buffet My Monarch under a lonely sky. Then I met her round the corner sampling sprawling lantana blooms. So much for drama.

A week or so later our holly-leaf osmanthus came into lavish bloom, a first for this ten-year-old. An eastern sun was sidling among the trees, casting its spotlight on buttons of small, oh so fragrant flowers climbing stiff branches. The wands of white flowers shined. Crowds of insects zipped in and around them, and sunshine reflected off their bodies and they sparkled like scatterings of gold dust. 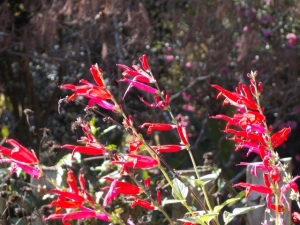 Pineapple sage, one of the best bee/butterfly bloomers in fall

Among them was My Monarch, still here, quietly sipping. In sunlight, her wings glowed like fine cathedral glass. She was gone a moment later, but that image will register long in the camera of my mind.

I looked for her next on the lantana, but it was shaded and vacant, a shuttered neighborhood tavern in early morning.

Insects that take energy directly from sunlight have little patience for plants in shade. 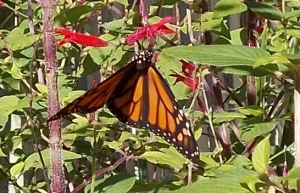 Acrobatics at the diner

A few feet away, in the sun, pineapple sage was blooming with fire, and here was the carnival. There was My Monarch in staccato action, moving from bloom to bloom. Topsy turvy much of the time, legs clasping and reclasping each flower, wings folded or fluttering for balance, antennae waving, proboscis going deep, or maybe not, hard to say with all the acrobatics, but so determined to drink from those long, tubular flowers she never noticed me. I could have reached out and picked her off. (The slide show below catches more acrobatics, but stills don’t capture her boundless energy.) 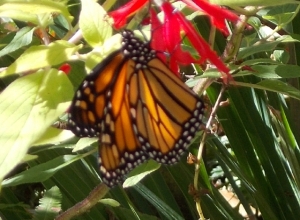 Which one is which? Three females in the garden in November

A second monarch sailed in. They could have been twins, but this one flitted. Side trip to the chrysanthemums (less agility required for sipping and a reliable pinch-hitter when frost blights the garden, but maybe second-rate nectar?). Back to the sage.

Once the two flew up and circled each other. (Checking out sex? Travel plans? Or just a friendly hello.) Otherwise, their operations were solo. 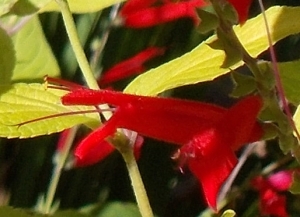 I leaned in to watch the late arrival. She jumped to another flower. I took a step and she flew up. I moved again and she left to settle on the farther edge of the patch. Gave me pause. Which one was My Monarch?

To complicate matters, a third female joined the carnival, not so dedicated to these sage blooms that require so much work for a meal.

Within moments she was up on the persimmon, wings spread, soaking up sunshine before she left. Was she the one I later saw on camellia blooms? 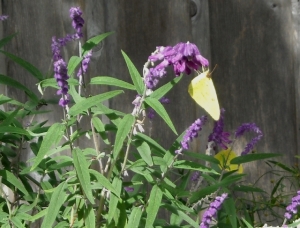 Sages are favorites of sulphurs. This one on Mexican sage, half hardy in our heavy, zone 8 soil

There were other visitors to the carnival. Giddy, fidgety, unremarkably brown skippers with wings akimbo when they alight, or so it seems.

If skippers went to psychiatrists, they would be labeled ADHD and prescribed a chill-out on opium blooms.

They rarely settle and sip, instead they dive and zoom, chase and circle each other with such speed a mere mortal can’t single one out of a bunch. 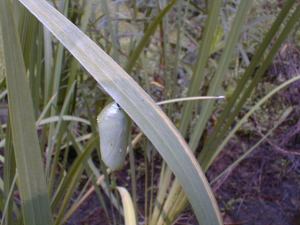 A monarch newly wrapped in its chrysalis

A solo cloudless sulphur fluttered in. Earlier in the season bright yellow sulphurs supped long and greedily on the sage, then disappeared.

As I watched, six or eight or more began to converge on the patch, probably freshly-hatched from eggs laid by September diners.

They tackled the sage with skill and inherited experience. No struggling, no maniacal balancing acts, no flailing legs. Their table manners were positively fastidious. 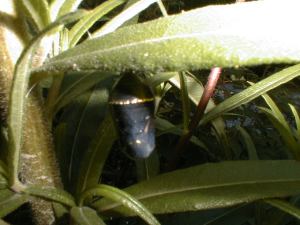 Chrysalis is darkened by the monarch’s body, its god buttons shine, as, the butterfly prepares to emerge

The carnival brought back memories of the year we discovered monarch caterpillars chewing on milkweed in our ditch garden. We worried there weren’t enough leaves to go around. Did the fat ones live and the skinny ones shrivel? Four or five managed to pupate on swamp iris blades near the milkweed.

We watched as their crumpled reincarnations emerged and they pumped up their wings to fly for the first time and somehow we felt they belonged to us and our patch. 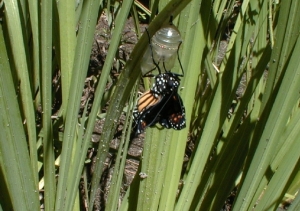 The struggle to emerge. Note the transparent chrysalis

One day they were gone. Just like that. No goodbyes. No thanks for the milkweed memories. Just gone.

That was in September when food was still abundant and a flight to Mexico seemed reasonable.

Now I wondered if faltering supplies of flowers under short-sun days could fortify our three sippers on their way to Mexico. The sage here keeps pumping out blooms in pleasantly warm weather, but each day the carnival of flowers thins. 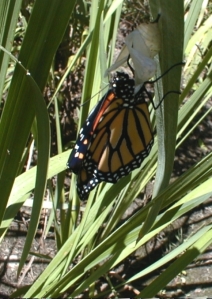 Fully emerged. Damaged chrysalis reminds us of the struggle

It appears (to me) that nectar is most abundant only at certain times in a flower’s life, further slicing the window of appeal to sippers.

I keep urging foragers to seek the freshest blooms, but they do not take my silent advice and may even gravitate to inauspicious time-worn blooms instead. There must be some secret I am missing.

I apologize. I have meandered and must return you to today’s carnival. The buzzing has been there all along, but I am only now waking up to its music.

It’s a familiar sort of buzzing, as Winnie the Pooh might say. A chattery buzz that signifies joy and busyness. Two decades ago I used to hear this buzz when burford holly bloomed in spring and glossy abelia bloomed in summer. I have not heard it since, though I listen and listen. 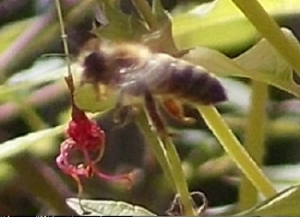 A busy moment for this bee, though she will take time to check out the spent bloom

Honeybees! Yes, they are here, the first I’d seen in years. I’m surprised to see them working red blooms with deep throats. These flowers have two strikes against them: honeybees don’t see red, and their mouth parts are much too short to reach deep for nectar.

Honeybee color vision is shifted toward the blue end of the spectrum. They see ultraviolet rays but red becomes black. I’m betting there’s some blue hidden in those sage blooms (dying blooms become soft fuchsia), and some ultraviolet, too. Ultraviolet rays can create patterns and runways, invisible to us, that guide a honeybee to dinner. Do the bees see red sage as deep blue? 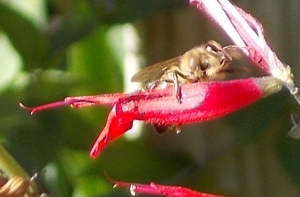 Honeybee will slip her proboscis between petals to reach nectar

Granting the color-appeal of sage blooms, how could they get to the nectar? They looked to be biting the base of each bloom, but bees don’t bite. They worked with speed and deftness, not biting, but nudging petals apart at the base to reach that tiny pool of nectar. Doggedly they visited flower after flower, testing, sipping, rejecting, omitting, re-testing (absentmindedly?). Like the monarchs, they worked blooms upside down, clutching at petals in fast, frantic gestures. 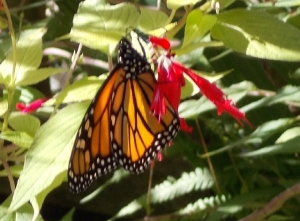 Meanwhile the monarch works hard for a few sips

One honeybee was so giddy she scurried around the floor of the deck, furiously poking at fallen petals. I watched her until I could stand the wasted motions no more, and though I usually don’t interfere, I gave her a little swat which lifted her to real live blooms. She was soon lost in the tangle.

A few, very few, bees had gathered pollen into dull yellow balls safely tucked into baskets on their legs. Pistils hang on to the flowers, attached by long white styles, but stamens that carry pollen are mostly missing. Only one bloom out of many yielded two stamens, each with a tiny platform that held the barest dusting of pollen. How long it must take to fill that pollen basket. 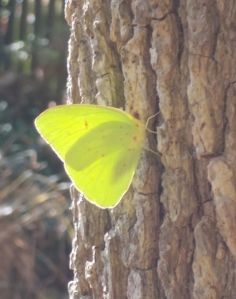 The weather is chilled. Sunshine is fickle. Flower gleanings are lean. The monarchs are gone. A few dedicated honeybees remain, along with some wispy wasps barely visible among aging flower stems.

A couple of inches of cold rain precede tonight’s cold front. I empty the rain gauge. I find a lifeless honeybee floating and I wonder what stories she could tell. Next morning I find a motionless sulphur berthed on the bark of a sweet gum tree.

The carnival is closing for winter.

This entry was posted in butterflies, fall bloom, Honeybees, Uncategorized, wildlife in autumn. Bookmark the permalink.