(Go to Peterhof and Catherine Park for pictures and discussion about these gardens.)

We were staying at Herzen House on Bolshaya Morskaya. (Remember those names, they have a nice ring, don’t they? and they figure into our Historical Whodunnits.) Herzen House is a cozy place, reasonable, centrally located and very well run, with a full complimentary breakfast and sweet porridge that tastes like rice pudding, and gray coffee, and good tea and cookies all day long.

Now, Gostiny dvor, the covered shopping yard on Nevsky Prospekt doesn’t figure into our historical whodunnits, but we should mention it because it became our anchor for the week. Gostinka, as Russians might call it, is where we met for tours and where we caught the metro and the bus.

It’s probably the oldest and largest shopping center in the world. (And we thought Mall of America was top banana.) Inside are no-frills concessions on bare concrete floors, though the classical 18th century exterior has a certain frayed charm. But who cares about architecture. The vending-machine coffee smelled  heavenly.

Gostiny Dvor from across Nevsky Prospekt

Why don’t you try some? Susan suggested, ferreting out some coins that might or might not work. We pondered the couple dozen push-buttons labeled in cyrillic. What do you want? she asked. I have no idea. I can’t read that list. Just punch the same buttons as “that woman” in front of us. (Did I detect a subtle rolling of the eyes? Nevertheless, Susan was game.)

On the alert, but casual, like a trained agent, Susan scrutinized “that woman’s” every finger-touch, committing each to razor (I hoped)-sharp memory, yet managing to keep our target oblivious of  surveillance. When she left, Susan deposited a random collection of coins. With precision and speed, she duplicated the pattern as only a trained agent could.

Then the agent and her assistant lost their cool. In anticipation of – what? — we bent near-double over the low spigot. As liquid poured out, we could hardly believe that Susan had cracked the code. The coffee tasted as heavenly as it had smelled. In fact, retrieving coffee may have been the coup of the week. 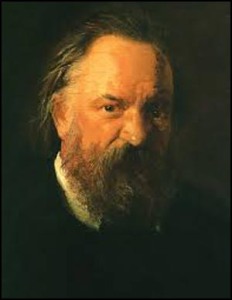 Every place in this town has an ancient footnote, maybe several. Finding the connections is like following historical whodunnits through the centuries. Take the Herzen House–Bolshaya Morskaya–Tolstoy–Church on the Spilled Blood nexus.

They tried to shut Aleksander Herzen up by regularly exiling him from St. Petersburg, but he wouldn’t quit promoting his radical socialistic ideas on farming and freedom for serfs. He and his compatriots — Pushkin, Gogol, Dostoevsky, Turgenev, Tolstoy — were among the shining stars of Russia’s golden age of literature in the 1840’s. They were all censored.

Sometimes brutally under Tsar Nicholas I who ramped up the secret police and restored the death penalty to stamp out new ideas that had blown in from the west. His misguided wars killed millions of serfs and his backward economic policies were a disaster. But Nicholas had the luxury of dying comfortably in his bed.

The Arrest of the Propagandist, Ilya Repin

Today, the world knows the names of these once persecuted writers, but it has largely forgotten about Tsar Nicholas I.

Aleksander Herzen is revered today as the finest political writer and philosopher of the era. Russian universities carry his name, as does our hotel. The perennial exile, who wrote newsletters and broadsides from London, lived here with his wife and son for a year in 1840.

Now, Bolshaya Morskaya, as we have mentioned is the street address for Herzen House. It also happens to be where callow socialite Princess Betsy lived, and where Anna’s and Vronsky’s delicious tete-a-tete took place during a particularly stifling, upper-crust soiree.

Pretty shabby, you are thinking, mixing fiction and fact in a historical whodunnit. Well, yes, that was a crafty geographic way of linking Herzen and Tolstoy. Readers of Anna Karenina may remember landowner Levin’s frustration with unproductive farming methods and his struggle to inspire feckless serfs. Here, Tolstoy, a good friend of the “brilliant” Herzen, is promoting Herzen’s ideas in his fiction.

Alexander II, Emperor of Russia from 1855 to 1881, one of the greatest reformers in Russian history, known as Alexander the Liberator to his people

Which brings us to Church on the Spilled Blood. Nicholas’ son, Alexander II, didn’t have the luxury of an easy death.

We took countless record shots of the elaborate onion domes that pierce the sky wherever you go in historic St. Petersburg. Close-ups. Long shots. From the garden. Along the canal. At dusk. At high noon. In sunshine or under clouds. My, did we have records, none of which capture the splendor of this Church of the Resurrection of Christ, more colloquially known as Church on the Saviour of Spilled Blood, or simply Spilled Blood.

Mind-boggling detail on the domes

Inside, the church dazzles with light and color. Walls and ceilings are covered by huge mosaics of biblical themes so detailed they look like fine paintings framed by lovely patterned borders. Why such splendor teetering on the edge of a canal?

The story begins with the crowning of Alexander II. His accession to the throne kindled maniacal joy in the country. Here was a ruler people could worship, a kind son taking over from a hurtful father.

The artistry of mosaic taken to grand heights

A reformer, too. Had he lived, he might have altered the trajectory of Russian history.  Two days before he died, he planned to announce the formation of a duma, or parliament, a radical step that could have moved the country toward greater political stability.

He took time to listen to Herzen’s and Tolstoy’s ideas (actually commuted one of Herzen’s frequent exiles) and sympathized with the serfs. They had become slaves, freely bought and sold, strong young men and nubile women favored on the auction block, used as collateral in card games, sent off to war, families broken, the aged tossed out after years of service.

In 1861, two years before Abraham Lincoln, or The Great Emancipator, freed American slaves, Alexander II freed Russian serfs. This was no tidy Emancipation Proclamation. The decree was long and confusing. Serfs expected full freedom and land. Landowners didn’t want to lose land or serfs. Magistrates were sympathetic but powerless. Nobody seemed to be in charge.  (Can we say that there are some parallels here with America’s experiences?) 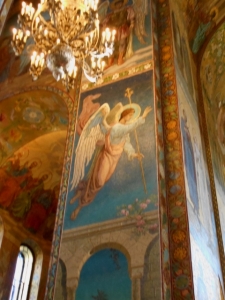 Mosaic or Painting? Can’t tell if you don’t know

Despite reform, anarchists remained impatient and bold, and Alexander was their target, though severa attempts on his life had failed. Finally, in March 1881, a member of a terrorist group, The People’s Will, threw a grenade at Alexander’s coach. Alexander was unhurt.

Instead of turning the matter over to guards, he got out of the bullet-proof carriage (a gift) to talk to the conspirators. A suicide bomber acted on this serendipitous face-to-face. Bleeding heavily from his lower torso and legs, the tsar died a few hours later, affirming a soothsayer’s prediction that he would die wearing red boots.

Like Lincoln, the tsar was deeply mourned. Here was a  tsar who had promoted local self-government and locally elected judges, abolished capital punishment, taken privileges from nobility, and supported universities. At the same time, an efficient and brutal secret police was intent on rooting out terrorism and was sending thousands, real or imagined radicals, into exile in Siberia. No surprise that this act of The People’s Will brought even more oppression to the Russian people under succeeding tsars.

Yet another face of the church

We could not begin to fathom the patience and skill of fine artisans of the past, who, before they could begin work on a design, had to craft colors and tiles from raw materials, then shape and blend them seamlessly in mosaics so fine they can be mistaken for paintings.

The church was not finished until 1907, but it would be short-lived as a memorial.  A decade or so later, after the Revolution, it was ransacked and looted.

And the work goes on today

In 1930 it was closed, then reopened during World War II and the Siege of Leningrad as a morgue for those who died from combat or starvation. After the war it became a warehouse and, with sardonic humor, was called Saviour on Potatoes.

Finally, money began coming in to restore the church. Restoration took 27 years, three years longer than to build. The church was reopened in 1997 but is not a full-time place of worship. It is one of St. Petersburg’s finest tourist attractions.

We were beginning to understand how the turbulent history of this country, its bold crusaders, its peasants, and its powerful rulers are represented in venerable monuments that weave complex tales over time to create a tapestry of a civilization. 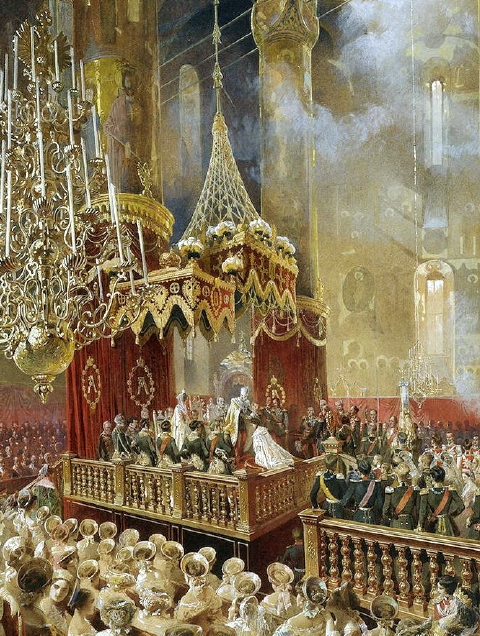 A stunning painting by Mihaly Zichy of Alexander’s coronation in Moscow in 1856. Here, the emperor is crowning the empress