Dateline October 1, 2013. It was sleeting when we arrived in St. Petersburg. What in the world were we doing here, two garden lovers 90 miles from the Arctic Circle on the cusp of winter lurching into town along Muskovsky Prospekt gaping at blocky Stalin Renaissance apartment buildings during rush hour.

Then there was the luggage. Susan’s was missing from the carousel of mostly shrink-wrapped bags and mine was padlocked. Creepy. 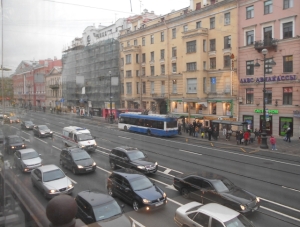 That’s when we realized we were strangers in a foreign land. Best take an independent approach. The bag, it turned out, had been put off to the side behind a cordon of yellow crime-scene tape (Why? Didn’t care.) We grabbed it like thieves and raced out of the terminal and into our waiting cab.

As for the padlock, that was a cliffhanger. We were not sure the exceedingly business-like concierge understood what we needed, nor were we sure we understood what she was telling us. Never mind, there was still tomorrow.

Throngs even on Sunday, but the mood is happier

We weren’t walking fast enough. Not for these rush-hour Russians. We were finding our way along Nevsky Prospekt, which I had naively imagined to be a quiet old cobblestone lane in a quaint historic district. Instead this was a boulevard in gridlock with smashing architectural features that we would only come to appreciate later in the week.

Our destination: Gostiny dvor, or Merchants Yard. This was a practice walk (run) to make sure we knew where to meet our city bus tour.

Apparently, we were lagging in the race. Not allowed. This was a pushing-shoving rush hour. Nobody smiled. Nobody said excuse me. Closed-faces gave warning: don’t get in my way.

We would love to have known her story. Note hammer and sickle on red scarf

We stopped to get our bearings and a closed-face coming from the Metro paused to (Maybe?) ask directions (Of us?), then harumphed when we mumbled something back in English that was unintelligible even to us.

For a brief, very brief moment, we caught our breath and sat down on a bench in a kiosk at the Gostiny bus stop. We smiled at a matron sitting nearby. It’s what we do at home, a smile, a nod, a finger wave.

She openly glared. Her eyes probed us from tired hair to worn-in walking shoes and back again. Was she going to tell on us? We minded our business from then on. We wondered if this was going to be a vacation in silence? 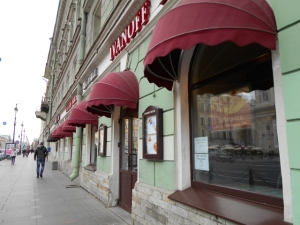 We remember the interior as disconnected from the elegant façade, shadowy, muted, quiet, a haphazard mix of seasoned country kitsch and old world bits and pieces that looked like lucky yard sale finds.

Eliseyev Emporium and food mart, built in 1902, is pure elegance, worth a stop

The waitress seated us wordlessly and left. We fumbled with the menu, eggs, latkes and salad looked reasonable. We waited. Nobody seemed to notice us. We watched people coming and going. We waited. We got the feeling we were supposed to know something we didn’t know.

It is difficult to summon a waitress when you don’t understand the language and there is no eye contact, no smile, no glance.

Inside the Emporium. Scrumptious ! Chandelier lights are reflected in the glass

After a while you can’t quite be sure of what your waitress looked like. Every step of the way, it was a long meal, and we never did figure out the protocol, if there was one, and it took us a day to figure out how much it cost, though the exchange rate was really pretty simple.

That night Susan googled “Why don’t Russians smile?” Yes, the question is discussed on Google. We learned that Russians are a fun-loving people and laugh a lot among good friends and family but are buttoned-up with strangers. Fair enough, we said, and fell asleep hoping the padlock would be off tomorrow.

Another Nevsky art nouveau landmark, the Singer Building, largest bookshop in the city

It was. Promptly at 10 am the hotel maintenance man dropped the freed bag like a hot potato in our room. He left so quickly we had no time to thank him or give him a smile or a tip. We guessed he didn’t expect it.

We were beginning to understand. Russians are just not effusive. They don’t stand on the “have-a-nice-day” ceremony. They are courteous but efficient about doing what needs to be done. In fact, Russian men can be quite gallant, quick to open doors or stand aside, but we never saw a smile or made eye contact, or noted acknowledgment of our thanks. Life here may be simpler if one remains aloof.

How we laughed with Caroline!

One moning as we lingered over a late breakfast we were rescued from the silence of remoteness. Caroline sailed in, brisk and hearty, as though she’d known us forever. “You must be Americans,” she said. “You’re the only ones laughing.”

Caroline grew up in England, so quite naturally she became second cousin to us. She had come in by train from a convention in Moscow intending to take care of some business and, incidentally, to holiday in St. Petersburg. She was having second thoughts.

Amazing how easy it is to establish ties with strangers in a foreign country simply because they sound like you. Does that mean we’d be ripe for a con artist one day? We spent some lovely, laughing times with Caroline; the bottle of wine we shared at the fine Italian restaurant around the corner from us probably figured into the festivity. 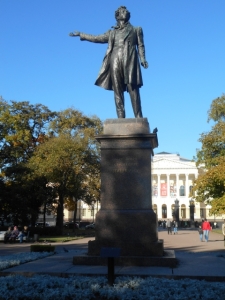 Pushkin the poet hailing a cab outside of the Russian Museum

As time went on we would learn that deference and dignity does not preclude a certain sardonic humor that reminds us of the call-a-spade-a-spade humor of New Yorkers. For instance, you can’t go far in St. Petersburg without finding a statue of some favorite son on a pedestal, one arm flung out to the side, hailing the world. A noble gesture, you think, until someone tells you, with a sly grin, that they are really hailing a cab. (Except for the statue of Catherine the Great. Apparently women didn’t hail cabs in those days.)

The day before we were to leave on a very early flight – sigh, no sweet porridge that morning — the concierge, efficient as ever, surprised us. She reminded us to pick up the lunch-to-go she had ordered for us. How nice! Later, I happened to bump into her at the door of the breakfast room. Our eyes locked and we laughed. I had a good feeling.

Russian humor? Pectopah means restaurant and this one is a steakhouse with typical Russian food