The Taming of the Garden

Posted on August 2, 2013 by aheronsgarden 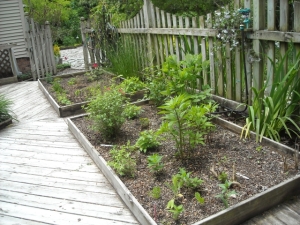 The other day I turned my back on the garden—just for a moment, mind you. Well doggone it, that corn grew as high as an elephant’s eye. You are thinking, perhaps, What a bonanza of good eating. Not so. No neat rows here. This corn was scattered through beds, elbowing respectable plants. How thrifty the squirrels! All these plants from a corn feeder we’d put out for them.

While the corn was jumping out of the ground, poison ivy was sprouting from seeds planted by birds after a good meal and launching itself across the yard. Blue Pacific junipers were inviting wire grass to Come on over and grow a spell. Creeping Charlie was leaping and elephant ears were stampeding. 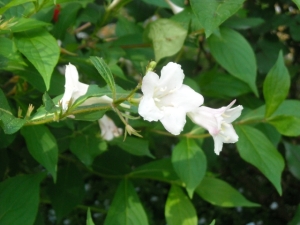 Seems a shame to whack back these late weigela blooms but. . .

Streamers were exploding like Roman candles from Lady Banks roses and abelias. Butterfly bushes were rangy. Spring shrubs, revived from the drudgery (to them) of blooming, were nudging their neighbors. Weeds were masquerading as legitimate boarders in the borders.

I am! I said firmly.

I am? I asked, but quietly, so the unruly mob would not think they could take advantage of me. If they had shown the slightest bit of self-discipline, I might have ignored them. Instead, fueled by baths of rain and sunny days, they felt free to crash through the garden.

My curiosity about new volunteers (weeds, usually) and how they would grow and flower (and, yes, go to seed) and my misguided tenderness for waifs causes trouble in the garden to this day. Belatedly, I am coming to believe that truism, If you give a plant an inch, it will take a yard.

The last yellow swamp iris bloom, a beauty but the plant is a notorious spreader

So I make my resolution. Today I will become a hardhearted Whacker and Weeder. (Except for those few stray seedlings that may be asters. . . or maybe goldenrod…)

Be firm, I remind myself.

Whacking! Ah, Whacking! Off with their heads! I say like a mad queen as I dash about the garden with my trusty pruners creating piles of trash. Such satisfying work with so little effort. Yes, I do it all with a pair of Felcos. Much more fulfilling to use shears, but in my delirium I don’t want the plants to look hacked. 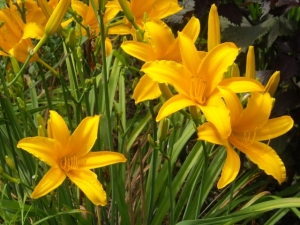 Once bloom is gone, the daylilies are cut close

Butterfly bush, whacked half way down. Spring bloomers, divested of hopeful streamers. Daylilies and iris, scissored off. Southern Indica azaleas, beguiling but too big for their britches, cut way back. Oops, left some sticks there. Never mind, there will be no beanstalks in this garden.

Except maybe that six-foot-high mullein in the path that’s just coming into bloom. . .

A spire of mullein. See why I get in trouble?

Hollyhock and foxglove, lopped off or pulled up, depending on how tawdry they look and whether I can coax another year’s bloom out of these biennials. (Mostly I can’t.) For good measure I toss their seeds back in the beds and hope for gifts next spring (see why I get into messes?). Or I store them in a box I will forget about.

Tracy DiSabato-Aust, in her excellent book, The Well-Tended Perennial Garden, discusses how and when to prune perennials to prolong bloom, prevent floppies, and keep the garden tidy. Emphasis is on pruning at the right time, which means planning ahead (not my strong suit), and making decisions (another weak suit) about what gets whacked, pinched, or nipped. Gardening is such a nasty business. I love it.

The “invisible fence” keeps plants in tow. Compare top, where plants are reined in and bottom where plants sprawl. From K Mart.

For the pruning enthusiast there are also instructions on how to delay bloom. The idea of delaying bloom would never enter my head. I’m invariably ecstatic over whatever bloom I can get wherever and whenever I can get it, and I am not a fan of staking and pruning.

So I go for easy fixes. The best one yet: cheap, light-weight, low decorative fences plopped in front of totterers and leaners. They are easy to install and a much more natural alternative to staking floppies or whacking rebels.

Unfortunately, when I Whack I expose the tangle of Weeds hiding beneath the Whackees. This requires Weeding, which is not nearly as satisfying as Whacking, but it forces to me to look closely at the scene.

Crossvine once covered an old locust with blooms, now it puts roots down everywhere. Will Cook photo

Most times I wish I hadn’t. I usually see more work. Sometimes I make delightful discoveries, such as plants I’ve forgotten about that are growing happily without my care, but maybe they’d like a rescue from the rowdies and a place in the sun.

These are repeat offenders and will never recognize my authority. They laugh at me behind my back.

I should mention that old romper, creeping Charlie, who is irksome but doesn’t qualify for the big leagues. His shallow-rooted streamers will take over in a season, but they pull easily, especially if they set down roots in compost. They mound into large tousled bundles that are most gratifying to a gardener like me who views big piles of trash as a grand accomplishment. Charlie’s good nature about being pulled up probably comes from knowing he’ll be back next year from mere slivers of roots that resisted my entreaties.

Creeping Charley, nice groundcover but it will cover your plants, too

Tough, aggressive wire grass requires a more devious approach. Once we tried some four-star grass killer in flower beds, but it knocked the good guys unconscious and the wire grass took revenge next season.

We do not argue with wire grass. We resolved the juniper-invitational problem by digging up the juniper and replacing it with a wide ribbon of rudbeckia goldsturm. We call this solution “cosmetic starvation.” It is an attractive way of shading out most of the grass and keeping whatever makes its way above ground hidden from view.

Rudbeckia holds its own against wire grass

Nothing in this world is perfect. Rudbeckia can be as wandery as wire grass, so we had to figure out a way to keep it from ravaging plants that were flanking it. We finally sank a 1 by 6-inch plank along the length of the flower bed. This fix has been in for a few years and, except for an occasional intrepid jumper, the rudbeckia remains contained.

When I am tempted to grumble about grass that pops up after the flowers are deadheaded, I remind myself that I have never spent any time pulling grass in summer heat and humidity.

Cut and Paint is another relatively successful technique I use. (Keep that word “relatively” in mind.) It works on trumpet vine, Virginia creeper, poison ivy, catbrier and cross vine.

We ignored the elephant ear poking timidly up in spring. The bold look is grand, but not all over the garden

I clip the vines as close to the ground as I can and paint them with straight glyphosate. This can be tricky business. To reach the source of the vine I must crawl through tightly planted beds balancing pruners, paint brush and a jar of the herbicide. If I am not careful, I might paint a plant I like.

In all honesty, I only undertake this task when I feel I must do penance of some sort. Mostly, I do Pulling and Ripping, which are grand for releasing aggression but not for eradicating weeds.

As for elephant ear and lizard tail, Cut and Paint does not work on them. They travel the world by stolons that seem to be indestructible. Our elephant ear has popped up 50 feet from where it was originally planted. Lizard tail, an agile rascal that is native to eastern swamps, jumped out of our pond and waltzed around the back yard clear up to the front yard.

These require patient pitchfork-and-spade drudgery after a good rain has muddied up the soil. While we’re digging, the plants tell us that if we are even more patient, they’ll see us next season.

This roadside aster escaped into my beds, knowing I am a softie. It becomes a froth of white in fall

Japanese honeysuckle is the winner of big-league weeds. But we’ve established a truce: I rip away at the vines when they threaten a plant, and they grow where they want.

At least we don’t have kudzu.

And so the garden rolls on. Next season will bring new blooms and new challenges for Whacking and Weeding.