Time and the Osprey and the Shadbush

I hear high-pitched keening and I see soaring birds, and I feel privileged to witness the wonder. Our osprey have returned. 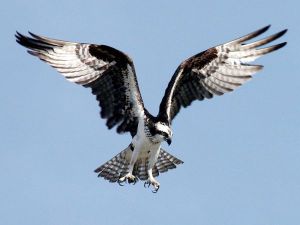 Half a century ago, an osprey was a rare sighting. They’d consumed so many DDT-contaminated fish, their eggshells were too brittle to survive brooding, or hatchlings were so deformed they died soon after birth. Time, and the removal of DDT from the insecticide arsenal, have granted the osprey a hearty recovery.

Today, they’re nesting in Albemarle Sound. Until the decrepit cypress tree they used as a platform for their twiggy, higgledy-piggledy nest got felled by one hurricane or another, they nested right down the canal from us. A couple of years ago they moved to more substantial quarters on another canal, but we still see them overhead. 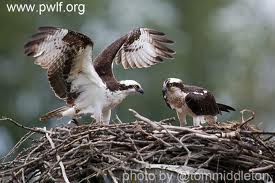 Year after year they’ve returned on schedule, around the first of April. After their 3,000-mile trek from Argentina, they spend some well-earned time carouselling the skies, performing daring aerobatic duets above the trees. In quieter moments, they become domestic, rearrange their nest to suit.

They are a majestic pair, six-foot wing span, white underbellies and white heads, deep and steady wing beats. The crook in their wings and their bright white heads make them easy to identify. Their dives are spectacular affairs, feet-first splashes, and we gasp with panic, wondering if these bulky birds will ever rise from the water with their prize. 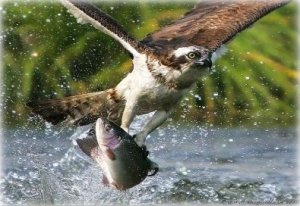 Strong talons wih tubercles like velcro are holdfast for slippery fish, but a large fish is still a challenge for a bird weighing less than four pounds. About Falconry blog

Shame on us worriers! Ospreys are meticulous about oiling their feathers, and their hollow bones are almost weightless. Still, we are relieved to see this bird take off, having somehow aligned the slippery fish headfirst into the wind, aerodynamically streamlining his profile.

I look away from the sky and hunt for the blooms. It must be time. Yes, they are there, a wispy constellation of white that would be inconsequential if they weren’t among the first in spring. In our garden the shadbush bloom can be upstaged by more flambuoyant bloomers. At the edge of a leafless woods, though, it sparkles, the first splash of white you’ll see in spring. 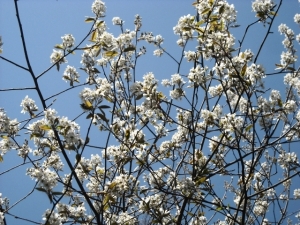 Shadbush blossoms against a spring sky

Given rich moist soil and light sun it makes a nice small tree with edible, bright-red-with-a-hint-of-purple berries that ripen in June to give birds their first taste of fresh fruit after winter pickins’.

The shadbush is hard to find in nurseries but worth the hunt. Few other trees are so closely interwoven with the life of early colonists. The affection they felt for it comes through in the variety of names they gave it: 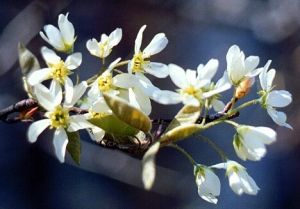 Juneberry, because its berries were used in jams and jellies, pies and muffins, steeped for medicinal teas and dried for later treats. Or they were eaten right off the tree, in fierce competition with thrushes, mockingbirds, orioles, even woodpeckers.

Serviceberry, because the plant bloomed when the first funeral services were held for those who had died after the ground was frozen. 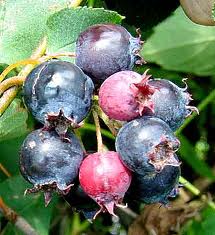 Sarvis, because it reminded homesick colonists of an Old World tree by that Latin name.

And shadbush, or shadblow, because the tree blooms at the same time the shad are running. Like their relatives, herring and alewives, the shad leave the sea each spring to swim upstream to spawn in fresh water.

Stories tell of rivers boiling with fish, never-ending streams of them, dark blue-green and silvery, teeming toward spawning grounds, a joyous time of plenty for folks who lived along the water. Along the east coast this annual event was awaited with eagerness. 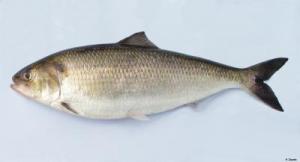 The shad, a spring mealtime staple in spring

It’s no coincidence that osprey return from their winter sojourn and begin nesting at the same time the shad are running. Spawning herring and shad make for easy catches, fast food.

And what prompts the shad to run its race up rivers to spawn so dependably? One of the triggers is a rich food supply! Shad feed, no feast, on plankton, microscopic plants and animals that “bloom” in the sunlight of spring. 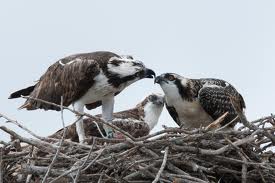 It all takes place with consummate timing, one event following another, linked fast in a great web of time and weather and circumstance that we barely understand. Time, in days when people fished and hunted and went a-berrying for their suppers was told not only by the clock, but by when the shadbush bloomed, the shad spawned, and the osprey returned.

1 Response to Time and the Osprey and the Shadbush