The April that Dripped Blossoms

I will never complain about a rainy winter again.

How rainy was it? you ask.

I will tell you how rainy it was. One day in January I was racing the sun to plant some shrubs in a front bed. I had dug starter holes to mark locations.

(Who am I kidding? Starter holes! Fancy talk for refusing to admit I couldn’t dig more than a few inches down before I hit clay dumped from road construction, then rain-slicked into a pancake before it dried to faux concrete.)

So there I was, fighting gray clay, when the evening turned gray and my spirit turned even grayer. Enough, I said. I walked off the job, leaving pails of sand and compost (feeble bribes for asking plants to grow in clay prisons) tossed pots, tools (well, just a couple of shovels; I hadn’t gotten to the pickaxe stage), with tottery plants balanced in starter holes.

Not so. (Though I wondered what was with those tipsy plants and empty pots.) Then I remembered. Oh. Yes. . .all that rain. . .and another unfinished project.

By now, mid-April, I have straightened the wobbly plants and the daffodils that hide the unwanteds have already bloomed and the ditch is dry-ish!

To have a lovely spring garden, we are told to water in the fall. Fat chance of that. My watering can is limited strictly to reviving already flattened plants in summer. Never mind dragging a leaky hose around to plants that are finally looking perky on the chance they’ll shine next spring.

Hmmm. I looked around. Maybe, just maybe, those plant gurus are on to something. The garden was so rich with blossoms that fragrances suspended on light breezes were sweeping along paths and around corners to tease me.  So I followed them. . .

Some plants surprised me with their exuberance this year. Some had moped for years, others had teased me with on-again off-again blooms, still others rebelled in gray clay under loblolly pines that always seemed to be raining needles.

Spirea ‘Mt Fuji’ was one of these, quite the show on a gray day in early spring. Its leaves streaked with white, a crowning feature, are less fascinating to me today than when I first spied them in a nursery. In fact, its sister, spirea ‘ogon’ is much flashier, with bright yellow leaves. But this year, those tiny five-petaled flowers brought sunshine into the garden.

Leonard Messel Magnolia, developed from a chance seedling found in a garden in England, was about two feet high when it came to us  in a quart pot many years ago. Here it spreads its branches wide to the sky, sweet, pink, strappy blooms with muted fragrance, that too soon blow off with the wind.

So dependable, but so early they surprise me each spring when they explode. Like all magnolias here, once established, they dominate the canopy with heavy growth that limits plantings to shade lovers.

Armand Clematis is the earliest-blooming clematis in my garden, a parade of stars romping along the fence where we keep our potted cuttings. Once I gave it a place of honor near a special tree. Then I realized it was upstaging the special tree. So I moved it to the backyard and the special tree died. 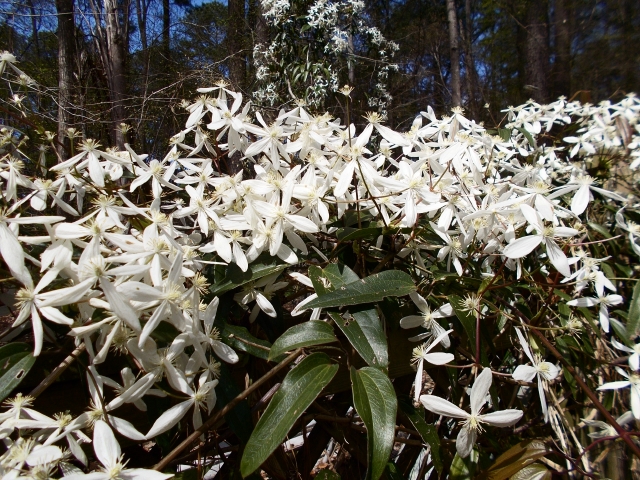 Lenten rose, Hellebore orientalis sparkled as it has never sparkled before, though I must confess to sprinkling some fertilizer on the plants at one time or another. It’s been a long time since I planted the original pioneers, and, sadly, they went into hiding after Hurricane Isabel in 2003. These are seedlings that the original plants bequeathed to the garden.

Loropetalum bloomed the entire month of April, the blossoms eclipsing its deep purple leaves. Thirty years ago, it was only questionably hardy here. Since then it has settled in nicely.

It’s planted too close to the driveway (Who thought it would get so bushy it would cramp the car?), so it got regular haircuts that removed most blooms. Finally, we limbed it up to a small tree just out of reach of our pruners. It laughed at us and reached for the sun and gave us a lovely surprise bouquet.

Double Reeves Spirea, this one with classy pedigree, grown from a pinch-off in a University of Virginia garden, smuggled out in my sister’s capacious purse. A fantastic bloomer in sun, later than airy Bridal Wreath spirea, with a take-no-prisoners approach to blooming. Do you think this ten-year-old cutting, a descendant of the original cutting needs a haircut?

Close-up of the Double Reeves spirea remind me of snow balls tumbling from the sky.

Japanese snowball bush, a grand fountain of flowers in a friend’s garden, shrank to almost nothing in our garden. The deer helped with the shrinkage. It’s been rescued, repotted, rescussitated, replanted twice in fifteen years and I’d just about given up. This year the gawky, top heavy shrub bloomed like a champion for almost a month, and now it is big enough to prune to shape. 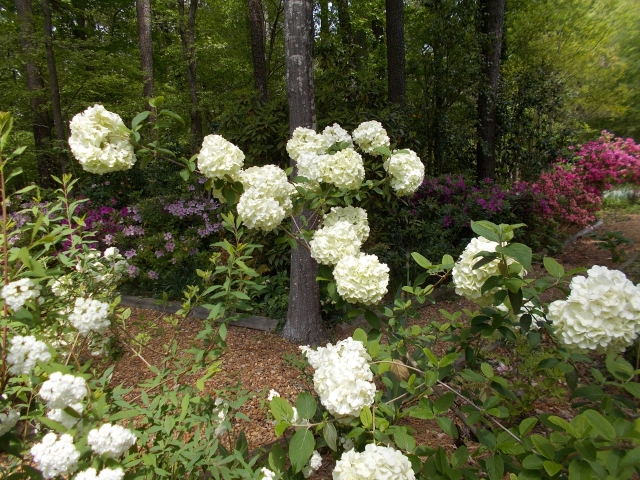 Here’s an earlier view of blooms still greenish but just as pretty. The white “snow cones” behind them is another Double Reeves spirea, and behind that is a loropetalum kept trimmed.

Azaleas, even those in full shade, outdid themselves this year with profuse and large blooms in a joyous spectacle across the garden.

Demure deutzia nikko – I’ve given this plant to just about everyone I know. Here, in very little sun, its blooms are scattered, so are not as spectacular as sun-grown plants. Still, I must include it, as I love its airy blooms, and it is a sturdy edger that travels in a polite way.

Columbines, at last they have come back to my garden. This from a chance seedling, but the delicate red and yellow blooms of the native are scattered about, too. I hope they stay. 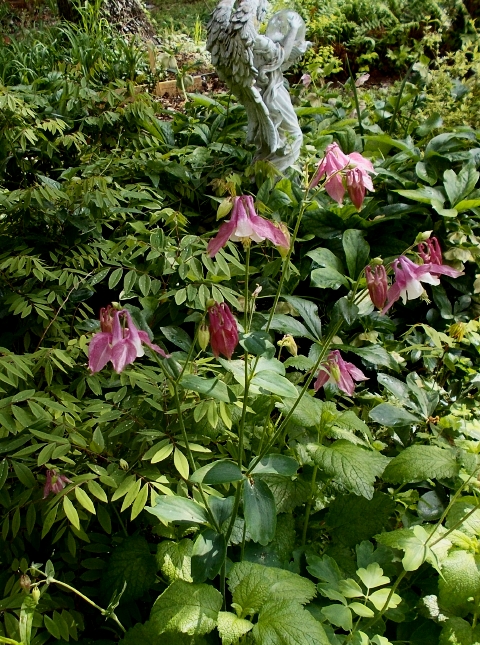 Deutzia ‘Chardonnay Pearls,’ a froth of white billowing over chartreuse leaves, was a charmer many years ago when it came on the market. It’s still a charmer for me, but I don’t notice it in much in nurseries any more. It brightens a semi-shady spot in our garden and never seems to complain. 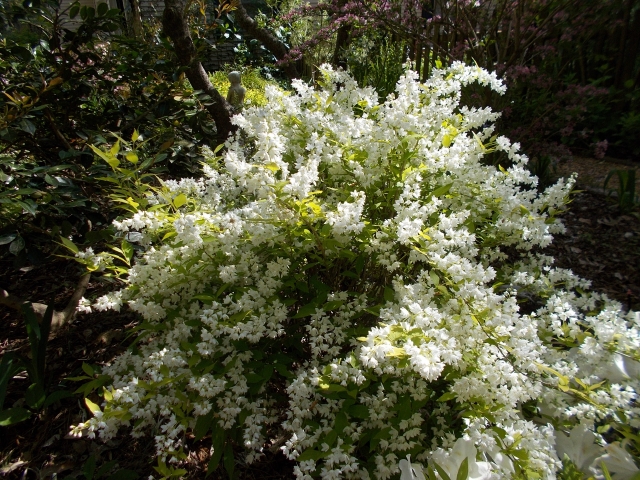 Lady Banks rose – Many years ago I saw one draped over a fence along a country road. I had to have it. It’s a fixture in southern gardens, and in those days you could find shrubs for a few pence in family nurseries whose owners grew plants because they loved gardening and loved propagating. It’s always been a carefree standout, but this year the blooms crowd the branches with color.

Pfizer viburnum we call this shrub, as does everyone else who has it from us (though it’s probably either European or American Cranberry Bush), since it came from Pfizer Pharmaceuticals parking lot in New England.

Months after we took cuttings from the plants, we learned that the fence they were fronting was part of video security triggered by movement. Oh well, five minutes of notoriety for a couple of skulking senior citizens. Despite our heat zone and shade from pine trees and ubiquitous clay soil, it puts on a respectable show, especially lovely this year. 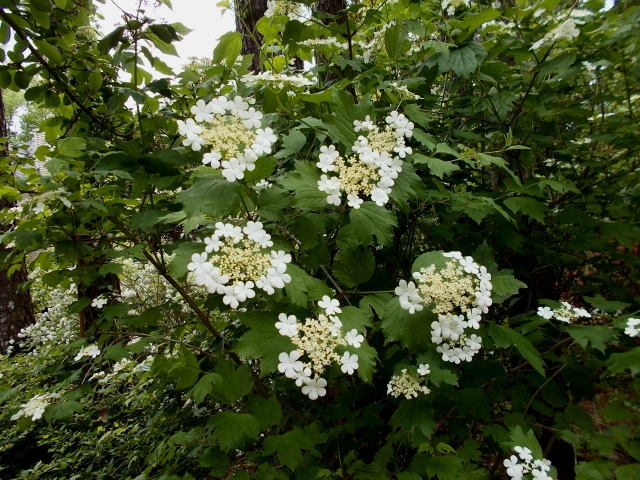 Native honeysuckle is winding through unruly but quintessentially lovely quince ‘Jet Trail’, preferring the shrub to the arbor we so kindly provided.  I think the two are partners, each thriving on the other, but oh my, the housekeeping is most untidy. Both are old plants now, the honeysuckle has a thick trunk, and the hummingbird often drops by for an evening sip from a ripe blossom.

Fothergilla is the prettiest bottle brush I have ever met. It’s a native that has struggled pretty much everywhere I have tried it, even with generous bribes of compost. This particular planting has additions of sand, compost and wood shavings/sawdust.

Sometimes a combination of plants blows you over. These two, Viburnum rufidulum, or Rusty Blackhaw, and azalea ‘Pink Ruffles’, a Rutherford hybrid, were not intended to be companions. The viburnum was planted to hide the telephone pole, which it does not because its growth is so open, and the azaleas were planted because I had some extra rooted cuttings and there was an empty space.

This year, the duo stunned me. The viburnum seems to be floating off on its own, with no intention of covering the pole, and the azalea is on for the joy ride, though flagging a bit in the recent heat.

And now it’s May and blossoms are truly dripping. Their petals scatter the lawn, drift across paths, float on the pond,  brighten the mulch, until they dry and brown and blend into the past. And we who look to the future, wind springtime into memory and watch for peonies and iris, roses, daylilies, phlox and hydrangeas. And so the garden turns.

There is a certain satisfaction in seeing petals from the Japanese Snowball bush drip onto the ground, an achievement of sorts for a shrub that is finally showing such promise it needs to be shaped and trimmed.

10 Responses to The April that Dripped Blossoms