My Love Affair with Mulch

Back is Broke, Shoulders Sore
But Still I Carry the Torch…er Pitchfork

A love affair with mulch? How desperate can she be?
Truly. Hear my story.

It was not love at first sight. Half a century ago I barely knew what Mulch was, nor did I know of his sister, Compost. The first glimmerings came when I began to think it was stupid to rake dead leaves and stuff them in plastic bags (compliments of our town) for delivery to some high-rise dead-leaf tenement city over there, somewhere.

Besides, maybe I could use those plastic bags for other things. Much easier to toss the leaves into the sandbox-playground the kids had outgrown. Occasionally, other garden undesirables, like gnarled, broken, unpromising peony roots were added.

One day one of those unpromising peony roots bloomed. My perfectly planted-by-the-book peonies never did. What had those dead leaves wrought? 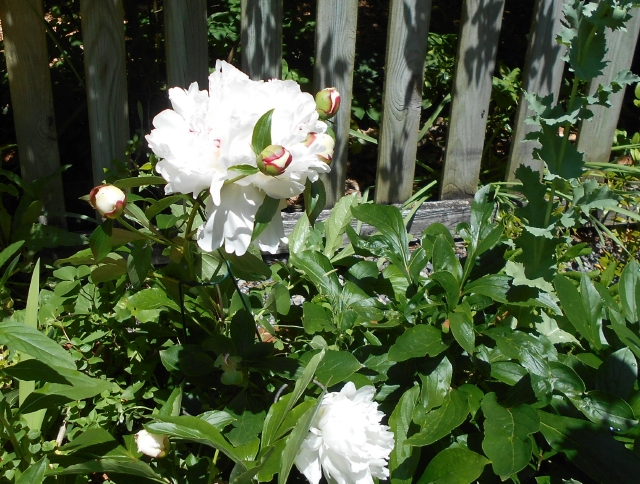 Festiva maxima, a piece of that peony from years ago. The best peony I’ve found for our Carolina heat in a bed of perlite and finished compost. Still nothing compared to the peonies I saw on the black rich floodplain of the Hudson River in New York State

I am thinking back to this now because Mulching turned out to be our fall adventure this year.

Most years mulching for us is a routine affair. We rake, Bob shreds, I spread. The chopped autumn salad composts nicely on garden beds and, if applied liberally, keeps winter weeds at bay. After so many years of this routine, our soil is rich.

Usually there is a pile of leaves waiting to be ground on top of this black dirt composted from leaves of past years. After thirty years, this is what our soil looks like. Opportunistic tree roots are taking advantage of idle good soil, but we’ve already rescued pots of it for use when planting

But rich soil doesn’t necessarily compensate for land sinking and sea level rising and volumes of rain that bring puddles and sogginess.

We needed volumes more mulch than we could create. Immediately. Mulch soaks up water, regulates its seepage into the ground. Puddles tend to disappear from sight (if not in fact).

Azaleas are planted on hills of compost, their shallow roots happy above the puddles  — maybe. The flooded area is large, so I’ve not been successful in raising the entire bed. Tree branch is a victim of twig girdler

Like Disney movie-magic, the answer to our dilemma came from above one day. Linemen from our electric cooperative began trimming branches near power lines.

I happened to be outside when the basso-staccato of their chipper-shredder began to bellow. My spirit came alive, sort of like what happens on that first musical thunderclap in Phantom of the Opera.

The tree trimmers were great, took time to tell me what they planned to do with our crepe myrtles near the street

Now she’s comparing leaf-grinding to theatre. Tell us, do we need tickets for the rest of the prodction?
Tease me if you want.

Could you leave us a pile? I asked. Sure! It will be big. That’s OK. You can put it in that driveway on undeveloped property.

Jumping ahead in the story. In lieu of a picture of the pile which I forgot to take, here is what the mulch looked like on the ground after leaves had fallen

It smelled good, too. I could imagine a pine forest. Or a walk in late-autumn woods, damp moldering that signals toadstools on dead wood or microscopic millions prepping meals for hungry plants. Or dust in the air. This monumental pile represented the future of our garden.

But first this monumental pile had to get into the garden. Somehow.

I still needed to figure all that out so I dawdled over a cup of tea, or maybe two. 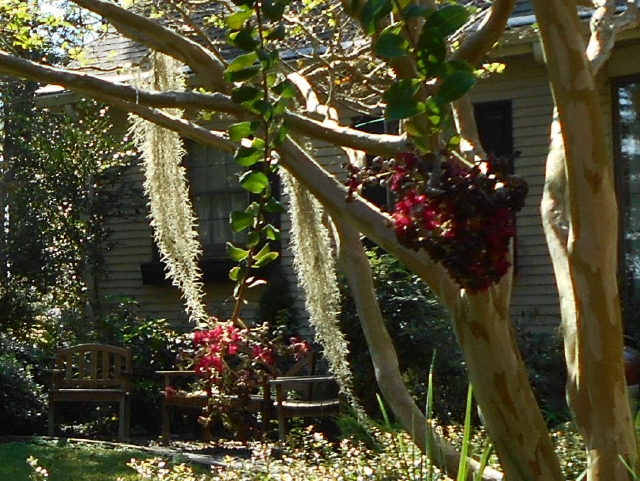 Where else to relax on a sunny day but on a bench near a fading crepe myrtle festooned with Spanish moss streamers?

Which gives me time to tell you about the vicissitudes of my romance with Mulch.

Will we read about this in some True Confessions magazine?
Probably not. Too tame.

I’d given cold-shoulder to most mulches. Pine straw is one. It’s hard to lay in place. It should be thick to keep the ground moist and the weeds down. (You never see a weed in those bulky pine-straw donuts people put around trees here.) And pine needles take forever to decompose, add little organic matter to the soil. 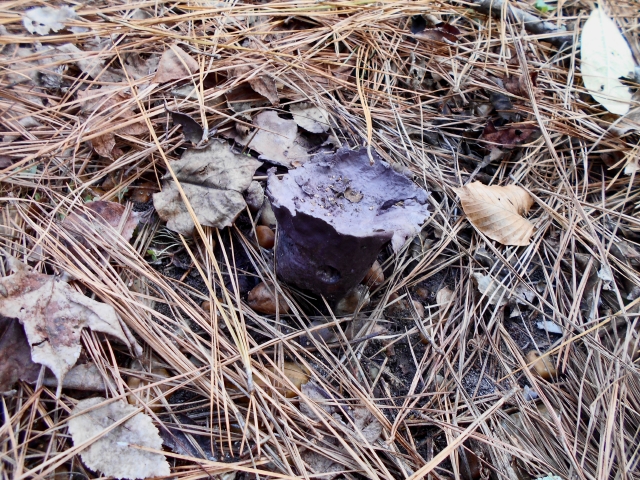 To be an effective weed suppressor, pine needles must be laid more heavily than pictured. The mushroom tells me the soil underneath has some organic matter. We have an abundance of pine needles that we usually grind with leaves

Fresh bark mulch from the nursery looks smashing. Once down, a gardener feels like he/she, not the weeds, is in control. It conserves water. It decomposes more quickly than pine straw, but it adds few crumblies to clay soil.

This path pictured ten  years ago, was mulched with bark. Edgers are landscape ties to keep soil in raised beds from spilling onto path. River run with landscape cloth under it has replaced the mulch and is weed free unless seeds from rowdies I have planted escape

If you live near a peanut processing plant, peanut hulls are fabulous, especially when laid on a few inches thick. They keep out weeds, soak up moisture and create good black soil fast.

They are uniform in appearance and resemble river-run rock from a distance. What’s more, they don’t need frequent replacing. Which is why we dressed paths with them years ago. Today, our paths would be most fertile. 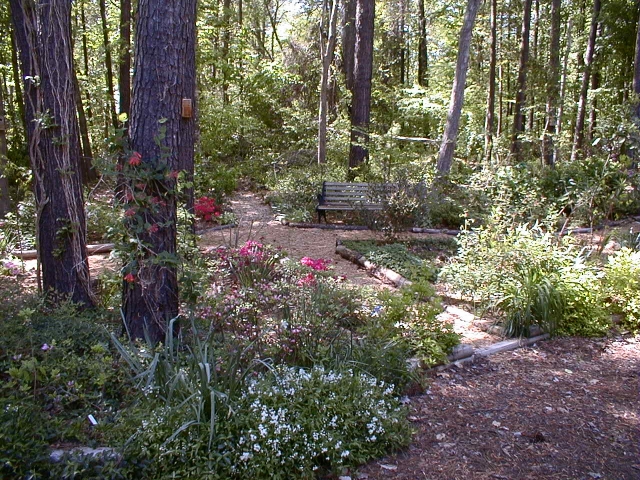 Year 2001. That’s how our peanut-hull paths looked before Hurricane Isabel came through in 2003 and knocked out paths and trees

Would we had used peanut hulls on our beds instead of on our paths. We still could, of  course, but that four-hour round trip for peanut hulls doesn’t have quite the appeal today as it did those many energetic yesterdays ago.

Another view of woods and paths now gone. In fall they would be covered with leaves that we would rake onto beds, leaving packed peanut hulls still in good shape

Of all these, our garden grindings are the most reliable, the most dependable of mulches. They say you have to work to keep love alive. That we do. Between Bob’s grinding and my broadcasting, autumn golds and browns quickly become dark soil when spread generously on beds. (Weedy plants are banned from the mix, carted off in Ranger.) 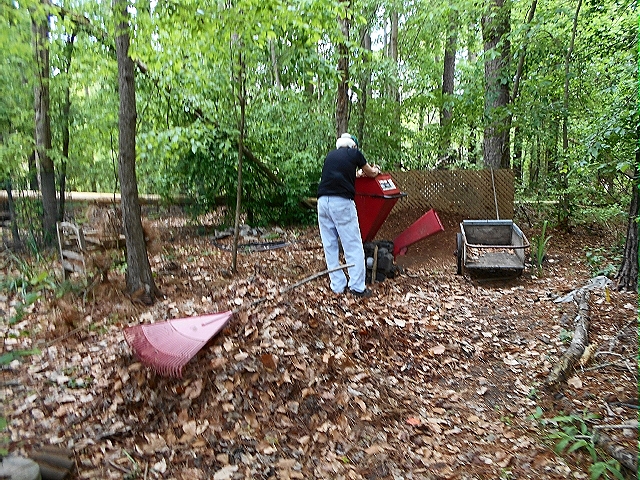 It’s been a long and beautiful relationship. Hurricane Isabel sparked the romance in 2003. We lost countless trees during that storm, but in the weeks that followed, many of them found their ways back to our garden as roughly ground mulch.

Even then, the rumble and whine of chipper-shredders stirred memories of those piles of dead leaves that brought a peony to life in a children’s abandoned playground. 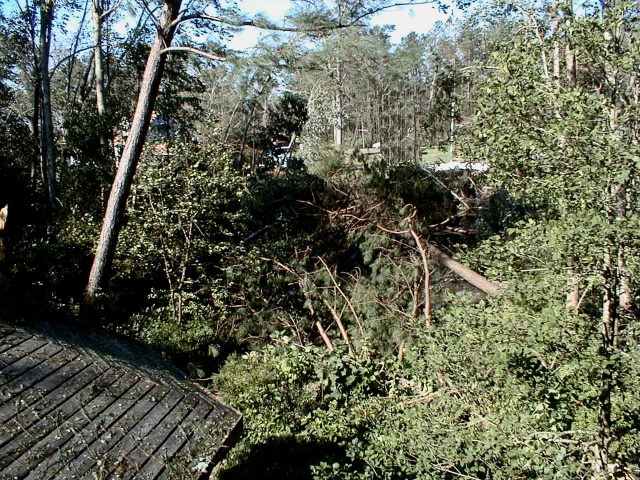 Our backyard after Isabel. Into the chipper for many of these trees

Breakdown was faster than we expected. The jumble of sizes, shapes, and textures may have helped the process along to create a veneer of soil that was a dark rich gift to the clay.

Back to the present. That cup of tea gave me the boost I needed to figure things out.

Pickle pails and Ranger (our 1992 Ford truck, in case you haven’t followed Ranger’s life history) would be our helpmates. We loaded 20 pickle pails onto Ranger’s bed each time we drove to the driveway. That is, Bob drove because the driver’s seat doesn’t adjust any more and my feet can’t reach the gas pedal.

Pickle pails staged for mulching. There’s no picture of the chipper pile, we worked so hard I forgot to record it

It took a while for us to come up to speed, but we managed a routine: Bob hauled pails, and I scooped and stuffed. We worked quickly because the pile was settling and had to be turned with a pitchfork to loosen it. Back at the garden, Bob unloaded and I spilled and spread. Rain settled the mulch in.

It seemed we had everything under control. Halfway through the pile, work stopped.

Ranger had been feeling poorly. Nothing serious, we thought. Just seemed a little sluggish. Surely Ranger could rise to the occasion. 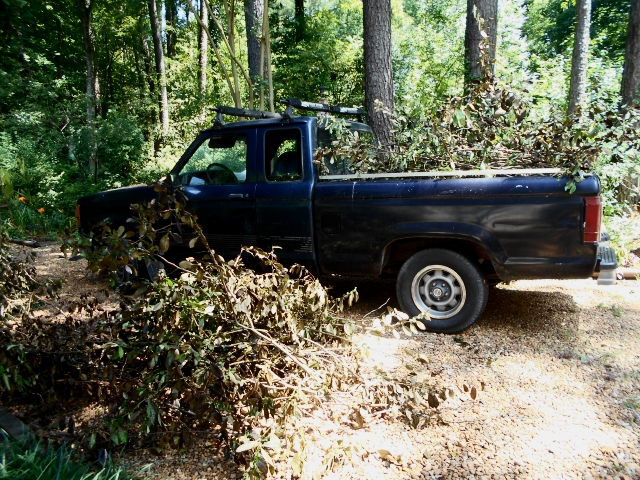 He was up on the rack for state inspection when he gave out. Would this be the end for our 28-year-old partner?

He had to be towed to our favorite mechanic. How embarrassing for this workhorse! What’s the verdict, doc? we asked.

Ranger’s heart had given out and he had an aneurism. In car talk, this meant a failed fuel pump and a hole in the air line to the carburetor.

Our mechanic is a pro! Replacing the fuel pump was routine for him, but a new air line for such an old truck was elusive. He reached out to dealers, parts suppliers, even owners of junkyards, in an exhaustive search.

Well, he said like the pragmatic surgeon that he was, we’ll just put some duct-tape over that hole and he’ll be good as new. And so he is.

We’ve just about finished hauling. Last count, recorded on our eraser board so we wouldn’t forget, was 260 stuffed pickle pails. We’ll be up to 300 before we’re done. 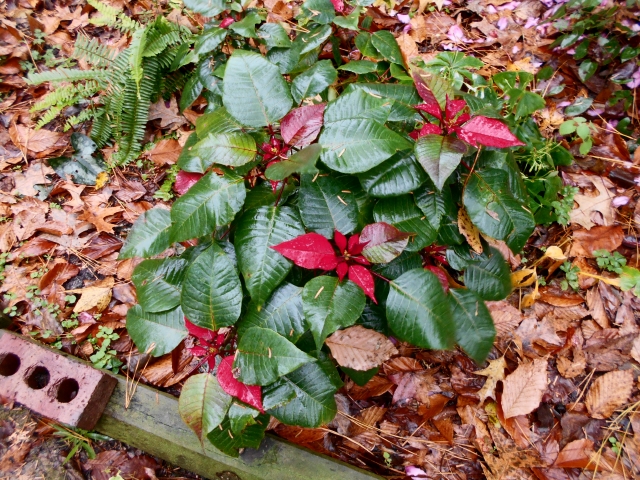 Rainy days are best for mulching! Messy but good. The soil is wet and the mulch is wet, so plants are not stressed by putting dry mulch on a dry bed. During hot dry weather beds should be watered before and after mulching. Here, leaf fall has naturally covered the bed before poinsettias were dug, but not thickly enough yet to prevent weeds

My love affair with mulch goes on. Time for another cup of tea.

Even though mulch is covering the puddles, you can tell this bed is wet by the healthy moss growing on the concrete mushrooms. Camellia sasanqua petals add their caresses

3 Responses to My Love Affair with Mulch