A New-Age Experiment on an Old Southern Tradition

At the end of August good friend Steve invited us to come by for a try at making sorghum syrup at his barn. This would be an adventure, he said, as no one attending had any practical experience making syrup. But, for a start, there was guidance passed down from old-timers, and the Internet dispenses a generous buffet of book learning. And, he added, this would only be the small beginning of an annual tradition.

Sorghum syrup! My northern-bred bones thought sorghum syrup was a relic by now. After all, you can’t find it in a supermarket.

Making “molasses” or “sorghum molasses,” as it is often called, became a southern tradition during the Civil War, when northern blockades cut supplies of sugar. Sorghum cane grew happily in the South and resourceful farmers soon honed techniques for pressing the sweet juice and boiling it down.

This is a long and labor-intensive process — tailor made for community camaraderie and celebrations of the harvest. There are few practitioners in today’s hurry-up world, but nostalgia for these good times still lives, thanks to wisdom handed down through generations.

A long time ago, I had an untidy brush with sorghum syrup in a western North Carolina restaurant. There, on the menu, was an entry for buckwheat pancakes and sorghum syrup, right below a sinful entry for light and fluffy Bisquicks with butter and maple syrup. (My kind of breakfast!) Buckwheats and sorghum? Not so tempting, but a good friend of mine, Anne, loved them, and they sounded so-o nutritious.

How far wrong could I go

One bite. One bite and I spent the rest of breakfast lusting for Bisquicks and maple syrup.

Memory has mercifully dulled my senses, but what I recall of the meal tasted like a medley of tin, dirt, bog (whatever that tastes like) and bottom-of-the-bag Harry Potter jelly beans.

(By now I have mightily insulted my southern neighbors and the sorghum-molasses-syrup lovers of the world, so I’d better back out of this tunnel and simply call the flavor complex.)

In my defense, I would like to point out that even though sorghum flour makes highly nutritious tortillas, most tortilla-eaters prefer theirs made with corn. Nutritious sorghum silage is, however, fed to cows. I wonder if cows would prefer corn if they were given a choice.

Well, I would give this sorghum molasses a try.

Now, for those who may be seeking advice on sorghum-syrup-making as a second career, or even just a sideline hobby, here is a step-by-step guide to help you achieve the ultimate success – delicious, nutritious, sorghum molasses.

Be forewarned. This undertaking is not for the faint-of-heart. It takes patience, persistence, and honing of skills that are mostly lost to us.

If you are still serious about sorghum-syrup-making, you should plan to spend Fourth of July, or, if you prefer the more traditional barbecueing, then the day after, planting about a quarter acre sorghum seed in rows, about a hundred feet long. After the canelings are up you will have to thin and weed.

Sorry, but your local nursery probably does not sell starts in pots. Remember, summer days can be hot. Hydrate to avoid heat stroke. Knee pads and back brace recommended for novices. For tips on fertilizing, check out the 1891 University of Arkansas Agricultural Bulletin #16. Very informative.

Some time late August or early September the cane should be harvested. Before being fed into the press it must be “dressed,” which means stripping the leaves from each individual cane and chopping the heads off. (Seems to me this activity should be called “undressing the cane,” but I am an ex-northerner, so what do I know.)

This is a big job, so you will want to invite a dozen or more unsuspecting good friends to your sorghum-syrup party. They will be “dressing the cane” but you needn’t mention that in the invitation. Be sure to call it a party. Everyone loves a party. Which means that you should have enough finger-lickin’ food on hand to bribe, er, feed, them all.

You will need to find a sorghum mill for pressing the cane. A diligent search of old barns across the south will no doubt turn up a rusty cast iron mill that you can either bring to Antiques Road Show (hold the rust remover) or have refurbished and repaired by a sorghum-mill restorer. Check out an old copy of the Yellow Pages.

An Enthusiastic Mule (or horse) is key to success. Without The Mule, there will be no juice, since The Mule must walk around in circles to turn the crank to press the cane to release the juice. Unfortunately, mules these days tend to be independent, so you might have to substitute a ride-on mower for The Mule. The rider need not be enthusiastic, but he should be mellow.

You should assemble a small, knowledgeable crew to feed sorghum cane into the mill and draw off the pale green juice in buckets. (If you are short on buckets, you can use five-gallon pickle pails.) Your crew can be chosen from the first three or four individuals who respond affirmatively to your invitation.

You will need to construct a fire pit. This should have sturdy support for the trough that will hold the juice and a chimney constructed of concrete block. You can probably find directions for this in an old Popular Mechanics magazine. Check out Useful DIY projects in the Index.

But don’t worry if you don’t have directions. This is an easy weekend project. You will have plenty of time left to fell a couple dozen trees and split the logs needed to maintain a crackling fire for the several hours it takes to boil the juices down. You’ll get about one gallon of syrup, maybe, for every ten (or more) gallons of liquid you pour into the trough.

Be sure to have a variety of kitchen tools like ladles and sieves on hand. The liquid must be continually stirred to keep it from burning as it thickens, and the green gook that rises to the top needs to be regularly skimmed off to maintain peak flavor.

These tools are all available from homey stores like Bed Bath and Beyond. Alternatively, you might find some in those old barns you’ve visited. Wash thoroughly to remove spider egg cases.

Production was in full swing when we arrived. There were maybe fifteen of us and what seemed like a thousand (though I’m not good at counting this type of thing), no, at the very least ten thousand sorghum stalks piled on an assortment of truck beds and trailers scattered along the farm road.

Steve had graciously assured us we were not expected to work. But when you see piles of maybe twenty thousand stalks hanging off truck beds, it seems gauche not to volunteer. And besides, lunch of hot dogs and fixins’ would be served after stalk prep, so it was in everyone’s best interests to hurry the task.

A ride-on mower proved to be an exceptional substitute for The Mule (except when the rider was called off duty to monitor lunch preparation). Steve’s horses must have gotten wind of the project because they made themselves scarce. One dissolved into the shadows and the other had that attitude that says You’re crazy if you think I’m idiot enough to spend my day walking in circles.

Bucket after bucket was emptied into the trough. Time came to start the boil.

The fire roared. Smoke churned out of the chimney.

Steam rose from the trough. Stirring the liquid and sieving off green goop began nonstop.

The piles of wood that had seemed so grand began to disappear stack by stack.

Expectations were high, but it would be a long time before syrup would actually appear. The hardest part of the process is knowing when to take the sorghum syrup off the fire. Too early and the syrup is watery; too late and you run the risk of a burnt product.

Next day, we waited anxiously to hear the results.

. . .those piles of pressed cane just did not produce enough juice to make for a reasonable quantity of syrup. The cane had been planted too early, in May, instead of July, and it was already drying up by the time it was harvested.

When the liquid finally boiled down into a syrup of sorts, there was so little left, even vigorous stirring could not keep it from burning. A single jar of syrup was rescued. Nobody liked it. It was poured down the drain.

We came away with renewed respect for those intrepid farmers a century and a half ago who began the sorghum-syrup tradition. They had to figure out what to do from scratch. They couldn’t tap Grandpa’s memory or the Internet. They had to persist until they got things right. And then they invited the community to celebrate the harvest. 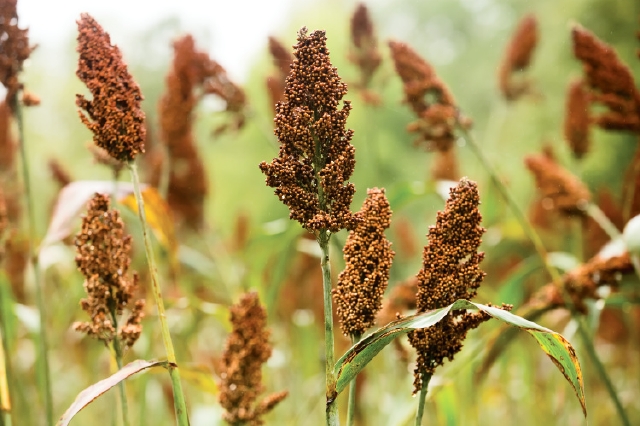 Next year, another try

Steve says there will be another try at Sorghum Molasses Day next year. They’ll change some techniques based on this year’s hard-won experience. And he promises the cane will already be dressed by the time we arrive! Maybe next year we’ll all get a taste of real sorghum molasses for a new twist on an old tradition.