Empress Josephine: Plantaholic for the Ages

Her Passion for Plants Enriches our Gardens Today

She was attractive, willful, extravagant. She was smart, manipulative, acquisitive. She was passionate about plants.

But she had no money.

In fact, the first three decades of her life read like a Victor-Hugo epic set against the turmoil of 18th century revolutionary France.

Marie Josephe Rose Tascher de la Pagerie was born in 1763 to prosperous creole sugar-cane plantation owners in Martinique. She was a child of the tropics.

She’ll be a queen, a soothsayer once predicted, but when hurricanes destroyed the family’s holdings the prediction seemed off the mark.

At fifteen she was sent to live with an aunt in Paris and a year later married to a well placed but ne’er do well aristocrat. Fifteen years later, he would meet an untimely death by guillotine.

Josephine, with her children, visits her husband in prison. Oil by Jean Louis Hector Viger, one of the finest French portrait painters in the  19th century

Already arrested as an accessory, Josephine might have been next on the block but for another untimely death in 1794: Robespierre, major player in the Reign of Terror.

Then she met a general called Napoleon Bonaparte. He was on fire for her. She thought he was boring. Still, he was ambitious and there were distinct advantages to a formal union.

They would marry two years later. She was 34, a widow six years his senior with two children. It was a union of tiffs, tears, dalliances and dramatic reconciliations. It was a union that would allow Napoleon to build an empire. 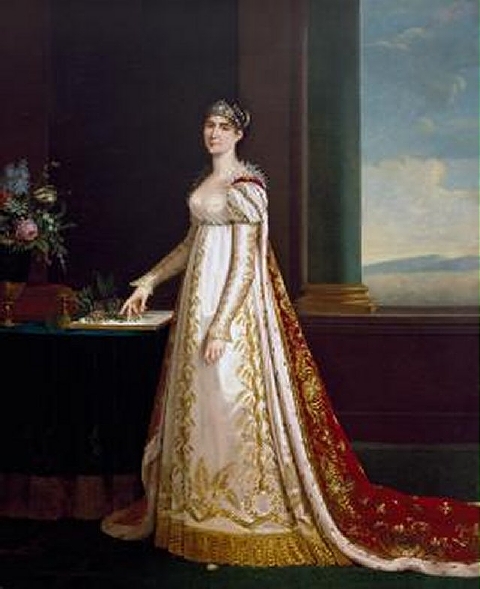 In 1799, while Napoleon was off on a campaign to Egypt, Josephine borrowed money to buy Le Chateau de Malmaison, an over-priced, ancient, high-class fixer-upper west of Paris with acres of tangled gardens and a murky history. The purchase began Josephine’s entrée into the world of plants and politics. 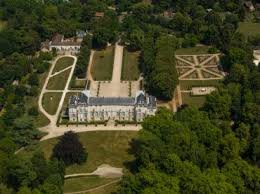 Aerial view of Malmaison showing rear of chateau. Landscaping and formal rose garden to the right are not historic

She poured money into redecorating the chateau and taming the garden. She hired landscape architects and gardeners and built a heated orangerie that could hold 300 pineapple plants. A huge glass house for tropicals and roses would become the focus of her plant collecting. Eventually she would establish a nursery to provide plants to commercial growers all over France.

View of the Chateau de la Malmaison next to the park/garden, aquatint by  Auguste Simon Garneray c.1812

She haunted flower markets for the unusual. She conferred with scientists and nurserymen, supported botanical research. She became a self-taught botanist, though she still preferred using common names for plants and animals. She introduced plants and set trends for novice gardeners intoxicated by botanical wonders from exotic shores. 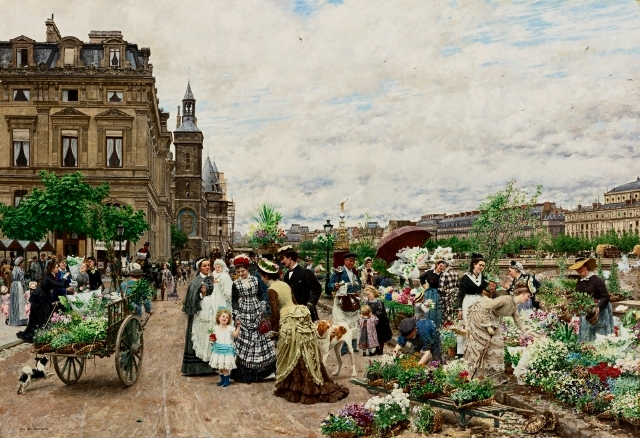 Throughout the 19th century,  crowded flower markets all over Paris offered thousands of plants  for sale. At one of these Josephine is said to have found a then unknown bulb (Brunsvigia), huge, slow-growing, with spectacular flowers, that eventually bloomed in her garden. Marie Francois Firman-Girard 1875

She wanted the estate to be known as “the most beautiful and curious garden in Europe, a model of good cultivation” with rare and exotic plants and animals. Here, imported plants would naturalize and live in harmony with native plants in artful and pleasing design. “I wish that Malmaison may soon become the source of riches for all [of France]”

Napoleon was livid when he returned from his Egyptian campaign (with fewer spoils than anticipated). The extravagance! The debt! And the design of the garden!

Instead of traditional French formal, Josephine had adopted newfangled English romantic: exotic shrubs and trees, winding paths, a small lake for boating, waterfalls, statues and follies, and a Temple of Love with columns from destroyed churches. 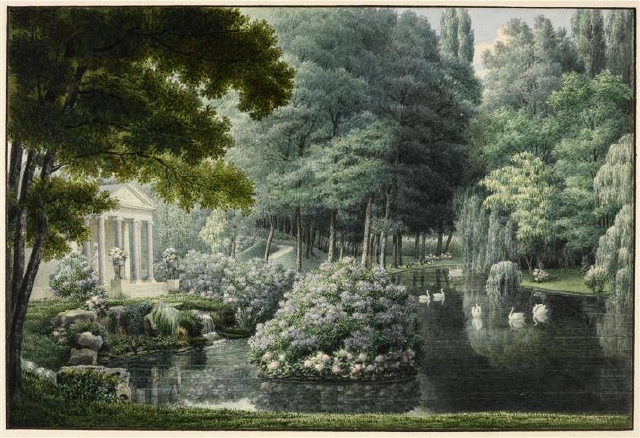 The Temple of Love surrounded by rhododendrons naturalized for the first time in France.  Auguste Simon Garneray 1812

Not a trace of formal beds and terracing in this playground of naturalism. Des niaiseries Napoleon complained –foolishness, silliness, inanities.

(Brief Digression: While in Egypt, Napoleon sent love letters, a red cashmere shawl, and plants and seeds to Josephine. She planted mignonette seeds and adored the heady fragrance of the flowers. Soon all France was growing mignonette.)

Napoleon did not expect to come home to this travesty of garden design. 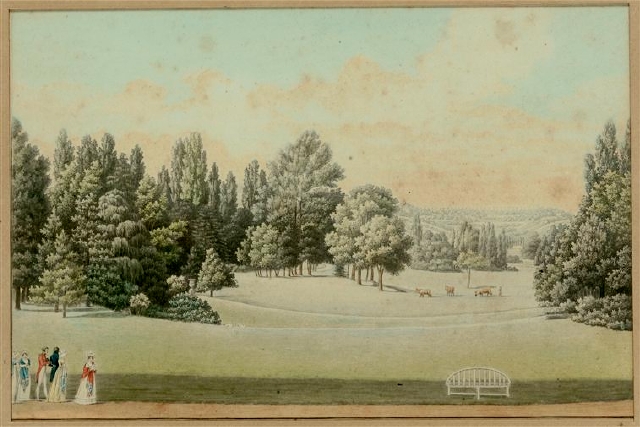 Oh, the tiffs and the tears. To make amends, Josephine turned one corner of her garden into classic French design with a working drawbridge. Here Napoleon, mollified, could withdraw in peace.

By the time Napoleon became Emperor of France in 1804, Josephine (his coined name for her) had a reputation as an extraordinary horticulturist and a canny trader of plants. Now, as Empress, she would command even greater deference. 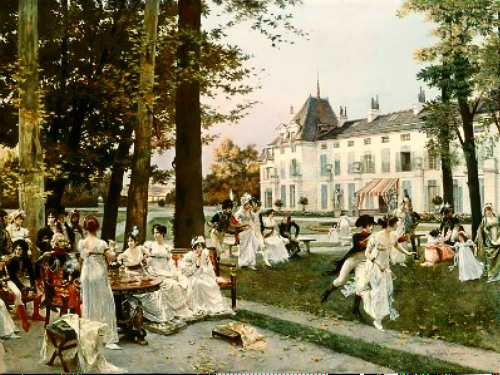 Whatever objections Napoleon may have had over Josephine’s single-minded — and extravagant — design for Malmaison, he apparently came round. He arranged for the garden to be enlarged from about 150 acres to 700 and was generous with financial support. From 1800 to 1802 Malmaison became his headquarters.

Salons for entertaining were incorporated into the glass house. Here, among pots of exotics, the royal duo entertained artists, scientists, and foreign dignitaries. Never mind that visitors were probably not gardeners. A charismatic Josephine treated them to detailed botanical lectures on her latest acquisitions. 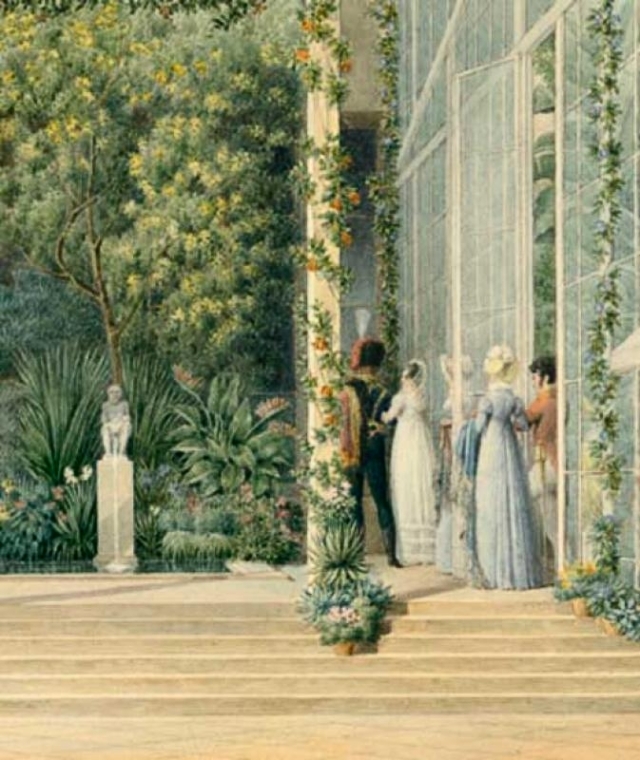 There was a reward for patient listening. Visitors were served sumptuous dinners on lavish gold place settings, many decorated with botanical motifs (booty from occupied Berlin).

(Interesting Tidbit: Josephine was among the first to grow plants in pots, or boxes, which were moved from greenhouse to garden when they matured. Planting in pots became trendy and spawned countless how-to lectures and books by newly minted authorities.)

In a letter written the year of her coronation, Josephine wrote that her collecting inspired bonheur inexprimable. (Spoken like a true gardener, but this particular gardener wonders how inexprimable her bonheur would have been if she had to personally plant all that she collected.) 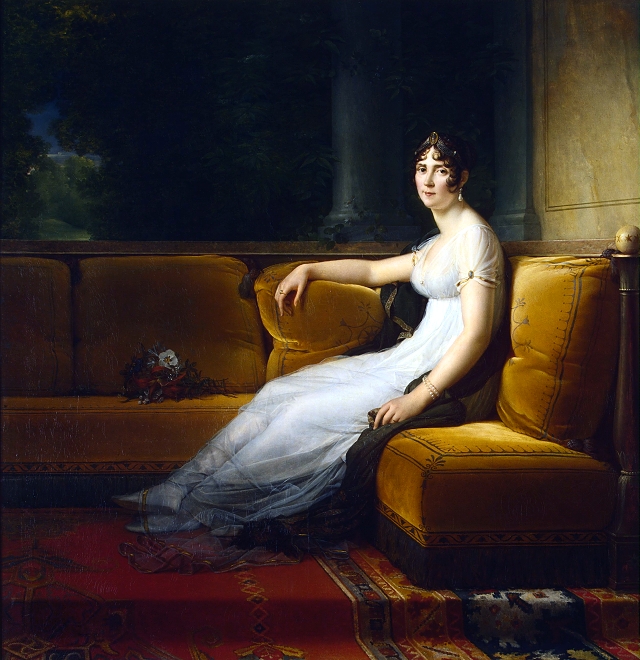 Josephine at leisure in a salon adjoining the glass house. Francois Gerard 1801

Of 2000 imports, 200 plants flowered for the first time at Malmaison, familiars like the tree peony, magnolia, rhododendron, hibiscus, phlox, dahlia and camellia. Later inventories listed many thousands of plants. 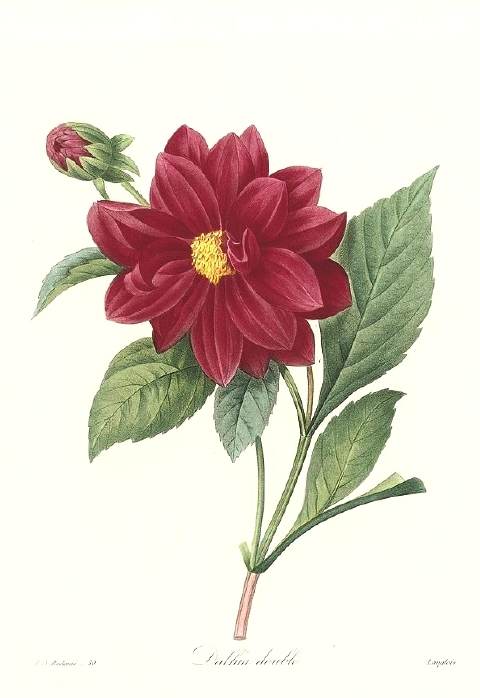 Thousands of species came to France from one important expedition to Australia, or New Holland, as it was called then. Among them are eucalyptus, mimosa, acacia, myrtles, and phormium, known as the linen of New Zealand. Professors who sponsored the journey were ex[ected to give Josephine first choice of plants. She underwrote costs for the first edition of the Atlas of plants, and Malmaison was featured on the Frontispiece of the second edition.

From Africa came ceanothus, ixia, bottlebrush, an astounding collection of heaths, and pelargoniums. She favored the zonal geraniums that brighten our summer gardens, and so did the rest of Europe. Today, these brilliant blooms spill over window boxes in Europe’s towns and cities, testament to that adventurous age of exploration.

Though France and England bickered for years, nursery shipments to Josephine from England slipped smoothly through blockades by orders of the British Admiralty. In fact, she once had a running tab of thousands of pounds (counting some arrears, maybe?) with the nursery of Messrs. Lee and Kennedy, who had direct ties with botanists in China. Through them came the first Rosa odorata Europe had seen.

(A Promise Sealed: Josephine wore violets at her wedding, and early on she won a promise from Napoleon to bring her violets every anniversary. He apparently never forgot, even searching them out during one particularly cold March after servants had failed to find any.)

But roses were Josephine’s passion. She wanted all 250 known varieties. When that did not satisfy, her gardeners and nurserymen propagated new varieties, till there were about 500 in all. 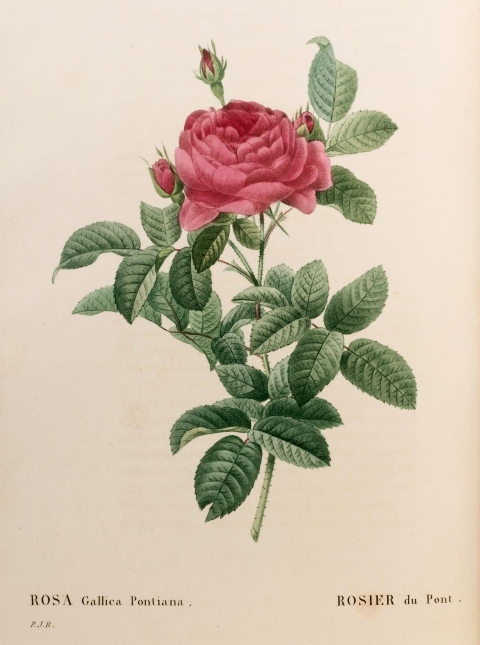 Curiously, the rose most associated with her garden, the very fragrant Souvenir de la Malmaison was only introduced decades after her death. You can still find it today. 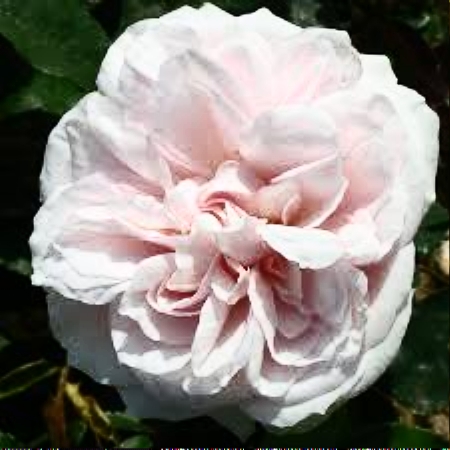 Josephine died of diphtheria/pneumonia in 1814 while Napoleon was imprisoned at Elba. Though Napoleon had divorced her and remarried because there were no heirs from the marriage, he returned to Malmaison for a year after his escape from Elba.

Empress Josephine, wearing the shawl given to her by Napoleon, in a romanticized Malmaison setting. Painting finished in 1809, five years before her death. Pierre Paul Prud’hon

The bones of the garden eventually passed into oblivion. (The chateau, however, is preserved as a historic site and welcomes visitors for tours.)

The formal entry to Malmaison today. Photo by Pelio Faber

But the spirit of Malmaison lives on in the exquisitely illustrated portfolios that Josephine commissioned of plants in her gardens. Two volumes of botanical paintings record this heyday of collecting plants, naturalizing them, and propagating them for gardeners around the world. One of these is Les Lilacees which features many plants familiar to us today. 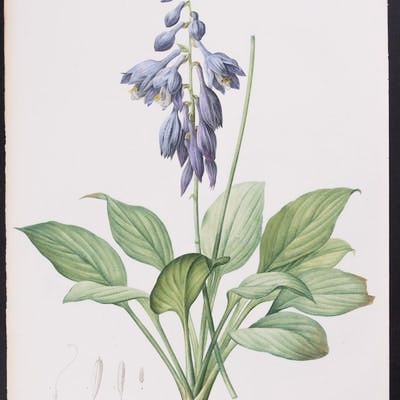 Of all plant portraits, the most loved are Pierre Joseph Redoute’s renderings of Josephine’s roses that appear in Les Roses. They are revered today as examples of the finest botanical artwork, so outstanding that Redoute is called the Raphael of Roses for his combination of artistry and attention to scientific detail.

Often these images are simply called The Redoute Rose. But they grew in Josephine’s garden first.

3 Responses to Empress Josephine: Plantaholic for the Ages