A Tale of Hellebores in Two Gardens

Dazzle and Disappointment, Inheritance and Intuition

A dazzle of hellebores, also known as lenten roses. Can you find duplicates? Photo by Susan

Imagine this dazzle growing in one garden. Yup, just one garden: Susan’s Zone 5 garden on a rocky hillside in New Hampshire. Appropriately, she’s floated these beauties in a heart-shaped glass bowl — because don’t we all love hellebores! Commonly called lenten rose because of when they bloom, these hardy pioneers clear away the last tired patches of winter. 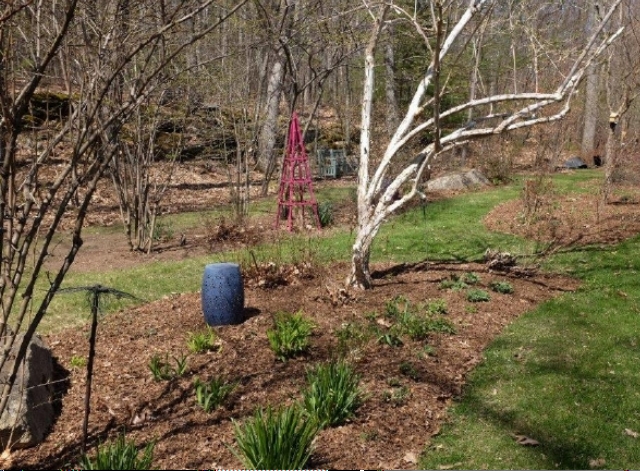 Now, New Hampshire is well known for a spring season that takes forever to show up. Less well known is its reliable Fifth Season, usually around March-April — a dreary intermission between glorious calendar-photo snowscapes and glorious spring color. The locals call it Mud Season.

A patch of bloodroot breaks bare ground, along with other hopefuls near a vibrant yellow display. Photo by Susan

A closer look at bloodroot, an early-spring New England favorite, as it breaks bare ground. Photo by Susan

Another taste of spring? Photo by Susan

When do hellebores bloom in New Hampshire? You guessed it. Mud Season, when the weather is at its, well, dreariest. Perhaps that Mud-Season ambiance was what impelled Susan to look for a dash of cheer from hellebores. Several years ago she scoured nurseries for the new and elusive.

A high point of color in Mud Season will give way to spring perennials in May. Photo by Susan

Masses of sunbeams in Mud Season. Photo by Susan

North Carolina nurseries were high on the list, specifically Big Bloomers in Sanford. One bright day in late autumn we steamrolled through multiple greenhouses. There we found nuggets of promise in small pots at small prices. She couldn’t leave any behind, so she took one of each variety, many shown here. I got to keep them alive during our relatively benign winter – and incidentally watch them open their first blooms.

Looks like froggie is happy to hug a leaf from the bouquet behind him. Photo by Susan

Massed against a sunny wall. Photo by Susan

Was I envious that my foster plants would eventually go flying north?

An iridescent purple hellebore brightens a bed that in two months will be thick with perennials. Photo by Susan

Not at all! Our garden was still recovering from Hurricane Isabel ’03, and most of our hellebores had skittered off after the trauma. I was not yet ready to purchase replacements. I bought a Japanese snowball bush instead. . .

. . .And waited patiently for a new crop of hellebores to appear. Unlike the dazzle pictured above, our blooms, when they finally arrived, had a range of soft mauves and rosies, with exquisite freckles on faces forever bowing.

When they arrived, I chose the best colors and planted them in masses. Stirred from sleep by late winter sunbeams, they would nod in still-chilly breezes, coaxing me to get the camera out each spring to capture their joyful return. 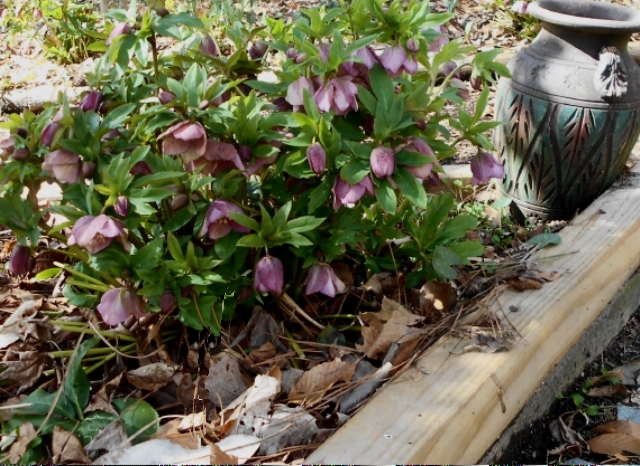 My prize plants seeded abundantly. With good potting soil and a sprinkle of fertilizer now and then, the seedlings that I pricked out would mature into handsome plants in a couple of years. We began to offer them for sale at garden shows.

One year we had so many they became decorative accents at a Master Gardener flower show, and everyone had to have one.

For a few years we had success with hellebore niger, the lovely white Christmas rose that blooms earlier than the lenten rose.

Lately, though, I’ve come aware of changes I hadn’t picked up over the years. I must confess that after I greet these reliable old friends with a smile each spring, and they nod greetings from comfortably crowded beds, garden chores consume me, and my vision tunnels.

These are old friends, after all. Or are they? Today, many of those subtle mauves and rosies that I had taken for granted are gone. What happened? 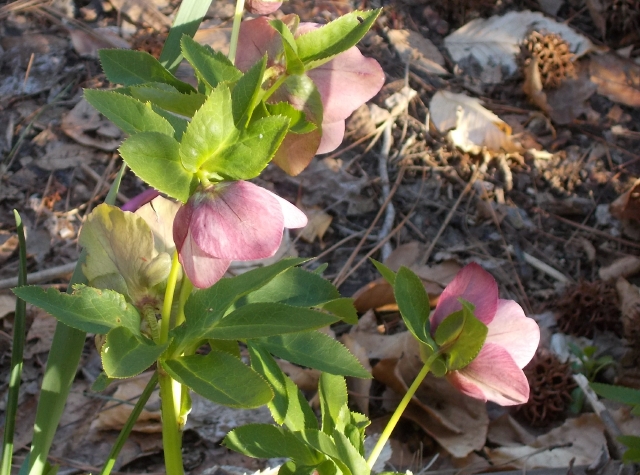 I began to suspect a pattern. Over the years, scattered solo plants would grow splendidly, then drop out, leaving a big hole in the landscape. Why? They’d all been given standard hellebore treatment: a modest amount of sun and velvet compost, and occasional sprinklings of 10-10-10 fertilizer in January when they began growing. (Not necessary, but it does give a nice boost to the plants.) 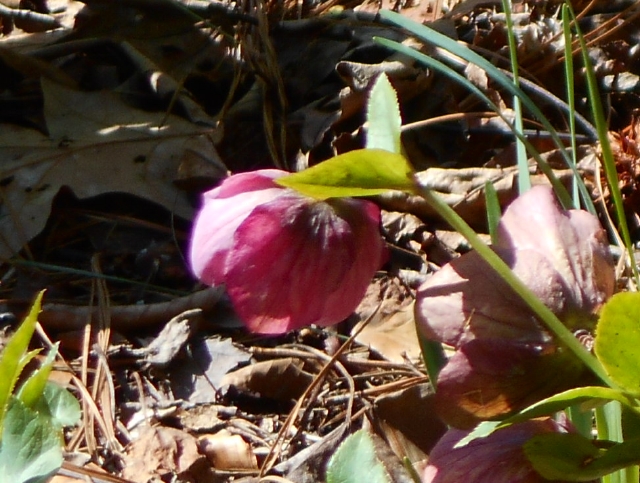 Hellebores are usually carefree and long-lived. Apparently not mine. I have not yet mentioned one key element in the equation: good drainage. Pottery clay cradles our garden. The water table is a scant 18 inches or less below the surface. Raised beds help, but they are not always the answer. 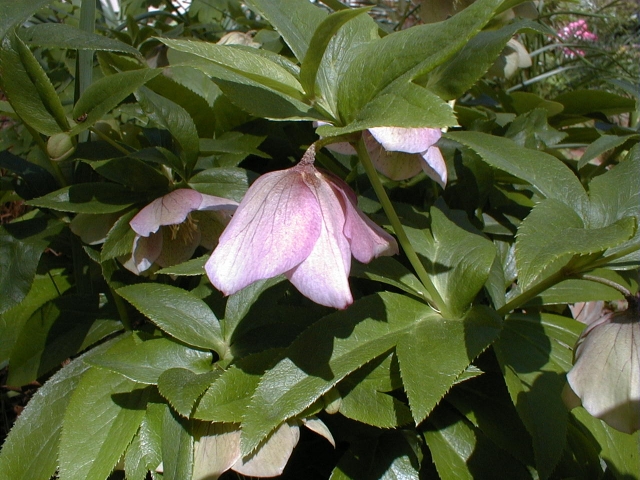 Young plants greedy for nutrients and water will send out roots and thrive. But larger root systems of older plants can’t always find purchase in soils that are swamped during rainy spells or wet winters. Root-rot or stem-rot can set in and plants give up.

It’s a pattern we now recognize and even expect to occur in certain varieties of shrubs. Prunus (cherries) and weigela, for example, grow into lovely plants and then one day they are leafless. 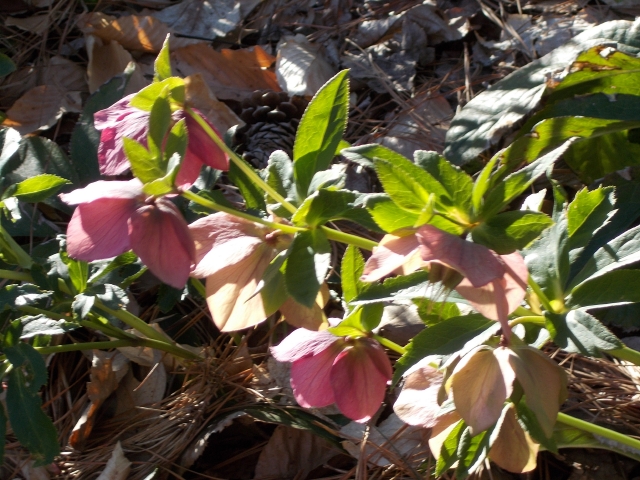 In crowded beds a small patch of dead leaves does not warrant full-up inspection, so it was a while before I cottoned to this revolving door of hellebores. Mature plants survive for a few years, then cede the land to their offspring.

Here’s the rub. The offspring are disappointing. They are not as pretty as my chosen favorites. I suspect that those basic laws of inheritance about dominant and recessive genes are playing out in my garden. Over time, dominant genes tend to produce survivors with tame blooms.

Still, they are welcome each spring, and I will always thank my first hellebore for opening my eyes to a guiding principle in gardening. As a gullible neophyte, when I purchased a picture-perfect hellebore with spectacular blooms, guiding principles were nowhere in my thinking.

It was picture-perfect the second year, too. But the expert-in-the-book said to cut out the leaves in spring. Tough and glossy the leaves looked. Healthy. But I’d heard that hellebores were persnickety. If I didn’t follow directions, maybe my plant would die. So I cut. And it died. 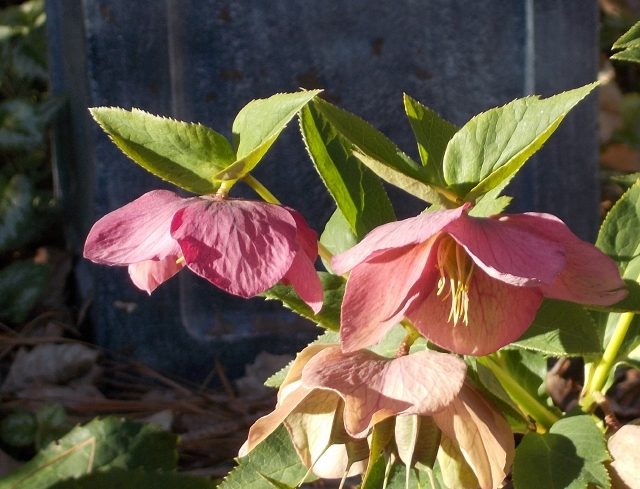 That was when I learned that I should trust my own instincts and my own observation, that knowledge should be tempered by plain old common sense. I can’t say for sure that my pruning killed the plant. But from that time on, my judgment calls were based on my gardener’s intuition, an unexpected gift from my first hellebore.

2 Responses to A Tale of Hellebores in Two Gardens