Posted on February 24, 2020 by aheronsgarden

Three decades of my memories are seamed to the garden with a lock stitch that cannot unravel. The quiet months, January and February, when the green world seems asleep, often draw me back to those first years, when I was fresh and curious and eager.

I collected spectacular (to me) trophies with a sense of adventure and the zeal of a religious convert, haphazardly, from anywhere – weedy fields, abandoned gardens, rural mom-and-pop roadside offerings.

Rose’s Department Store and the old K Mart had interesting plants, too, for practically pennies. Plants-by-mail were cheap, postage nickels and dimes. As we explored the coast, from Florida to Maine, I inveigled plants from specialty nurseries, motel managers, garden caretakers.

Image from an old glossy photo. This was not a smart stop on a windy road, but I got my prize, cuttings from an old-time deutzia. Wicked candid by Mike

Verges along country roads gave up some gems, too. The challenge was in the chase.

That was when plants were allowed to have personality; they grew however they chose to grow. Once armies of modern nurseries brainwashed plants with chemicals to demand bug-free uniform growth and put them in fancy pots with printed logos and charged a lot of money for them, plant collecting lost much of its allure. But those happy early days had hooked me and laid down the warp and woof of my memories.

This granddaddy pine stood above the garden for years, witnessing my floundering, but after six or seven decades, buffeted by storm and weakened by bark beetles, it became another memory

Well, many of my trophies perished along the way. But many lived on, too. For a long while I believed I was the guiding light in the process. Chastened by experience, my focus – and my memories — broadened from plant collecting to looking, really looking at my garden, absorbing the joys and disappointments as they came along.

Not a memory — yet. This fragile gazing globe, gift from daughter Ellen, has so far survived my clumsy efforts to protect it from wind and weather. It was part of our original fairyland

On a grand scale I rejoiced in a fairyland of dancing lights and shadows on summer afternoons when the sun came in from the west. Then sadly we cleaned up the messes when storms struck down the fairyland.

On smaller scale, I took delight in blossoms lit by stray sunbeams that tarried after sunset. These picture memories taught me about how fragile the beauty of a garden is. How impermanent over time.

Azaleas, spirea, crabapple in the soft light of spring frame our favorite elf who traveled with us from England twenty years ago. The crabapple, broken by storm, is a memory today.

I discovered that coyote, bobcat, beaver and otter were temporary wayfarers. (Was this garden a safe zone for them? For me?) I can’t forget my close encounters with the animals, large and small, that passed through the garden, and I still wonder about how they survive from day to day in this small world of change.

As I uncovered new (to me) secrets of plants and soil, I learned more about the ways of life in the garden and my memories grew richer as years passed.

Wisps of snow on a fall-blooming ‘Yuletide’ camellia. The plant is one of Bob’s air layers and this photo comes to us from friends who are enjoying its bloom in their garden.

Favorite plants bring good friends to mind. Storms create war zones that leave scars that don’t fade. But rainy winters and scorching summers, bubbling springtimes and wrinkled autumns, they are the dependable rhythms that give anchor to the garden. (As do the ever-so-dependable weeds.)

That said, I hope you can glimpse some fragments of my garden memories from these few photos. They tell a story of contentment and loss, beauty and friendship, youth and old age, surprise and change. A tempering by time that is much more satisfying than my original rows of trophies. 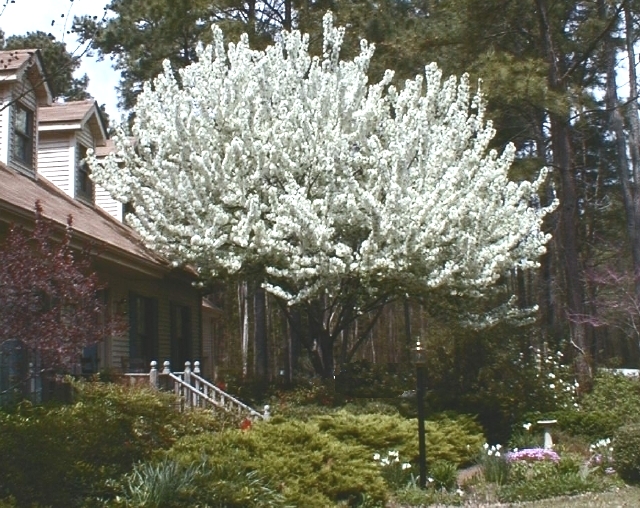 Our Norman Rockwell crabapple sheltered robins’ nests in spring and fed berries to squirrels and birds in fall. It never quite recovered from sacrificial injuries endured when it held back the pines that fell against the house during Hurricane Isabel. Out of gratitude for the weakened and broken but still-blooming tree, we withheld the axe for many years until it inevitably declined.

Last monarch butterfly of the year, late about her rounds. She hovered here for two weeks one November, clinging to, sipping from, the long, tubular flowers of pineapple sage, sharing small pools of nectar with honeybees and sulfurs. The riot of untamed sage succumbed to wet seasons, so we shall never see a repeat performance. 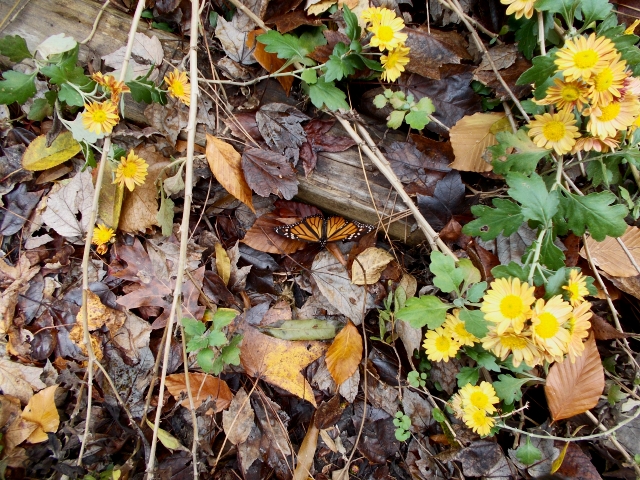 Was she cast among detritus as the year waned?

Before the pines fell and the fairyland was gone, there was shade in our backyard, and hydrangeas cascaded with hostas down to the dock. 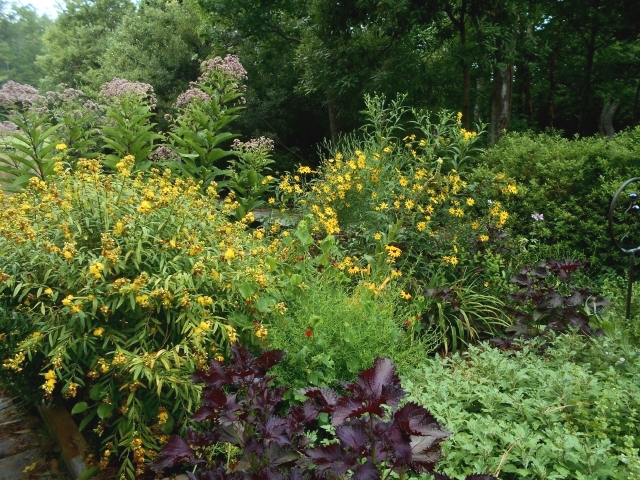 Our last plant sale. We ran it annually for more than a decade to support environmental causes, and it was a grand excuse for meeting new gardeners and old friends. . .

. . .and for gathering later under the gazebo for a pot luck feast and good fun—even in the rain.

There’s always a frog or two in the pond. This particular visitor usually hid under a lily pad, silent until he heard us chatting during lunch break in the gazebo. Then, he’d harrumph his two cents in a loud bass fiddle. When we stopped talking, he quit croaking. Laugh if you will, but we had a connection with this croaker beneath the waterlily.

Grandpa and Tom drag the remains of two dwarf Burford hollies, sentinels by the front door, into our woodland brush pile. Even with repeated pruning into lollipops (I guess you’d call that topiary), they threatened to swallow the house.

Master Gardeners visit in the rain. They’re hardy fellows. But wait, half the group has disappeared. To drier terrain under the gazebo no doubt.

Chrysanthemum ‘Sheffield’ began life in our garden as a single-stemmed stowaway hidden among thorns on an old rose bush from a friend’s garden. Rambling and rambunctious, it brightens our November gardens and is an oasis for last-minute insect visitors. 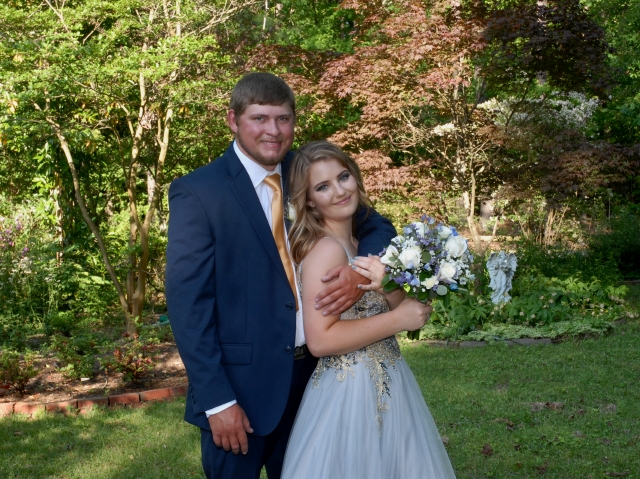 Prom night for high school seniors ready to take on the world, but first a photo session in our garden with a professional photographer.

My favorite memory of all. Master Digger Bob working in the garden to make it grand.