The True Strange Tale of an Unlucky Rabbit

Posted on November 11, 2019 by aheronsgarden

In Which We Meet Rabbit

One fine summer morning we opened the door to find a wild rabbit sitting on our front porch. Might I come in? he seemed to ask, nosing the interior the way rabbits nose, but very politely. We chatted in a friendly sort of rabbit-jabber. We assumed he was looking for something to eat, though we would later learn this was not the case. He listened with the patience of a rabbit. 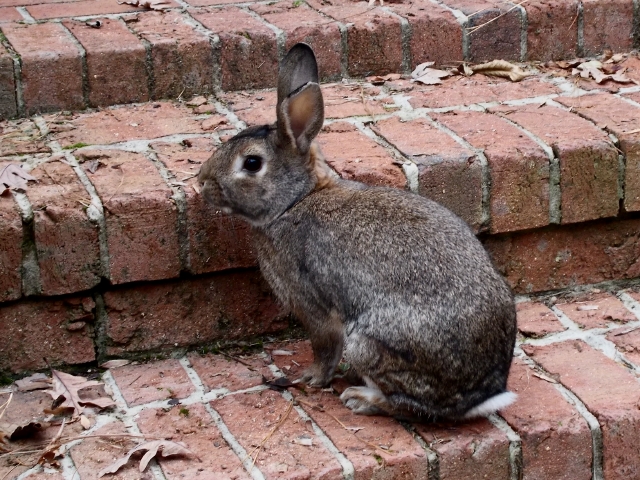 Rabbit would become a regular on our front steps

Where had he come from? Had somebody raised him? Had he stepped out of a rabbit hole? We did not want to be rude, but we are not in the habit of drinking tea with rabbits, nor have we ever invited any into the house.

Now this is something to think about

So, rather inhospitably, I’m afraid – although he was still most polite and did not try to venture inside – we took turns standing guard while one or the other of us hunted up some carrots. Since they were small, we brought out a few and laid them on bricks.

Where had this rabbit been all his life? He attacked a second with more proficiency, having decided, perhaps, that it was tasty and potionless. A third carrot he carried off. He had had enough of us.

He was handsome, that Rabbit, larger than the wild rabbits that grow up (or don’t get to grow up) in our garden. His fur was luxurious and smooth, and it covered thick folds of skin that begged to be petted.

We did not, out of respect for his semi-wildness, but mostly because he wouldn’t let us. Considering his size, we assumed he would need to eat a lot, but then again, he looked more like a sitter than a bounder.

Definitely a sitter, he would watch patiently while I potted plants

During the next few weeks, we would see him lounging on the front lawn. If we were working outside, Rabbit would silently appear and sit next to us. Once I felt something brush the back of my leg, and there he was, trusting that I would not step on him. Wheelbarrows and rakes did not bother him.

As weeks passed, Rabbit would bound over to us when we came out of the house, as though he had been waiting for us, and there was joy in his bounding. He did not come to beg. He seemed to want to be near us.

But we are softies, so we made a beggar out of him. We liked him as much as he liked us. So we brought out the carrots when he came round.

He seemed to especially savor apples because he would race away with the prize if you gave him one. Well, more like hopping than racing, but we could see determination in his step.

Maybe, under certain circumstances, even Rabbit could win a race with Tortoise. When Rabbit got tired of us, he slipped under the shed, his midriff and hindquarters stretching and thinning, until he looked almost as skinny as Brer Rabbit. 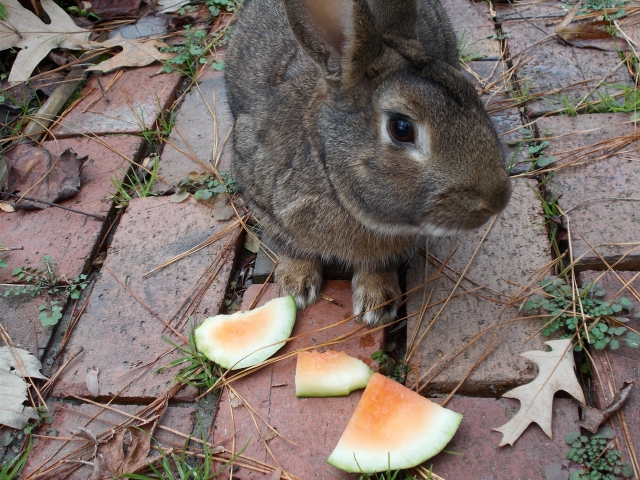 Now, here’s the riddle. Rabbit always appeared gentrified: well fed, well groomed, unruffled. Didn’t much care about eating.  In fact, he didn’t seem to know how or what to eat in our garden. He might browse a dead twig or a dead leaf before he dropped the dry stuff in distaste.

Once he tried a fern. Unpalatable. He’d nibble a weed here and there, or lackadaisically chew a crispy stalk hanging over a walk. 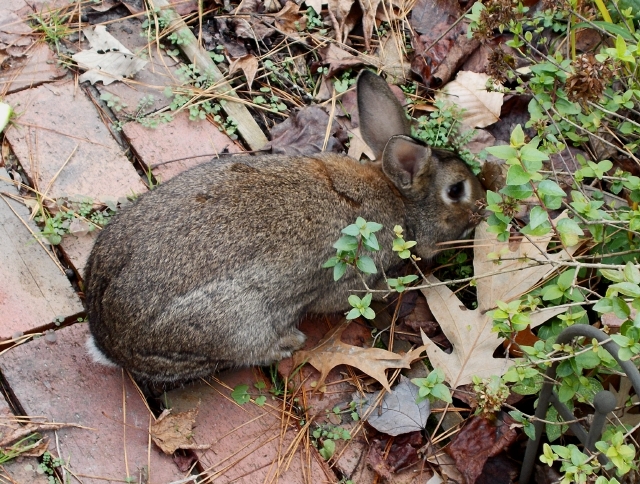 What’s so interesting among the weeds?

Or he’d dig in rocks. Rocks? He ignored the usual deer and rabbit fare: azaleas, hydrangeas and droopy but still juicy hostas. Which was fine with us.

In Which Glimpse Little Rabbit

From early fall on, we watched another, quite different rabbit. He must have been the only one left from a late litter. He was always alone. Scrawny, small, and alone.

We didn’t see how he could make it, but each time we saw him, he looked bigger and stronger. He was another with a strange diet. The only damage I found was heavily nibbled chrysanthemum leaves. The usual rabbit fare seemed untouched. Which was fine with us. 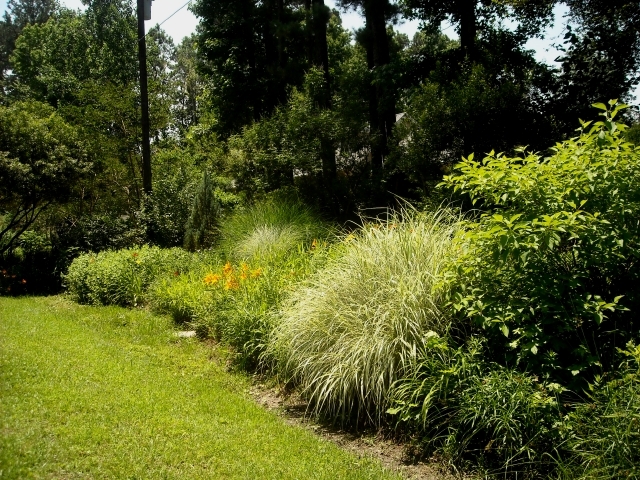 Little Rabbit never stayed long enough to have his picture taken, but here are some places where he would not spend time (the lawn) and where he might like to hide

Little Rabbit was growing up lean and smart. He was, as they say, a survivor. We never saw him on the lawn, though that has always been a favorite browsing spot for rabbits.

He had retreats throughout the garden, thickets of shrubs where he could hide safely. When he ventured out in the open, he didn’t linger. He dashed. Little Rabbit would definitely win a race with Tortoise, except you wouldn’t know it because he’d always be under cover. 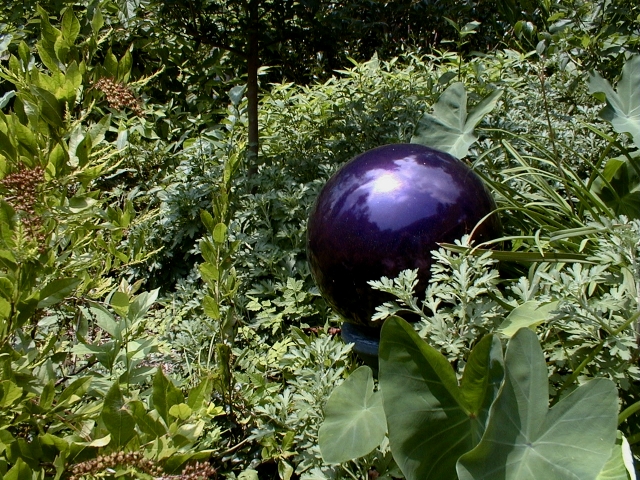 I would talk to Rabbit about Little Rabbit. I would tell him he should not hang about on paths and lawns out in the open in full view of predators. He should hide in thickets more often. And he should not be so friendly with people. He was simply too trusting. He should act more like Little Rabbit, who skedaddled as soon as he saw us.

Rabbit did not appear to care about my rabbit-jabber. He was, however, intrigued by Little Rabbit, who had never taken much notice of Rabbit.

One day Rabbit got up enough steam to lope after him, but Little Rabbit was having none of that and dashed, with dignity, I might add, into one of those thickets he frequented. He was a rabbit who knew how to take care of himself. Rabbit seemed to accept the rejection and came back to listen to more rabbit-jabber. 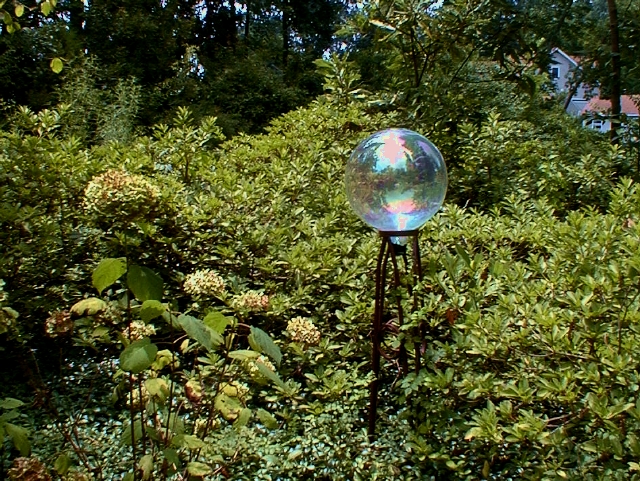 Side Yard Hideout for Little Rabbit

When I use the word “thicket,” I mean “thicket.” Leaf to leaf, branch to branch, thorn by thorn, our groupings of shrubs are packed: large hydrangeas, roses, azaleas, camellias, viburnum, forsythia, wax myrtle, and loropetalum, for instance. Perfect havens for rabbits when they tire of sunshine and lawn and seek a cozy nook away from predators. Even Rabbit used them once in a while. But not as often as I thought he should.

Back Yard Hideout for Little Rabbit

Visitor to our home that Thanksgiving spent several minutes filming Rabbit while he ate carrots. We stood in a circle around him, gawking, as though carrot-eating were the equivalent of hang-gliding off a cliff. Another day, he participated in Facetime with our grandson, though his reticence was hardly conducive to animated conversation.

In Which there is a Commotion

It was not quite winter when it happened. We heard thrashing in a thicket. No other noises, just thrashing. We waited. A hawk half-limped, half-crawled out from under the brush. Ruffled and roughed up he was, and his wings were crimped and dragging. We thought he’d been in some sort of battle and had broken a wing.

Once out in the open, Hawk, probably a juvenile red-shouldered, managed to straighten up to his full size and stretch his wings and smooth his feathers. His magnificent wing span blocked full view of his head, but everything looked to be in good working order.

Yet when Hawk tried to take off, he seemed rooted to the ground. Hawk tried a second time. Still landlocked. Again, he tried but stalled. Had something gone wrong with balance, or navigation? Was there some internal damage we couldn’t fathom?

At last, Hawk took off and flew. We discovered the reason for the commotion in the thicket and his aborted attempts to fly. In his beak he had been clutching prey he could not manage. Once he gave up his quarry, shed those extra pounds, he could lift off with that majesty so characteristic of hawks.

We ran to the dropped prey. Maybe there was yet some life left, but it was too late. We recognized that lifeless body, oh, we recognized it.

It was smart, fleet  Little Rabbit who did all things as they should be done and had been deeply hidden in the thicket. In a twist of fate, he had the misfortune to be felled by a young hawk of the year, still learning how to target his quarry and not understanding the limitations of the hunt.

Diving into tangled bramble to catch prey that he could not hang onto was not a path to success. Hawk no doubt learned from this encounter, but smart, fleet Little Rabbit paid dearly for that lesson, and we will miss him.

We laid Little Rabbit in a depression in the woods and lightly covered him. Next day he was gone. Wild ways are unseen but efficient.

In Which We Learn More About Rabbit

A few months later, a neighbor stopped by and asked us how we liked his rabbit. He had seen him on our lawn, he said. He and his wife, a teacher, had raised three youngsters in the spring, two males and one female, who had the run of their fenced property. They would feed them apples left from school lunches. Aha! So many questions answered in a simple conversation.

But three’s a crowd. The male and female mated and Rabbit was chased out. Maybe he came visiting because he felt first-rate with us, We were usually around. We always welcomed him, never chased him, and that is why he greeted us so happily.

In case you are wondering, Hawk isn’t the only one who learned a lesson. Soon after the incident, Rabbit changed. Or maybe he simply grew old and wise. He took to being skittish, even with us. He avoided the front lawn and wide paths. He stayed mostly hidden. He came and went quickly. He no longer cared for rabbit-jabber. 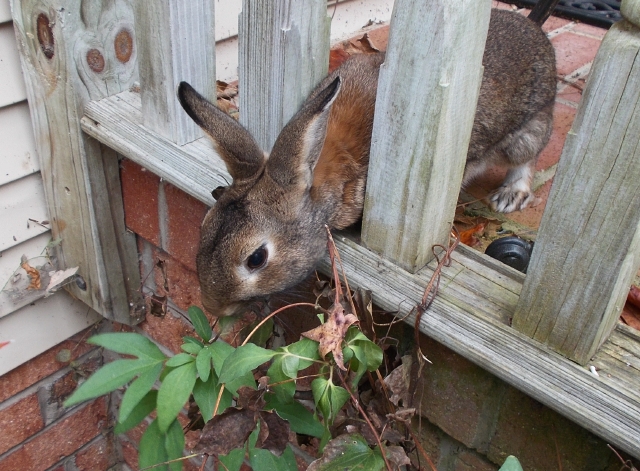 Hard or a hawk to get to him here

Occasionally he would climb the porch steps to chew winter-purple leaves off clematis tendrilled around a post. But he took care to stay hunkered down.

Sometimes he’d nose around, especially if it was cold. Hoping to be invited in? But we don’t drink tea with rabbits.

We don’t see him any more.

But we have our memories and our pictures

This entry was posted in rabbits, Uncategorized and tagged Rabbits in the Garden. Bookmark the permalink.

2 Responses to The True Strange Tale of an Unlucky Rabbit