The Winter of Three Degrees Part II of III

Raiders of the Winter Garden

Yup, that’s what they are. Come out in the cold to sample Green Plate Specials and hunker down for the winter as if they owned the place. Ah, those plants with tender leaves, hors d’oeuvres with a tang served up by Kurume and Gumpo azaleas, delicacies prized by these raiders of the garden.

A spikey azalea beginning to recover

The damage was considerable. In fact, it was so considerable that I took pictures, which now seem to be missing, probably because a plant that has been eaten tends to become invisible, which tends to hamper positive identification. So, take it on trust, there were a lot of photos that simply showed tangle.

On the bright side, these same plants were spared the misery of a long cold winter.

This Gumpo went brown in March. We held our breaths, as did everyone in our area as azaleas browned out

Spoiler alert: As of this writing, only one plant that we know of was totally lost to browsing.

Still, chewing damage was so pervasive I assumed initially that it came from deer. But the diagonal cuts on branches were clean, missing the ragged, torn edges indicative of deer browse. Maybe deer and rabbits had negotiated a temporary treaty and deer went elsewhere for tender kibbles.

Now I can understand why Farmer MacGregor had a certain hostility to these cute, furry creatures

Tall rabbits were the how and why of these Phyllis Diller plants. Not that they (the rabbits) are genetically tall. They simply stretch themselves skinny as a dime so they can reach to unsurpassed heights, even to the tops of, say, deutzia gracilis.

Yes, rabbits like deutzia, especially tender new transplants still naïve about the ways of rabbit raiders. But I wonder why these rabbits were still stretching for deutzia and azaleas, when concessions of just-out hosta were offering grab-and-go meals almost everywhere in the garden. (Maybe a need for more fiber in the diet? Is there a fiber RDA for rabbits?)

This young deutzia ‘Chardonnay Pearls’ once eaten down by rabbits, was spared this year. They preferred the older shrub that only  laughed the rabbits off

In their defense, rabbits can be very polite diners. They take small, dainty bites, even when they are ripping a plant apart.

Like a dutiful, efficient, organized, first-things-first gardener (as I know you all are, too), I began to cut away the sticks to shape the bushes and make room for healthy new growth that had begun to sprout from below. 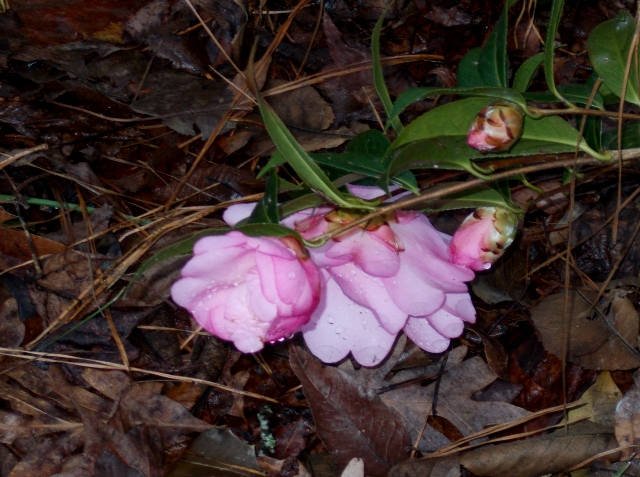 At least they ignored the camellias. Here the rain has pounded a bloom into the ground

Then I had an epiphany.  Had I been in some alcoholic haze? My diligent tidying was not deterring the raiders. Instead, it was inviting more rabbit raids. Come and get it, varmints, new bush opened up, easy pickins’, guaranteed no sticks, lots of tender new leaves on the plate, all in shiny bright neon.

Let me tell you, I sobered up fast. Now on high alert, driven by pure naked impulse, I designed high-tech azalea barricades using cut-down joepyeweed sticks, which just happened to be at hand.

I gambled on confusing the raiders by tucking broken stalks like spears into the stick bushes, which, by the way, were beginning to look pretty good, except that now they were even more sticky and would require more tending later in the season to remove the stick barricade that was now junking up the growing sticks. Do you think these barricades could ever be positive focal points?

And then suddenly the Gumpos turned green

Then again, maybe I had been too hasty. After I sprinkled “aromatic” Holly Tone on the azaleas to coax them along, the rabbits seemed to disappear. Spraying Liquid Fence would have been more sensible, but who was being sensible at this point. Next winter, I vowed, I’ll toss wads of pine straw among azalea branches and top them off with a garnish of Hollytone. Let’s see how you like pine straw in with your azalea leaves, you, you, you. . .rabbits!

Despite browsing, on the whole, azaleas weathered the winter with grace. Rabbits ignored the large-leaved southern indica and Rutherford hybrids even though they remained green all winter. May-blooming gumpos that the raiders missed were badly browned, but they have now pumped out new green leaves with energy that astonishes. Do I spot flower buds, too?

Kurume azalea ‘Coral Bells’, a reliably early bloomer, seen here in a protected corner, for the most part eluded rabbits and the deep freeze

Who has not lately complained about copious rain! (Which complaints will no doubt be replaced next summer with groans about terrible heat and extended “drought.”)

Have you noticed that the plants are not complaining? Ever opportunistic, they are sucking up a power drink of nutrients that would otherwise be locked in dry soil. And so we are being treated to a lovely, green world in April. 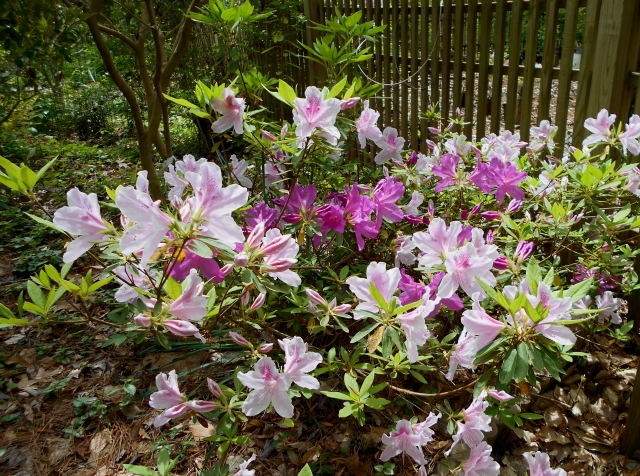 Possibly too green? This energetic growth is outstripping some of our azalea blooms, hiding them so the full “wow” effect of bright blossoms is subdued. Reminds me of why we gave up on Rhododendron catawbiense with its stunning lavender balls that cover walls of healthy shrubs in the cool-climate forests of western North Carolina.  Warm spring temperatures here confused their internal schedules and prompted plants to put out new leaves before the blooms arrived. That meant the “wow” effect was a dud.

Such a nitpicking curmudgeon you are! Can’t you just sit on a bench and enjoy the great wide World of Azaleas in April? Okay. Okay. I’ll set a spell.

(Note: Java Script must be enabled in order for readers to view slide shows that usually accompany our posts.)