With Sincerest Apologies to the Daffodils in my Garden

Posted on February 23, 2018 by aheronsgarden

Oh daffodils, sweet daffodils, my sweet sweet daffodils,
Wherefore art thou?
Fain wouldst I look upon your sunny countenance
Daily I seek your bright orbs reflected in mine own imperfect orbs
But if thine eye forever be cast down from me,
I fain accept my plight on bended knee,
Sworn by my love for thee,
Still begging thy kind forgiveness
For my unruly waywardness,
Henceforth I promise utmost fealty to my sunny lords.

Pretty corny faux-Shakespeare, eh. But they heard me! The daffodils are on the march! They weren’t a couple of days ago.

For years these ‘Ice Follies’ have peformed like champs, photo from 2010

There’s an ulterior motive for the bad verse. I’m trying to make up for my flagrantly careless treatment of the daffodils in my garden. You might say that I am easing guilt pangs with easy flattery.

No plant in my garden has been so reliable and so carefree and rewarded me with so much happiness than daffodils. And no plant have I treated with such disrespect.

Even shrouded by an old azalea browned out by our bitter winter, they’ll rise and bloom

In spring my guilt catches up with me and I begin to have doubts. Will they actually bloom this year? I ask myself. By the first of February I’m out feeling for telltale nubbins, or buds, deep down inside the just-emerged leaves. If I can’t find them, I am consumed with doubt and loss and guilt. (Well, maybe I’m being a little too melodramatic.) 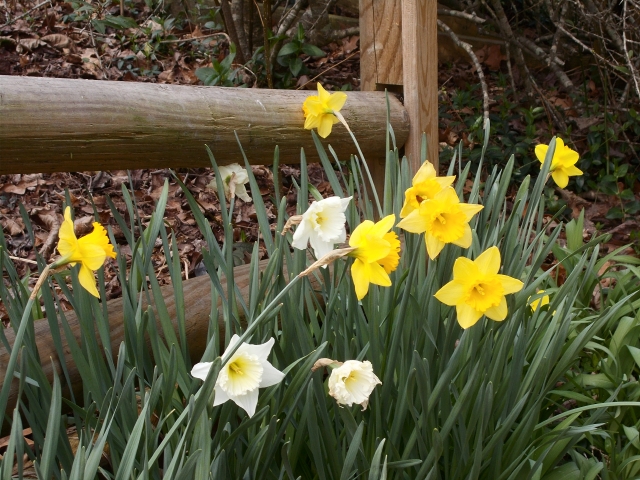 Lucky daffodils in other gardens get planted to proper depth in good soil with good drainage and a soupcon of fertilizer. They might even get watered during a dry fall. Not in my garden. The weather, not me, provides them with their needs: cold wet winters, dry summers for resting, and good sunshine during spring.

How I love my daffodil path!

What do I give my daffodils?

To begin with, I stuff them into holes small and shallow, only as deep as the trowel will go easily. Or I carve (chop) out a stingy hole in rooty soil with my trusty garden knife and coax (shove) them in.

They may be snug in their holes, but I’m sure there are air pockets around them. I count on a rainy day to complete the planting. For good measure I toss an extra helping of mulch on top of them and count that as part of the “planting depth.”

When faced with a big bag of daffodils, my idea is not necessarily to plant well but to plant fast. This gets me back on the couch quicker. I’m hoping to make the Guinness Book of World Records some day (for speedy bulb-planting, not speedy trips to the couch).

The view after Isabel, which arrived on September 18, 2003. Note the house across the canal, almost hidden

I really put my daffodils to the test after Hurricane Isabel. I planted them in dredge spoils. Unknown to us, part of our plot consisted of muck and mud, peat, and mounds of vegetation, some of it rotted, some not, that had been dug out of wetlands to create canals. We discovered the tangle after the hurricane flattened trees that had dared to start life in the murky stew.

It was an ankle-twisting dumping ground covered by a veneer of soil. But I was determined to pretty up the place after the fallen trees were cleared.

What could be better than daffodils! Why, they would even have full sun in spring and we would see sunlight in a moonscape. A bushel would make a statement, I thought. By mistake I ordered two. I had a mountain of bulbs to plant.

The “dredge-spoil” platform was cleared in late fall and the bulbs were planted in December and January. You can see the house across the canal more clearly now

The bulbs would be treated to precious little else besides bright sunshine. Gamely I worked my trowel in and around the debris, but some of the bulbs never had a chance.

Once in a while, my trowel slid down with no resistance, and I prided myself on planting a bulb properly.Then I saw the big fat bulb scoot right down into the pools of water that still lay underneath the dredge-spoil platform.

Next spring the ones that didn’t drown bloomed like champs. And they are still blooming, though not as prolifically, 15 years later, in a grown-up and shaded woodland.

I probably manage to plant ‘Tete a Tete’ properly, they are so tiny. They are another fine performer, and they wander, so they surprise us, too

How do they do it? I learned their secret from a bulb expert. No matter how deep we plant them, daffodils will manage. Too shallow? Year by year, new roots gradually “pull” the bulb down to a depth it likes.

Too deep? (My bulbs don’t have that problem; I’ve always felt six inches of depth was getting me too close to China.) As the bulb multiplies, its offsets will form closer to the soil surface.

Yahoo! I am the kid who got away with grabbing the forbidden cookies and didn’t get caught.

Daffodils across the front of our property are planted in fill that was thrown up when the road was built. It took five years for weeds to find a footing here. Occasionally, because they started life in squalor, these particular daffodils have had some 10-10-10 tossed on them as they came up in spring

As you have probably surmised, if I don’t plant well, I don’t amend or fertilize well. They go into mud and muck and the trowel gets stuck, and I curse my bad luck. Once or twice over the years I have fertilized them. I think.

I’ve read that fertilizing should be done in fall, so it’s on site in winter, when daffodils are putting out roots. But how in the world do you know where they are in fall? Should I be carrying a daffodil map in my head?

Nor do I dig daffodils when they get overcrowded and stop blooming. I just fuss at them. Sometimes I threaten them, but they are deaf.

To make an example once, I actually followed through on my threats. Did you know that there are a lot of bulbs in one of those clumps? More than you can imagine.

And you have to separate them and there are these little guys the size of your pinkie nail that you have to do something with.

I threw them in the woods. And guess what? It’s been about ten years or more, but a few are blooming today. 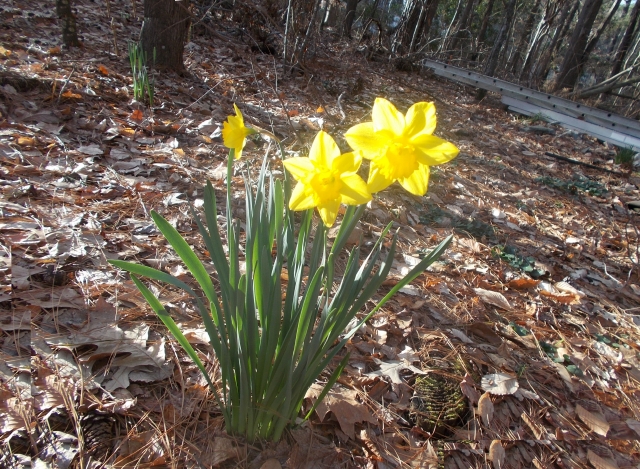 A clump from one of the cast-offs. Ladder in background is a giveaway. I would never plant daffodils near a ladder

Now what am I to do with the rest? I’m supposed to put them some place where they will stay dry. Will I remember where I put them? And remember to plant them next fall? And try to find a spot where no bulbs are already planted? (Which I can’t because I don’t have that map.) Fat chance of that.

So I never dig bulbs up if they don’t bloom. I look at slacker clumps and think they are handsome spots of fresh green popping up at the end of a cold winter and taking up weed-space.

A lovely ‘Ice Follies’ bloom, part of a clump that was moved but survived

Not of my own free will, but once in a while I have been known to dig up bunches of bulbs, always the biggest, healthiest bloomers. They are the unlucky ones that get caught in my frenzies of transplanting.

You may know the drill. You’ve purchased a fabulous plant, one with much more promise than any that you currently own, and you have just the spot for it. Trouble is, the spot is presently occupied by a happy, healthy plant, which has to be dug and, in all good conscience,  replanted elsewhere.

Of course, I am only speaking from other people’s experience, but it does seem I am always wanting to put a plant where bulbs are happy. To make matters worse, I sometimes, accidentally, chop a couple of bulbs as I’m digging.

Does a chopped up bulb ever grow back?

Well, no more finding pails and keeping them dry and forgetting about them and all that. I hunt around the garden with trowel in hand, right away, when I don’t need a map, till I find a bulbless spot. Now I can move on to other forgettable items.

Once I made a test case, and followed through on how those bulbs fared during the next couple of years. Do you know, they all bloomed! Though I don’t know about the chopped up ones.

The pot of bulbs and my trusty knife

Something must have distracted me this year. The other day, I found a three-gallon pot with bulbs planted in three inches of mud. When did I do that? And why did I do that?

I would never have remembered this particular pot because it was half covered by another pot that had found its way on top — except that the strappy leaves were growing every which way trying to find a way out. All 35 bulbs stuffed into one pot.

They were trying so hard, I couldn’t be a bad boy any more. So I gave them the same unruly planting treatment I give store-bought bulbs. They actually seemed to appreciate my efforts to get them out of the ghetto and into the country. Two of them look like they will bloom.

I have one more transgression to admit. After all the joy daffodils bring me, I get cross with them when they decide to check out and lay about like they own the garden, which, of course, they did a few weeks prior. 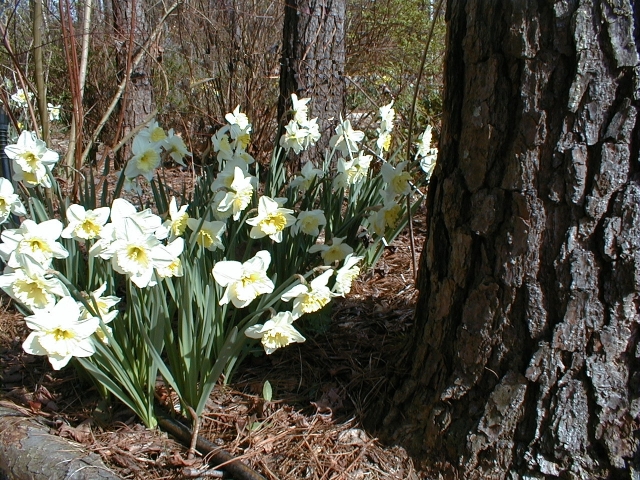 Clumps like these make me wish weather would stay cool for weeks. Once temps rise, daffs droop

Whoever said daffodils can hide behind daylilies? Mine are so rangy they smother the fresh-faced daylily clumps. Some people braid the leaves, but if I can’t plant ‘em right, I certainly can’t braid ‘em right. Anyway, I heard that braiding tears vessels that carry nutrients.

One year I decided to cut them all back before they got raggedy. I’d take my chances on next year’s bloom. I prided myself on being, as they say, pro-active, which I am usually not.

Was I bummed! The leaves regrew. I had twice as much work. Now I wait till I’m sure they’ve stopped growing and they look tired. By this time, how much good can they be doing for the plant? 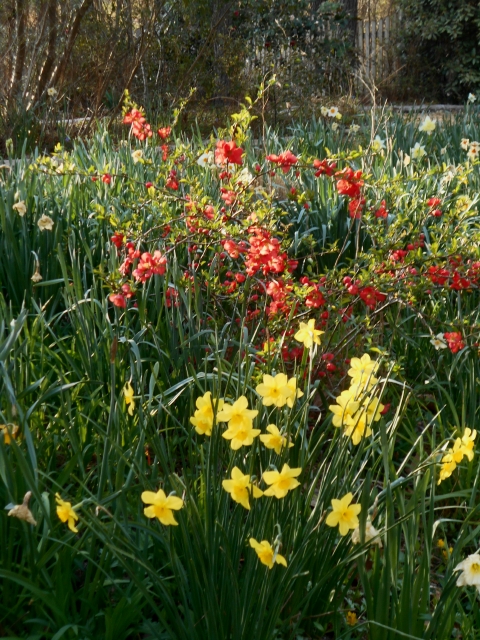 The best combination: red quince, yellow daffodils, and in the background a young forsythia that will rise in future years

Whose idea was it to plant so many daffodils anyway?

Ah well, memories fade. By late spring I’ll be missing them and by next fall I’ll be looking to buy more.

A year from now I’ll be writing more doggerel to coax them into bloom.

You know, I don’t think I have enough pictures of daffodils. I’m going out to take some right now. In the meantime, you might like a slide show of our daffodils and some of their companions. Most of the pictures in this post come from the last decade of growing in our garden.