How I Got to See the U.S. Botanic Garden

Posted on November 28, 2016 by aheronsgarden 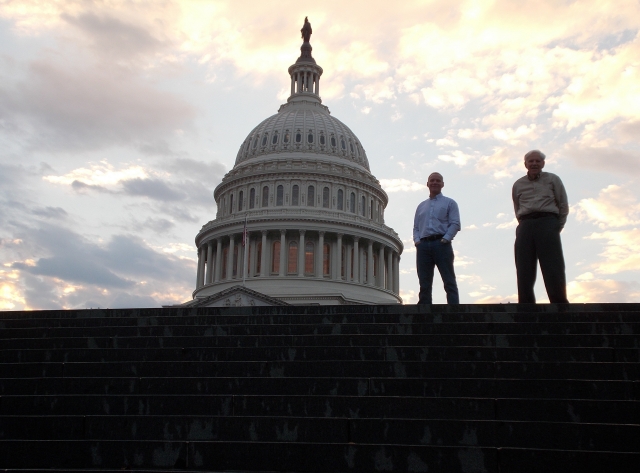 Steven, our pathfinder and Bob my partner-for-life on the steps of the U.S.Capitol Building under a dusky sky

If you are in Washington DC during the holiday season, spend some time at the U.S. Botanic Garden 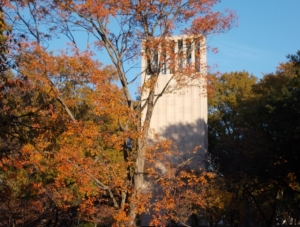 The capitol carillon bathed in fall colors on a sunny day

I had no intention of visiting the garden or even its conservatory during blustery November days when dry leaves were flying and limbs were cracking, but the unplanned excursion turned out to be a real treat.

We’d squandered our capital of balmy, clear-blue-sky days early on, sightseeing before the weather turned nasty. We’d lunched al fresco in the Sculpture Garden tucked between National Gallery and Natural History while ice skaters tooled in comfort around the pond-turned-ice-rink. 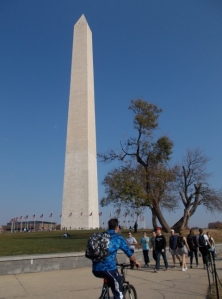 Moments before this shot, kids were climbing the gnarly tree

We’d taken tourist bus rides. We’d walked through Chinatown but refused to wait on lines for nearby Ford’s Theatre.

We wondered whether we should stop at the National Portrait Gallery, then decided to add it to our growing list for another visit.

Instead we chose to gawk at Trump’s remodeled Post Office.

Most especially we were overwhelmed by no end of history one could mine from artifacts and models and posters and photography on display at both the Newseum and the Capitol Visitor Center. Meccas for history buffs.

Monuments and memorials. Yes, we saw many of them. Palpable, deep-felt expressions reminding us of cataclysms in our country’s history. 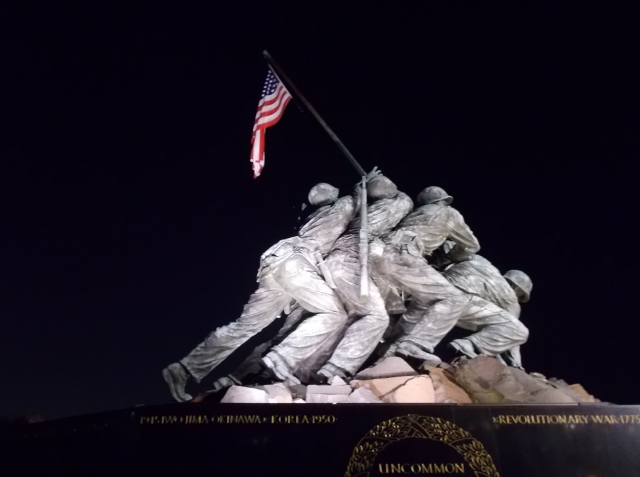 Statue based on the photograph of raising the flag at Iwo Jima. As you circle the monument the flag appears to change position

I was a child during World War II, and whenever we went to the movies, between the double features, we would watch a Movietone News report on the war, so the Franklin Delano Roosevelt Memorial held special meaning for me. 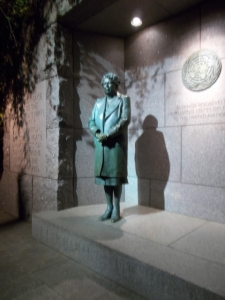 Not a single edifice, this memorial  takes you through a meandering series of outdoor rooms and gardens. You can reach out and touch the images sculpted in bronze, but you don’t because  you feel like you may be intruding on the life and presidency of this man. Cascades of waterfalls along the way symbolize the arc of the presidency and the struggles of the era.

The Martin Luther King Jr. Memorial, takes you through a passage between a pair of granite monoliths, “despair,” toward a single monolith, “hope,” which features a sculpture of the peaceseeker. It is based on King’s words, “Out of a mountain of despair, a stone of hope.” 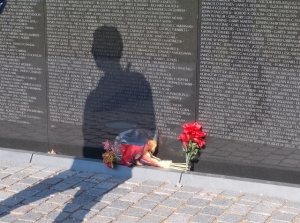 A small fragment of the vast wall

The stirring Vietnam Veterans Memorial of highly polished gabbro, a wall of names reflecting clear skies and shadow people is crowded with seekers of solace casting tokens of remembrance at its base.

Nearby is the bronze statue of Three Servicemen, black, brown, and white. They seem to embrace a spirit of brotherhood despite the divisiveness in the nation. 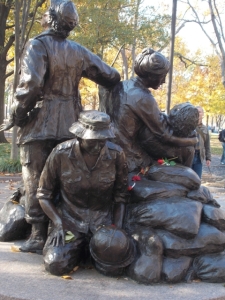 Red roses on the Memorial, a dying soldier cradled

Equally profound is the Vietnam Women’s Memorial, a poignant reminder of the role of women in the war and the tragedies they witnessed – and endured.

Trees here and everywhere along the Reflecting Pool are dressing for fall now: leaves gold and russet, twigs bare and boney

The Korean War Veterans Memorial becomes a larger-than-life platoon of 19 men in combat gear on patrol among low juniper amid rivers of polished granite, the group then reflected back onto a polished and etched granite wall, so that the 19 in the field become 38, in recognition of the historic 38th parallel. 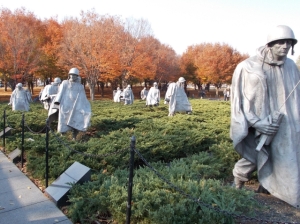 Grandest of all, perhaps is the World War II Memorial. An ellipse of pillars, it lies in the shadow of the Washington monument at the end of the Reflecting Pool.

Fifty-six wreathed pillars  recognize states and territories, and a pair of triumphal arches honor the Atlantic and Pacific theaters. It all suggests an ancient amphitheater, the plaza and  fountains within inviting people to play. And play they did.

A portion of the World War II Memorial

Reliefs of battle moments are mounted in bronze throughout the monument, but we did not find the inconspicuous engravings of Kilroy. There are two.

And finally, the Lincoln Memorial. Quiet, reverent, glowing at night. Crowded during the day with people on holiday, many taking family photos under the kindly gaze of Abe. Kids being kids, some can’t resist using the slopes along the steps as old-fashioned sliding ponds. 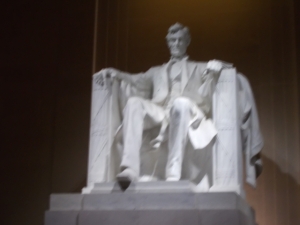 Serene above the milling crowds below

There are many moods here along the Reflecting Pool. Visitors to the Vietnam and Korean War memorials are meditative, thoughtful, hushed, even reverent, recalling memories of loved ones.

Memorials dedicated to events in the distant past evoke another response. The tone is lighter, visitors  playful, breezy. They may be awed, but the perspective of time has muted the pain of personal tragedy. 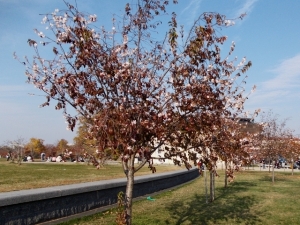 These fledgling cherry trees are not sure whether to bloom or shake off their leaves, or do both

I had one solo day to spend in the National Gallery of Art, a short, 10-minute walk from my hotel. Cold. No hat. No cozy coat. No scarf. No gloves. (Who packs winter clothes in 70-degree weather?). My pathfinder was gone. No bread crumbs to follow. The map didn’t match the roads. And all those old gray buildings with columns!

After 40 minutes of wandering in the vicinity of the Capitol Building, I stopped. Having started walking from New Jersey Ave NW, I was now crossing New Jersey Ave SW. My keen sense of direction told me something was not right. 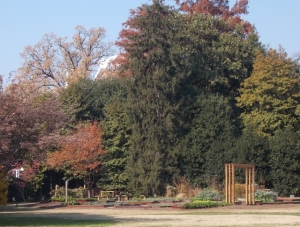 The White House vegetable garden on a sunny day

I retraced my route — I think — and lo, there was the Botanic Garden. I recognized it because it was the only gray building with wreaths. A place to get warm. A place to get directions to the National Gallery.

What began as a quick stop became a destination. A winter wonderland. Models of capitol landmarks created from woody plant parts were set among lavish banks of blooms. Hydrangeas –‘Nikko Blue’ and ‘Fuji Waterfall’ — and miniature pink and white poinsettias were punctuated by kaleidoscopic tropicals. And Euphorbia ‘Diamond Frost,’ an all-time favorite of mine, tucked in everywhere, frothy, fairylike stars filling voids, then spreading to create a tapestry of their own. Surely, this was a delectable vision of the Capitol in winter.

The display will be on until January 2, along with a miniature railroad and a huge, decorated tree not in evidence during my visit.

P.S Yes, in case you are wondering, I did eventually get to the National Gallery of Art, East and West buildings. However, before leaving each site I made it a point to get specific, very specific, directions to my next destination, including exact location of entrances. Helpers at Information Desks are so — helpful!