Posted on September 7, 2015 by aheronsgarden 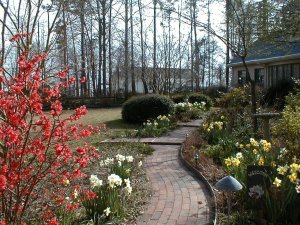 Quince and daffodils light up our path in March

The thing about spring is its order. There is a natural progression starting from bare twigs, bare earth to lovely bloom. There is space, precious precious space, for plants to expand and show off. Insects are usually a little behind the action, so the tidy growth looks fresh after waking from winter. I can walk in the garden and dream. This year plants will play nice. I can pretend not to see trouble between neighbors down the pike. 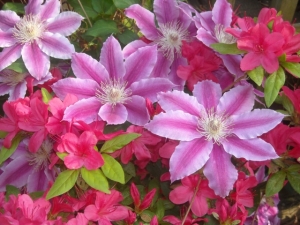 Late spring gives me a hint of what’s on the way. But who can deny this Dr. Ruppel clematis the joy of blanketing azaleas

The thing about midsummer is its disorder. Come midsummer the gloves are off and the wrestling begins. Leaning, pushing, smothering, hogging, twining and vining, grasping and clasping, there is no trick too dirty in the plant world. And who can predict a winner? Sometimes the tortoise in early spring becomes a hare-on-steroids in sunshine and heat.

That’s when a gardener must become not just a weeder and a waterer but a referee. To be a good referee you have to be as ruthless as the plants. I am not a good referee. I am languorous in hot weather and softhearted all the time, and I cannot make hasty decisions (though I can be rash when provoked by a renegade). The plants in my garden know this and they take full advantage. Here is the evidence. 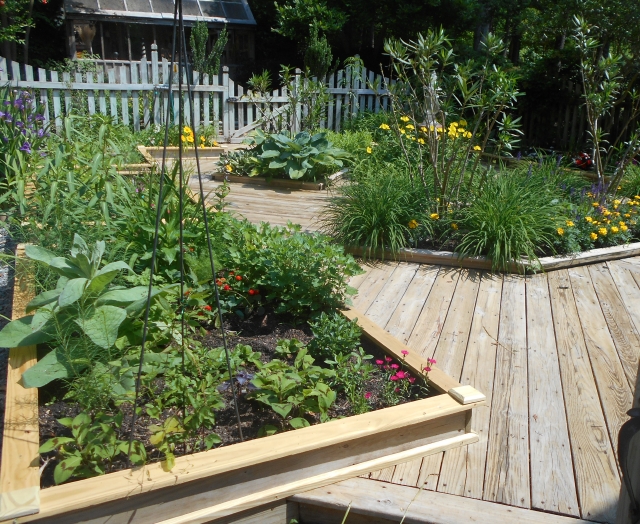 Aren’t the courtyard beds tidy in May? Missouri sundrops in the center bed will be cut down when they fade. Yellow marigolds team with purple salvia. True, mullein is outstripping its companions, but lantana Dallas red is struggling.  Purple Japanese iris in background with coreopsis. 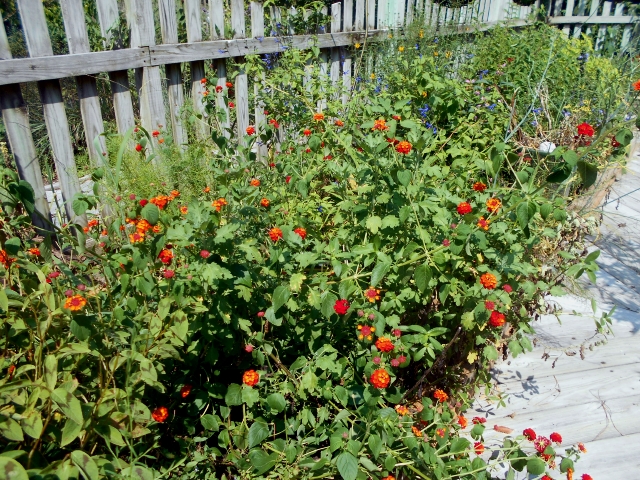 Courtyard beds in August: Salvia guaranitica black and blue near the fence, ripped out in spring but back in force, reveling with Dallas red lantana, a serendipitous combination. Unseen are pineapple sage about to bloom red, a treat for yellow sulphur butterflies, Japanese aster (kalimeris), chelone lyonii, blue lobelia syphilitica, swamp sunflower, and a few, sweet shy items that remain in hiding. 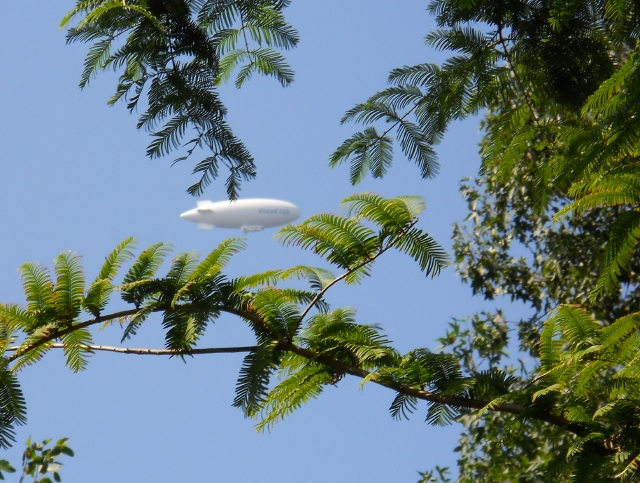 If this blimp were any lower he’d be tangled in foliage. 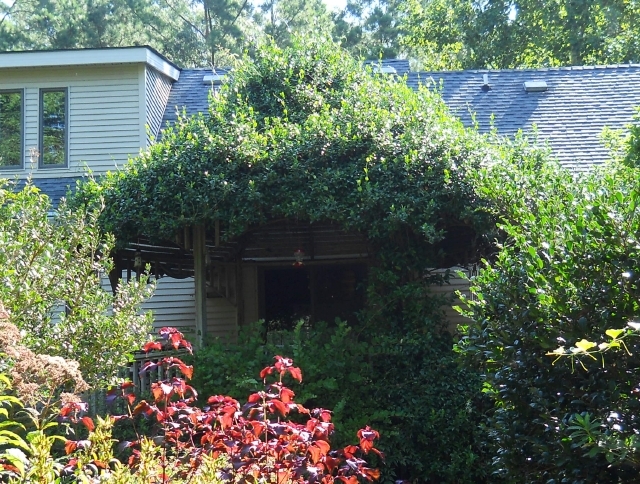 That’s confederate jasmine capping our gazebo. It methodically bumped out the sweet autumn clematis that reigned there for several years, whose wispy white blooms and heady scent bamboozled us into ignoring its grasping tendrils. The confederate jasmine, equally beguiling, came in for a second act and created its own roof garden out of its detritus. (We think a snake lived in its tangle.)

We could have continued to ignore the invaders, except the roof is slatted. Its hard-won turf wafted down onto us and our dinners. We don’t like dirt in our dinners. The hatchet came out.

PS We miss the vines. The naked gazebo is sunnier than we remembered and summer temps are 3-4 degrees warmer than official weather reports. Formerly, they were 3-4 degrees cooler. Stay tuned, both vines are trying to make a comeback. 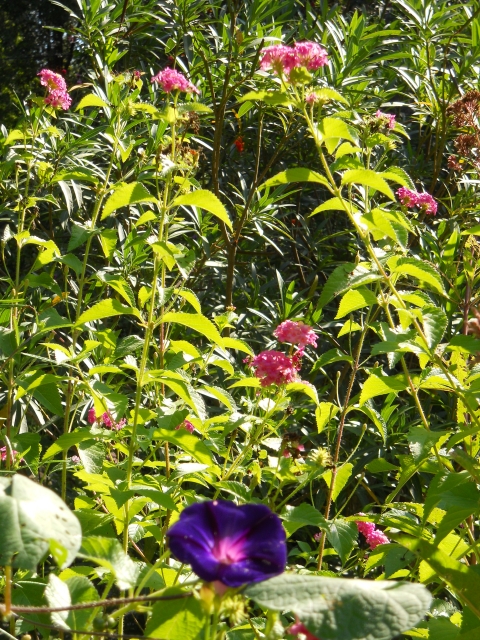 Grandpa Ott, what are you doing here? Still hanging around after all these years past when I planted morning glory seeds? Consorting with mullein leaves? Playing twine-around-the-rosies? Oh, you’re probably more an early-morning checkers fan. And still unpredictable as ever. I’d miss you if you didn’t show up somewhere each year. 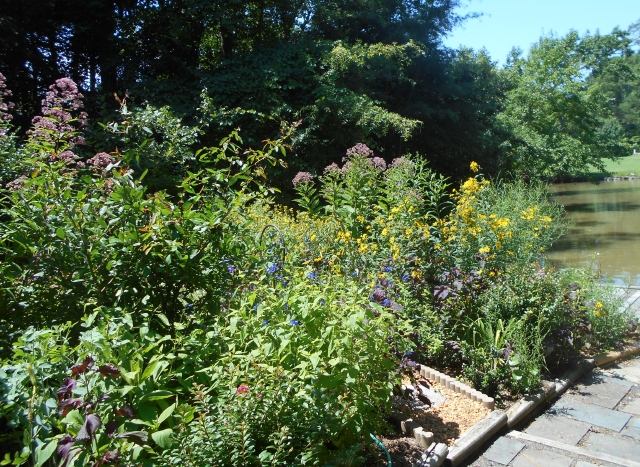 The bed that looks out on the slip is still manageable in July; you can see the path. Blue salvia guaranitica, which grows everywhere behind my back, yellow woodland sunflower, a wanderer, and purple joepyeweed and shrubby St. Johnswort in the background, manna plants for pollinators will be toughing it out with others. 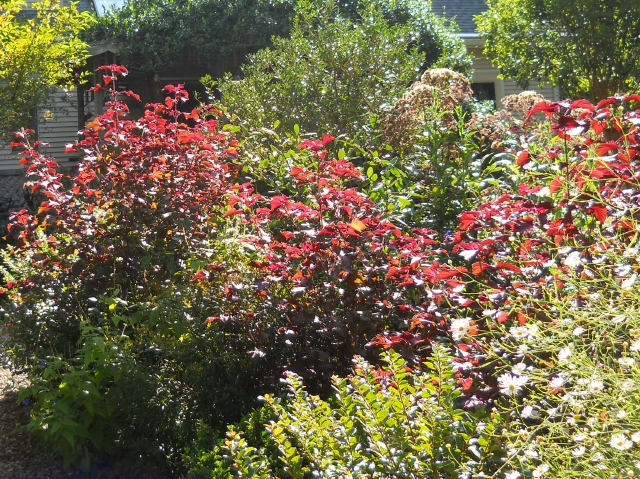 . . .It’s hot.  Joepye weed fading but perilla elbows in, its purple leaves a splash and its minty blooms a late-season dinner for pollinators. New York ironweed,  not pictured, towers, and boltonia , bottom right, adds a tangled grace note. The path, by the way, has disappeared. 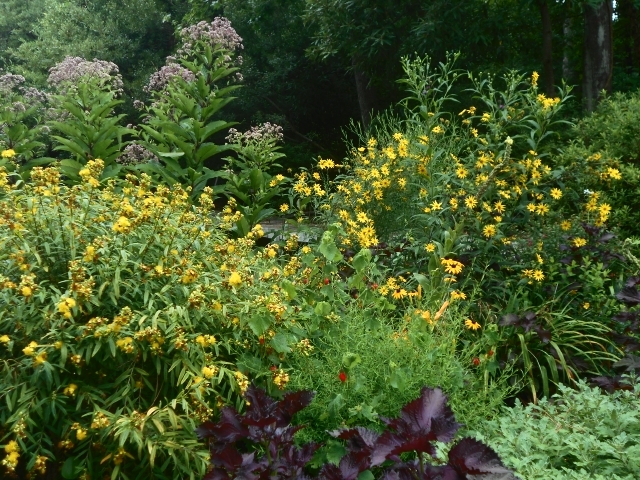 Another view. Shrubby St. Johnswort, foreground left, is a massive bloomer, can look untidy but the insects love it.  Woodland sunflower won’t be stopped. Wispy starry aster plucked from a roadside is coming along will bloom white  with red Turks cap hibiscus and purple-leaved perilla. Spent daylilies in the background once held court. Chrysanthemums bottom right are edgy but don’t flop when their button blooms add fire. (Hooray!). There’s a path between the St. Johnswort and chrysanthemums but you have to hunt for it. 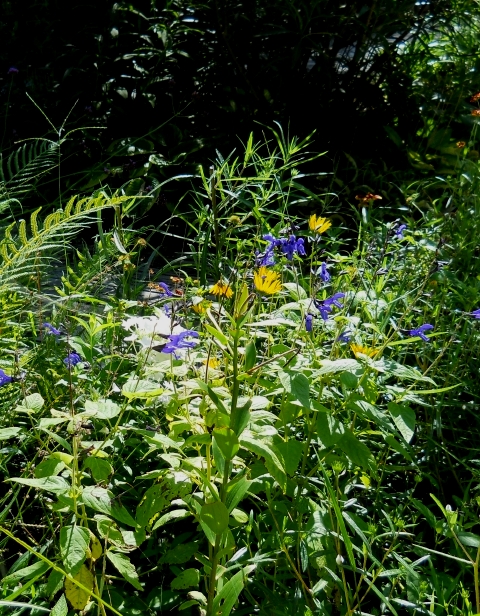 Salvia guarantitica dances with yellow woodland sunflower. Wonder who will do the leading. They’re both aggressive in our garden. 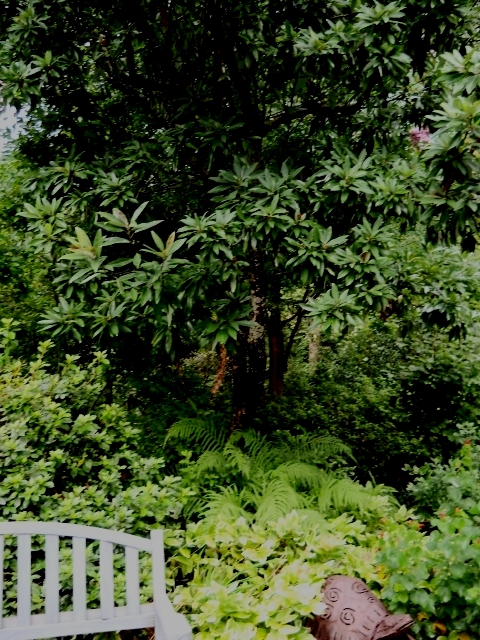 So much greenery from Formosa azalea (left), native magnolia, cheeky river fern, native deciduous holly (right), variegated solomon’s seal now faded from too much sun, and Sheffield chrysanthemums near term, our rusty turtle is working on an escape. 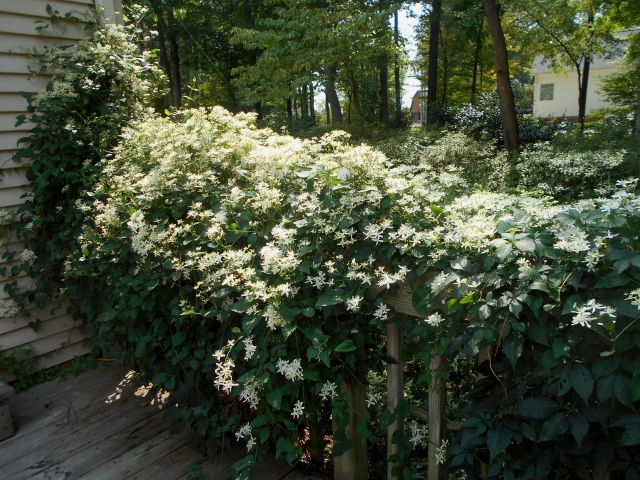 Sweet autumn clematis (ternifolia) may have been knocked off the gazebo, but it will not be stopped. It’s found its way along the porch rail and probably intends to climb to the roof. Underneath it is a tangle of confederate jasmine, crossvine and Virginia creeper. Below that tangle is our spring-blooming clematis and azalea (see above). Enjoy life now, you creepers and prowlers, for it’s off with your heads this fall (except for the spring bloomers). 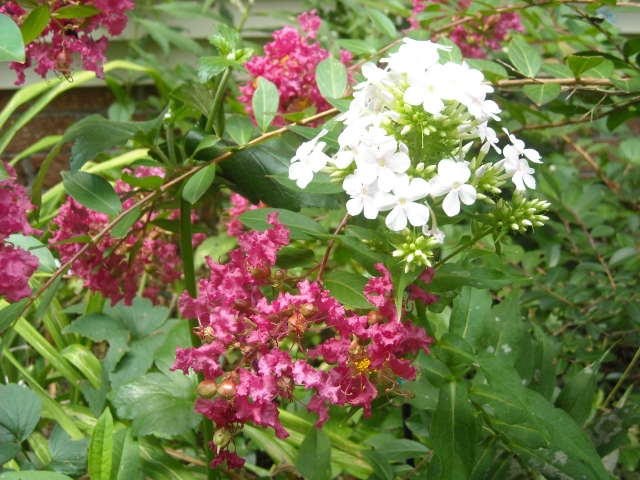 Sure wish I could take credit for some of these untamed antics. My, I’d think myself so clever. But, you know, I doubt my garden would be nearly as much fun if it didn’t surprise me with its ramblings. At least in this season of fading summer. Come late fall/early spring when I’m bending and swaying to wholesale scything of beds, and there’s that spring deadline, I may — or maybe not — sing a less spirited song.