Posted on February 13, 2015 by aheronsgarden

January. Disappeared. Wiped away. That’s why this is being written in February.

That’s not to say calendar days didn’t march by, one by one, as prescribed by the physics of the solar system. I’m talking here about garden days.

Let me explain. Each year, by summer’s end I’ve made a mental wish list, usually extravagant, of all we’ll accomplish during the good weather we will have in January. To be clear, nothing on the list smacks of the Boring-But-Essential: weeding, mulching, raking or deadheading.

This is instead a grand overhaul of the garden, most satisfying. Planting orphans that want out of their pots. Giving ne’er-do-wells a second, or a third, or maybe even a fourth try at making a go. (Do I ever give up?) Pruning opportunists. Thinning zealots. Revving up soil with compost. Mending paths.

Such ambition! It leaves me breathless. But it makes good sense. New plants will have time to settle in by summer and pruning is easier when thickets are naked. Soil is not frozen, so paths and beds can be tamed at leisure. There will be plenty of time later, in February, March and April, for the Boring-But-Essential. Won’t there? 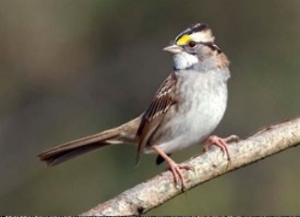 Some years we actually get to cross tasks off my list. Not this year. This year we lost January to drear: rain, cold, fog, wind, ice and soggy soil. Most days we barely glanced out the window. I forgot I made a list.

Come February the white-throated sparrows arrived. The Morse code bird we call them, though Old Sam Peabody Peabody Peabody is the usual handle. It was time I ventured out for an unvarnished look at the yard.

I discovered that while we were cowering indoors, January had left its signature on February’s deed to the garden.

Berenice Boddy is shining this month despite all that January has delivered, probably because she’s reasonably protected from full sun and wind.

She’s been previewing spring in American gardens for almost 70 years. A biting frost will nip at her flowers, but she always seems to have more in reserve as weather warms.

Like most camellias, she’s a slow grower and wants to reach for the sky.

Such a breath of fresh air in early spring, ogon spirea. January has coaxed into life hundreds of flower buds burgeoning under cloaks of green. In a month the shrub will be covered in tiny stars. Though the plant is technically deciduous, its tiny leaves come early, stay late. Ogon is tough, though it grows best in good soil and reasonable moisture. I know. Deer resistant, too, and will tolerate a haircut when shaggy.

New life for Louisiana iris! They were tired this fall when I cut them to the ground, but January was especially kind to them.

They drank mightily during all those rainy days and, being true water-and-sun lovers, they thrive to the point of weediness in our heavy clay soil, compost added.

Oh, but they are stunning bloomers, like clockwork in May, with hybridized Black Gamecock, a deep rich purple being our favorite.  The original copper species still graces many southern gardens. And, bless them, they are not attractive to deer.

Do you sense a winter theme running through this post?

I’m already looking for bare spots to plant the thinnings in spring, since chrysanthemums are one plant deer seem to universally avoid.

Not many predators can make it through a tangle of common flowering quince branches. Birds burrow in, safe, spend time loafing between trips to our bird feeders. January brings the first flower buds, which will open until May.

This one’s planted too close to the house — it was only supposed to grow 3 x 3, not a vigorous 6 x 6. Guess I shouldn’t have believed the books. Judicious pruning necessary annually. Oh well.

Buds come in and berries leave. There are still masses of berries on this Sparkleberry, a female deciduous holly, but their numbers have been thinning since the first of the year. Though we rarely see the mockingbird in winter — he never announces his presence — we have noticed him methodically stripping the shrub. So far, his ownership of berries is undisputed except by a squirrel who is not shy about checking berry-status regularly.

Kerria, now here’s a workhorse that even January’s nasty weather could not dampen. Its erect green stems brighten the garden all winter. Deer are ambivalent, choosing the newly planted or easily accessible for grazing.

Once established, kerria becomes so dense, we hardly notice a nibbled stem. Our plants grew from plucked-up stems that were thicketing. Butter yellow frilly flowers last a long time in spring.

This year’s winter garden décor for azaleas. Last winter it was Irish Spring soap-on-a-spike which kept deer away for most of the year, though squirrels nibbled the soap-sicles and occasionally dislodged them.

I’m hoping, when we trash this décor, the azaleas haven’t drowned in winter downpours. Once freed up, the azaleas will have to be sprayed till they bloom. After that, they’re on their own.

So, the hellebores are arriving despite nasty weather. They’re never-fail, charter members of the Old Postman’s Motto Club. Usually I fertilize them on balmy January days when I see stirrings. This winter I forgot I had hellebores. Tattered leaves still need pruning, one of those BBE jobs. They thrived in the shade of this high-and-dry-but-composted bed until we lost the hawthorn. Maybe the spice bush will begin to gallop and give them relief from summer sun. 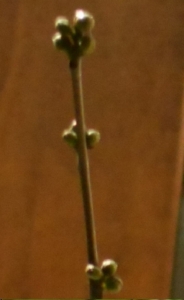 Spicebush flower buds plump and green but so small they are easily overlooked outdoors. I brought them inside to photograph.

In another month they will wrap the shrub in a haze of tiny yellow-green blossoms. These are followed by red berries in summer on female plants. Our sole male, pictured here because his buds are a soupcon bigger than hers, does the pollinating.

A walk in moist woodlands is made more delightful when aromatic leaves of this native are crushed to release their fragrance.

Bonus: The plant is host to the spicebush swallowtail larvae, whose parents we enjoy in summer. 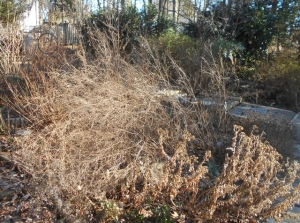 Tattered view from the window, stark reminder of BBE. I postpone deadheading and tidying to give birds food and cover and protect plants from deer. Fun to watch goldfinches balance on bobbing seed heads.

What I managed to cut down this fall I strategically arranged over seedling dianthus — after I was lax and found that deer had gotten first crack. Regrowth made it through January with flying colors, though. 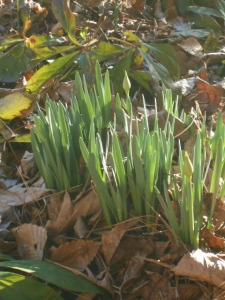 Daffodils! Now why do they wake in January? Who is thinking about daffodils in January? Surely, a little more slumber would bring brighter flowers.

Apparently not. They’re popping up on schedule, buds too, and as usual I’m behind hand.

Daffodils scattered in the sprawling bed that fronts the road should have been fertilized last fall, but there was too much spent foliage from wildish plants left for birds.  After my discovery walk in February we spent the first warm sunny day chopping and clipping and hopscotching over hopeful daffodils.

Christmas Jewel holly, heavy-berried, native to South Carolina, spinster female, may be hardy to zone 6. January let it be, so it is still a treat for our eyes, though apparently neither deer nor birds consider its soft foliage and bright berries treatworthy. Stringy growth gives it the gawkiness of a teenager, but we are hoping to see the pyramidal shape emerge in a few years. It should make a show at 10 feet by 3 feet.

February may have come in a little like a lamb, but lately it is baring its teeth like a lion. Taking lessons from January?