From Beach Sand to Clay Pots

Sandy soil at the top of our world

Our first home and garden was set on top of one of the highest hills on Long Island. It sat in pine barrens more than 100 feet above sea level, and the breeze was lovely.

In 25 years we never saw a puddle. Flooding appeared only in isolated news reports, and we wondered why people would choose to live so near water.

The soil was so sandy, a little boy asked if he could bring his pail and shovel and play on our beach.

Sure, we said, not yet understanding the challenges of gardening where drainage is so  sharp that the grass crunches when you walk on it after a rainstorm.

Only half of that default gardening term “moist but well drained” applied here, and plants reacted with appropriate wilting or stunting or worse. Amendments like compost drained away with the water. Stingy, that soil was. 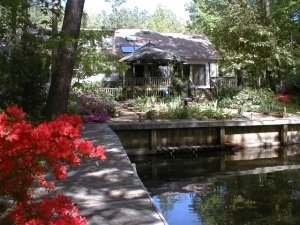 Twenty years ago, as you can see, the canoe platform was visible; today it is below water

Our current garden is maybe about eight feet above sea level on a canal off Albemarle Sound.

Lately we have learned that it is part of a much larger land mass that geologists say is subsiding, or sinking, even as sea level rises.

In the past two decades, we’ve sloshed through pond-sized puddles and sympathized with Noah more than once as floodwaters surged during hurricanes.

(So much for tsk tsking about living in flood zones.)

Sometimes groundwater is so high we can’t dig a dry hole. When it rains toads and frogs it turns into slime that sucks us in and mucks our shoes.

The soil is modeling clay, smooth and slabby, and we have molded fanciful bowls from it. (Note to Potters:  No need to worry. We’re too busy sloshing and shoveling to compete.)

During droughty times it cracks, and then we imagine that we are in the Sierra Nevada desert with Bogart and banditos. 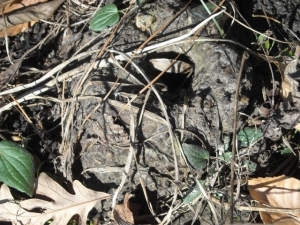 But we knew none of this when we began clearing concrete construction debris from the property after we moved in.

After a while, we began to suspect that all lumps were not concrete. So we hurled the strange gray rocky clods at pine trees to see if they would break up.

If they did, they stayed with the land. If not, they were tossed in the concrete pile. We have always wondered how much actual concrete we threw out.

It never occurred to us that the combination of impervious clay and a high water table would create the perfect storm in our garden.

Happily, we dug nice wide deep holes for our hopeful, mail-ordered fruit trees (which were not appropriate varieties for our area, but that’s another story).

We filled our textbook holes with good stuff that came in bags and we sat back and tasted the fruit.

Instead, the fruit trees began to die off. Ah yes, our Cooperative Extension agent told us, clay takes a long time to drain.

You’ve created soup bowls in the clay. With so much water taking the place of air in the soil, plant roots drown.

That was not such good news.

Local nurserymen who knew the lay of our land sympathized.

They suggested creating raised planting beds, a practice that was gaining popularity in the eighties.

Alternatively, we could set single plants on top of the ground and mound soil around them. The thought of a garden with berms and mounds was not visually appealing.

Isn’t there supposed to be something called “top soil” here? I whined.

Apparently not. Needles from our spindly 15-year-old pine trees were not inclined to decompose with any speed. Instead they lay in thin, stiff mats on top of the clay.

The good part? We had no weeds. Fifteen years would go by before we had a single dandelion.

Never mind, we said with the dizzying optimism of the unschooled. We’ll make that dirt good. We’ll add some peat moss. It’s supposed to loosen the soil. And it’s organic. That must be good.

We brought in so many bales of Canadian peat moss for an 8 x 25-foot bed in front of our house that I began to feel guilty about tearing up northern peat bogs. (Not that guilty.)

We borrowed a rototiller and blenderized the peat with the muck until we created a beautiful raised bed. Were we proud.

Like good gardeners, we sent the goop away for a soil test. The test came back saying the soil was 99.3 percent mineral. That would be .7 percent organic (for the mathematicians in the group.)

No organics! After all that Canadian bog-robbing.

The raised bed turned out to be a mirage. The fluffed-up soil settled back down to a soggy lump after a few rains.

We planted in it anyway.

The scrawnies that struggled were more embarrassing than the drowned dead and gone. Despite all our work, we hadn’t dug our garden out of the soup-bowl syndrome.

It grew lots of weeds, which gave us hope. Descendants of those buttercups still appear each spring. And it tested organic. That was progress, we thought. We had been told that adding organic matter like compost was the best way to improve drainage because compost holds so much water for release later. 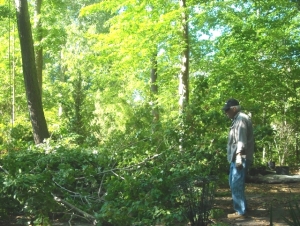 Do I really have to grind all this?

We became owners of a rototiller and a chipper-shredder, and we (Bob) kept them in action.

Every bit of garden waste went into the chipper-shredder and back on the land.

Then we discovered we were recycling weeds. Sigh. The weed seeds loved our mix. So we sorted garden waste from leaves and twigs before shredding, kind of like separating dark socks from white shirts when you’re doing laundry.

We added manure gussied up in bags. We collected the raw stuff from friends who had chickens, horses and sheep. After it sat a while we turned it into the soup bowl.

We brought in pickup truckloads of “cotton dirt,” fertile leavings from cotton milling, known for giving plants a temporary shot.

Sometimes we added sand, which could have been dicey because sand can turn clay into concrete unless you add generous helpings of organic matter. We were already knee deep in piles of ground leaves, twigs, branches so that did not apply to us.

Grinding hurricane debris would have done wonders for soil, but it was just too much. . .

Occasionally we paid for topsoil of questionable quality.

One day the driver of a large truckload announced he couldn’t put it where we wanted because “This truck don’t dump so good.”

We switched to potting media produced locally. Our reliable ’92 Ford Ranger trundled it into our garden by the cubic yard and this seemed heaven-sent.

We wheedled piles of grindings from tree-trimmers doing work for the power company.

We thought about chipping fallen gifts from hurricane Isabel, but the sheer volume overwhelmed us, though the combination of leaves, bark and branches makes delicious mulch that morphs quickly into compost. 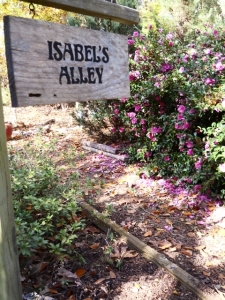 When we got around to establishing paths, we topped them with peanut hulls carted from a distant peanut processor. A nice touch that is sometimes mistaken for river rock.

The hulls decomposed so nicely against damp soil we figured we were missing the boat and began using them on beds.

In the fall we piled leaves on beds and let them decompose in place. If we were ambitious and wanted the beds to look super-neat (not high priority), we shredded the leaves before dumping.

Our most successful venture turned out to be a sand-compost mixture we experimented with for a deep raised bed.

Except — without clay, it drained and dried too quickly. Well, we had the perfect remedy: add some clods of clay. Were we jumping back into the frying pan?

Heavens to Betsy, after a lashing rainfall, the clods melted and floated to the top and created cement icing. We sighed and scuffed them back in again and hoped they would behave. And yes, eventually the clay became one with the original mixture.

In our quest to raise beds we became brick layers

A second reasonably successful bed was planted where an old compost pile had been worked.

Should’ve planned on movable compost piles right away. Oh, and, incidentally, we added builder’s sand to that bed also, and to others along the way.

Still, no matter what we did, for a long time it was pretty common for heavy rains to float clay to the top of a bed and mire us in muck.

Early on we planted a grouping of three toddler-size Burkwood viburnum. Soon we began calling them Papa, Mama, and Baby. Papa was growing big and healthy, Mama was holding her own, and Baby was languishing.

Most of what we added seemed to vanish under relentless heat and dry weather.

Or, the bits and pieces that remained would be glued into slabs of hard dry clay and tangled plant roots, or cemented into layers that we had to chop through.

If we cut down trees, we were left with quagmires where once their roots had moderated moisture in the soil.

And yet, doggone it, when we pulled beautiful, healthy weeds from beds with motley soil combinations, their roots chose to cling to — you guessed it — clods of clay.

You may get the feeling we were clutching at straws, and you would be right.

One day I was digging in a flower bed in daughter Susan’s New Hampshire garden. The soil was dusty and flyaway, very different from our stolid clay. Terrible, I said. You’ll never get anything to grow in this.

(Do you think this might be the pot calling the kettle black?)

Son Steven, who is a soil and drainage expert, told me that the unruly dust was silt. Silt is an important ingredient in loam, he explained, that precious combination of sand, silt and clay that every gardener covets because plants love it.

I had never seen silt in our gardens, but when I saw how Susan’s garden grew, I, too, coveted that dust that reminded me of velvet when my fingers played with it.

We would never have velvet soil.

But a funny thing was happening during all these years.

That gooey, pasty, concrete clay eventually began to crumble. And one day, twenty-five years after throwing those clods around, we looked at that dirt and said, “This is good soil. This is really good soil. Other people said so, too.

“We were pleased and quietly proud.

But, as they say on Awards Night, we couldn’t have done it without lots of help.

From plant roots pushing their way through the clay, and from their dead, shed leaves breaking down.

And from a quarter century of time. Clay and compost and sand had homogenized, molecule by molecule until they merged seamlessly.

This doesn’t mean we can take a vacation. Like all soil, our soil will need rejuvenation from compost and/or mulch.

Snow in April? No, even fallen petals from our crabapple will help improve soil in their small way

And it doesn’t mean that the basic character of our soil or drainage has changed.

In many places, the clods are simply smaller and blacker, stained from compost.

Good soil is only a few inches deep and planting holes still fill with water.

But that’s fine. We accept what we have. We work with it, plant the willing and cull the weak.

We have learned that some things, like building soil, you just can’t rush. You have to trust and be humble and patient and respectful.

Next time we’ll skip all of the above and grow our garden on an abandoned horse farm with loamy soil. We’ll nuke the weeds with black plastic in hot sun and hire a nursery man to put down store-bought mulch and our plants will be happy as larks right away. Maybe.