A Trail of Discovery 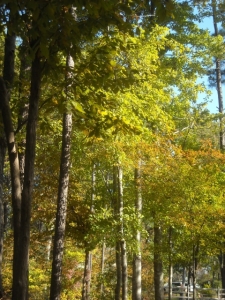 Coins of gold, ready to fall

I began to figure it out about 40 years ago, when our kids were young and we thought we were still the bosses in the family. We were middle class America living in classic suburbia. If your lawn wasn’t mowed in summer and raked in fall, you were positively unamerican.

To keep us neat and patriotic, the town generously delivered free packages of leaf bags to residents. Then the town would designate special days to collect the stuffed bags which we dutifully lined up on the sidewalks. Special trucks would whisk said bags out of sight to be deposited, where? In the next town, for all we knew or cared.

Every fall, raking leaves became a family affair, a kind of Norman Rockwell moment for our family. One year the kids raked with unusual joie de vivre. They seemed to revel in the drudgery, raking a big pile into the center of the lawn. We smiled, a bit smugly I guess, at our bright and beautiful and obedient and efficient children. 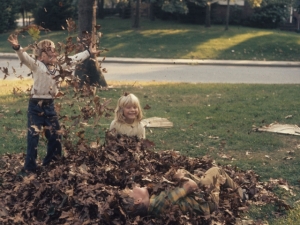 Note the tossed rakes in the background, forgotten

We’ll win this one hands down, we thought, savoring the idea of late-afternoon leisure moments. Sudden bursts of outrageous giggling brought us back to reality. Raking leaves wasn’t that much fun. What in the world was going on? There they were, our bright and beautiful and obedient children, joined by one of the neighborhood kids, burrowing and tumbling and rolling in that mighty pile of leaves they’d just raked, that pile of leaves that had been one step from bagging. There they were, scooping and tossing leaves hither and yon. When the fun was over, they raced off to another yard. Darn it, they’d outsmarted us again.

The two of us were left holding the flimsy, slippery, over-sized bags. Wait, we said, there’s a better way. How about just sweeping the leaves into the sandbox? This was a play area so-named because the soil looked like beach sand. The kids hardly ever use it these days. They can play with the leaves there if they want. The lawn will be respectable again, and we can toss the leaf bags. 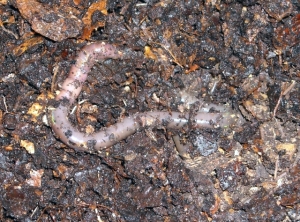 Earthworms are musclemen when it comes to breaking down organic matter into soil, but the real necessary work is done by microscopic microbes

Not sure how much the children ever played in those leaves. But a couple of surprises down the road made me think that we were on to something bigger than simply scrapping leaf bags.

It was last minute on a cold January morning. I was chopping through frozen earth to collect soil for a science program I was about to teach. Sheer futility. In desperation I tried the old sandbox. Maybe there was some loose sand lying around. I was ecstatic. In no time I had a pail of dirt. My savvy program assistant was ecstatic, too. She recognized it as wonderful fertile soil. To me it was simply dirt that had saved the day. 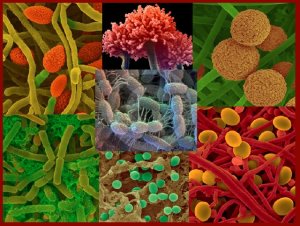 The following spring a peony bloomed in the sandbox. A peony! I’d been trying to grow peonies for years, but even with amendments our sandy soil was too stingy. In a fit of pique one fall day, I had thrown the smallest and worst looking tuber into the sand pile.

After that those dry leaves became gold coin to me. Funny thing is, I don’t recall ever using that wonderful soil beneath them. I would go back and look at it and rub the velvet between my fingers and watch the worms and centipedes, but it seemed too precious to cast around a garden.

I was so protective of the miracle in the sandbox that I instructed our son, whose chore it was to mow the lawn, not to mix grass clippings with leaves. No contamination, I said.

Who knows what a 16-year-old is thinking? If he even listened to me, he probably thought I was a nut case and wouldn’t remember a word of what I’d said. 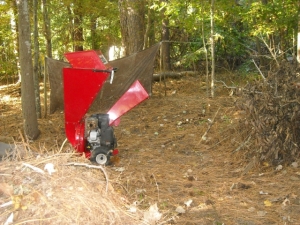 Well, I did remember, and I was appalled when I saw my leaf fortunes tainted with grass clippings. But I never said anything. With teenagers, life is already too complicated. Good thing, too, because the miracle in the sandbox worked double-time. I had accidentally discovered the secrets of composting. Later, after Earth Day, I would put a name to the process.

I had discovered something else. There were no longer any weeds in the sandbox.

A whole new way of gardening opened up to us. Being young and efficient and impatient, we vowed to streamline nature’s operation. So we speeded the process up by first shredding leaves in a noisy machine, then spreading them on garden beds. This got rid of the piles fast, and it modestly improved the soil. But weeds still popped up. 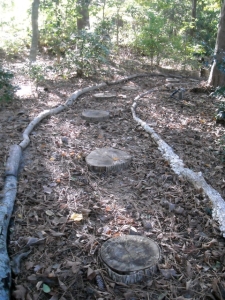 When the stepping stones are hidden by piles of leaves, we rake them onto the camellia beds on either side of the path

We are older now, slower, a little more patient, but a little less tolerant about doing unnecessary work — though we still do it – so we’ve changed our approach. Today we do not rake leaves off garden beds. We let them be. When it gets to the point that we are scuffing layers of leaves along paths we sweep them onto garden beds, atop the leaves already there, loosely arranging them so they look like somebody cares. No hauling, no grinding, no pails, no wheelbarrows. The first rain flattens and tidies them.

I must confess that I am having almost as much fun raking as the kids did years ago, though we do make one concession to “work.” When we hire lumberjacks, we ask them to leave the grindings from trees in a pile in our yard. We must shovel and haul and spread, but what a grand mulch they make! 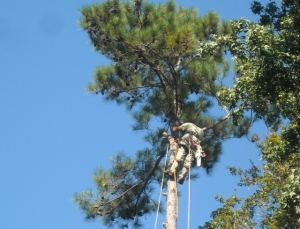 Grindings from tree-cutting, a combination of green leaves and brown wood, generously spread on our clay, creates wonderful soil in a season

We never need to tote bags of store-bought mulch now. Weed seed can’t find purchase to sprout. Our garden beds are rich with compost. And our plants are healthier and more resistant to predators. What more could we ask?

Recently I spoke with a gardener who is establishing plantings under hundred-year-old oaks. You must be having a terrible time, I said. Those oaks steal everything: water, nutrients, sunlight. On the contrary, she replied. For a hundred years their leaves have been falling on that ground. The soil is so full of life there’s more than enough of everything to go around.

Our own ancient oak drops copious leaves each fall, and sometimes tree-size limbs, too