A rainbow of reds

Michael said he would think of me whenever he saw a hydrangea in bloom.

I will never forget the hydrangeas of Ireland. They seduced me. And to think it was only by chance that we saw them in full and glorious bloom on that trip.

They were voluptuous. Huge blooms hid beautiful deep green  foliage that sometimes took on a yellow cast as it aged. 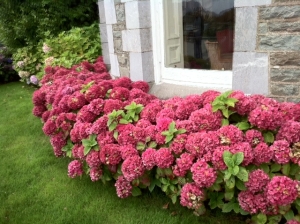 Reds massed around the turret of a castle B&B. Photo by Michael

Lace cap blossoms the size of dinner plates, sterile flowers around the edges so large, the “lace” almost covered a “cap” of tiny fertile flowers. Mophead blossoms so luscious and full they would take center stage in any Victorian garden. 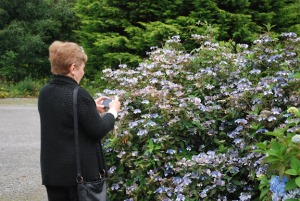 Caught in the act, trying for a close-up. Photo by Susan

But I could never quite capture their magnificence.

It’s just about a year since Susan and I visited Ireland, and I still have sharp memories of hydrangeas that seemed to be everywhere —

—  on manicured castle grounds, on roadside lots sharing space with fuschias that grew wild, in private gardens, in abbey courtyards. 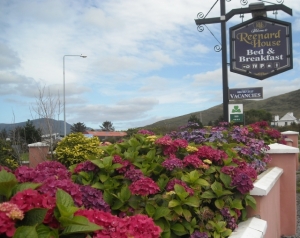 I shot two dozen pictures here in four minutes. A record for me

One morning, on the way to the ferry that would take us to Valencia Island I happened to glance down a side street. There, behind a solid pink wall was a hydrangea bonanza that took my breath away. A hedge of them in bloom on the grounds of a bed and breakfast. A whole collection of them. Would we have time to make the detour and take some pictures?

I felt palpitations as I took photographs, working quickly, almost frantically. I wasn’t worried about missing the ferry; that possibility hadn’t entered my mind. My eyes and my camera were overwhelmed with this floral sensation. 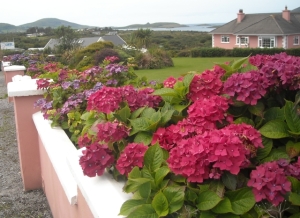 A fine view from any window of this B&B, if not hydrangeas then hills and water in the distance

But photographs weren’t enough. I reached for a stem. Oh, the temptation.

Never mind the idiocy of carrying a slip, or two, or maybe more, around in a car for a week. Never mind telling fibs on the forms we would have to submit to customs.

These were prizes I had to have. In fact, I probably already had these varieties at home, but the grass is always greener on vacation. 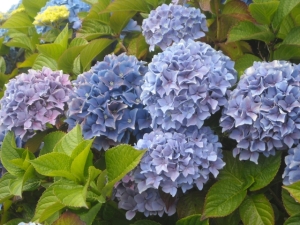 A medley of blues

Saved by the voices. Uh oh, had anyone seen me reaching? The owners had come out to see what we were all about and were chatting with Susan and Michael.

They were so pleased when we told them we were admiring their hydrangeas. Had they spotted my wayward fingers? Apparently not. There were no visual pat-downs that would indicate suspicion. 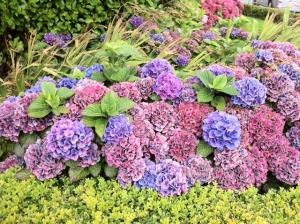 Near the edge of the road. On its own? Photo by Michael

Do you know the names? I asked. No, they said, and it didn’t seem to matter. Nobody we met seemed much interested in knowing the names of their hydrangeas. They simply enjoyed their beautiful, dependable blooms.

We thought we had grand hydrangeas at home. We had spent years coddling them. When they fussed, we dug and replanted them, pruning, fertilizing, watering and mulching.

We watched them grow, and we were pretty proud of them. But hot dry summers take their toll on hydrangeas. We never realized how pinched they looked until we did mental comparisons with the grand hydrangeas of Ireland.

Still blooming fierce, though the pretty stone house is vacant

And to think we might have missed them. We had booked our trip into Dublin for June, with plans to take tour buses cross country. Threat of a strike by Aer Lingus and a stiff bump-up in tour prices caused us to push back to August and consider alternatives to organized tours.

So we hired patient Michael Hennessey to chauffeur us around Ireland. Do you think a bus driver would have taken a detour so I could take these pictures?

Or go out of his way to find a school crossing sign so I could photograph it? 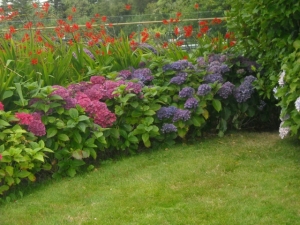 This mix growing with crocosmia at a castle turned B&B

Just to set the record straight, we did not just do hydrangeas. We did what all visitors to Ireland do. Connemara. Galway. The Burren and the Cliffs of Moher. The Ring of Kerry.  Cork. Kilkenny, County Wicklow, Dublin.

And more. Michael took us to some of his favorite spots. We never quite knew what he would come up with. Eight hours after we set foot in Dublin we were visiting an off-beat haunted castle and leaving with some pretty big holes in our initial skepticism.

Later in the trip he would ask, How would you like to visit an abandoned rock quarry?

An abandoned rock quarry? Well-ll, that sounds like an adventure, why not? The visit was memorable. Scenic views, a wealth of history, wildflowers cascading down a hillside.

And a leprechaun who kissed me on the cheek. (To you, dear reader, he might have been a frail old man with a twinkle in his blue eyes who helped me up a stone outcrop even as I tried to help him climb down, but to me he will always be a leprechaun.)

Of course, my leprechaun did not cobble shoes, as they do in Irish lore, but he twinkled nonetheless.

Castle with a genu-wine crapper. Note chandelier in the loo

More of Michael’s favorites—an isolated, crumbling abbey, a favorite bookstore, an ancient stone circle with dolmen and wishing tree. As we looked at the trinkets and tags left on the tree, we could only imagine what the wishes might be.

And I can’t forget the gardens we visited. Kylemore Abbey and Powerscourt were lovely, each in their own way.

Each day we were immersed in centuries of Irish history and lore.

Sharing a pint of Guiness and some laughs in the evenings during dinner at an inn he’d booked for us always managed to rekindle our energies.

A ‘Blushing Bride’ in Ireland? Photo by Michael

A month after we were home, after we had unpacked our souvenirs and our memories, Michael was taking pictures of hydrangeas, still in perfect bloom in September.

Later he would send word that he had planted one of his own. 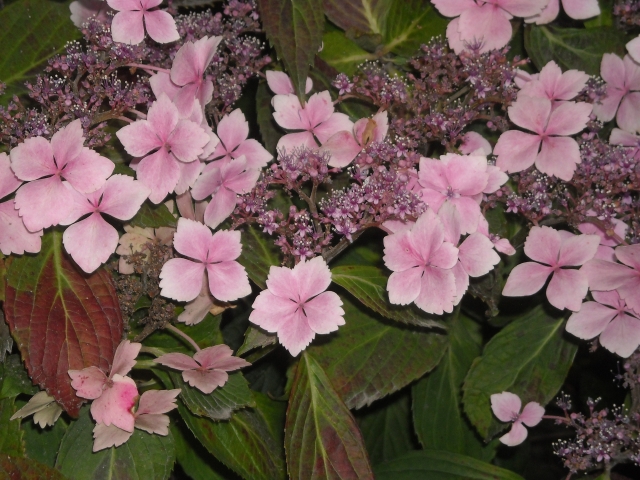 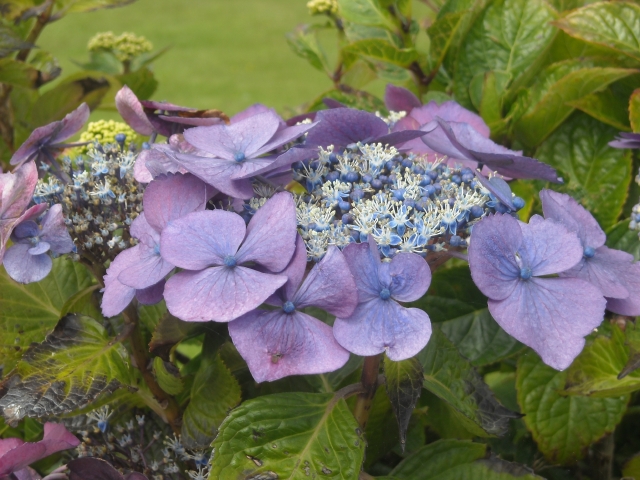 The Hydrangea that Climbs

Why Don’t My Hydrangeas Bloom? Part I

Putting the Blue in your Hydrangea Blooms

Letter to Lovers of the Blue

2 Responses to The Grand Hydrangeas of Ireland