It began in earnest many years ago with a Master Gardener class on how to propagate plants by taking stem cuttings. I must have been having a relapse of Empty Nest syndrome then. Oh, the possibilities!

Spirea shibori, one of my first successes

Bob the Builder was not so interested in propagation at the time, but he was enthusiastic about building a 4-foot by 8-foot bed for me to fill with little stem cuttings. Do you know how many stem cuttings can fit into a bed that size? I can’t count that high. What a family we would have!

I was hooked. Never a kitchen goddess, now I had an excuse to play hooky. Taking cuttings on a glorious spring day was much more important than sweeping the floor or weeding flower beds. If, on that rare occasion, I felt I needed to justify chopping big stems into little stems, I called it selective pruning.

Any plant was fair game.

I began to fill the garden with plants for pennies. With the money I saved I could buy even more plants and save even more money by propagating the new plants. Hydrangeas, azaleas, spireas, was there no end to this multiplication? I became so addicted I was designing garden beds around new cuttings before they ever grew a root.

How could I resist this lovely hydrangea?

Now I could raid plants from gardens of friends and family, roadside verges, old fields, even parking lots.

I sank into moral depravity. I became a thief. Sometimes my sister, who carried a large purse, was my accomplice. This was good, because if I went to jail, she could keep me company.

On a visit to New Castle, Delaware, the two of us spotted a stunning red hydrangea in a garden enclosed by a wrought iron fence. One luscious stem reached through the bars, beseeching me. We must rescue this innocent from its cruel bonds, I said. My sister was right on with her satchel, but I was woefully unprepared for such rugged heroism, and there was no phone booth nearby.

Furtively I rooted around my purse for a tool. Aha! A manicure scissor! Furtively, my sister and I scanned the neighborhood. No bystanders pretending not to watch. No fluttering curtains behind open windows. Satisfied we were in the clear, I made some quick, if ragged, cuts. My sister caught the drop, and we made a clean getaway. 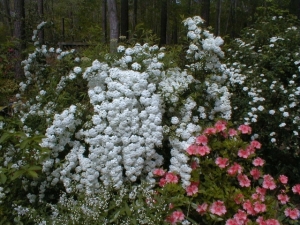 Double reeves spirea, a slip of a gift from campus, now full-grown in our garden plays off a salmon-pink azalea

Success begat confidence. Neither of us had made conscious plans to repeat the stem-snitching, but we seemed powerless to stop it when we got together. The next affair took place on a college campus in Virginia where we were overcome by fountains of white-blooming spirea. Not a moment’s hesitation this time. We replayed the New-Castle caper with a precision that astounded even us, and we knew then that we were on our way to becoming hardened criminals.

We never felt a twinge of guilt. Our motives were pure. We were noble. We were releasing plants from their bondage (though, curiously, they seemed not to be aware of their plights), and if they made it into my garden, well, there they would thrive, wouldn’t they? My sister was even more selfless. She lives in an apartment in New York City—with a charming garden, it’s true, but much too small for such grand shrubs. She willed the booty to me. 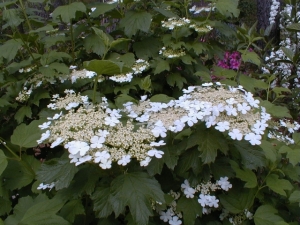 Cranberry viburnum, its spring bloom as luscious as its fall berries

One bright autumn day, a handsome viburnum lush with bright red berries next to a fence in a corporate parking area beckoned to me. This time Bob was partner to the caper. He does not carry a big purse, but he does have a sharp knife. Amazingly, nobody was doing surveillance. We could take our time, choose our cuttings with care.

Well, that wasn’t exactly the case. Once we brushed against the fence, we learned later, security cameras began to roll. Apparently a couple of geezers skulking around a plant did not constitute a serious threat to corporate security. We escaped to enjoy another stunning addition to the garden.

I’m sure there were other escapades, but you can’t expect me to remember them all.

Do you suppose they mean ME?

Now Bob was snared. Failures disappointed us, but they didn’t stop us. We developed a nothing-ventured-nothing-gained philosophy. Successes were grand, and they fed our addiction.

The garden was getting too crowded with plants, and we had just the solution. We would share!

We shared with just about everyone who owned a trowel. Everyone was so enthusiastic about our offerings. At first. After a while, we got the feeling, just a feeling, mind you, that people were backing away when we proffered plants. Hm-m. This called for a different strategy. 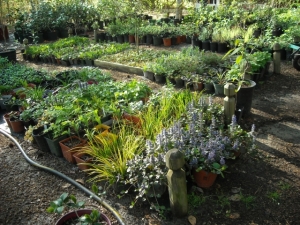 Our nursery overflows with offspring

So, on occasion, we sold to the public. We sold the young plants at garden days in malls and at fairs and garden shows. In 2003 we hosted a sale day in our garden and have continued the tradition. Here, people can see mature plants in a garden setting before buying and, because our prices are reasonable, they can experiment with new plants without reaching deep. 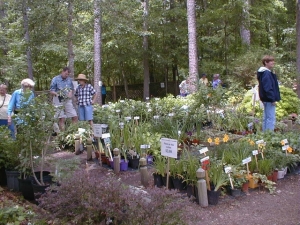 The proceeds finance projects sponsored by our local environmental group. Some of these have included multiple printings of our educational publications, taxidermy for a park visitor center, scholarships, opposition to a proposed military landing field, and contributions to environmental advocacy groups in North Carolina.

So, what have we learned during our years of propagating?

That there is infinite variety and beauty in the plant world.

That each plant has it own particular requirements and, yes, temperament.

That it’s all about juggling the big four: temperature, soil moisture, humidity, and light.

(Plus an X factor we haven’t yet figured out.)

That our failures have been the best teachers.

That it’s a lot quicker to dig and divide.

That low-tech propagating can be the greatest suspense story going.

That we are still hooked on propagating with stem cuttings.

That it’s all one grand experiment.

2 Responses to Plants for Pennies